A convertible which is practical for day-to-day usage, the Audi A3 Cabriolet!

It was an unusually lazy Saturday morning when I woke up and remembered that I had a bright little car parked in my driveway, waiting for me to come and take it out to stretch its legs. I quickly got ready and headed to the car, with amused looks from neighbours since they found the yellow colour quite fascinating. Yes, I'm talking about the updated Audi A3 Cabriolet which now gets tweaks to the styling and of course, just like some other Audis, comes with a downsized petrol engine. The older Cabriolet was quite fun to drive, thanks to the 1.8-litre TFSI engine but will the smaller engine live up to the expectations?

Motor Quest: Audi has been downsizing their petrol engines since a while now. The new generation A4 gets a 1.4-litre petrol engine and so does the A3 facelift, which earlier used to get a 1.8-litre unit. Now, even the A3 Cabriolet gets the same 1.4-litre TFSI unit which is also shared with some other cars in the VAG line-up. 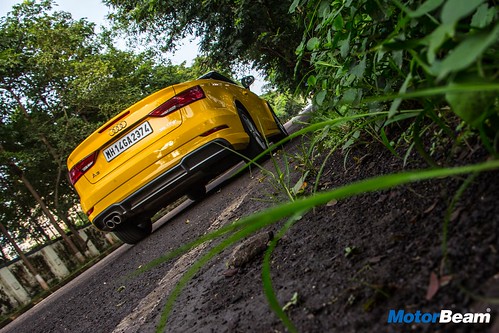 The A3 Cabriolet is a looker, with this yellow colour complementing it more

Exteriors – Audi has made some changes to the exteriors in this mid-life facelift of the A3 Cabriolet. First up, the car comes with redesigned front and rear bumpers with bolder styling. It also gets the typical hexagonal Audi grille. Then, it also gets optional Matrix LED headlamps. The side profile remains largely unchanged save for the rather boring 16-inch wheels, while at the rear you get tweaked tail lights too. The dimensions of the Cabrio, however, are similar to the older model. The canvas roof comes in a contrasting black shade and can be opened/closed at speeds of up to 50 km/hr and the whole opening and closing operation does look dramatic. 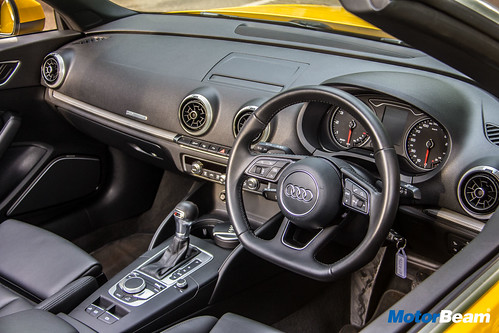 While minor changes have been made, the interior continues to remain functional

Interiors – The interior layout is again similar to the older A3 with some changes here and there. You get a 7.0-inch display for the updated MMI system that also comes with navigation and Park Assist with a rearview camera. The steering wheel is now a flat-bottom unit. While the earlier model had a black and beige layout, the current A3 gets an all-black theme. Audi also offers 5 airbags, ABS with EBD and a dual-zone AC. While the cabin of the car isn't too large, you can't call it cramped either. 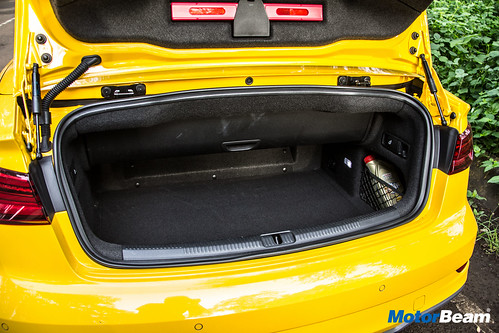 Boot space is decent enough for a convertible

Being an Audi, quality of materials used everywhere is expectedly top-class

At the front, space is pretty decent and the seats have very good comfort and support levels. Surprisingly, you don't get electric adjustment even for the driver's seat! The steering feels good to hold and ergonomics everywhere are spot-on. The doors open wide and getting into the rear isn't much of a task since the front seats slide all the way ahead. Space for rear passengers is a bit limited though but average-sized passengers won't have much of a problem on not-so-long drives. Boot space isn't really huge but more than enough to hold bags for a weekend getaway. 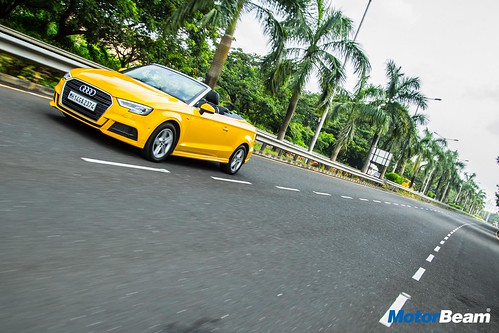 The smaller engine isn't a slouch, in fact performance is good for cruising

Performance – Replacing the older 1.8-litre TFSI unit is a 1.4-litre engine from the same family. This smaller engine produces 150 HP of power between 5000-6000 RPM and 250 Nm of torque between 1500-3500 RPM. Compared to this, the older powertrain was churning out 180 horses. Mated to this petrol mill is the same 7-speed transmission. When you fire up the ignition, the engine feels super refined and there are hardly any vibrations filtering inside the cabin. Driveability in the low-end is similar to the older powerplant and the car feels very responsive with hardly any lag. The mid-range is also peppy enough for quick bursts of acceleration but if you want to go all out, you will definitely miss the grunt of the older engine, especially near the redline. While the older drivetrain used to feel very punchy at all times, this one comparatively seems to be running out of breath at high speeds. 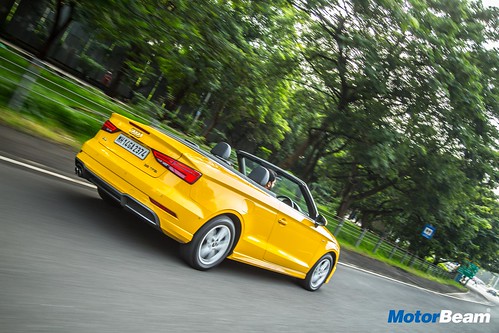 Performance with the smaller engine isn't all that bad, but lacks the top-end punch

The TFSI unit comes with cylinder-on-demand technology where the car uses only two cylinders at low speeds and the other two cylinders are activated only when the need arises. This operation is pretty much seamless and you actually cannot feel the cylinders activating or de-activating. With a 0-100 km/hr timing of 9.53 seconds, the updated A3 is almost a second slower than the previous one. Another noteworthy thing is that the updated A3 Cabriolet misses out on Audi Drive Select modes. The transmission is seamless and one of the quickest units around and comes with Sport mode too. Thanks to the smaller engine, the claimed fuel efficiency figure has gone up to 19.20 km/l. All in all, the A3 Cabriolet won't give you sportscar-like performance but it won't disappoint you either and it is very good if you intend to go cruising in it. 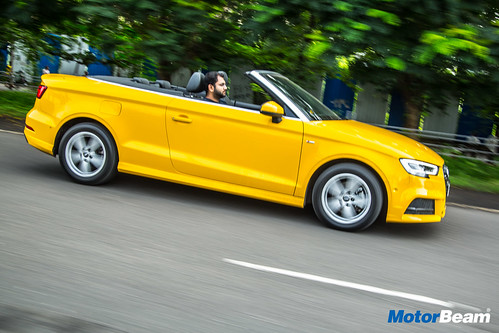 Driving Dynamics – The Audi A3 has always been a very fun-to-drive car. It is very compact in size and the dynamics are pretty much sorted without much to complain. The steering is precise and direct but is devoid of feedback. The suspension has been tuned very nicely and thus you do get a wonderful ride. Passengers feel comfortable and the suspension works well on our roads which have potholes in abundance. The tyres are also very grippy, encouraging you to push the car hard while the brakes do a splendid job of bringing the vehicle to a halt. 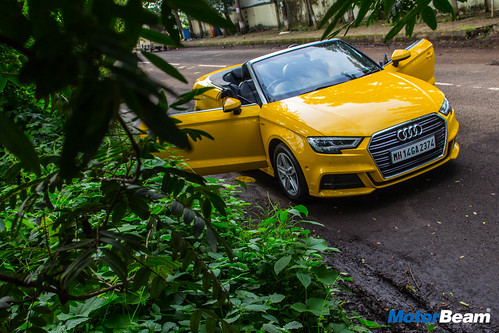 Verdict – The Audi A3 Cabriolet is a well-rounded convertible because it is practical on most counts, has decent performance to boot, comes with excellent dynamics and gets a lot of features too. While you could get a regular sedan with more space and power from a segment above for that price, the Audi A3 Cabriolet will also offer a lot of exclusivity since convertibles are pretty rare on our roads. So, if you're a small family and want to enjoy open-top motoring in a car that isn't exorbitantly priced and is practical for daily usage, the A3 is your best bet. 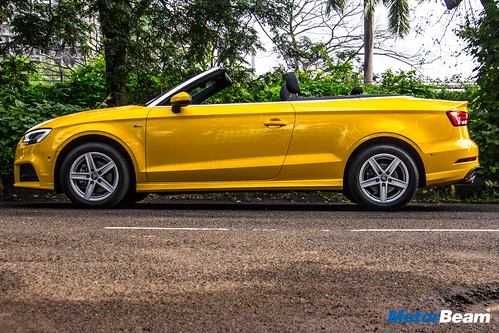 * The A3 looks fresher and sportier with this mid-life update
* Good equipment on offer, decent space in the cabin too
* Driveability, efficiency, ride and handling are very nice

* Misses out on some of the punch of the 1.8-litre engine 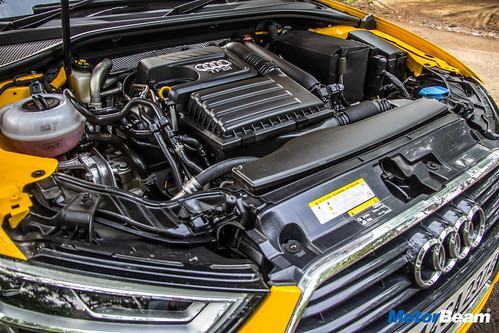 Downsizing engines seems to have become a norm with many automakers

Enough Of The German Flag On Number Plates!

News highlights of the day include Volkswagen, Triumph, Husqvarna and Bajaj Auto. Volkswagen T-Roc - The German carmaker showcased the   END_OF_DOCUMENT_TOKEN_TO_BE_REPLACED

Renault wants to go all guns blazing in the Indian market by creating new segments. Renault launched the Triber in 2019 and this 7-seater   END_OF_DOCUMENT_TOKEN_TO_BE_REPLACED