It's the first month of the year and we have already witnessed 3 electric scooter launches, two of them from mainstream brands who have relied on petrol power since their very inception. If this is not going to make you sit up and take notice of what's coming (a.k.a. the electric revolution), nothing will. On one side is the reincarnation of an iconic scooter in electric form (Chetak) from a mammoth motorcycle maker and on the other side is an electric scooter from a start-up company (their first product ever) but backed by a mammoth company (Hero), seems like a battle of David vs Goliath today as we pit the Bajaj Chetak against the Ather 450.

Motor Quest: The Bajaj Chetak was launched in 1972 and discontinued in 2006 as the Pune based automaker shifted focus towards gearless scooters and motorcycles. The Chetak brand name was brought back just a few months back with the electric version, meanwhile, the Ather 450 was launched in September 2018 and a performance version, 450X was launched earlier this week. 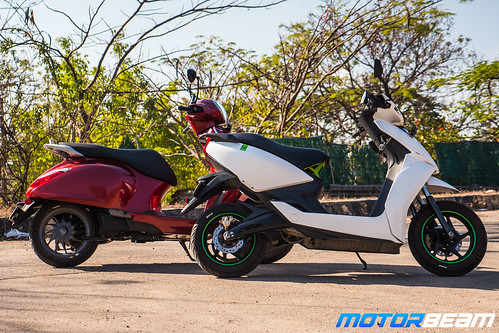 Styling - The Bajaj Chetak sports a very clean design with form over function, something which is rare in the scooter segment because to keep the right side of the alloy wheels seen, Bajaj has opted for a left-sided suspension system. There are too many Chetak logos including the mirrors replicating the design of the logo. So while the Chetak's styling is retro (hello Vespa!), the Ather 450 is sporty in appearance (also gets guide me home light) and the latter does stand out more. However, the Bajaj Chetak is a metal-bodied scooter and the Ather 450 is made of plastic, the former feels more robust and overall built and fit-finish is better on the Chetak while also offering a more premium feel (not a single bolt can be spotted and the rear indicators get the dynamic swipe treatment). 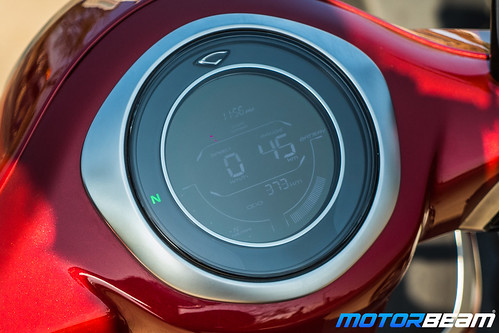 The Chetak's retro looking cluster only shows the most crucial data

Instrument Cluster and Switchgear - The console on the Chetak carries forward the retro theme and is an all-digital unit, not the most readable in broad daylight but gives you all the essential data, nothing more. In comparison, the Ather 450 is a couple of giant steps ahead with its 7-inch touch-screen cluster which comes with integrated Google Maps! The fonts, colours, info and design are just better on the Ather 450 and it also gets 'Over The Air' updates because this one has an in-built sim, the possibilities are endless, making the Chetak's cluster not only look retro but feel so too! 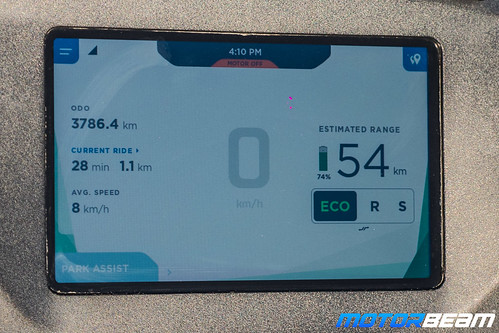 The Ather's touchscreen cluster shows a ton of data including navigation

Both scooters get all digital instrument clusters, but the one on the Ather is far more advanced and modern looking

While Ather offers an app to check various parameters of the scooter via a smartphone, Bajaj says their app will do something similar and will be launched soon, although it won't let you push a location on the scooter's cluster for navigation which is there in the Ather 450. Switchgear quality is better on the Chetak with premium feeling buttons while the Ather's switches come across as a bit cheap. Bajaj has smartly placed a button to open the storage below the handlebar (Ather has a hook here to hold groceries while Bajaj has a retracting hook right ahead of the seat) as well as the under-seat and there is also a USB charging port (illuminated and below the handlebar where you can keep the scooter's documents while the 450 lets you keep the documents digitally in the cluster) in the Chetak which is shockingly not present in the 450! 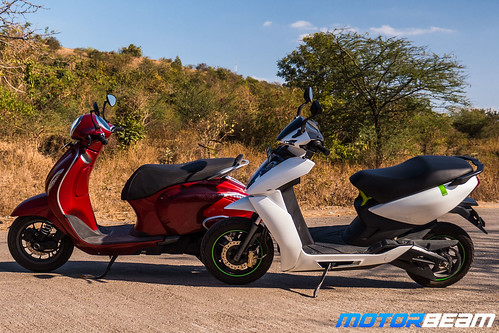 Ergonomics - Both scooters have an upright riding position with similar seat heights but the Ather 450 feels cramped for tall riders like me while the Bajaj Chetak has more space on the footboard to move your feet comfortably. The Chetak also has a softer seat which has better cushioning and pillion comfort is better too, it gets retracting footpegs as well (they are fixed on the Ather 450) with a bigger and better grab-rail! The under-seat storage is bigger on the 450, enough to fit a full-faced helmet while the Chetak can only accommodate a half-face one. Bajaj has been more thoughtful in designing its electric scooter as there is a proper storage space for the charger as well as your phone but in the 450, the only place to store the aforementioned items is under the seat although there are straps and compartments to hold things in place. Both scooters give a decent view of what's around with the mirror having a unique and sharp design. 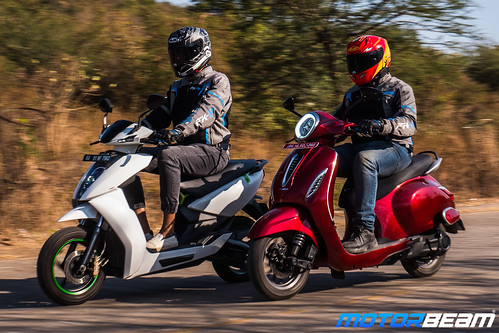 Performance - The Bajaj Chetak gets keyless start (if the key is with you, the scooter unlocks and starts once you push the button, it also lets you locate the scooter with a touch of a button sounding the alarm and turning on the hazards) while you need to use the key in the Ather 450. The charging port is located below the handlebar on the right side in the 450 while Bajaj has placed the port right below the pillion seat, so while charging is more convenient in the Ather, it's more secure in the Bajaj. Both scooters get park assist which lets you reverse the scooter up to speeds of 2 and 3 km/hr in the 450 and Chetak respectively. 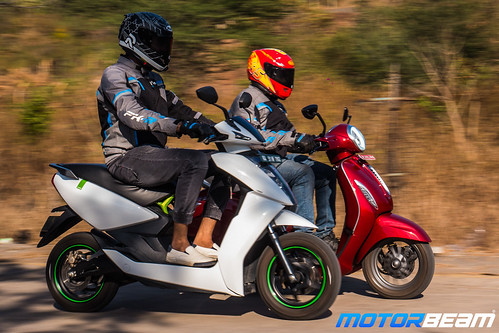 Both scooters get regenerative braking along with park assist

While both are electric scooters, there is a difference between their motors and battery. While both the scooters have an IP67 rated battery, the Chetak also has an IP67 rated motor while the 450 has an IP66 rated motor. Ather's electric motor is more powerful but being a belt drive (the Chetak is a direct drive), also has a higher loss from the motor to the wheels, it produces 5.4 kW/7 BHP and 20.5 Nm against the Chetak's 4.08 kW/5.5 BHP and 16 Nm. Both scooters get regenerative braking. 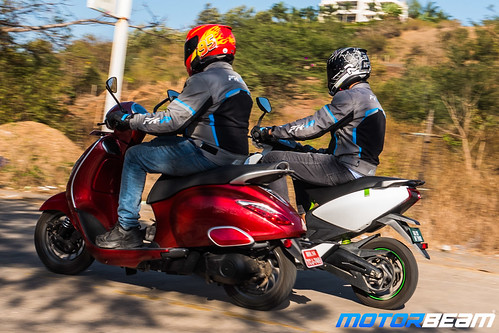 The result is, the Ather simply is the faster scooter here, having an immediate response while the Chetak doesn't feel electric somehow, till you reach around 30 km/hr where it offers the electric punch. Overall performance is better on the Ather and both scooters have Sport modes with the 450's giving you a rush like no other. Both scooters also get an Eco mode with the Ather also getting an additional regular riding mode (the Chetak will automatically switch to Sports mode when you throttle more than 85% and get back to Eco as soon as you leave throttle). Top speed is higher in the 450 at 80 km/hr, the Chetak tops out at 70 km/hr. 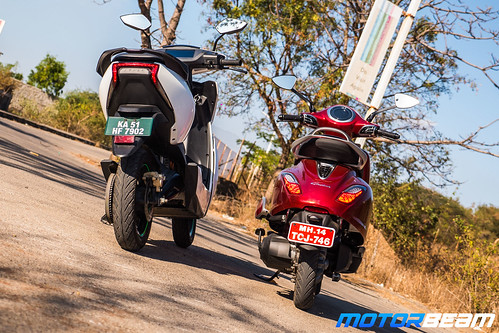 Charging & Range - Bajaj has given the Chetak a bigger 3 kWh battery while the 450 uses a 2.7 kWh battery (both lithium-ion) but still, the 450 has a longer riding range with claimed numbers being 107 kms for the Ather and 95 kms for the Bajaj. In real-world riding, the Ather manages around 77-82 kms and the Chetak manages 70-75 kms. The Chetak does charge faster though but not by much, taking 5 hours for a full charge while the 450 takes an additional 30 minutes. Where the 450 offers better range is with the Ather Grid that lets you fast-charge your scooter at 1 km per minute, the Chetak's battery doesn't fast charge. 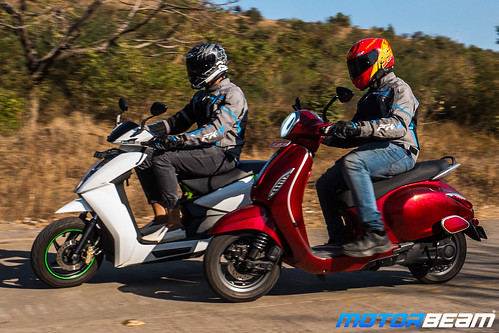 Riding Dynamics - The Ather 450 is slightly lighter than the Chetak and feels that way too. But it's really the weight distribution which plays a big role in making the 450 a better handler as front and rear is almost 50:50 and so is left and right, not the same case with the Chetak as the weight is more left and rear-biased. Ather has been able to achieve this by plonking the battery below the footboard for an overall lower centre of gravity and with the aluminium pressed frame (the Chetak uses a steel frame), it just feels more rigid. Both scooters use the exact same sized tyres, that too from MRF and there is a good amount of grip on offer.

The superb near 50:50 weight distribution on the Ather gives it a far better ride and handling balance

However, the Ather is a more rider focussed scooter and is more fun to ride too as it handles better than the Chetak and is more dynamic and sturdy. Using telescopic forks upfront and a centre mounted monoshock at the rear, the suspension being on the stiffer side, the 450 feels more fluid and composed around the corners while the Chetak uses a left side lean link front suspension and left-sided monoshock which offers a better ride quality. Both scooters offer out of the world high-speed stability mainly because neither reach any high speed. Braking performance is sharper on the 450 as it comes with discs on both ends but the initial bite is stronger on the Chetak. Ather has missed out on a rear brake lock on the 450 which is present on the Chetak, something that makes it that more convenient to park the scooter on inclines and declines. 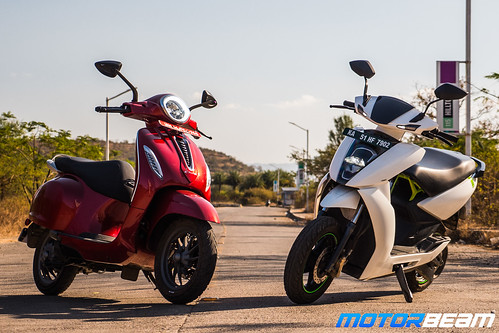 Verdict - Every second day, there is an electric scooter being launched as many traders (as Rajiv Bajaj likes to put it) are bringing in models from China. Amongst a sea of difficult to trust products, these two come across as well thought out scooters which are indigenously designed, developed and manufactured here. The Ather 450 has proved itself while the Bajaj Chetak comes from a brand people won't think twice before putting their money on.

That said, Ather has put its money where its mouth is by offering a state of the art 3-years unlimited km warranty on the battery (the Chetak comes with the same duration but 50,000 kms warranty). However, it's amply clear, the Chetak is more about comfort and practicality, engaging a wider demographic while the Ather 450 is the more exciting scooter with better performance and handling, thereby appealing to the younger audience. Like I said at the start of this exhaustive comparison, it's David vs Goliath and the outcome is no different. 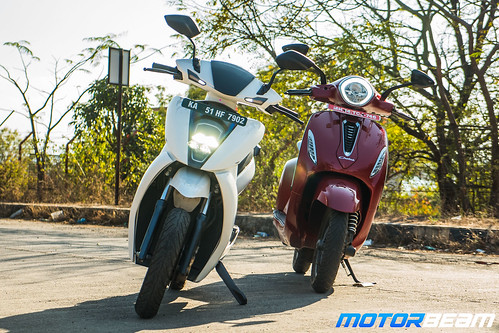 News highlights of the day include MG Motor, Toyota and Ather. MG Hector - The MG Hector got instant popularity as soon as it was launched last   END_OF_DOCUMENT_TOKEN_TO_BE_REPLACED

New Honda City based hatchback leaked in patent images. The new fifth generation Honda City is about to launch in the Indian market next month.   END_OF_DOCUMENT_TOKEN_TO_BE_REPLACED