With its spacious interiors and peppy petrol engine, the S-Presso offers a tough fight to Renault's funky & handsome Kwid

The entry-level hatchback segment in India has a variety of options to choose from, with most contenders coming from Maruti's stable. However, that didn't stop the automaker from launching another small car, the quirky S-Presso. After Maruti launched the S-Presso, Renault launched the Kwid facelift on the next day itself. Now, when Renault launched the Kwid for the first time, it gave a lot of sleepless nights to the Maruti Alto and Hyundai Eon and now this rivalry continues. While the S-Presso is a brand new car based on a tried and tested platform, the Kwid has got some really significant updates. Two small cars, both priced similarly. Which one to buy after all? 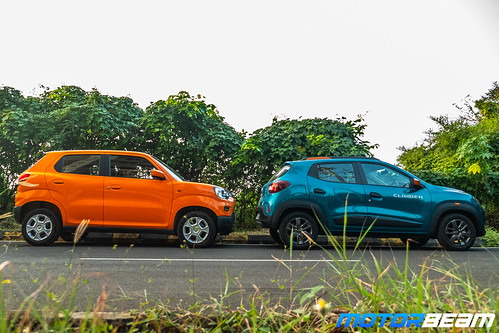 Exteriors - These small cars have nothing in common when it comes to styling. While the S-Presso looks very unconventional with its quirky looks, the Kwid comes across as a far more mature and handsome car. The facelifted Kwid gets a redesigned fascia with a headlamp cluster housing in chunky surrounds along with tweaks to the bumpers and grille. The Climber variant that we have here gets orange accents on the roof rails, along with grey coloured wheel covers. 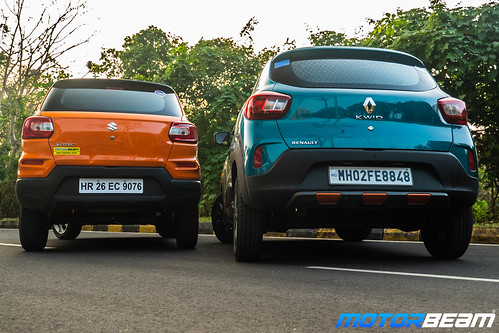 The S-Presso looks plain-jane and doesn't have enough oomph

In comparison, Maruti's new S-Presso looks quirky and might I say disproportionate from some angles. While the fascia does have some styling elements, the side and rear look rather bland in comparison, coupled with the silver-coloured wheel caps. However, the S-Presso does get black body cladding but it seriously looks under tyred with a lot of empty space in the wheel wells. The Kwid is the more stylish car out of the two without a doubt but the S-Presso also attracts a fair bit of attention from curious on-lookers. 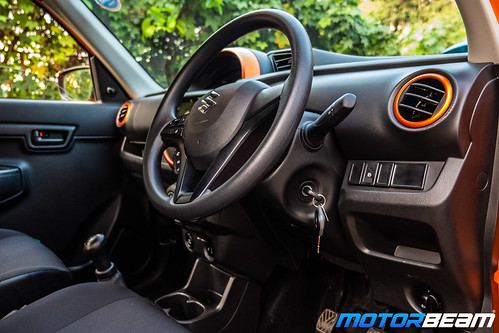 The S-Presso's cabin has better build quality than the Kwid's

Interiors - Both these cars are tiny on the outside but there's a drastic difference when it comes to cabin space. The Kwid's dashboard has got a major rejig and it now gets some feel-good elements like a leather-wrapped steering, a nice touchscreen and a digital instrument cluster. The S-Presso's dashboard meanwhile is typical Maruti fare with a lot of shared components. The MINI-inspired centre console does look stylish and you can get it with orange surrounds too, just like the Kwid Climber which also gets orange accents on the inside. Ergonomics are pretty decent on both the cars but because these cars are small, there's not much room to move around. 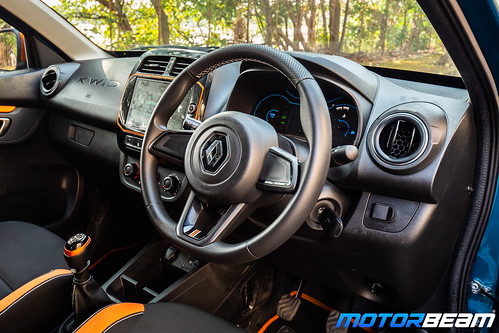 The cabin of the facelifted Kwid gets a lot of enhancements 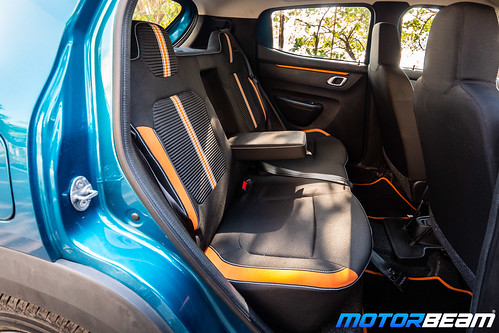 The Kwid has very limited space at the rear

When it comes to space, the S-Presso overtakes the Kwid by a considerable margin. The cabin is roomier, has more legroom and headspace and feels a bit more airy too. So, while the dimensions of the S-Presso might not be as appealing on the outside, the styling actually helps matters on the inside by offering more cabin space. The front seats of the Kwid are a bit stiff but nonetheless, offer decent comfort. Both the cars have a good enough driving position but the seat height isn't adjustable on either of them. The S-Presso's rear seats are a tad more comfier than the Kwid's and also offer way more room for passengers. In the Kwid, if you push the front seats all the way back, you get negligible legroom at the rear but that's not the case with the S-Presso which has decent space to seat 4 people. The Kwid has less headroom than the S-Presso too. 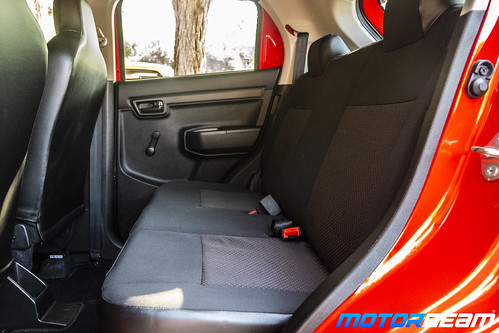 The S-Presso is surprisingly spacious for its size

Both these cars have similar boot capacities (270-litres on the S-Presso and 279-litres on the Kwid), with the Kwid's boot now being smaller than before due to the larger tyres which need bigger wheel wells. Storage spaces are also more or less similar on both these vehicles and there's enough space for your regular nitty-gritties. None of these cars come with adjustable headrests both at the front as well as the rear. If we talk about fit and finish inside the cabin, the S-Presso scores better than the Kwid with its plastic quality. The Kwid does reek of cost-cutting at certain places in the cabin. 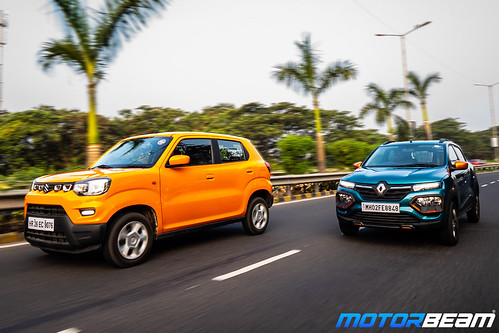 The Kwid's 800cc engine lacks punch, while the 1.0-litre has decent power

Performance - The Renault Kwid is offered with two petrol engines but these aren't BS6 compliant yet. The 800cc engine has just about enough power for city usage and performance is far from exciting. On the highways, if you try to gather speeds or push the car hard, it feels out of breath very quickly. The 1.0-litre engine though is much more livelier. The S-Presso also gets a 1.0-litre engine which is now BS6 compliant and it is the same engine which does duty on multiple Maruti cars like the Alto K10, Wagon R and Celerio. Both the 1.0-litre engines have similar power and torque figures (67 HP/90 Nm and 68 HP/91 Nm) but when you drive the cars back to back, it is the S-Presso which feels so much more peppier. 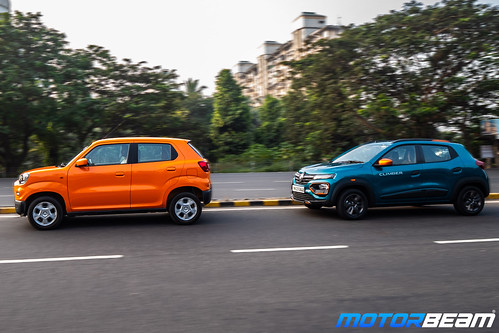 Maruti's K10B engine is a gem in a small car like this. It has very good driveability, likes to redline without creating a fuss and boasts of a responsive nature. Not that the Kwid's engine is boring, but it doesn't feel as responsive as the S-Presso especially in the top-end of the rev band. It is a huge step up from the smaller 800cc engine, offers good power for a car of this size but again tends to feel underpowered on the highways. If we had to pick a winner based on the engine alone, the S-Presso would take the trophy home. NVH levels on both the cars aren't all that plush, with a lot of engine noise creeping into the cabin. The Kwid's engine also sounds a bit louder at high RPMs. 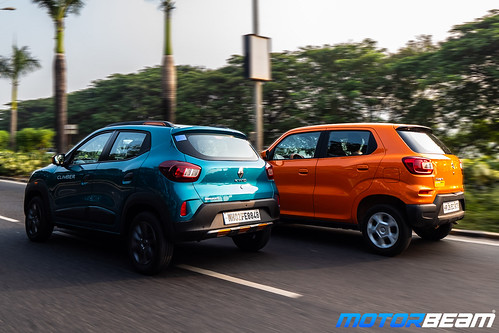 Both cars are available with manual or AMT gearboxes

Both the cars can be had with either a 5-speed MT or an AMT. The S-Presso has a very light clutch and offers slick shifts, meanwhile, the Kwid also has a light clutch but the throws are a wee bit longer. Nonetheless, both the cars are light and very easy to drive. The 5-speed AMT units on both cars feel jerky if you accelerate hard, but otherwise, offer very good convenience in city traffic and I think that's what the target audience looks for anyways. These cars score high on fuel efficiency with similar figures, the S-Presso delivering 15-18 km/l while the Kwid delivers around 15-17 km/l. 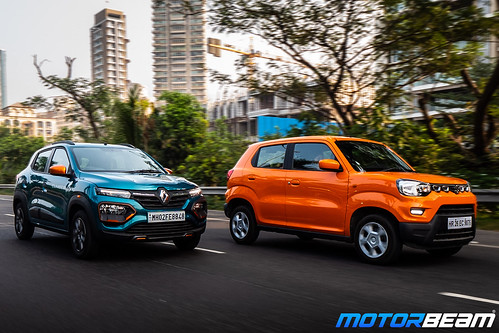 Driving Dynamics - These are lightweight small cars so they do feel a bit jiggly on the highways when driven at high speeds, especially when a heavier vehicle like a truck or a bus passes by. Nonetheless, both the cars are decently stable at speeds up to 80 km/hr. The S-Presso comes across as a bit more fun car to drive while the Kwid has an easy-going nature. None of these cars boast of an engaging steering feel though, but are good commuters since this is what their target audience is looking at. The Kwid now has better stability thanks to its wider tyres while S-Presso has more prominent body roll due to its tall stance. The tyres on the S-Presso feel inadequate if you push the car hard and they lose grip easily. 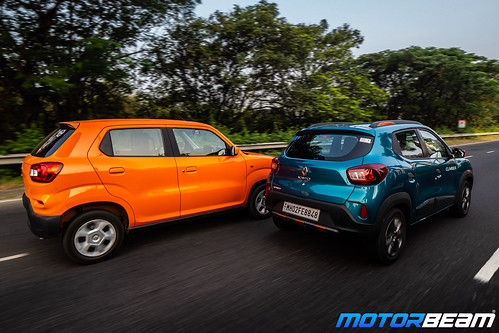 Thankfully both these hatchbacks (yes, the S-Presso isn't an SUV) offer good ride quality. The S-Presso's ride does deserve a special mention for being very compliant on our poorly laid out roads though. The Kwid's suspension is nicely tuned but it is noisy. When you drive over bad roads, you do feel a fair amount of vertical movements in these cars, more so in the S-Presso. Braking performance is decent on these vehicles, but brake very hard at high speeds and you might lose your tail. 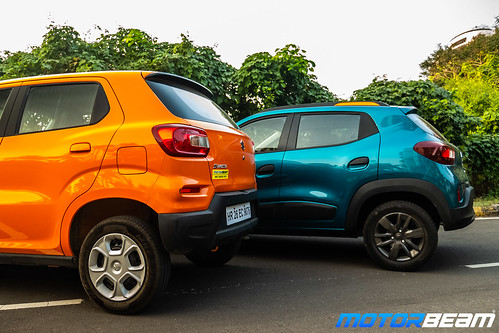 In terms of safety and after sales service, the S-Presso has an edge

Safety and After Sales Service - Renault offers a single airbag as standard across all variants while a passenger-side airbag is optional on the top variant only. Meanwhile, Maruti offers a single airbag on all variants while the VXi Plus trim comes with dual front airbags as standard. The passenger airbag is optional on the lower variants too so an extra brownie point to Maruti for this. ABS and EBD are standard on both cars and so are reverse parking sensors, seat belt reminders and a high-speed alert. When it comes to service, it is impossible to beat Maruti especially when their network is spread across every corner of the country in comparison to Renault's limited network. 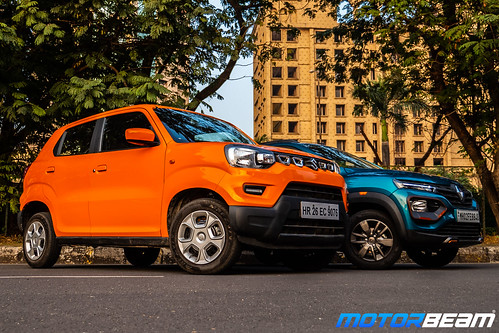 If space is a priority, the S-Presso is the clear winner

Verdict – It isn't very hard to pick a winner out of these two. The Renault Kwid scores high when it comes to styling and a feel-good factor but on other vital parameters like space and performance, it is actually the S-Presso which fares better. These vehicles are priced quite similarly and their top variants cost Rs. 5.75-5.85 lakhs (on-road, Mumbai). If you're looking to buy a car for self-usage and won't need the rear seats all the time, the Kwid does make for a good buy but if you want a spacious car and don't mind compromising on the looks, get the S-Presso. Meanwhile, if you can stretch your budget a little, you may be able to get the Tata Tiago or the base variant of the Ford Figo and both of these are way superior than the S-Presso and Kwid. If you don't mind going the used car route, a plethora of options opens up for you, with a lot of safer, practical and better choices like the Honda Jazz diesel, Honda City, Maruti Ciaz and a lot more. 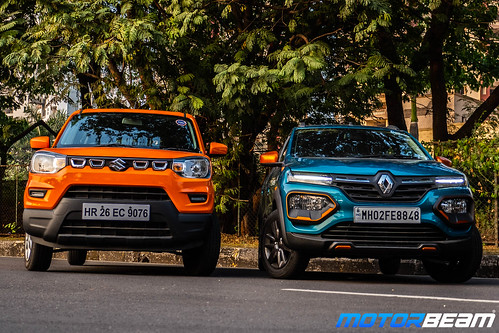 At this price point, the used car market has a lot of good options too

Faith In SUVs Getting Restored

February 2020 has been a bad month for sedans. We all are aware of the fact that the automobile industry has been suffering since more than a   END_OF_DOCUMENT_TOKEN_TO_BE_REPLACED

KTM releases latest TVC showcasing versatility of the 390 Adventure. Catch All The Latest Videos, Subscribe To MotorBeam So the much awaited   END_OF_DOCUMENT_TOKEN_TO_BE_REPLACED