The last time we rode a Triumph Tiger, it was the 800 XRx and it was back in 2017. Last year, the whole Tiger lineup was updated with the company claiming that over 200 new parts had come in. The Triumph Tiger Explorer has two variants of its own the XC and XR while the XR is more road biased, the XC has the bits to make it more capable off-road. As we did not ride 1200 earlier it was time to experience what the flagship Tiger feels like to ride and what the adventure sorcery is all about.

Motor Quest: Triumph showcased the Tiger Explorer first time in 2011 worldwide while they launched the XR and XC in the following year. It was about that time Triumph also entered the Indian market. Some changes were made in 2018, the Tiger Explorer lineup has seen a major update all across including the 800 as well as 1200 in both XR and XC line-up. 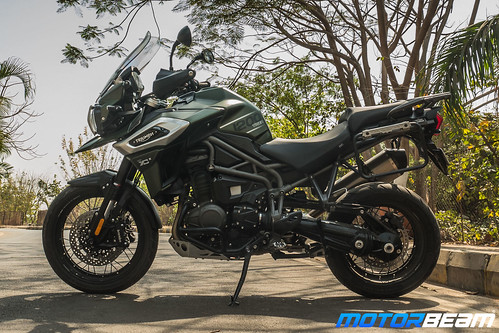 Styling - All the Triumph Tiger motorcycles have a very similar design language. However, the 1200 XCx being the top-of-the-line Tiger has a lot more road presence than other Tigers. It is a huge motorcycle, starting off with the 20-litre tank which gives it all the mass. As it is covered with a lot of bulky body claddings and has a bikini fairing design with extension. Then comes the front beak which is comparatively smaller but has a pair of decently big twin LED headlamps. Topped by a humongous windscreen which is electronically controlled. While a pair of hand guards and chunky upside-down forks complete the look at the front. 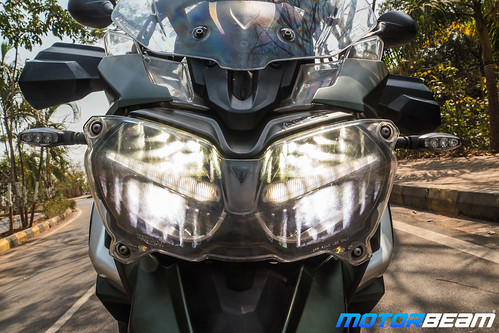 The LED headlight unit here gets an off-road protective cover

The tubular bits of the chassis run all along while the engine is protected with another pair of tubular crash protectors and a bash plate. Some extra tubular bits at the rear were present on our test bike which come in handy to mount a pair of panniers. The Tiger 1200 gets spoked wheels with tubeless rubber while it gets a single-sided swingarm at the rear. This by itself is a shaft-drive unit and you wouldn't notice any chain or sprocket here. It also gets a radially mounted rear disc while an upswept exhaust on the other side completes the adventure look of the motorcycle. 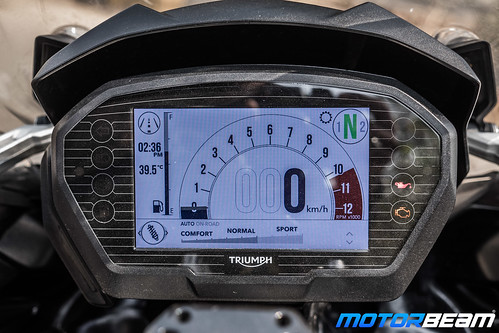 Instrument Cluster and Switchgear - The first time we saw this instrument cluster, it was on the Triumph Street Triple RS and now the Tiger 1200 gets it too. However, things are slightly different with a little more information on offer. The 5-inch fully digital console displays the speedometer, tachometer, gear-position indicator, time, ambient temperature and fuel gauge as standard. The information stays standard throughout the 3 different layouts you can choose the screen to be in. The lower rectangular bar keeps switching between different things with a joystick switch. From suspension setup, engine temperature, trip details, odometer and riding modes, the rider can keep switching and look out for the details they want. 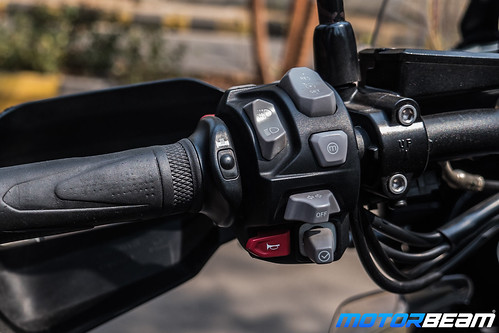 Just try to count the number of buttons on this swtichgear

Cluster is loaded with information while the switchgear with buttons

The screen has a textured finish on all the side and that is where the tell-tale lights are placed. Alongside, it has a sensor too which dims the screen and changes the background to black as soon as it gets dark. The switchgear is also similar to the one on the Street Triple RS but as an addition, we get cruise control switches on the left side unit. The right side unit is very simple, has a starter button and a home button to get into settings along with a button to turn on the heated seat. The other unit has all the gizmos, from a riding mode switch to a joystick which can be used to get around with the screen. The switches are finished in grey and red while they feel quite good. 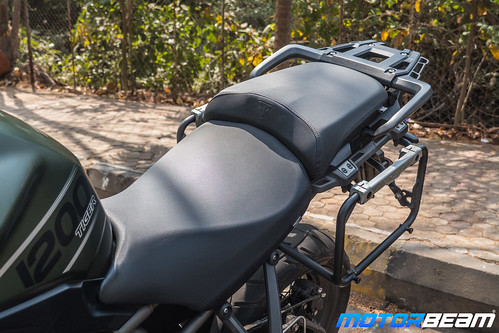 835-850 mm of seat height for the rider, pillion sits another 2 inches higher

Ergonomics - The ergonomic triangle of the Tiger 1200 is very comfortable. Just like any other adventure motorcycle, you sit upright and while the back stays straight and handlebar isn't too far. The lowest possible seat height is at 835 mm which is decently tall and with the electronically adjustable suspension, it goes up to 855 mm. The 20-litre tank is huge but it is well designed ergonomically as there's enough room for the rider to lock the knee and to stand up as well. The electronically adjustable visor is tall but does not hinder vision as much. The split seat unit is quite comfortable and decently wide too. The cushioning is soft for the rider as well as the pillion but it is a task for the pillion to get on and off. 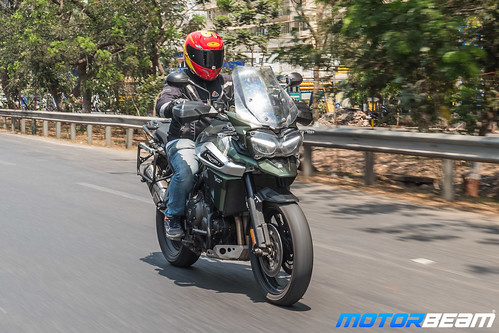 Straight-line stability is just brilliant, stays glued to the road

Performance - The Tiger 1200 is powered by a 1215cc in-line triple engine which produces 139 BHP of power and 122 Nm of torque. The power delivery is up high in the rev range and the power band is quite linear too. While the motor redlines slightly above 10,000 RPM the top-end is very strong and the bike feels very lively. Throttle response isn't choppy throughout but response becomes slightly uneven in the low-end. However, the mid-range is strong and widespread. There are multiple riding modes as well which play along with the electronics and change the character of the bike completely. Road mode keeps the motor in control and comfortable, sports mode is well suited for spirited riding while off-road mode dials down the power. There are two more modes, off-road pro and track which have a major effect on the engine power delivery as well as the traction control system. 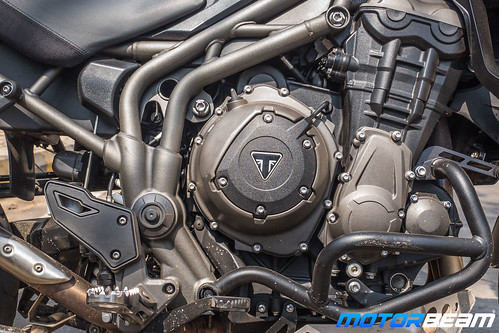 Very tightly put together, the motor does transmit a good amount of heat

The main gimmick here is that the Tiger 1200 is shaft driven making the power delivery very potent! There is very less power loss and in on-road or off-road conditions, the Tiger 1200 just guns through. Being a triple cylinder unit, there are very fewer vibrations coming from the engine. But they start to creep in as the revs build-up. The Tiger 1200 gets a 6-speed unit and gearbox is slick-shifting but the clutch is comparatively heavy and weighs up when quick-shifting. The motorcycle is comfortable to cruise at 120 km/hr while it does reach that number in the 2nd gear itself. We got an average fuel efficiency of 16 km/l with which it does have a tank range of slightly over 300 km. The test bike was fitted with an aftermarket Arrow exhaust which has a very pleasing exhaust note too. 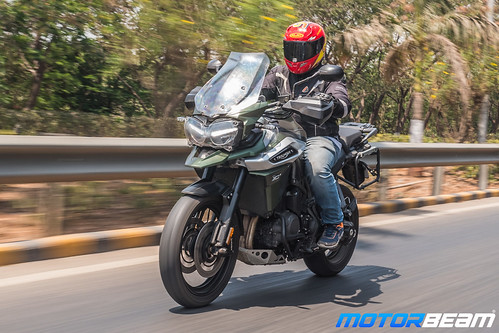 The Triumph Tiger 1200 handles like a gem, very agile

Riding Dynamics - The ergonomics are very comfortable and purposeful but the Tiger 1200 does not feel like a big bike when it is on the move. The windscreen comes in very handy as there is a decent amount of windblast but it cuts through. Cruising at triple-digit speeds is like a piece of cake, straight-line stability is just mind-blowing. The steel trellis frame is very well designed, keeping the centre of gravity as close as possible to the footpegs. This means that tipping the mammoth into corners is very easy and it holds the line well too, it feels very agile. The test bike was equipped with road spec tyres, a 120 section front and 170 section rear mounted on 19-inch and 17-inch spoked aluminium rim respectively. 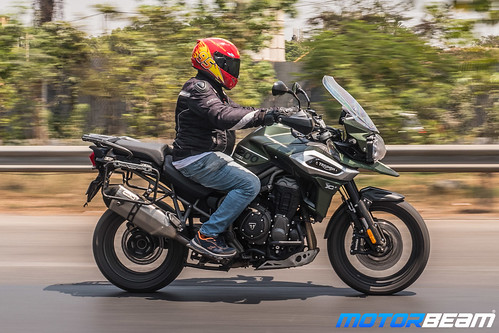 On-road or off-road, it manages to be in control

Standstill, you can feel the weight which is close to 275 kgs but not once on the move

The grip from the tyres is adequate enough for the road but taking this bike off-road you would definitely need off-road spec or at least a dual-purpose rubber. Front suspension is a pair of WP 48 mm upside-down forks while the rear is a WP monoshock. Both these suspensions have electronically adjustable damping while the rear has automatic preload adjustments too. This makes the motorcycle ready for any situation with a touch of a button. Feedback from the brakes is just astonishing, twin 305 mm discs at the front and a single 282 mm disc do their job really well. The bike just stops under the command and has a bit of a nosedive depending on the damping settings. It gets cornering ABS as well which is switchable too. 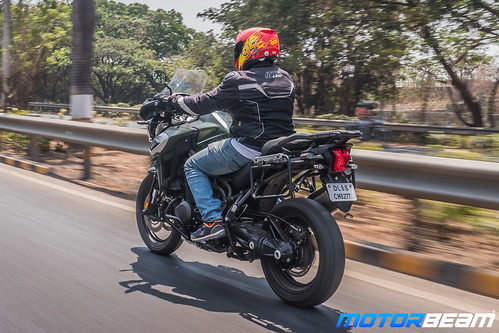 As a complete package it feels very appealing

Verdict – The Triumph Tiger 1200 is a mammoth of a motorcycle and in its XCx trim it is quite capable off-road as well. While it comes loaded with a ton of hardware the engine does heat up a lot and is not suitable for Indian riding conditions. But the power delivery is just mind-blowing and the way this motorcycle handles and rides through various terrain makes it very appealing. It is quite comfortable and can do touring duties while with the different riding modes and a skilled rider, it can go to places that can only be imagined. As a flagship motorcycle in the Tiger line-up, it does come at a cost! But the capabilities almost overshadow the cost of ownership. But then if the heat and price bother, there is a younger brother under the Tiger 800 line-up which is just as capable as the Tiger 1200 XCx. 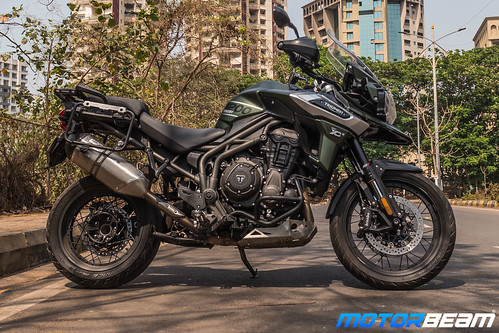 Almost 200 new parts from the previous generation, it sure is better now

* Bike is tall and way taller for pillion duties
* Priced at a premium, it almost costs as much as a mid-size SUV
* Engine displaces a lot of heat which is too much for Indian riding conditions 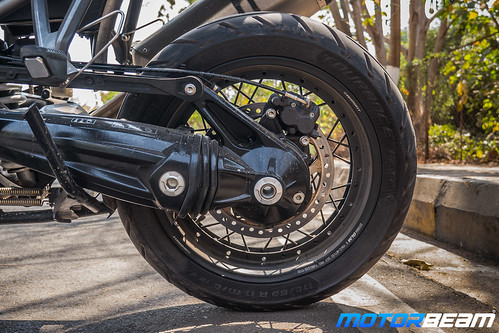 It is the most powerful shaft driven motorcycle in its category

"This motorcycle is simply not an adventure machine but more than that, with so many features on offer, it feels like a luxury car on two wheels and has the hardware to be a globetrotter, the only issue is the heat and the price, the former makes it difficult to ride in hot countries like ours." - Faisal Khan, Editor, MotorBeam.

The Tiger 1200 XCx is the flagship Triumph adventure motorcycle available in India. Powered by 1215cc in-line triple motor which produces 141 PS of power and 122 Nm of torque. It is also loaded with hardware with 5 riding modes, electronically adjustable suspension, cornering as well as switchable ABS and a shaft unit as the final drive unit. It has a very commanding riding posture with agile handling makes the Tiger 1200 very comfortable yet keeping things in control.

Royal Enfield is on a product offensive for next 3-4 years. New Royal Enfield model to launch every quarter. Yes you heard that right. The   END_OF_DOCUMENT_TOKEN_TO_BE_REPLACED