The Volkswagen Ameo was launched in India in 2016 in a bid to close the gap between the Polo and Vento. This compact sedan was initially offered with a 1.2-litre MPI petrol engine while the 1.5 TDI made way later. The Ameo offered two things that the Polo didn't - a diesel-automatic variant and a spacious boot. We had the Ameo TDI DSG in our long term fleet for a few months and after using it rigorously across varied driving conditions, we only have good things to say. Well almost! 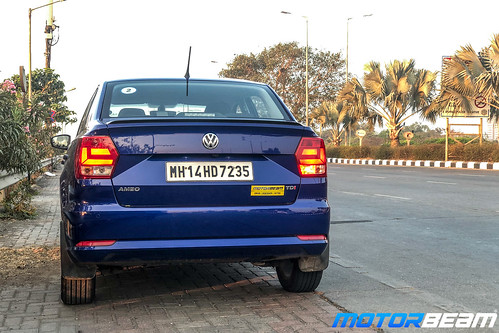 Now the Volkswagen Ameo is a sub-4-metre compact sedan and thus it is designed and built keeping certain criteria in mind which is why the styling looks a bit quirky from some angles, the side and the rear three-fourth. Now people have different tastes obviously so some people found the design pleasant while some didn't. Styling aside, what I realised over the course of time, driving the Ameo on Mumbai's roads for a little over three months, that the build quality is indeed excellent and not just that, the quality and finish of the paint also feels worth the money. We drive multiple cars every month and when I compared the Ameo's quality to certain cars positioned in a segment above, this compact sedan shone. 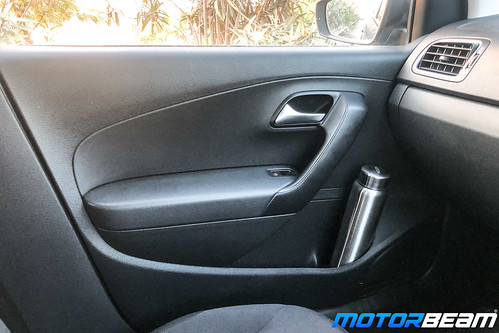 When I had the Ameo with me, I drove it 90% of the time while the remaining 10% I was seated in the front passenger seat while a colleague was driving. I'm thankful for that because the Ameo has almost the same wheelbase as the Polo (2469 mm vs 2470 mm) which means that the rear seat feels very tight on space and the knee room is so limited that your knees constantly brush against the back of the front seat if you're a tall guy. If a 6-footer adjusts the driver's seat for his driving position, legroom at the rear gets drastically affected and I think this is one of the biggest sore points of what is otherwise a very good cabin. 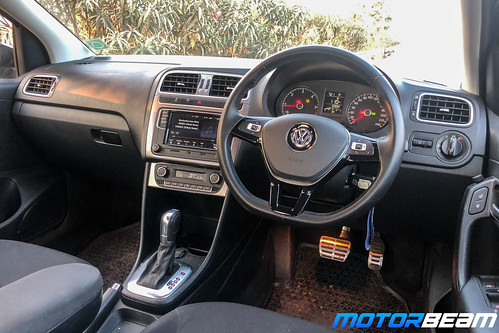 The cabin cocoons you nicely from the outside world

Just like the exterior, even the interior of the Volkswagen Ameo feels nicely built. The driving position is spot on and the seats are quite good. The ORVMs could've been slightly bigger though. The touchscreen infotainment system is good when it comes to connectivity and fluidity of the screen. It always connected to my iPhone in a jiffy. The sound quality from the speakers isn't particularly eargasmic but play around with the equalizer settings and you're bound to reach a setting that'll suit your taste. The speakers throw out good enough sound at moderate volume but turn up the knob and you'll hear some distortion. You get other goodies like automatic climate control, electrically folding and adjustable mirrors and a nice armrest at the front which is thankfully adjustable. 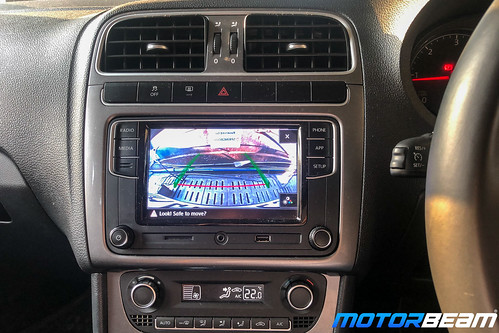 The reverse camera is crisp and offers a clear view

Apart from the limited rear-seat space, the cabin of the Ameo feels well built & has a good amount of features on offer

Now the Ameo misses out on some vital equipment. Our test car didn't have seat-belt reminders even for the driver while other features like keyless go with push-button start and projector headlamps are missing. I don't really mind turning the key to start the car so never thought much about the start/stop button but I guess better illuminating headlamps would've been welcome. The Ameo gets standard halogen headlamps and fog lamps and they do light up the road pretty decently. For our driving conditions, the Ameo's size feels perfect because the car is so easy to manoeuvre in tight spaces and the DSG just makes it a joy. 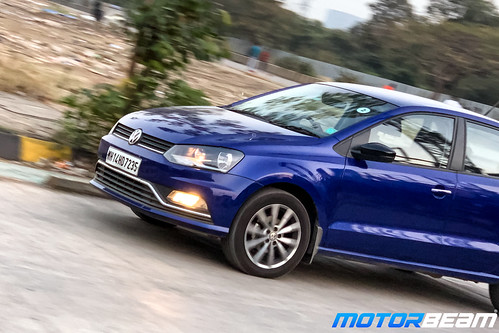 This diesel engine + DSG combo is tough to beat

Talking about the DSG, well this is the best automatic gearbox available in the compact sedan segment and that combined with the 1.5-litre TDI engine is a sure-shot combination that no one will hate. The diesel engine, though noisy, has oodles of power and torque and never ever feels breathless. Start up the car and it'll make some diesel clatter but slot the gear selector to D and get going, you'll realise how responsive and easy to drive the car is. The DSG upshifts quite early which means you're already in D6 at 60 km/hr and this results in excellent fuel economy too. Some turbo lag from the engine is felt lower down but the torque wave in the mid-range is very satisfying. 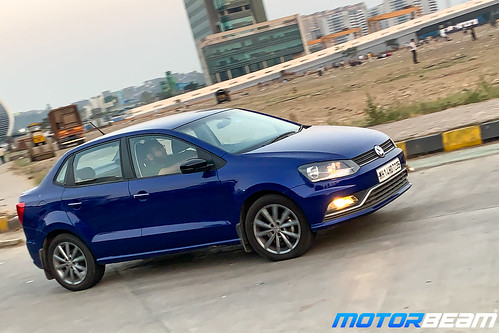 Mash the throttle and the Ameo will never disappoint. It picks up pace very nicely and before you know it, you've already crossed the ton. The DSG works hard in selecting the right gear and when you're driving in traffic at low speeds, the gearbox gets a bit confused and this leads to some unwanted jerks. This usually happens between D2 and D3 but once you gather some speed, the shifts are as seamless as they can be. The driveability of the Ameo is awesome, no doubt, but it gets even better in S mode. The gearbox holds onto gears much longer and this results in better responsiveness from the engine. There's this particular empty stretch on my way to work where I can easily let the car loose for a few kms and here's where I exploited S mode the most. Most of the times, I drove in D and was pretty much happy. The S mode also comes in to be useful on ghats and sections of the highway where you want to make quick overtakes. 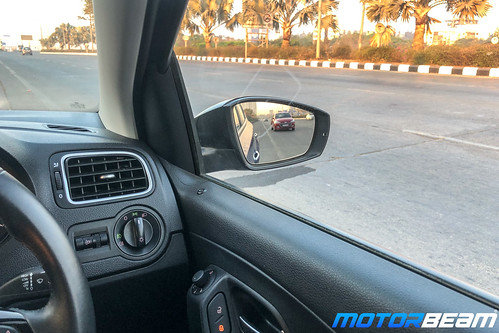 Slightly bigger ORVMs would have been very helpful

The body control of the VW Ameo is just fab and the way this car maintains its composure at various speeds is impressive. The steering is precise, though it doesn't offer that great feedback. At light speeds, the steering on our test car felt quite heavy and this became a bit annoying while parking the car in tight conditions. The Ameo is always eager to dart into corners and the 16-inch tyres come in to be very useful, offering good grip. I didn't face any issue with the ground clearance but there was this one instance where four of us were travelling in the car for a shoot and the boot was loaded with a lot of video equipment, the Ameo scraped its underbelly on what was a very poorly designed speed breaker. The suspension of this car is tuned to offer a firm ride and this also goes a long way in ensuring good stability. 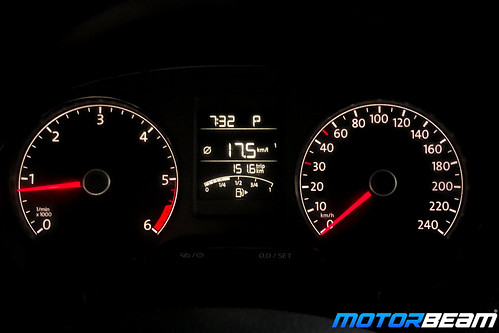 With the BS6 norms looming in, the Volkswagen Ameo will soon be discontinued which is why our long term car is leaving the fleet. The Ameo impressed everyone in the team and why not, it offers a very engaging driving feel, the pull from the diesel engine is hard to match and the build quality is one of the best in the segment. As far as I'm concerned, the only major negative in the Ameo is the rear seat space and this is why I feel this car couldn't fetch the sales it deserved. The Ameo never let me down even once in all these months and after driving it for over 4000 kms, it was hard for me to say goodbye to this trustworthy workhorse. 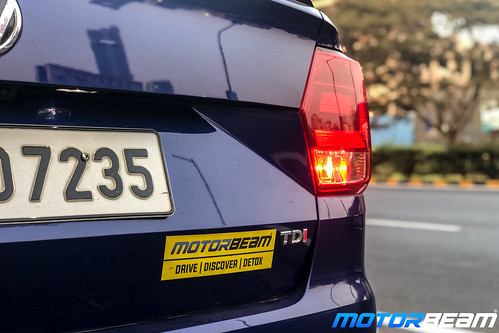 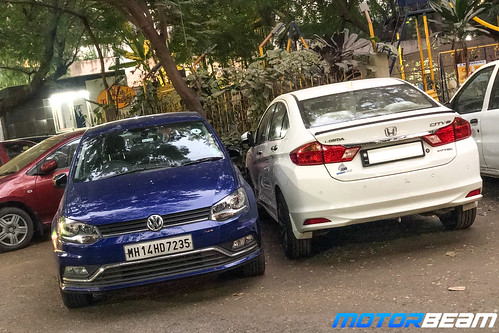 The Ameo diesel gave good company to my City petrol

News highlights of the day include Hyundai, Mercedes, Toyota and Volkswagen. Hyundai Kona - Prices of the Hyundai Kona have been increased by   END_OF_DOCUMENT_TOKEN_TO_BE_REPLACED

A person in Rajasthan has modified his Premier 118NE to look like a Rolls-Royce Phantom Drophead. Catch All The Latest Videos, Subscribe To   END_OF_DOCUMENT_TOKEN_TO_BE_REPLACED

The upcoming Benelli 600RR has been spied in production-ready form. Benelli had discontinued the Tornado 1130 in 2014 and quit the sports bike   END_OF_DOCUMENT_TOKEN_TO_BE_REPLACED