Aggressive yet efficient, practical but not for everyone; the Yamaha R15 is still the leader in the 150cc segment

As soon as the Yamaha R15 joined our MotorBeam long-term fleet everyone who rides to work was keen on swinging a leg over the version 3.0! As the safety norms had kicked-in and BS6 was gonna kick-in any moment we got the R15 V3 with dual-channel ABS. More than anyone, I was extremely happy as even for a short time, the R15 V3 was going be the perfect motorcycle to ride in really good weather. 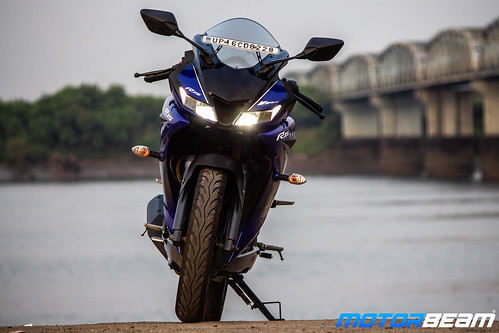 The styling of the Yamaha R15 V3 is sharp and with the racing blue colour, it does grab a good amount of attention. I had picked up the R15 at just 1750 kms on the odometer. It was a brand new bike and had a UP registration which got me worried as it would be a cop magnet. As I got it home, it did get a lot of attention from the cops but as I was in our riding gear they never stopped me. Surprisingly the FK-R signature jacket and gloves went very well with the R15's colour scheme. The icing on the cake wasn't just the dual-channel ABS, it was the rear Metzeler tyre. The R15 with stock MRF tyres would grip well but this Metzeler offered even better grip. 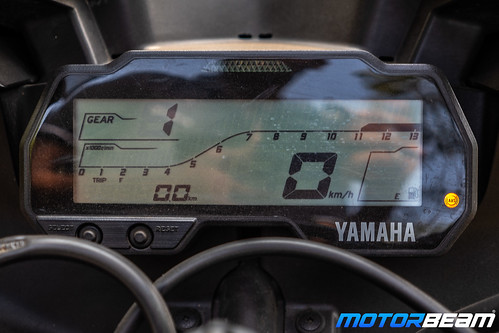 Horizontal all-digital cluster has the perfect position, it does not bother the field-of-vision

I started commuting every day on this and while I did that, the aggressive seating posture had two effects. I was always committed to riding it the way it should be ridden while my back would give up on any kind of bad surfaces. Taking a light-weight pillion was easy too and they could even see where I am going as they would sit quite high. The seating comfort wasn't the best for the pillion and the lack of grab rails made it quite difficult at times. The bike felt front heavy with aggressive clip-ons and they would weigh up even more if I had a heavyweight pillion with me. 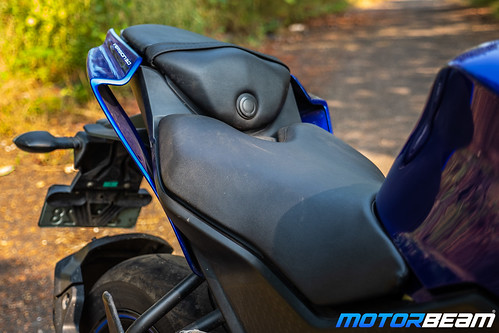 I had already tested the 155cc motor and was very impressed with the VVA tech which meant it did have a linear-pull from the mid-range to the top-end. But riding in the city showed that it does have a very decent low-end grunt while the motor does not have heating issues even in stop-go traffic. One of the weekends, I was able to take it out for a breakfast ride and the R15 would cruise really well at 90 km/hr while the VVA would just kick-in on the console at 6500 RPM. The throttle response became very sharp post 6500 RPM considering this was just a 155cc motor. 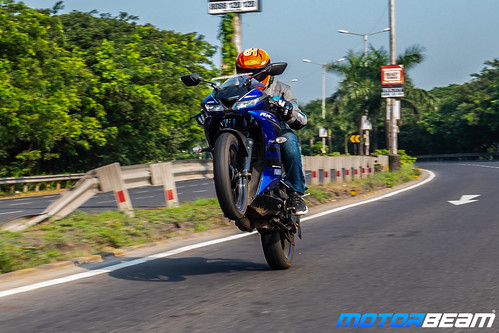 Tipping into corners is like a walk in the park, the R15 does it effortlessly

The R15 would return a city mileage of 35 km/l while on the weekends and highway runs it jumped to 43 km/l! The VVA tech does let more air and fuel inside the engine but right at the edge of it, the motorcycle returns the best possible fuel efficiency. The extended visor did help quite a few times but the LED headlights weren't the best at stock projection setting. They had to be adjusted in an angle so you could get the best visibility at night. 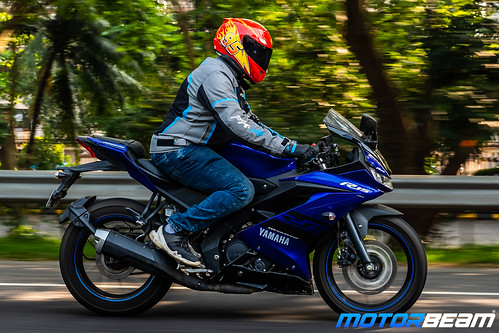 Getting used to the riding posture might take some time

The tyres were impressive and so were the brakes as the ABS unit worked really well on the track the first time I tested it. But in everyday riding situation you need ABS more than ever. The braking feedback wasn't as sharp now so you could grab the brakes harder and the feedback improved. But the best part while braking was downshifting with the assistance from the slipper-clutch as it didn't let the rear step out. There were times when I would push the R15 close to its limit but the hardware onboard did keep me in control. 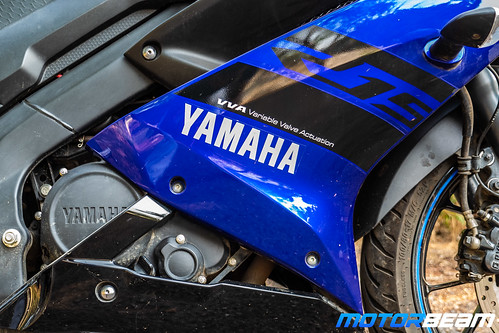 The 155cc motor with VVA does not disappoint ever!

The suspension setup as many would complain is inferior to that on the international variant but in reality, it is very well suited for the Indian road conditions. The setup is stiff compared to the other 150-160cc motorcycles in this segment but it is rather softly sprung if you compare it with the KTM RC series. The longer wheelbase gives it great straight-line stability while pushing hard and the Deltabox frame keeps everything in control even while taking a corner or managing and filtering traffic. 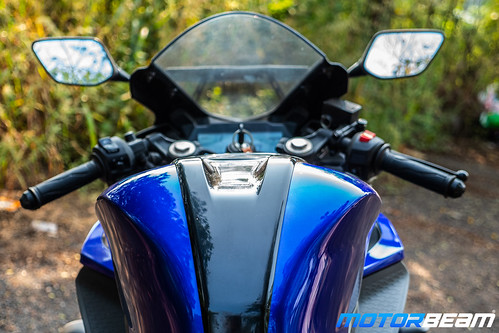 Going the distance? The 11-litre fuel tank might be a bit small

The clip-on handlebar does make you feel that you are riding a smaller than a usual motorcycle and this helped a lot while filtering through heavy traffic. The mirrors, on the other hand, created problems while doing so and had to be folded-shut every time. The mirrors did give a decent view of what's behind once adjusted properly else you would just see your arms all the time. After completing almost 1000 kms in just 3 weeks, I had to return the R15 as the BS6 fleet was on its way. 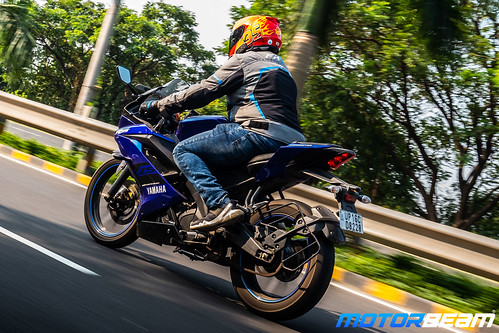 The exhaust note is quite engaging as you open the throttle

In this 21 days of riding, I realized I was riding the most powerful R15 that Yamaha ever made as the BS6 norms would cause a drop in power figures by a decent margin. The R15 isn't a practical daily commuter for everyone but the young blood who is ready to accept the aggressive riding posture can manage it very well. It isn't a comfortable motorcycle at all but the way it looks and the attention it grabs is very addictive. I am waiting to get my hands on the BS6 lot and see how things get better or worse since the norms will make it even smoother but possibly slower. 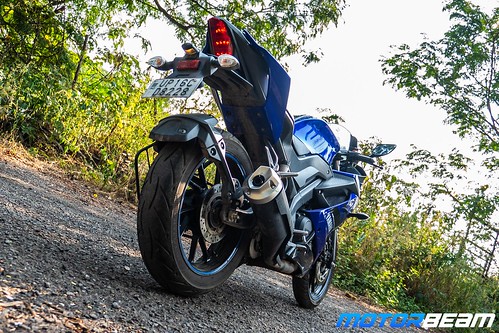 Design, handling, as well as the motor, everything is quite sharp

News highlights of the day include Hyundai, Mercedes, Toyota and Volkswagen. Hyundai Kona - Prices of the Hyundai Kona have been increased by   END_OF_DOCUMENT_TOKEN_TO_BE_REPLACED

A person in Rajasthan has modified his Premier 118NE to look like a Rolls-Royce Phantom Drophead. Catch All The Latest Videos, Subscribe To   END_OF_DOCUMENT_TOKEN_TO_BE_REPLACED

The upcoming Benelli 600RR has been spied in production-ready form. Benelli had discontinued the Tornado 1130 in 2014 and quit the sports bike   END_OF_DOCUMENT_TOKEN_TO_BE_REPLACED