The Yamaha R15 started the 150cc supersport segment in India back in 2008 and did turn the fortune tables for the Japanese automaker. Three years later came the R15 V2 which promised to be sharper and an aggressive motorcycle than the previous generation R15 and now fast forward to 2018, Yamaha has launched the R15 V3 which borrows its styling cues from its larger siblings the R6 and the R1. So is the R15 V3 only about the styling from the bigger R bikes or is there more. Time to find that out.

Motor Quest: The India-spec R15 V3 may not be the same as the one offered in the international markets but let us not blubber at that. The R15 V3 promises to be more fun, be it on the race track or the city roads or even the highways for that matter. 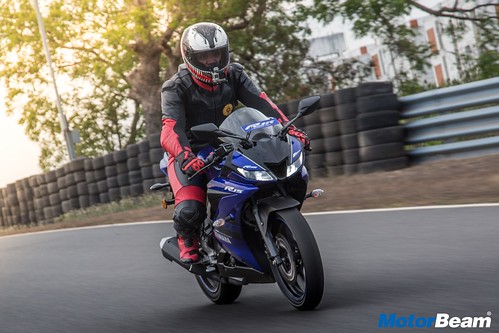 The R15 V3 looks better than ever

The Yamaha R15 V3 looks better in person than in pictures

Styling - The Yamaha R15 V3 looks sharper and borrows its styling and design cues from the larger sibling, the R6. The motorcycle gets slim LED headlights and a faux air duct between them. There is a large and tall windscreen which helps in cutting out the air while riding on the highways. Underpinning a new Deltabox frame, the motorcycle gets subtle tweaks to its fairing and the fuel-tank. Like the R15 V2, the 'R15' and 'Yamaha' decals can be found on the fairing itself. The Yamaha logo on the tank has been moved from the side to the top of the fuel-tank.

The bike gets new 10-spoke alloy wheels and a distinctive exhaust. The clear-lens effect on the LED tail-light has given way to a regular (red lens) LED tail-light. The design of the rear tyre hugger has also been changed. In terms of dimensions, the R15 V3 is longer by 20 mm, wider by 50 mm and taller by 65 mm than the previous R15. While the wheelbase is down by 20 mm to 1325 mm, the motorcycle also boasts of an increased ground clearance of 20 mm, now at 170 mm. The R15 V3 is available in two colour options - Thunder Grey and Racing Blue. Overall, the R15 V3 is a great looker with proper attention to detail everywhere. 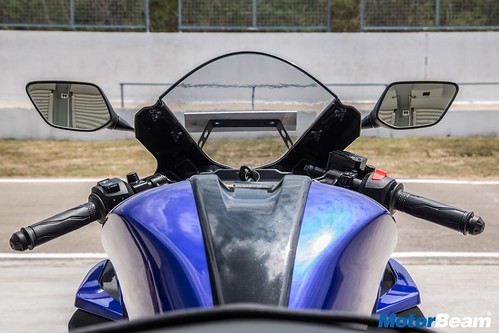 The tall visor is effective at controlling windblast; quality of switchgear is also good

Instrument Cluster and Switchgear - The R15 V3 gets a new fully digital LCD instrument cluster which looks much better than the one on the FZ25 or the Fazer 25 primarily because of the larger display. The instrument console features a speedometer, tachometer, odometer, trip meter, fuel-level indicator, average speed, instant fuel consumption, average fuel consumption, clock and a gear position indicator. The tell-tale at the side of the console includes shift light, VVA indicator and engine temperature. The RHS features an engine kill-switch and a self-start button while the LHS gets the usual horn, indicator and a low/high beam button. The positioning of the buttons are accurate and the quality of plastics used are also good.

Ergonomics - The Yamaha R15 V3 carries the sporty and aggressive riding position from the V2 which isn't a bad thing at all. The rider does have to lean forward to reach the handlebar while the foot pegs too have been rear-seat to complement the sporty riding position. The seat does offer a good comfort and is padded quite generously. Like on the previous R15, the pillion doesn't get a grab rail and the pillion seat is quite high set (but not as high as the R15 V2). The R15 V3 is comfortable for city commutes, occasional short highway stints and is definitely fun on a stretch of mountain roads and the race track. 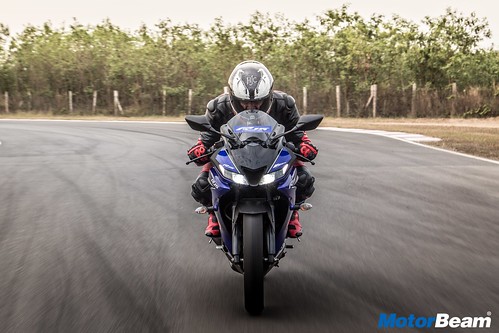 Though the R15 V3 weighs 3 kgs more than the V2, the former feels more agile and nimble

Performance - The R15 V3 comes powered by a new 155cc single-cylinder, liquid-cooled and fuel-injected motor that produces 19.3 PS (up by 2.3 PS) of power at a screaming 10,000 RPM and 15 Nm of torque at 8500 RPM. The powertrain gains the VVA (Variable Valves Actuation) technology and comes mated to the same 6-speed gearbox like before but this time around Yamaha has given an Assist and Slipper clutch for the V3 and it works wonderfully. The slipper clutch reduces the weight of the clutch pull thereby providing low-stress shifting during deceleration. The R15 for the first time features the VVA tech. The system serves torque for ease of use at early RPMs. Basically, there are two intake valve cams, one for the low-mid range RPMs and another for the higher RPMs. At the 7400 RPM mark, they switch between each other to ensure accurate power and torque are present throughout the rev range.

The motorcycle gets a 48-teeth rear sprocket as opposed to 47-teeth in the V2, helps in faster acceleration

The gearbox is super slick and the exhaust sounds very throaty at higher RPMs. While on lower RPMs, the exhaust sound is identical to the R15 V2's. Every component of the powerplant is well-built. During and after our ride on the new R15 on the track, we didn't really notice a difference in the way the R15 V2 and R15 V3 rode. Probably driving both the versions back to back on our roads will let us know the difference, so we will reserve our judgement till we do just that. 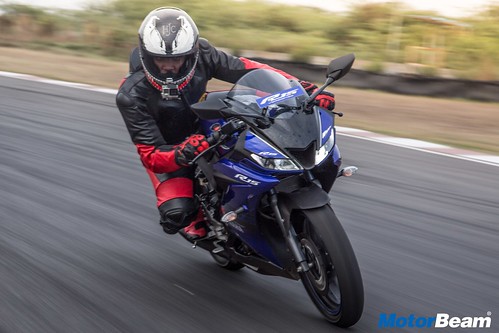 If you decide to buy the R15 V3 after reading this review, make sure you get better stickier rubber

Riding Dynamics - The R15 V2 was itself an aggressive machine and the V3 takes that to a notch above. Though you lean towards the front to reach the handlebar, the comfortable and well-cushioned seat ensures that the ride is comfortable irrespective of whether you are on the track or on the roads. Maximum weight is still concentrated at the front and this R15 V3 is a confidence-inspiring and a corner-carving machine. The R15 V3 gets slightly fatter front telescopic forks and a monoshock at the rear. The suspension setup is similar to the R15 V2 and there isn't much difference between the older and the newer versions. 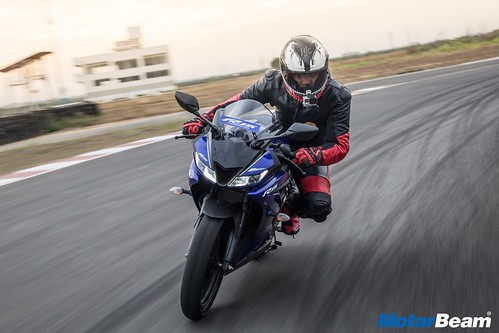 The R15 V3 gets wider front and rear tyres

Coming to the handling department, this is where the R15 V3 truly shines. The motorcycle dives into corners effortlessly holding the line no matter what and moreover, it doesn't intimidate you on the track. The 100 section (MRF) front and the 140 section (Metzeler) rubber at the rear grip the road well but the front MRF rubber was losing grip under hard braking and as a result was making the screeching noise. Better tyres can do wonders on this 150cc supersport machine. The motorcycle gets a bigger front disc (282 mm) and a 220 mm rear disc for braking duties. While the brakes themselves do a good job of shedding speeds, the lack of ABS is what will make prospective buyers probably look at a different option. Yamaha should have at least offered ABS as an option. 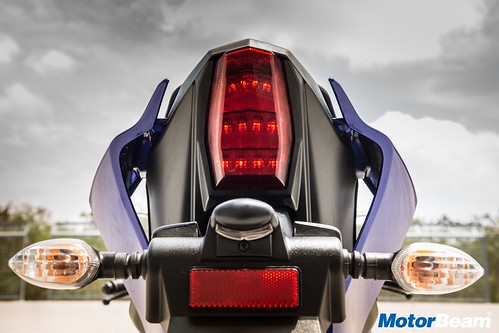 The rear winglets, tail-light, the compact headlight and even the grooves on the tank are R1 inspired

Verdict – The Yamaha R15 V3 is a bike that is hard to ignore. Leaving apart the not so comfortable pillion seat and the lack of ABS, there is nothing that we can really complain about the bike. It's got new features, new technologies, new and powerful engine and of course the new sharper and sexy looks. At approximately Rs. 6000/- dearer than the R15 V2, the R15 V3 is worth every penny spent. 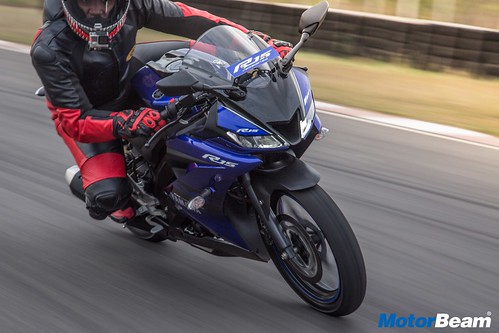 The R15 V3 is a completely new machine inside out

The Yamaha R15 V3 is targeted towards performance enthusiasts with a love for track racing. Though the new version looks slightly toned down in terms of design, there are no two ways about its performance gain and better handling. With a shorter wheelbase and light weight, the bike is easy to flick around corners while the increase in power is evident on the straights. To make the engine more tractable, Yamaha has introduced Variable Valve Actuation and added a slipper clutch to the package. Even in its new avatar, the Yamaha R15 V3 is an eye-candy and will cause a stir in the segment which has been stagnant since a long time.

QJ SRK 600 is a Benelli TNT 600i under a new Chinese brand. While Benelli is an Italian motorcycle brand, it is now owned by Zhejiang Qianjiang   END_OF_DOCUMENT_TOKEN_TO_BE_REPLACED

FCA gives mild internal updates to the Jeep Compass. It can neither be called a mid-cycle refresh nor a facelift. Yes, we are talking about the   END_OF_DOCUMENT_TOKEN_TO_BE_REPLACED