Yamaha made its foray into the scooter segment last year with the launch of the Ray. The company was very clear with the positioning of their first scooter product, targeting it at females who form a significant buying population in this segment. When we reviewed the Yamaha Ray, we were shocked to see this sort of gender bias, because the scooter is so fantastic that even male riders would love to own one. Now Yamaha has come up with the Ray Z, which is nothing but the regular Ray with a shot of testosterone, after all ‘why should girls have all the fun?’ A quick spin around Goa roads makes us love the Ray even more. 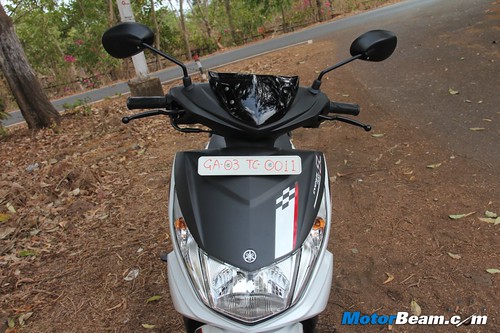 The only changes to the Yamaha Ray are on the outside. Yamaha has given some styling tweaks which has transformed the appeal of the Ray drastically. The Ray Z features a black visor at the front along with the steel wheels getting the black treatment. The instrument cluster and seat both get the carbon pattern finish, while the rear suspension now gets red coils. The body now adorns stickers all around, including a chequered flag at the rear, inspired from MotoGP. The rear grab rail is now an aluminium wing, some what of a pseudo aerodynamic part. 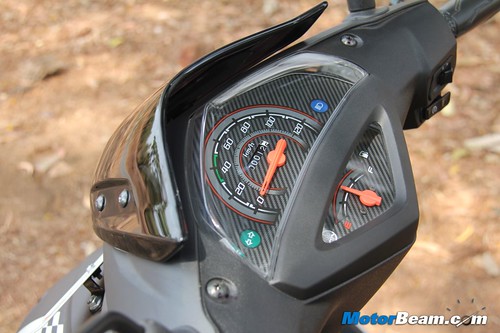 The addition of these small styling tweaks makes the Ray look so much better. The scooter does look very trendy and is quite eye catchy too. It does end up looking some what sporty, which will definitely impress the target audience, mainly young boys under 24-years of age. Three colours are offered – Regal Red, Pristine White and Black Thunder, all of them look really good on the Ray Z. 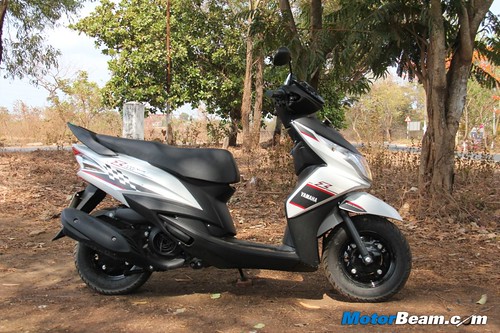 No mechanical changes have been made by Yamaha to the Ray Z, which means it continues to draw power from the single-cylinder, 113cc, air-cooled engine. This 2-valve motor generates 7.1 PS of peak power at 7000 RPM and 8.1 Nm of peak torque at 5000 RPM. Output figures might not be class leading but the Ray performs very well in city conditions and is quite quick in reaching 65 km/hr. 0-60 km/hr takes 10.84 seconds, which is faster than its closest rival (Honda Dio) by a slight margin. The Ray Z performs very well, it has almost no lag from the CVT unit and has instant response with a slight twist of the throttle. It never feels sluggish till 70 km/hr, after which the lack of horses becomes very apparent. The light 104 kgs weight means the Ray is very peppy and eager in city conditions. The company claims a mileage of 53 km/l. 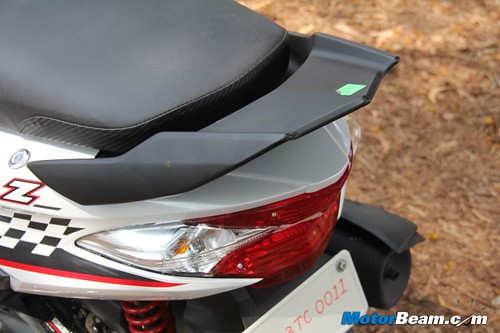 Where the Yamaha Ray really excels is in its dynamics. Compared to the Honda Dio, the Ray offers a seating position which is even comfortable for tall riders. The Ray doesn’t feel small to ride and is very easy to manoeuvre with a responsive steering and excellent handling. Inspite of regular tyres, the Ray feels very involving to ride and the chassis is well balanced offering tremendous feedback as well. The suspension is slightly on the stiffer side but still soaks up bumps very comfortably. Brakes are good with generous amounts of stopping power. The Ray Z remains composed at high speeds as well and is undoubtedly one of the best scooters to ride in the market today. 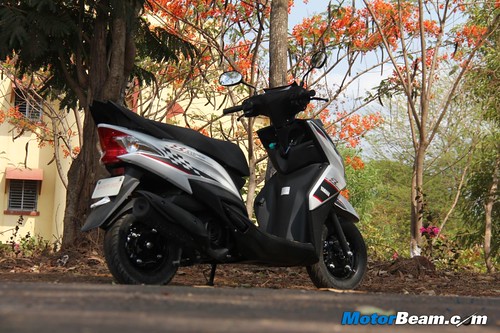 The Yamaha Ray Z is a positive step by the Japanese automaker. The company should have launched this version at the time of the regular Ray’s launch itself, as the scooter is so brilliant, it simply can’t be positioned to only one gender. Sure we desire more and better performance (read 125cc) is something which will undoubtedly make the Yamaha Ray the best scooter in the market. However with a premium of just Rs. 1750/- over the regular Ray, the Z variant is quite value for money too (on-road Mumbai price – Rs. 57,000/-). The Honda Dio is Rs. 3000/- cheaper but it doesn’t come with telescopic forks, which tilts the needle in the Ray’s favour. Now only if Yamaha churn out more powerful scooters which rivals the Suzuki Swish and Piaggio Vespa LX125.