Bajaj Auto once had a huge hold in the two-wheeler market, especially in the commuter segment but has gradually dropped down to fourth position because of a commuter motorcycle onslaught from the former partners Hero and Honda. However, the 2015 Platina 100 ES is the new refreshed kid on the block offered by Bajaj in the 100cc commuter motorcycle segment. The Platina is not the cheapest bike to be offered by Bajaj Auto as that honour rests with the CT 100. The previous model saw drop in its sales due to the increasing demand for the Hero Splendor and Passion series. But now, Bajaj is back into the game with their cheap and refreshed Platina ES (Electric Start) motorcycle which is also among the most frugal bikes in the world.

Motor Quest: The Bajaj Platina was launched way back in 2006 and managed to sell 5 lakh units in just 8 months. Bajaj took the XCD’s 125cc engine and brought out the Platina 125 which was discontinued later. There were plans of launching an LPG version of the Platina but that didn’t materialise. The latest Platina model is the 100 ES and till date more than 50 lakh units of the Platina have been sold. 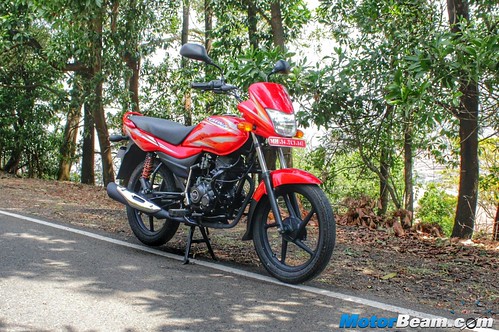 Conventional design but the black treatment does make it look good

Styling – Being a commuter motorcycle, styling and design on this motorcycle is very basic and is similar to its previous standard version except for new and simple side panels, silencer, headlamp and graphics. On the design front, the bike gets a redesigned headlight and visor. The turn indicators are new but look dated. The rear cowl and grab rails are simple and new while the new graphics do look good. The exhaust is sleeker and the heat-shield is a chrome painted steel plate fitted over it. The grey mint on the engine looks pretty good and the black alloys make the motorcycle look distinctive. Rear view mirrors and tail-light remain unchanged. The tank is well curved and the petrol cap is provided with filler-cap hinge for added convenience. So overall the Platina 100 ES is a decent looking commuter motorcycle within one’s budget. 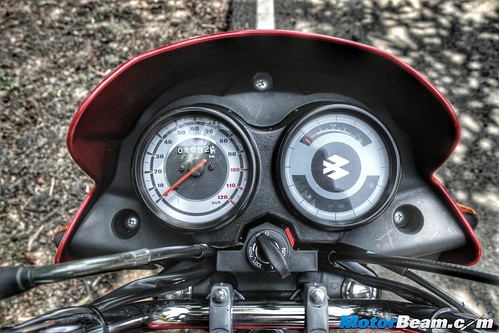 Instrument Cluster and Switchgear – The console meter on this bike is very sweet and simple, clear to read and clear to understand. There are two round pods out of which one on the left is the speedometer and to the right is fuel meter on the top in a semicircle and the lower semicircle houses neutral, high-beam and turn indicator lights. The speedometer pod houses the odometer and lacks a trip meter. The speedo is marked from 0-120 km/hr which is decent for a 100cc motorcycle and it also lacks the economy range zone in the 30-50 km/hr mark. Switchgear is kept decent and is present on both sides of the handlebar as this refreshed motorcycle gets an electric start button which is placed on the right side of the handlebar along with headlight on/off switch. The left switchgear consists of basic things like low/high beam switch, pass-light button, turn indicator switch and horn button which is seen on other commuter motorcycles as well. 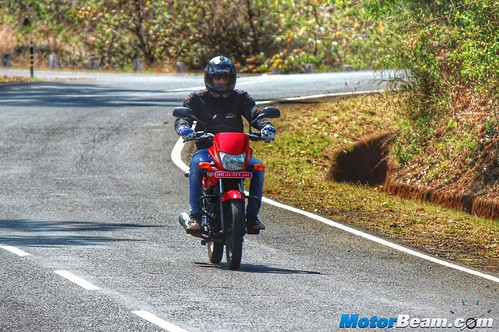 Ergonomics – The seating position is upright and the handlebar gives a very commuter and comfortable riding feel. The long seat provides good grip for both rider and pillion, in fact, it is the longest seat in the segment and Bajaj claims it to be longer by at least 20% over standard 100cc bikes (many buyers might consider this as three people on a commuter bike isn’t a rare sight in our country). The foot pegs are placed well and do not cause pain for the legs during long rides and continuous traffic riding is also an easy task. The scooped tank provides good thigh support. The motorcycle gets a body-coloured grab rail which is a single piece unit. 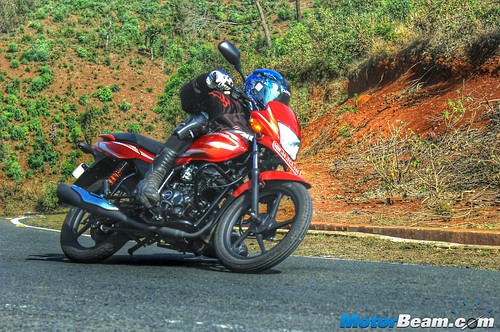 Performance – The Bajaj Platina 100 ES is powered by a new 2-valve single-cylinder 102cc engine, it uses DTS-I and thus employs twin spark plugs. The mill produces a maximum power of 8.2 BHP at 7500 RPM and 8.6 Nm of peak torque at 5000 RPM. There is a choke button which is awkwardly placed below the fuel tank, the tank capacity being a large 11.5-litres. Thumb the starter and the engine comes to life in a refined manner. The bike gets a maintenance free battery and the powerplant feels smooth too. It is more suited for city commute where more Bajaj motorcycles are seen. The powerplant produces decent torque even at higher revs but top-end performance isn’t this machine’s forte. 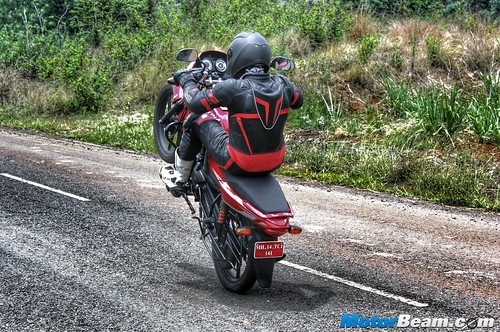 The motorcycle gets a 4-speed gearbox like other 100cc motorcycles but is a bit noisy in the first two gears. The gear shifting on this one is of all down shift pattern which will take time to get used to by regular riders but shouldn’t be an issue for new motorcycle users. The clutch impressed us with its smooth operation and you can use it with a single finger. The gear ratios are short which are suited more for city commute. First gear is very short and maxes out at 15 km/hr like other 100cc motorcycles while second, third and fourth maxes out at 25 km/hr, 45 km/hr and 80 km/hr respectively. Thus, the top speed is 80 km/hr although Bajaj claims it to be 90 km/hr. The claimed mileage of this 100cc machine is 96.9 km/l which is certified by ARAI. But, one can expect a mileage of 75 km/l in real riding conditions. 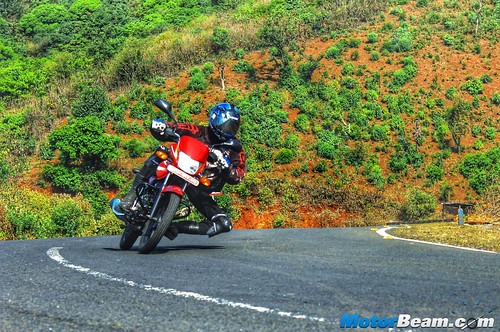 Thanks to CEAT tyres, grip levels on the Platina 100 ES are good

Riding Dynamics – The refreshed Platina 100 ES now becomes big in every dimension (length, width, height and wheelbase) and weighs just 108 kgs while the standard non ES Platina tips the weighing scale at 113 kgs. The motorcycle gets a down-tube tubular chassis which makes it weigh less, offering some fun while riding. The handle is light and with its upright and comfortable sitting position, helps the rider in quick steering in traffic, also enabling him to avoid potholes with ease. The tyres fitted on this motorcycle play a major role in such easy riding. The rubber is none other than sticky and grippy CEAT tyres. 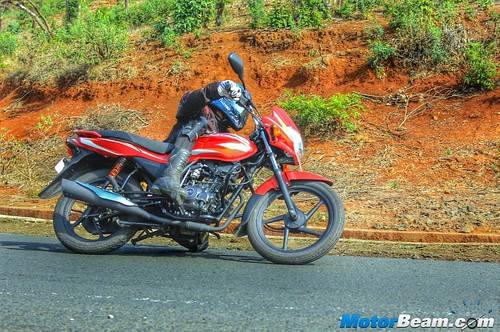 The Platina 100 ES gets telescopic forks at the front which does their duty of absorbing shocks pretty well. On the rear it gets Bajaj’s patent SNS suspension which too absorbs bumps well and helps the bike glide over potholes and bumps while providing a stable and comfortable ride. Braking on this Bajaj bike is average as it is equipped with the same sized drums at both the front and rear. The Platina ES on an average is a good motorcycle to commute daily while also offering suitable performance for occasional highway rides. 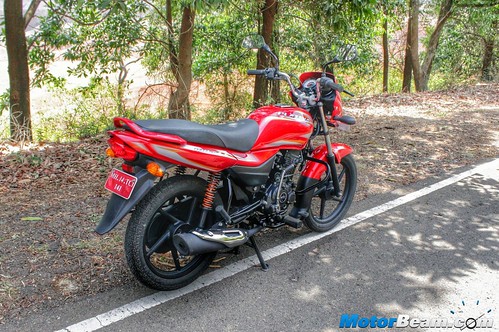 Verdict – The Platina 100 ES being a 100cc motorcycle is a worthy bike to commute on. As this is a refreshed bike with new updates and top mileage, the Platina ES will help Bajaj to get back into the volumes race again by being a successful bike in this segment. Just like most offerings in this segment, it’s not an exciting bike to ride but does fare strongly when it comes to mileage, low-maintenance and comfort. Overall, this bike has decent build quality, a refined engine and good manoeuvrability, all of which makes it an excellent commuter package. Like all other Bajaj products, the Platina 100 ES too is a value for money motorcycle.

The Bajaj Platina 100 ES is a no nonsense commuter motorcycle which is easy to ride and gets some unique features like a big fuel tank, long seat and a hinge on the fuel lid. The attractive pricing makes it a bike worth considering in this high volume segment. 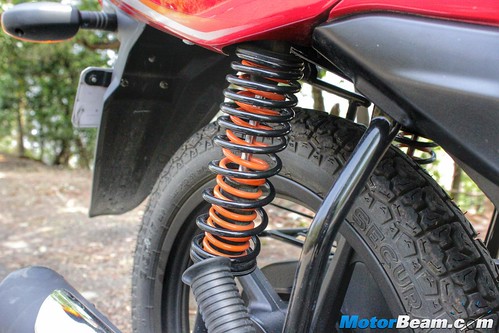 * Engine refinement and mileage, this bike sips fuel like a miser
* Ride quality is good and the bike is very easy to ride
* Priced attractively, the Platina comes with some interesting features 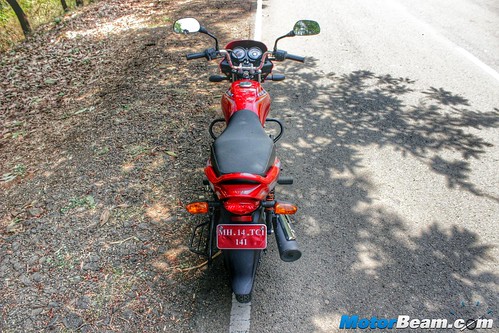