Market preferences and customer demands have evolved from time to time and currently the SUV body type has seen the highest demand showing steady growth year on year. With the focus towards more affordable SUVs, Renault and Nissan launched the Duster and Terrano respectively while Ford came out with the EcoSport. All of these vehicles have seen great demand. However, there is another segment which has opened up below them, that of pseudo-crossovers. This segment is very niche and has few options. Though these cars are not anywhere close to being SUVs, they are more for adding a SUV flair to their hatchback counterparts.

Now Hyundai has decided to enter the pseudo-cross bandwagon with the i20 Active which is essentially the Elite i20 with a shot of steroids to make it beefier, muscular and sportier. Now, even though market share in this segment is meagre, the folks from Korea want to be around even if there is little action. The likes of the Toyota Etios Cross, Volkswagen Cross Polo and the Fiat Avventura form this very exclusive segment, all of these have been derived from the respective hatchback counterparts. Is the i20 Active all show or are there some skin deep changes? We find out. 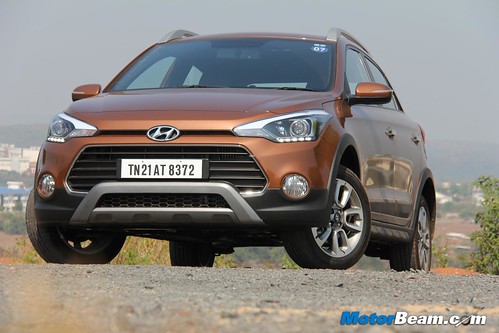 Exteriors – Exterior appeal counts far more than anything else in this segment. Hyundai has done a good job to transform the Elite i20 into a muscular and sportier SUV lookalike. The front and rear get faux skid plates along with a two tone bumper design. Hyundai has given a tusk bar on the front bumper for that SUV look. Black cladding runs along the sides while the rear bumper gets round reflectors. The most significant addition to the i20 Active are the projector headlamps with automatic function along with LED DRLs. When Hyundai had omitted these on the Elite i20, we had a pretty good guess where this was going. The i20 Active gets SUV styled large round fog lamps (rectangular in the Elite i20) with cornering function. 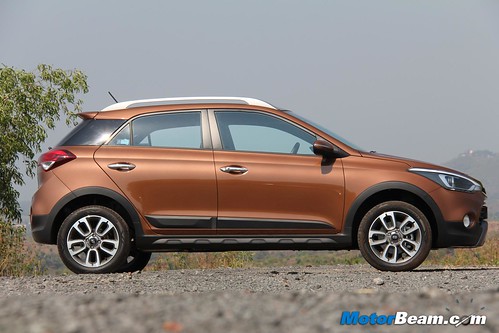 The side profile makes obvious the increased ground clearance. Hyundai has raised the ride height by 20 mm, so the Active version has a ground clearance of 190 mm against 170 mm seen on the Elite. Also seen are roof rails which add a lot of substance to the design. The muscular wheel arches look good but the 16-inch diamond cut alloys (new design) don’t seem to fill them up completely. Hyundai has also given the C-pillar a glossy finish as opposed to the matte one on the Elite i20. Even the fuel filler lid gets a silver finish. The Korean manufacturer has also added a new brown colour to the i20 Active lineup. 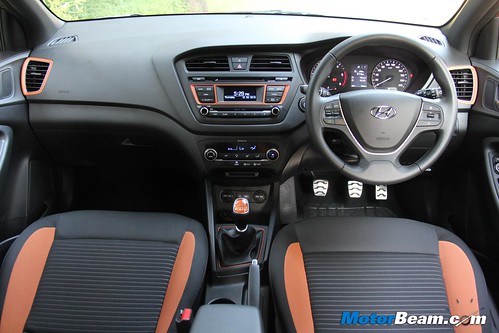 Interiors – The interior layout is the same as the Elite i20 but Hyundai has played with the colours to suit the i20 Active’s outer muscle. There are two colour combinations on offer. The lighter exterior colours such as silver and white get an aqua blue interior theme in which door mouldings, dashboard, gear knob, inserts around the side AC vents, insert around the audio head unit and the seat fabric get blue treatment. The darker body colours like the new brown and the red get tangerine orange interior theme and this is more subtle compared to the blue as only the gear knob, AC vent inserts (side vents only) and the seat fabric is coloured orange. The aqua blue feels a little too loud in our opinion. 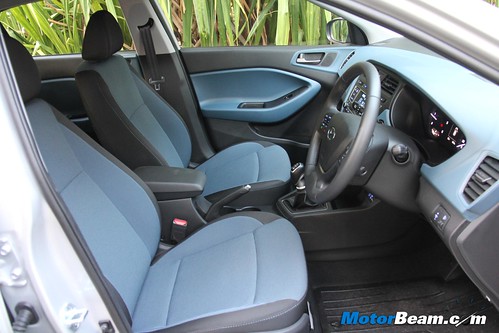 The pedals now sport a faux aluminium finish and everything else is exactly the same as the Elite i20. That means the Active version gets all the goodies from the Elite such as rear AC vents, 1 GB storage for audio system, tilt and telescopic steering, reversing camera and the list just goes on and on. The i20 Active, by far, is the most loaded offering in the segment. The boot too is the same, measuring 285-litres. 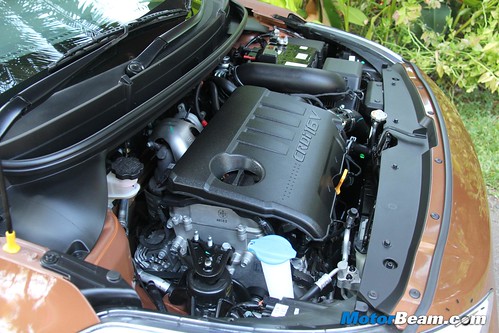 Performance – Hyundai has carried forward the same power units used in the Elite i20 but with some changes. For better responsiveness in the lower-end of the rev band and to enhance low-speed drivability, Hyundai has reduced the final gear ratio for improved low and mid-range torque delivery. This translates to a better low-end performance to the tune of 6% in the petrol version and about 11% on diesel powered cars. This is good news, especially for the petrol version since it did feel quite under-powered in the Elite. We didn’t get a chance to drive the petrol version at the drive, however in the diesel variant, the improved low-end performance was quite noticeable but comes at a minor cost of reduced fuel efficiency. The petrol model returns 17.19 km/l (Elite is rated at 18.24 km/l) while the diesel is claimed to give 21.19 km/l (a reduction from 22.54 km/l on the Elite). The above figures are as per ARAI test results. 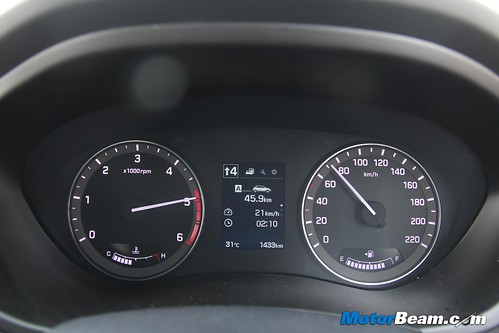 The i20 Active offers very similar performance to the Elite i20, the diesel engine is quite punchy yet frugal

Powering the diesel i20 Active is the same tried and tested 1.4-litre CRDI engine producing 90 PS of peak power and 220 Nm of torque. Mated to this engine is a 6-speed manual gearbox which offers smooth shifts with ratios balanced out for every kind of driving requirement. The acceleration in the lower gears is improved and the i20 Active feels quite at home ambling around in city traffic with barely any turbo lag. On the other hand, power feels adequate on the highway and the i20 Active pulls cleanly to triple digit speeds. NVH levels are quite good, even at higher revs. The 11% difference in performance is evident but exactly how much is it when compared to the Elite i20 is something which can be deduced only after extensive testing. The petrol i20 Active is powered by a 1.2-litre dual VTVT Kappa engine which produces 83 PS of power and 115 Nm of torque. Coupled to this engine is a 5-speed manual transmission. 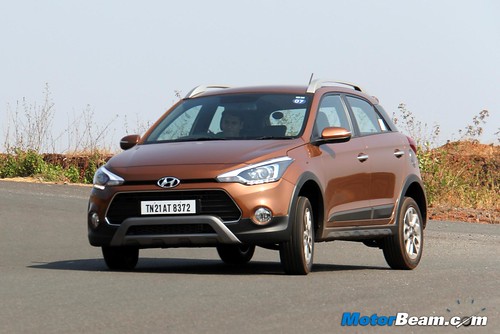 The dynamics are pretty neutral but enthusiasts will find it uninvolving

Driving Dynamics – With ground clearance of 190 mm (Elite has a clearance of 170 mm), one would expect the dynamics to suffer but Hyundai seems to have it all covered. The additional ground clearance has prompted Hyundai to increase the height of the coil springs and hence stiffen them up to suit the higher height, thereby going for a slightly stiffer suspension setup. Also, Hyundai has added a LCV (low velocity control valve) to the rear suspension which dampens the force in a more subtle manner. Translating that into layman speak, the ride quality is truly astonishing. The Active eats potholes for breakfast and stays composed on the worst of roads, barely transmitting anything to the cabin. Even at high speeds the ride remains pliant. 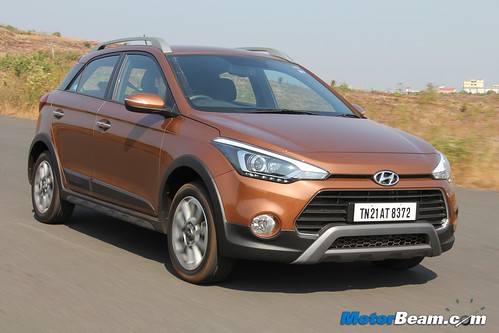 Ground clearance has been increased to 190 mm, making the Active i20 very practical for our bad roads

Coming to the handling bit, it is similar to that of the Elite. For majority of the population, the handling is neutral and high speed mannerisms are decent and most will find no complaints on that front. The steering is light at low speeds and feels reasonable at high speeds but from an enthusiastic perspective, it doesn’t really weigh up as well as say the Cross Polo, nor does the Active feel as involving to drive as some of its competitors (read Fiat Avventura). However, Hyundai has certainly made a huge step forward in the dynamics department as compared to its earlier cars. Even with increased ground clearance, body roll is quite contained. Brakes offer good bite and feel with the 195/65/16 tyres providing good grip on most of the surfaces. 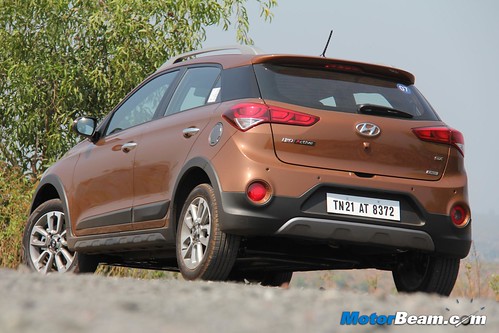 Verdict – The Hyundai i20 Active is a well rounded product which offers added muscle and sporty touches to an already established hatchback with oodles of features and practicality. With great build quality on offer, the i20 Active clearly sends a message to its rivals. Amongst all wannabe SUVs out there, the Etios Cross cannot hold a candle against the i20 Active while the Cross Polo is nothing more than a plastic job. The only real competition comes from the Fiat Avventura, which certainly looks the part and drives pretty well too but the Fiat can neither match the equipment levels nor the sales and service Hyundai offers which leaves the i20 Active as the best overall package in this segment. But the i20 Active is pricier by nearly a lakh over the Elite and this could be a bit too much for most, but the kit and quality Hyundai offers may find justification to this fact. But again, the Elite i20 is the most expensive hatch in its segment and that hasn’t stopped it from being a runaway success. The i20 Active perfectly adds SUV flair with the practicality of a hatchback and will surely shake up this small yet significant segment.

The Hyundai i20 Active will appeal to those who are looking for a good quality, no nonsense product which looks SUV to the eyes with the usability and practicality of a hatchback. 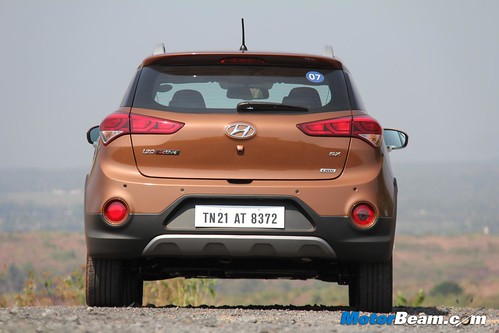 Even with the increased ground clearance, body roll is well contained 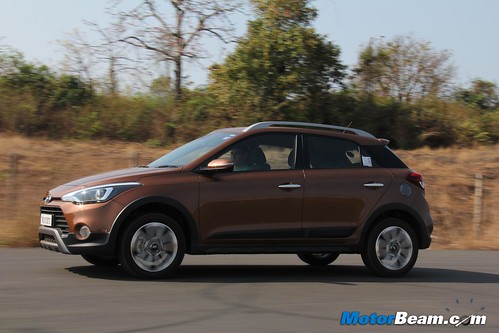