Just 17 months back we reviewed the 2014 model year Chevrolet Cruze facelift that came with mild cosmetic changes and nothing more exciting. Now, General Motors is preparing to launch yet another update of the Cruze next month with noticeable changes on the exteriors as well as interiors. The American automaker is launching the facelifted Cruze as a stop gap measure until the new generation Cruze arrives in India next year, which has already made its debut in international markets. We spend some time behind the wheel of the good ol’ diesel rocket to see what’s new on offer.

Motor Quest: The Chevrolet Cruze was launched in India in its first generation in 2009 and is produced at GM India’s Halol facility in Gujarat. The second generation Cruze made its global debut last year and will arrive in India in 2017. The Cruze is also available in a hatchback form, which is sold in some international markets. It is also sold under Daewoo and Holden brands in certain markets. 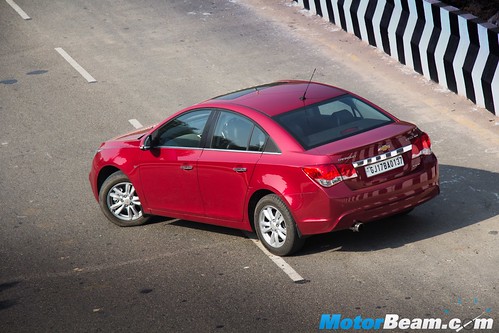 The facelifted Cruze just gets a lip spoiler at the rear

Exteriors – The latest update of the Cruze gets some prominent changes at the front which makes it look sharper and it was evident since onlookers during our test were noticing something new about the Cruze from the front. The dual port grille gets new detailing and is loaded with chrome now. The front bumper gets some aggressive lines integrating LED DRLs along with projector fog lamps. However, the headlights remain unchanged that could have got projectors as well. Rest of the styling on the side and rear remains the same save for the boot integrated rear spoiler. GM should have considered new alloy wheels too for this update. 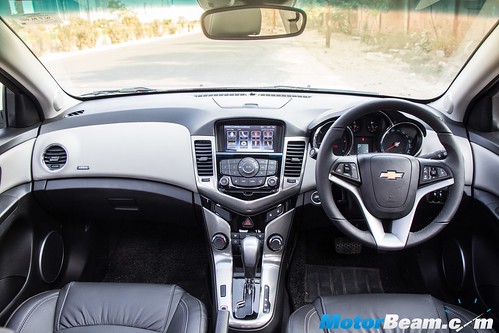 Interiors – The interiors look sporty having dark colour tones and Camaro inspired steering wheel. The layered dashboard integrating soft touch materials looks tastefully done. The shiny silver inserts in the centre console also makes the rather dated interior look fresh. In our previous review of the Cruze, we complained about the tiny multimedia display and the inconvenient interface of the same. General Motors has finally made the changes and the Cruze now gets a sizeable 7-inch touchscreen MyLink infotainment system that not only makes the dashboard look complete but also works quite well. 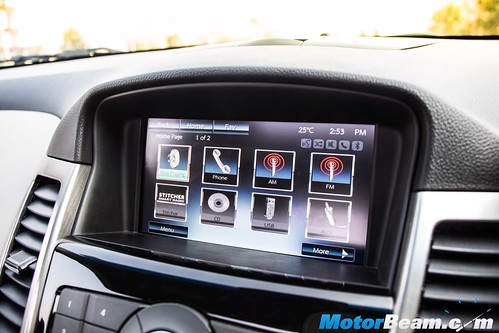 MyLink offers comprehensive connectivity options with a ton of features

We had seen the MyLink infotainment system previously in the Chevrolet TrailBlazer and now the Cruze gets a much needed update of the same. The 7-inch touchscreen comes with radio, MP3, USB, AUX and Bluetooth connectivity with audio streaming and phone connectivity. What’s special is the inclusion of embedded apps including internet radio functionality. You can operate SIRI with your Apple device hands free via the steering mounted controls for voice commands. There are vehicle personalisation settings as well and most importantly the display doubles up as a screen for the rear parking camera. The touch quality is predictable and the MyLink system makes it a much convenient cabin for the driver. 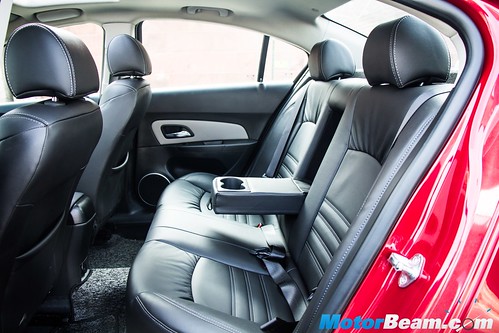 Apart from the new infotainment system and a few buttons on the centre console and steering wheel for the same, nothing else has been changed inside the Chevrolet Cruze. The all-black leather seats look very sporty and quite inviting as always. The front seats are comfortable and supportive with the driver’s side being electrically adjustable. The rear seats are however not the best in class due to limited legroom and a little upright posture with a sloping roofline that makes headroom a bit tight for tall passengers. The boot however is quite sizeable and underneath you will get a full sized alloy spare wheel. 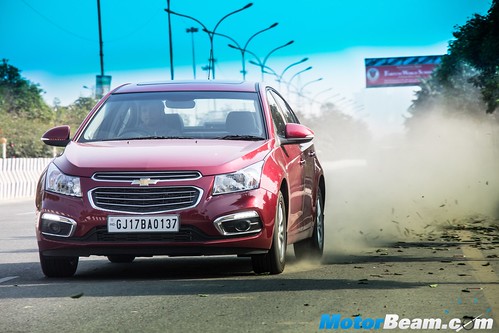 The Cruze just plunges forward when the turbo spools

Performance – The main reason behind the Chevrolet Cruze’s initial popularity in India was its ballistic performance as it was largely known as a diesel rocket. The Indian audience absolutely loves the kick in the pants feeling once the turbo spools after the lag. Yes there is some turbo lag to deal with under 2000 RPM but post that you get a sudden surge of torque that pulls the car strongly. GM India initially offered an SOHC layout 1991cc diesel engine but later updated it to a 1998cc DOHC oil burner with relatively less lag and better power and torque at lower RPMs. With 166 PS of power and 360 Nm of torque, the Cruze is still the most powerful car in its segment on paper. 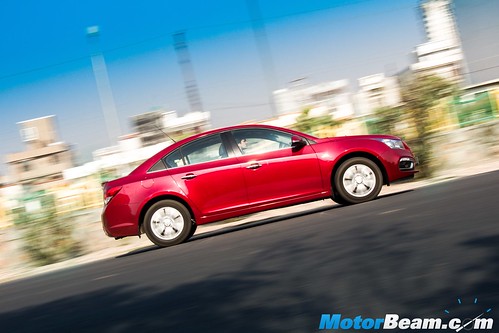 The 2.0-litre diesel motor feels quite relaxed at highway speeds

The powerful 2.0-litre diesel engine continues to put a smile on your face

In terms of NVH, the engine is quite audible during cold starts both inside out but as the engine temperature rises, it gets muffled. The mid-range is explosive while the low-end is a bit sluggish and the higher end of the rev range is not that progressive. It comes with both 6-speed manual and automatic transmission option. The auto box is quite smooth and seamless when driven sedately but takes a while to downshift. Redline comes up at 4800 RPM while it does 100 km/hr in 6th gear at a low 1500 RPM. GM claims 14.8 km/l of fuel efficiency for the automatic variant but we saw around 10-11 km/l in real world conditions. 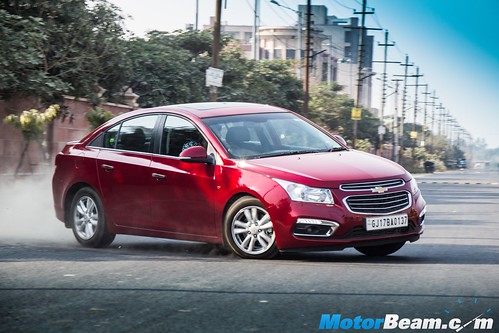 Driving Dynamics – The moment you get behind the wheel of the Chevrolet Cruze you instantly feel that you’re driving something solid. The steering feels a tad heavy at parking speeds since it is hydraulic but provides decent feedback as speed increases. While cornering though, the steering feels inconsistent and not as sharp as its German rivals. However, it is predictable and doesn’t rob away the fun of driving this josh machine. The suspension was tweaked with the last update for better ride comfort and the Cruze manages to glide over most of the undulations but some big and sharp potholes can unsettle the sedan. High speed stability is rock solid and the brakes are well calibrated too providing good feedback. There are no mechanical changes done on the Cruze with the latest facelift. 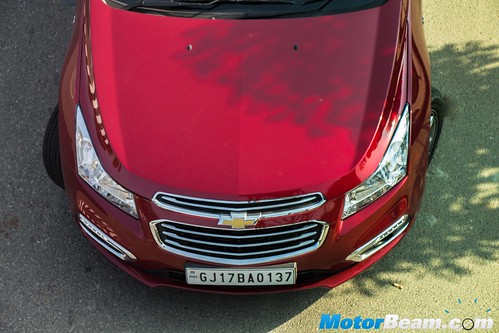 Safety and After Sales Service – Euro NCAP has given a healthy 5-star crash test safety rating to the Cruze which makes it quite safe for Indian roads. GM India offers four airbags including dual front and side airbags. It comes with ABS and EBD as standard but no electronic stability control. Promising 10 new cars by 2020 in India, General Motors is slowly but steadily improving their after sales service. The automaker recently launched the Chevrolet Complete Care program for better service support to their customers pan India. 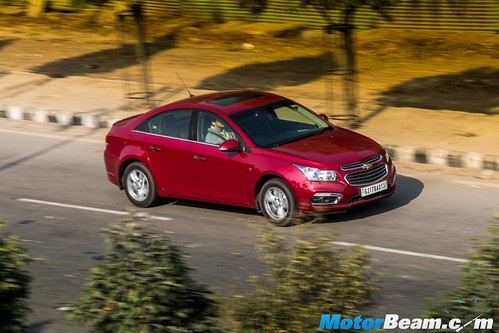 Verdict – We feel that the Chevrolet Cruze has got too long in the tooth, especially since the new generation Cruze is out in some markets. Also, the D-Segment sedan space isn’t doing quite well in our country due to the craze for SUVs. Having some serious competition to deal with, the Cruze gets a small chunk of buyers in India currently. However, the latest updates make it a better package. The Chevrolet MyLink system is intuitive to use and offers great convenience to the driver while the revised front fascia adds some freshness to the styling with a good dose of shiny chrome.

The 2016 Chevrolet Cruze facelift gets the most noticeable cosmetic update yet by GM India. The rear could have got some more changes for better differentiation though. The next generation Cruze will arrive in India in 2017, which is expected to give its rivals some sleepless nights. 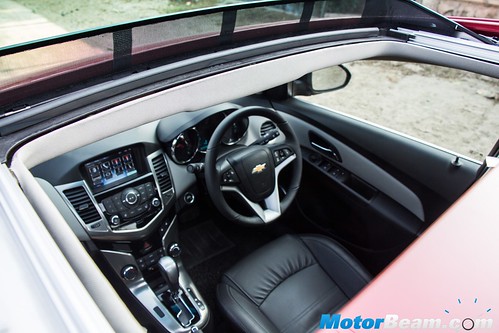 The new touchscreen adds some life to the rather old cabin 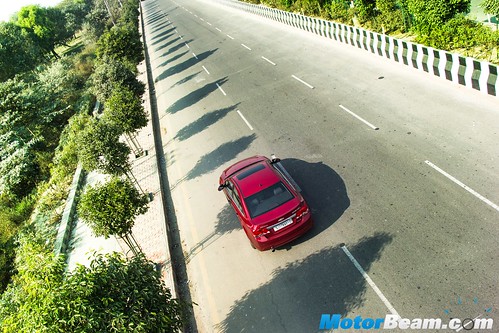 Show it a straight and empty road and the Chevrolet Cruze goes crazy!

2016 Chevrolet Cruze For China To Differ From North American Version