Harley-Davidson recently updated its Sportster range for 2016 and although the changes aren’t drastic, they go a long way in boosting the appeal of these American cruiser motorcycles. One of the most desirable bikes from the Sporster range is the Forty-Eight which emphasises on style over practicality. We had reviewed the old model just last year and now we ride the motorcycle in and around Amby Valley in Lonavala to see how the improvements have helped Harley-Davidson’s uber cool Forty-Eight.

Motor Quest: Harley-Davidson started production of the Sportster line in 1957 and the Forty-Eight was launched globally in 2010, being introduced in India in 2011, the 2016 update being its first in 5 years. Also known as XL1200X, Sportster models are part of the XL series. 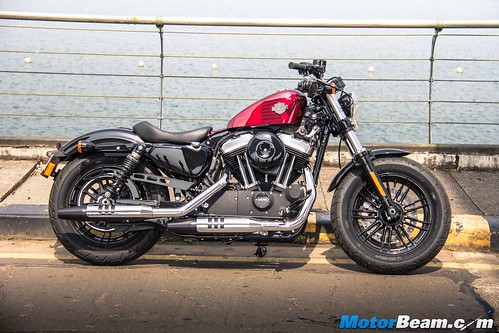 Look at the attention to detail, this bike is a design masterpiece

Styling – There is absolutely no denying that the Forty-Eight’s design is what makes this Harley-Davidson motorcycle so attractive. There are the classic cues which make it stand out and this bike looks like a customised offering. The fat front tyre, small peanut tank, under-mount mirrors, low handlebar, chopped fenders, chrome engine, blacked out exhaust (with a chrome shield) and single seat are just few of the things you don’t see on a stock bike, more so a Harley. Going against conventional thought, Harley has done a good job of designing a bike which onlookers instantly connect to. For 2016, the spoke wheels have been replaced with cast aluminium wheels resulting in tubeless tyres and a reduction of weight by 3 kgs. The only place where the colour changes is the tank and thus there are six colours on offer. 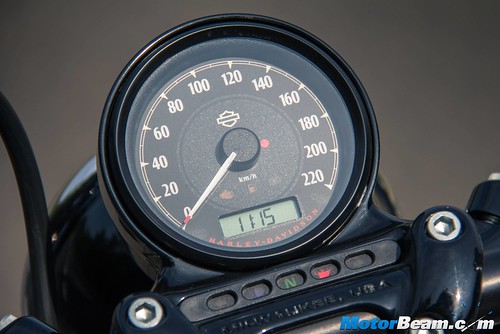 Plain and simple console, yet carries all the basic essentials

Instrument Cluster and Switchgear – The console is the same as before so there is just one round meter with a small LCD display in it. The speedometer takes centre stage while below the round pod are the tell-tale lights. The display on the cluster shows a lot of information including clock, odometer, trip meter, gear position indicator and a digital tachometer too! The low fuel warning light is inside the meter and you will see it blink quite a lot because of the small 7.9-litre fuel tank (no lock or hinge for the fuel cap). Switchgear quality is good and there are self cancelling indicators on offer which work quite well. 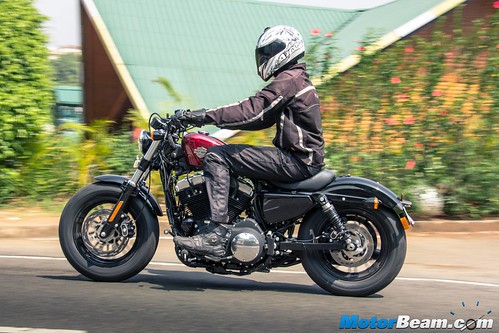 Ergonomics – The Forty-Eight is a bike best used for short distances, something which the small tank range indirectly hints at. There is no pillion seat but one can opt for it as an accessory (a Rs. 20,000/- expense) while the rider’s seat now gets improved cushioning with a higher curve at the rear, only lacking majorly when it comes to the seating posture. You sit upright but the handlebar is low, so there is a lean forward position. The footpegs are forward set and this feels a bit out of place as the Forty-Eight isn’t a typical cruiser bike either. The build quality is good with fit-finish having nothing to complain about. 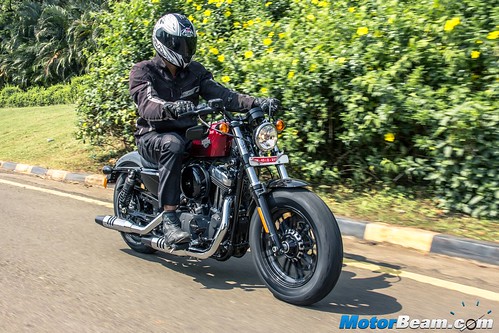 Same motor has been carried over, could do with more juice

Performance – Harley-Davidson has made no changes to the engine of the Forty-Eight which employs a 1202cc, air-cooled Evolution motor that is fuel-injected. Power figures aren’t revealed as always but a peak torque of 96 Nm is available at 3500 RPM. Start the motor and it comes to life with a roar, vibrating a lot, sending power via a belt drive. These vibrations are not felt much in the mid-range as one enjoys the pull of the cruiser. But in the top-end, the vibes are quite disturbing and since the gearbox is a 5-speed one with rev limit coming in at around 6000 RPM, riding past 120 km/hr on highways isn’t an easy task. Thus, it’s best to cruise between the 100-120 km/hr range. There is good amount of acceleration when you need it and a quick twist of the throttle sees the Forty-Eight lunge forward with enthusiasm. 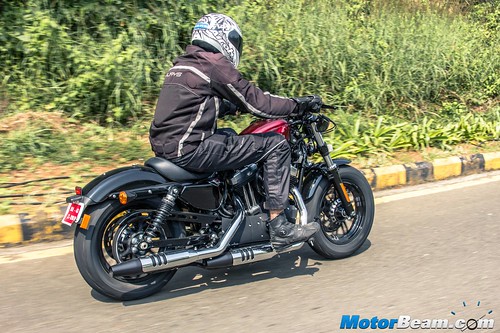 The exhaust note is typical Harley, most will like it

As expected, mid-range is the strong suit of this 1.2-litre V-Twin powertrain

First gear takes you to just under 85 km/hr while second will take you past the ton. We estimate this bike to pack in around 65 horses. The V-Twin motor is wide, due to displacement of course and riding in the city can roast the rider’s thighs as the air-cooled unit does transfer a lot of heat. The po-ta-to sound from this American cruiser is a treat to the ears and is something which immediately draws a lot of attention from those around. The gearbox isn’t smooth and you can hear metal moving every time you change cogs, the clutch being on the heavy side too. A mileage of 18-20 km/l is what this bike returns, that coupled with the ridiculously low fuel tank size of 7.9-litres gives it a rather poor range per fill. 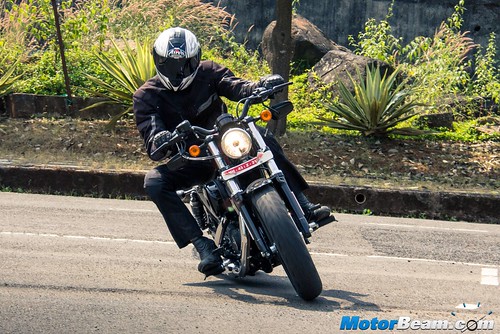 Riding Dynamics – Harley-Davidson has worked on the suspension of the Forty-Eight to improve the ride quality. The last time we reviewed the bike, we felt there were no shock-absorbers on board as the ride quality was extremely stiff. There certainly is improvement in this regard as the bike feels less harsh than before, thanks to the revised suspension mount, wider 49 mm front forks (a 10 mm increase), adjustable rear suspension and a new triple clamp. The handlebar which isn’t wide, has been revised and a lighter fork brace has been added to the front along with revised steering geometry for easy manoeuvrability. Thus, one doesn’t really feel the 252 kgs heft of this bike, unless when taking a u-turn. 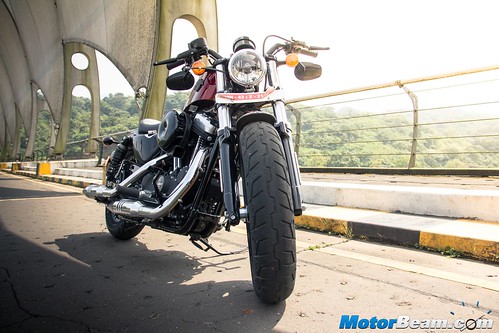 That fat front tyre is more of an aesthetic play, offers good grip

Still, the Harley-Davidson Forty-Eight is a stiff motorcycle to ride and one needs to exercise caution over bad roads. The changes to the suspension do improve the ride but the handling remains almost the same as before, the fat front tyre being more of an aesthetic addition than a one providing added grip while cornering hard. Again, cornering hard is restricted as the front-set pegs scrape on the slightest of lean but grip levels from the Michelin Scorcher tyres are good. There is plenty of wind blast at speed which is expected but stability is good. Braking performance is reassuring and the improved suspension prevents much nose dive under hard deceleration. There is no ABS on offer, not even as an option although the same is offered globally. The poor 110 mm ground clearance means that you will almost always scrape the underbelly on speed-breakers if you are not going super slow or at an angle. 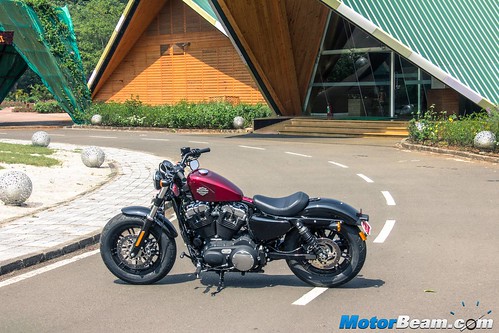 For those looking to make a statement, the Forty-Eight excels

Verdict – People tend to associate cruiser bikes with the ability to munch miles and although Harley-Davidson makes cruiser motorcycles, the Forty-Eight is one exception. This bike isn’t going to take you from one place to another in comfort and if you decide to ride from one city to another, you will end up spending quite sometime at the fuel pump, refuelling that small yet stylish tank. The Forty-Eight with the updated suspension still isn’t a bike which will keep you stress free on our bad roads so comfort is far from being the focus here. Practicality thrown aside, the Forty-Eight puts one back in the day when motorcycles were build for the pure essence and not to be a do it all machine, this Harley carries those roots. You let go of usability for being cool and the styling is the big highlight here, the custom looks somewhat justifying the Rs. 1 million plus price tag.

The Harley-Davidson Forty-Eight is as cool as cool can be. It’s not a bike you buy with your head but it purely appeals to the heart with its unique retro design and punchy performance. 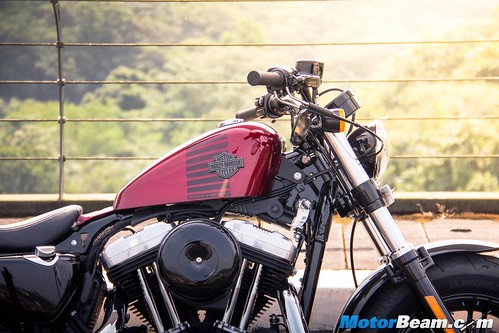 It might carry very little fuel but look at it, sexy tank this

* Gorgeous design, looks like an expensive custom motorcycle
* Powerful engine packs in a seriously punchy mid-range
* Sounds pleasing and the exhaust note also alerts others in a good way
* Good fit-finish, quality levels on the Forty-Eight are good

* Stiff ride quality, this bike doesn’t like bumps at all
* No ABS offered in India, although other countries get it as an option
* Insanely small fuel tank limits riding range 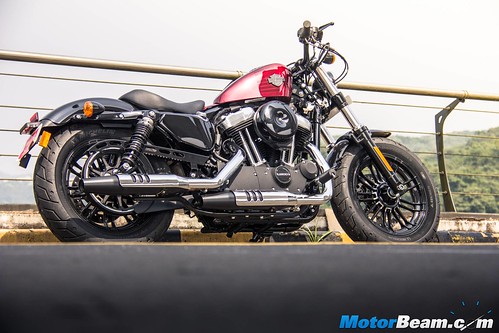 One of the best views of this ‘Hot Rod’ inspired motorcycle 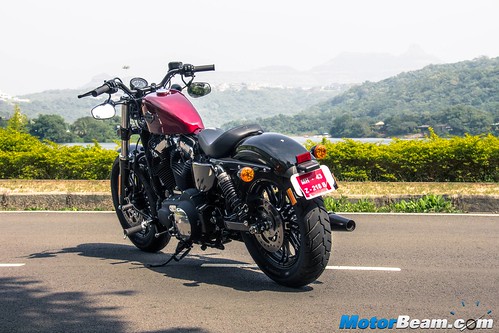 Where are the mirrors? They are mounted upside down!

“Bikes and practicality is not something which always goes hand in hand and the Forty-Eight is among the least practical motorcycles you can buy. But the trade off is worth it for you get a lot of cool in return. In spite of being hard-edged in terms of ergos and ride quality, the 48 doesn’t disappoint when it comes to performance and does pull when you hit the sweet mid-range. For those looking for a custom bike, this Harley makes for a great alternative.” – Faisal Khan, Editor, MotorBeam.
“The first glance of the Forty-Eight took all the attraction. The 48 actually stood out of the lot, thanks to its heavy front with the super huge tyre. The air-cooled engine does vibrate a lot, transferring all the vibes all over the bike. The small fuel tank is a bit disappointing as this would lead to more frequent fuel stops. This bike does have a soul but it’s not meant for everyone, it’s a weekend bike for those who like to flaunt.” – Dhanil Vira, Road Tester, MotorBeam. 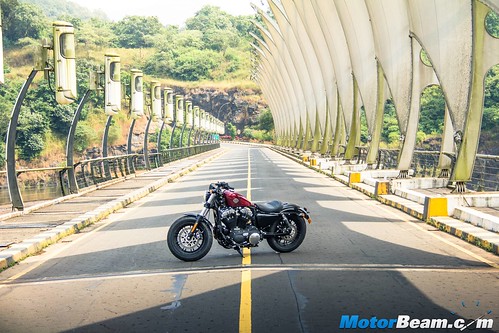 Caption that! An empty road and a powerful Harley motorcycle