The Toyota Etios has always been known for its practical, reliable and efficient nature but the sedan has never been known for its sales in the private segment. Toyota has sold lots of copies of this car but most of the sales have gone to the commercial segment where fleet buyers have been lapping up the Etios left, right and centre. In a bid to increase the vehicle’s appeal for private buyers and to give it a more premium touch, Toyota recently gave another update to the Etios and this time around it is called the Platinum Etios.

Motor Quest: Toyota cars have always been known for their superior reliability and hence the Etios is widely preferred by fleet buyers because it offers a hassle-free ownership experience. However, Toyota wants to generate more sales from private buyers too, which is the reason for this facelift. 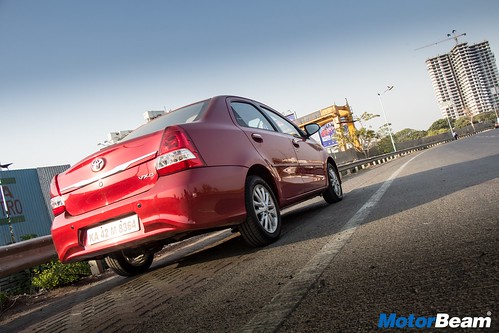 The bumpers look wider than before, some additional inserts on offer

Exteriors – The front fascia now gets a redesigned bumper and grille which make the car look better. The bumper is wider and comes with black inserts which kind of break the monotony. However, no changes have been made to any of the panels. The side profile looks similar as before while at the rear you get a restyled bumper and a chrome + reflector strip on the boot lid. There are no other differences but even these minor changes give the Etios a marginally higher premium appeal. 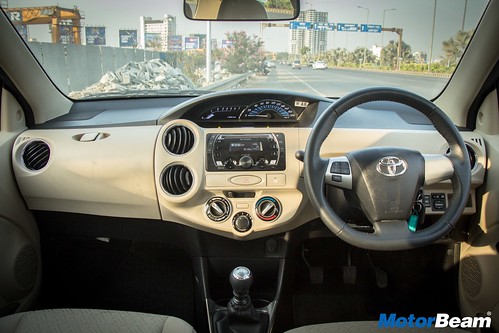 No major changes have been made to the interiors

Interiors – Moving inside, you still get the odd-looking dashboard from the older car. However, what you also get is a completely redesigned instrument cluster which looks far better than the older one. However, it is still placed in the centre. The texture of the seat fabric has also been given a change. The seats of the Etios are large and comfortable while space and storage areas in the cabin are also found in abundance. Some noteworthy features include electrically folding ORVMs, standard ABS with EBD, ISOFIX mounts at the rear, and a three point seat belt for even the fifth passenger. You also get an 2-DIN audio system with decent quality speakers. The AC does its job well most of the times but on a really hot day, I found it struggling to chill the cabin.