Bajaj Auto with their focus of massification of bikes in India have played a great role by bringing the Pulsar series. Even after years, Bajaj hasn’t stopped, instead added more bling to the Pulsar by bringing in the RS and AS motorcycles. The focus on massification has brought up a commuter-tourer-adventure motorcycle, the Pulsar 150 AS. A motorcycle with an adventure feel, touring capabilities while being much of the commuter offering it is popularly known to be. Now this motorcycle happens to be totally new from the inside as well as outside but is the Pulsar 150 AS a leap in the right direction?

Motor Quest: The Pulsar 150 was first launched in 2001 and has got lots of cosmetic and feature updates over the years under the UG naming scheme. The Pulsar AS 150 is a totally new product and is the second generation of the Pulsar 150 after 14 years. 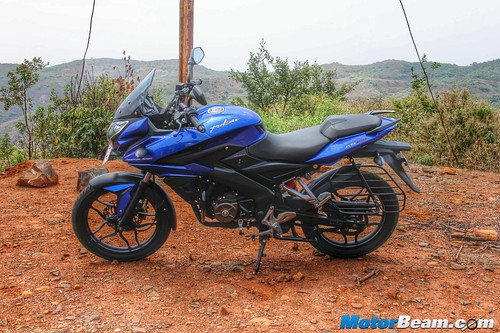 Styling – Bajaj Auto have come a long way while designing the Adventure Sport series. Keeping the old Pulsars design in mind and also getting in flow with the current generation of the Pulsars, the NS and the RS. The new AS gets semi-fairing with the same perimeter frame and design clues from the NS. The front semi-fairing holds a big headlight with a projector headlamp and a big clear visor on the top, the fairing is huge but has the aerodynamic design cues and lines, making it more attractive. The tank is also re-worked to match the semi-fairing. Coming back to the headlamp, twin pilot lamps are LEDs, the projector is a halogen with a high beam reflector on the top. 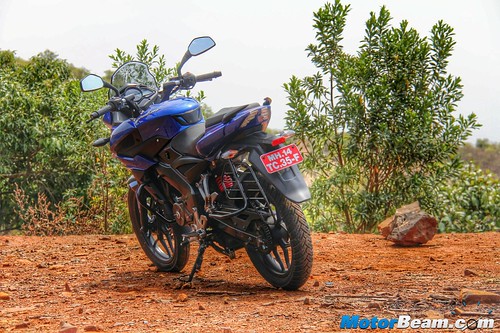 The Pulsar 150 AS happens to be the only bike with a projector headlamp in the whole 150cc segment. Rest of the body panels from the mid portion to the rear tail lamp happen to be exactly identical to the 200 NS. While the rear hugger has been taken off and a longer mud-guard is provided, the smaller tyres rob away the macho appearance seen on the 200 NS. The wheels stay the same with 10-spoke alloys while the under belly exhaust has a similar outlet and design, both of these are again very much identical to the Pulsar 200 NS. Fit-finish levels of the semi-fairing is decent but there were some panel gaps on our test bike. 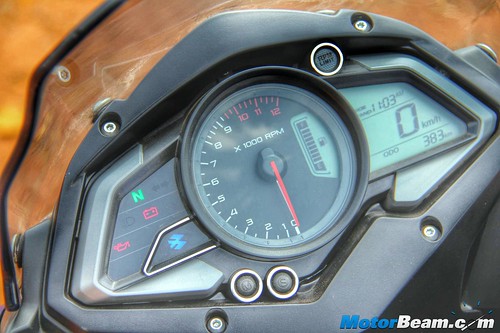 Same instrument cluster as the other second generation Pulsars, nice

Instrument Cluster and Switchgear – There is no drastic change here as it is the same semi-digital instrument cluster which happens to do duty on the NS and RS. The placement for the same is done on the fairing like the Race Sport Pulsar, making the handle lighter. The switchgear and their quality remains the same while the backlight and rest of the items are very much identical to the Pulsar 200 NS. During the recent advancements, the quality of the switch gear has improved marginally. 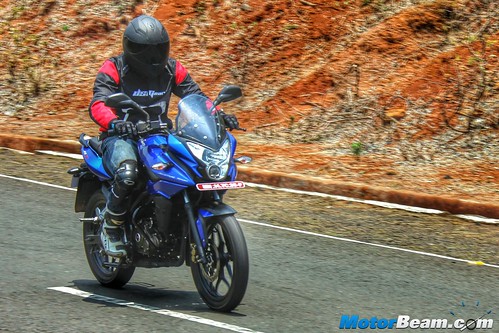 Ergonomics – The Pulsar 150 AS being an adventure tourer cum commuter, probably has the best ergos so far. Upright seating position, clip-on handle bars (finished in black), tank curves that give good tank grip and medium-soft seat with some under-thigh support really help. Anyone, be it a young biker or an elderly person, will accept the feel of the bike immediately. The suspension setup is the same like the 200 NS and the bike misses out on the long-travel proposition which is expected from an Adventure machine. But with the tourer focus, the overall setup of both the front and rear suspension is plush. 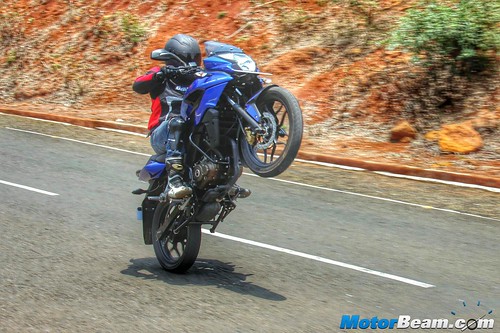 Performance – The 150cc mill of the Pulsar 150 AS is all new. It’s nothing like the old Pulsar or current 150cc motor on the Discover 150. The powerplant is brand new and packs a lot of power, a class leading 17 PS coming out at 9500 RPM while the torque figure of 13 Nm hits its peak at 7000 RPM. At 10,000 RPM the rev limiter flashes but the bike pulls till the 11,000 RPM mark. The engine has a longer stroke and hence top end power is lost out a bit but the 4-valves help give it decent top-end performance. The mid-range is the strongest and the best part of the power band is between 6000-9000 RPM, where the bike performs really well. 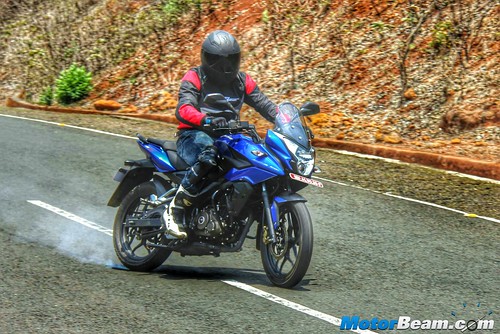 Power comes in at higher revs, making the AS 150 much more of a tourer

The engine is great and much more refined than the older Pulsar 150 and also has much better NVH as it cools down quickly due to the wavy engine fins which are the same as the ones seen on the new Discovers. The underbelly exhaust does sound loud on higher revs but the refinement keeps the sound low. The longer stroke also makes a better proposition for smoothness. There are vibes felt at the handlebars and footpegs but they happen to be very less compared to the older Pulsar 150. The engine opens out a bit on the higher side (thanks to 4-valves) and power delivery is linear throughout. This motorcycle should return upwards of 50 km/l in normal day to day riding. 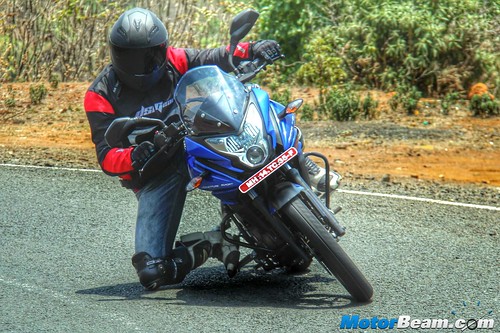 Riding Dynamics – As the bike has very good ergos, riding the Pulsar 150 AS happens to be much more enjoyable. The suspension setup on this Pulsar is soft or can be said bouncier but the 143 kgs of kerb weight is a good match. The rear suspension is a gas-charged mono-suspension, means more stability and comfort. Thinner tyres means lesser confidence but the MRF rubber does provide ample grip. Taking sharp corners doesn’t require much effort while pulling into one does require some efforts, the Pulsar 150 AS scraping its main stand when you lean hard. The 240 mm petal type disc at the front and a 130 mm drum at the rear provide decent stopping power but given the Pulsar is about value, a rear disc should have been offered. 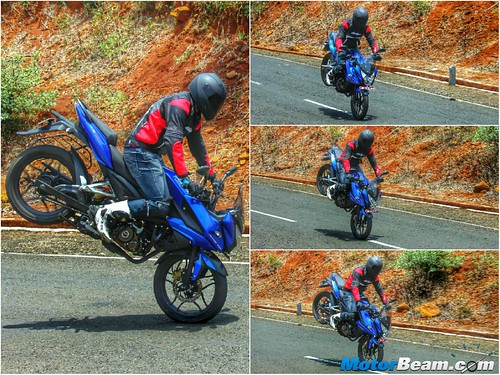 The Pulsar 150 AS being made with an adventure intent isn’t a game player, it’s more of a tourer bike. The bigger windscreen and the semi-fairing do help in good aerodynamics and the weight being a kg less than the older Pulsar 150 makes it much faster in responding to rider inputs. And with speed there is a need for better stability. The Pulsar AS 150 having much lower centre of gravity, hence it provides good stability and better braking confidence. With stability taken into consideration and the specs put up on the bike, handling and feedback is much better. This 150cc bike does have some road presence. 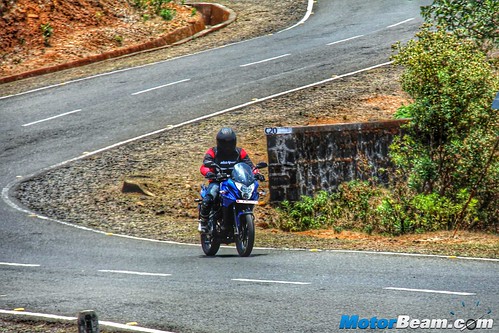 Verdict – The most preferred motorcycle by a youth or an elderly person who just wants something a bit powerful and stylish is what goes for the Pulsar 150 AS. This bike is the first thought whenever planning for a new bike in the 150cc space. The Adventure Sport series has given Bajaj a good proposition for customers to enjoy an all-rounder. The AS 150 happens to be the most value-for-money proposition in the 150cc segment. The only one in the segment to have projector headlamps, petal disc brake and a perimeter frame, it also gets an appearance enhancing semi-fairing with a large visor. Bajaj Auto is into massification of motorcycles and the Pulsar AS 150 happens to be another great key to its plans.

The Pulsar AS 150 is an all-rounder and a great introduction into the company’s expanding Pulsar lineup, It is the cheapest of the new generation Pulsar motorcycles and also is the most value-for-money offering in its segment. 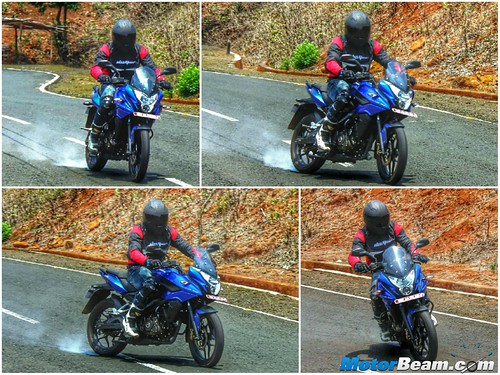 * Thin tyres when its rivals from Japan offer very wide rubber
* Lack of rear disc brake, not offered even as an option 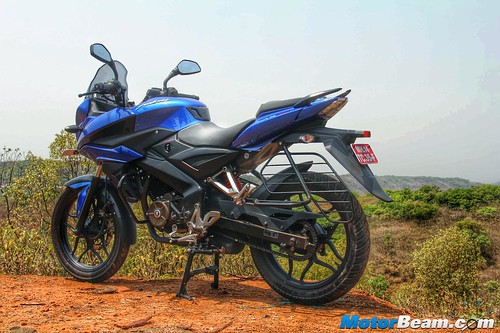