Shootout: Maruti Swift vs vs Ford Figo vs Hyundai Grand i10 vs Tata Bolt

The hatchback segment has seen quite some action of late with new models or updates to existing cars coming through. The segment leader has been the Maruti Swift for a long time now and although rivals have tried their level best to uproot the Indo-Japanese automaker, they haven’t been successful. Now Ford has launched the second generation Figo, a car which looks very promising indeed and packs in all the right ingredients to become the new segment king. Fighting it out with Tata Motors and Hyundai’s best in the segment, the Bolt and Grand i10 respectively, the all new Ford Figo has to contend with some impressive products to reach to the top. 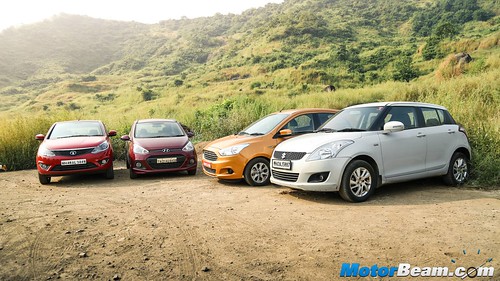 Styling – All these cars are good looking in their own right but the Ford Figo easily outdoes them with its fresher styling and Aston Martin inspired looks. The Swift’s age has started to show while the Bolt reminds one of the Indica/Vista. The Grand i10, although a good looking car doesn’t have the athletic appeal of the Figo whose large grille, sweptback headlights, bonnet bulge, beefy bumpers and well proportionated overall profile makes it standout amongst its rivals. In this orange shade, the American hatch looks quite striking indeed. 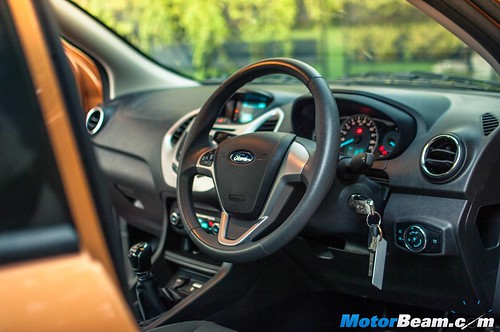 Interiors – The Grand i10 is the only car which makes do with dual-tone interiors which give it an airy feel while the other three cars get a more sporty looking cabin, thanks to the all-black interiors. While the Bolt lacks storage bins on the inside, the Hyundai offers the same in plenty, the Grand i10 also boasting of the most equipment in the segment. Some unique features to the Grand i10 include the 1 GB storage for the audio system, rear AC vents and cooled glovebox. The Swift and Grand feature reverse parking sensors, keyless go, push button start, electromagnetic tail gate opener and dedicated door lock/unlock button which is missing on both the Bolt and Figo. The Grand i10 does miss out on a climate control AC, distance to empty meter and adjustable front seat headrests while the Ford and Hyundai don’t get a split folding rear seat (they fold down in a single piece). 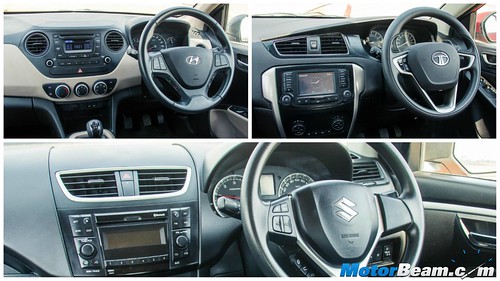 Equipment levels are abundant on all these hatchbacks

The Bolt carries some unique features too like delayed wiper swipe, projector headlights, LED number plate lights, Cornering Brake control, guide lights and an illuminated key ring. The Tata has the most features in its infotainment system with excellent sound quality for a stock unit. The only unique features in the Swift are the two cabin lights and chilled cup holder. There are some unique features in the Figo too, like MyKey, SYNC voice commands and the first in segment six airbags. The Hyundai boasts of the best quality while the Figo’s build is the most superior here. The Ford also excels when it comes to legroom and knee room at the rear while also having the biggest boot of this lot. The Figo doesn’t have the best headroom though as the Grand fares better in that regard while the Bolt has the widest cabin, making three passengers at the rear a comfortable fit. 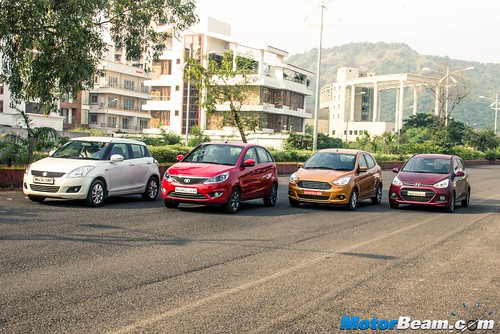 Performance – Petrol power on all these four cars come from 1.2-litre engines with the Tata Bolt being the only one that is turbocharged, it also gets segment unique multi-drive modes. The Revotron mill is not only the most powerful here with 90 PS but also has drastically more torque on offer (140 Nm). However the engine is a bit down on hardware, having a cast iron block and 8-valves. In comparison, the Figo’s unit has excellent low-end performance but lacks punch on the highways, it packs in 88 PS and 112 Nm. The Grand i10 might be the least powerful here with 83 PS and 114 Nm but has good performance for both the city and highway. Still, it’s the Swift’s K-Series mill (84.3 PS and 114 Nm) that excels here by offering the most exciting performance. The Maruti hatchback is also the most frugal, returning an ARAI certified 20.4 km/l against the 18.9 km/l, 18.16 km/l and 17.57 km/l on the Grand i10, Figo and Bolt respectively. 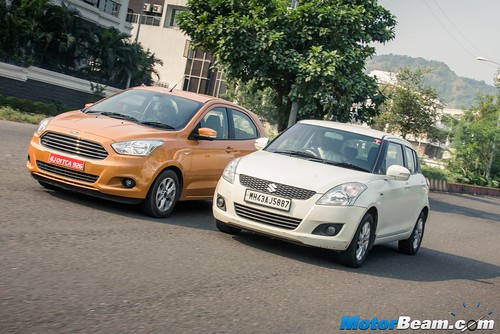 The Grand i10 also comes with the option of a 4-speed automatic gearbox with the same Kappa engine while Ford offers a bigger 1.5-litre petrol unit (112 PS, 136 Nm) on the 6-speed dual-clutch automatic, this is a league ahead than the Korean car. The same also reflects in the mileage, in spite of the bigger engine, the Figo AT returns 17 km/l against the dated autobox equipped Grand i10 that manages 16.95 km/l. Coming to the diesels, it’s yet again the Hyundai Grand i10 which has the least output and is also a cylinder down, displacing 1.1-litres while generating 71 PS and 160 Nm. Meanwhile both the Bolt and Swift share the same diesel mill, the 1.3-litre oil burner belting out 76 PS and 190 Nm. While the Grand i10 has good low-end performance, the Swift has a good mid-range and the Bolt beats both in drivability. 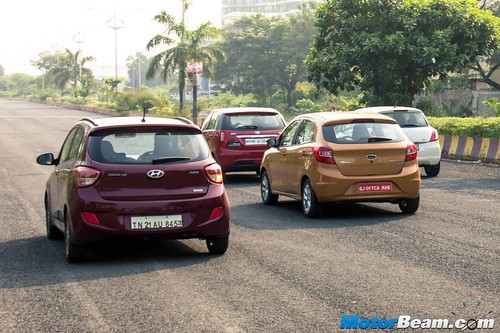 The Grand i10 feels underpowered in front of the other cars

However, beating all three in drivability, mid-range performance and outright acceleration is the 1.5-litre diesel mill in the Ford Figo that outputs a segment best 100 PS and 215 Nm. As expected, the American car easily outruns all its rivals in the 0-100 km/hr run, taking under 10 seconds (9.66 seconds) to do the sprint to the ton. That’s not all, it also beats other diesel hatchbacks when it comes to in-gear acceleration, being considerably faster in all gears, as can be seen below.

It’s only the Swift which lacks low-end grunt as turbo lag is very evident but the Maruti has the best top-end performance here. The Figo is the most frugal of this lot, returning an ARAI certified 25.83 km/l against the 25.2 km/l, 24 km/l and 22.95 km/l on the Swift, Grand i10 and Bolt respectively. Petrol or diesel, the Grand i10 has the best gearbox of the lot with the lightest clutch. 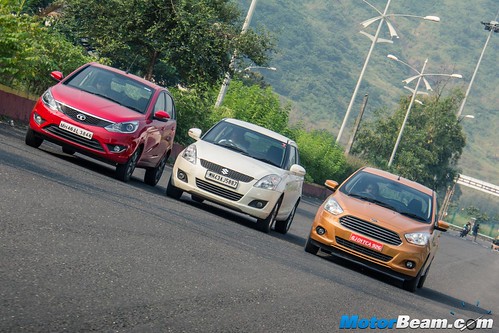 These are the cars which will keep you confident while driving

Driving Dynamics – The Swift is known for its fantastic handling and good steering while the Grand i10 is known to lack in the same department, the Tata betters the Hyundai but doesn’t match the Maruti. While these things remain intact, the Figo manages to better the Swift in both handling and steering feel although it’s not as sharp as the first generation model. The Ford also has a better ride quality than both the Hyundai and Maruti cars but the Tata Bolt boasts of the most comfort from its well tuned suspension, absorbing the worst of bumps without a hitch. 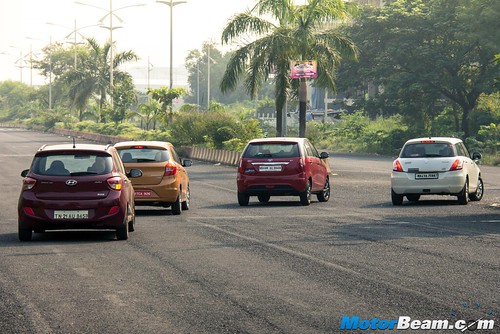 The Bolt is hard to beat in ride quality, it’s by far the best

The Indian car also excels when it comes to high speed stability, the higher weight helping, while the Figo follows a close second here too. NVH levels are very good in the Grand i10, followed by the Bolt and Figo while the Swift doesn’t have the best insulation here. Braking performance is the best in the Figo but the ABS unit is a bit over sensitive and kicks in early. Still, the Figo posted the best 80-0 km/hr timings with the Bolt being quite near it. The Ford stopped in 2.63 seconds while the Bolt, Grand i10 and Swift followed took 2.76, 3.03 and 3.15 seconds respectively. Grip levels are the best in the Bolt with the best tyres on offer. 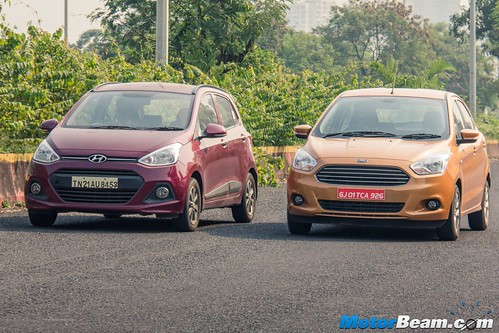 Safety and After Sales Service – Maruti rules the roost in terms of service while Hyundai comes second. Ford has done very well to improve its service and the use of child parts has made it the cheapest car in the segment to repair. Tata Motors still has a lot to do in this department and comes in last here. In terms of safety, the Swift and Grand i10 aren’t as strongly made as the Bolt and Figo. Among the Ford and Tata, the Figo fares better in safety as it comes with six airbags as an option on the top trim and also gets MyKey which limits the top speed of the car (also restricts audio volume). Hyundai is the only car maker here who doesn’t offer airbags as standard, the passive safety equipment being optional on the top trim. 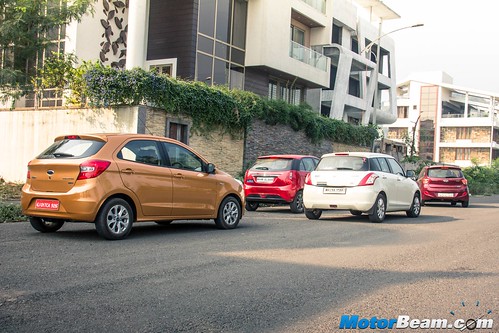 The Ford Figo is the best package in the hatchback segment

Verdict – The Hyundai Grand i10 was our pick of the segment earlier as it offered more bang for the buck than the Maruti Swift and Tata Bolt. But Ford has done a fantastic job by taking the benchmark a level up with the second generation Figo. The all new model boasts of the best balance of ride and handling in the segment while also having the best safety equipment on offer. The American automobile further excels when it comes to build quality, space, diesel engine performance and all that comes at an attractive price, making it our clear winner in this shootout. Who could have thought, a 100 PS diesel hatchback would be affordable, practical, fast and well equipped.

The competition might be intense but Ford’s Figo has many segment firsts which make it the best of its class. From being the only car with a 100 PS diesel to boasting of 6 airbags, the North American vehicle excels in multiple areas, thus being the new pick of the hatchback segment. 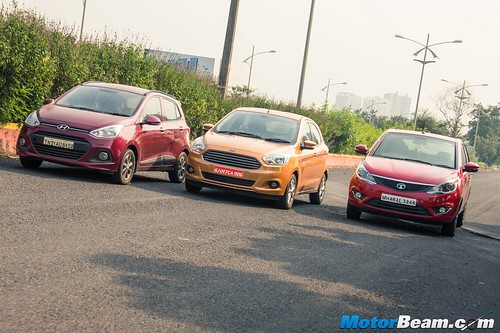 “Among these four hatchbacks, I would easily pick the Ford Figo as it offers the best of everything. The biggest attraction to the Figo is that hoot of an oil burner that not only outruns everyone easily but also makes this American car the fastest diesel hatch in the country, being faster than the much more expensive Volkswagen Polo GT TDI too. A sub 10 second diesel car that’s affordable and practical too is a dream come true for car enthusiasts in our country.” – Faisal Khan, Editor, MotorBeam.
“I personally own a Swift and had bought it when neither of these competitors in the current generation were around. While the Swift is still fun to drive, I personally feel it has lost its ‘kick in the pants’ feel that the previous generation Swift offered. All the other cars here besides the Swift offer oodles of space which only adds to the practicality. Ford has now changed the game with the Figo. It’s spacious, fun to drive and delivers the segment best performance and safety, making it a no brainer for me in this comparison.” – Javeid Khan, Deputy Editor, MotorBeam.
“The new Ford Figo is a very impressive vehicle offering excellent power and great dynamics. The Swift also has good dynamics but it lacks on the power front and it is too common on our roads now. The Bolt is something which has excellent ride and the fit and finish is excellent too. The Grand i10 tries to offer the best of all worlds but it has lesser performance when compared to rivals. My pick out of these would be the Figo diesel followed by the Grand i10 and then the Bolt.” – Parth Gohil, Road Tester, MotorBeam.
“I love hatchbacks for the convenience they offer. Over the years, hatchbacks have become very well loaded too which makes them an excellent value proposition. Amongst the four cars we tested here, it is the Ford Figo which scores the highest for me because of the safety features (6 airbags) and stonker of a diesel engine. It is an excellent package and has good driving dynamics too. The Swift is also fun to drive but feels too old now. The Grand i10 and Bolt are quite closely matched offering good value for money with the Korean kid leading by a small bit.” – Aman Sancheti, Road Tester, MotorBeam.
Catch All The Latest Videos, Subscribe To