Harley-Davidson gave a good blow to the Indian market by introducing a budget motorcycle that would serve the Indian needs while being under the Rs. 5 lakh bracket. The bike we are talking about is the Harley-Davidson Street 750 which is powered by a liquid-cooled, Revolution X, V-Twin engine. We rode the bike last year and were quite impressed by the performance but disappointed by some bits which made the Street 750 lose some of its appeal. By the end of 2014, a Mumbai based custom bike builder Motomiu, took the Street 750 and transformed it into a beautiful cafe racer. Named as the Motomiu Katanga Uno, where Katanga is the subspecies name for the lions from Africa and Uno meaning “one” in Spanish. This Customised Street 750 is their first creation and it’s created with a belief of the same Katanga (lion) spirit.

Motor Quest: #1 Harley-Davidson showcased the Street series at the 2013 EICMA Motorcycle Show in Milan. The Street series has 500 and 750 models, while the Street 750 happens to be the only motorcycle of the duo to be launched in India for now that hit the streets in early 2014; #2 Motomiu is a subsidiary of the Seven Islands dealership in Mumbai that works on customisation of Harley-Davidson motorcycles, while the Katanga Uno is their first custom work. 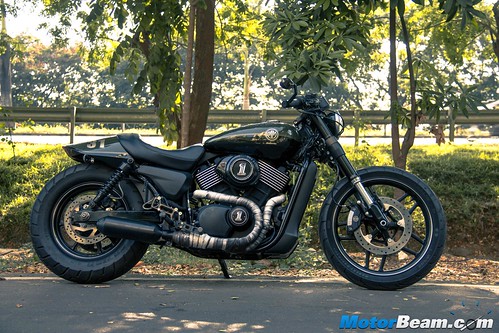 Styling – Everything to say about the Katanga is its styling. Let’s start with the headlamp, it’s a regular round headlamp but instead of a reflector and a halogen bulb, there’s a multi-porjector LED setup. The small black fairing is removed and the cluster is just bolted on. The boring single piece handlebar has been replaced with an aggressively placed clip-on. These clip-ons hold some weird yet new to us switchgears and a pair of 4-way adjustable levers. And just below that, the telescopic suspension has been replaced with USD forks from the Harley-Davidson Night Rod. These beefy USD forks have the number plate holder in the middle while the mudguard has been removed. The 17-inch alloy makes way for a 19-inch 10-spoke wheel which holds 120 section rubber at the front. The bike also gets a dual disc setup at the front adding more to the bling. 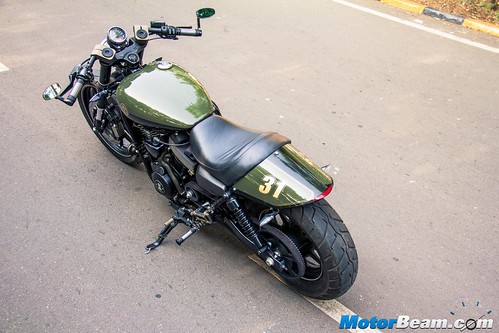 Coming back to the body, the tank remains the same while it gets a dual tone black and green paint job and the Harley badge has been replaced by Motomiu’s logo. The dual yet small seat from the regular Street 750 has been replaced by a single comfortable seat and an aerodynamic cowl which goes towards the tail lamp. The tail lamp and the indicators on the Katanga Uno are LED units which can be found as stock on the KTM RC/Duke 200/390 and Pulsar RS 200. The engine crank-case cover and the air filter box get a unique number one badge, gelling with the bike’s name Katanga Uno. The exhaust pipes from the V-Twin engine get a silver heat wrap and towards the end, there’s a single freeflow canister, custom made by Motomiu themselves. The footpegs on this motorcycle are all-aluminium rearsets, again gaining quite some attention. At the rear, the normal rubber brake lines are replaced by steel braided lines and the average MRF rubber has been replaced by a 170 section higher profile rubber, all the bits making the Katanga Uno look beefy. 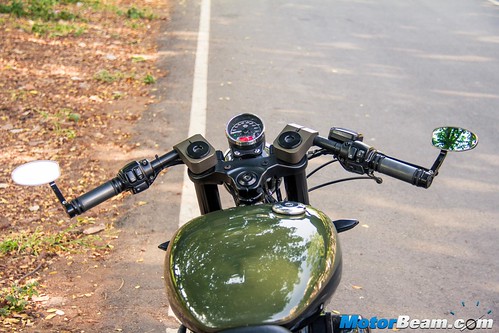 Instrument Cluster and Switchgear – The console remains the same like the one on the regular Harley-Davidson Street 750, while the huge change is the switchgear. Directly taken from its elder siblings, the Katanga Uno gets different switchgear which are seen on higher versions of Harley-Davidson motorcycles. Indicators on the right, high beam flashers on the horn-thumb position, it took some time to get used to these weird positioning of the switches! Well once we got used to the switchgear, the next thing was the key placement. Right side under the tank! Well again some pain to turn the bike on and off again. 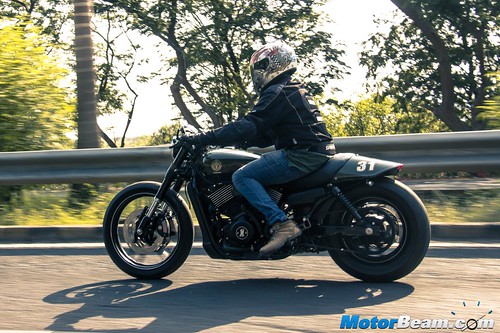 Ergonomics – The Katanga Uno is a cafe racer and cafe racers most of the time have a far and aggressive seating posture. The bike is low, yet very much wide and over to that the handlebars are far from the seat and yet they are lowered. All these bits make the rider leaned onto the tank. The handle is a bit shorter in height but there was no issue during standstill although after riding, the too far clip-ons, wide rearsets and the single seat made riding this bike a bit uncomfortable. The seat happened to be really cushiony and just because of the seat, we didn’t get much tired. 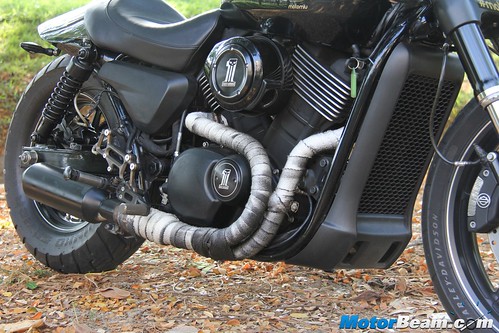 Performance – By now there were some bits that impressed us like the styling while others like the ergos somewhat disappointed us. Now the performance! Such an exclamation because the motorcycle has the same heart within as of the regular Harley-Davidson Street 750. A good revving 749cc engine that puts out 58 BHP of power and 60 Nm of torque is pretty much sufficient for the Katanga Uno as it weighs lighter than the regular Street 750. The lesser weight and better tyres enables the Katanga to get into motion real quick and the bike hits the ton in no time (6.34 seconds as per our VBOX tests). The bike feels like it can go for the second ton but it doesn’t actually happen. 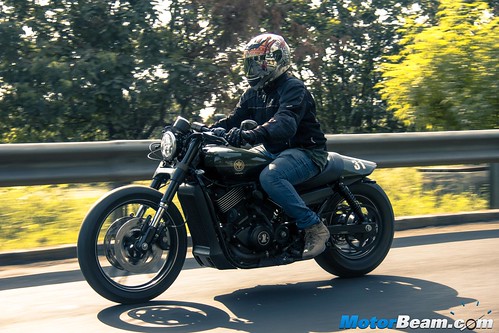 The Motomiu Katanga Uno sits really low to the ground, like literally!

The Katanga Uno gets a freeflow exhaust and the sound is insanely loud, grabbing quite some attention. The NVH levels happened to be harsh but only at higher revs. The rearsets on the bike did give a cafe racer riding position but because of the same, we found gear shifts to be very much notchy. All of the aluminium bits make the Katanga Uno lose 20 kgs from the original Harley-Davidson Street 750 and the bike does feel a bit lighter. The performance of the engine happened to be the best part of the motorcycle but due to the wider tyres, it lost out in both acceleration numbers and top speed. 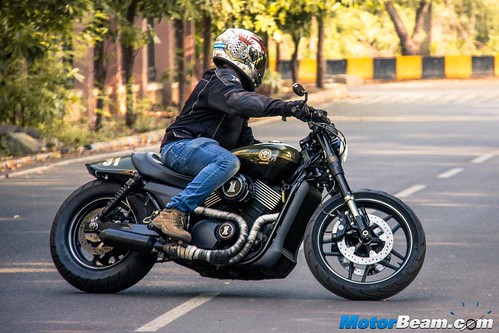 Riding Dynamics – Cafe racer ergos always generate a question whether the bike would suit the rider or not. Even after being a crazy motorcycle enthusiast (I rode another cafe racer, the Continental GT to Goa recently), it took me a while to get used to the bike. Riding it at first was just a pain which was later covered up by the superb performing engine and decent ride quality which is a bit stiffer than the stock set-up. The rearsets aim is to enable the bike to go down a curve very well but it just didn’t happen. On the straights, the Katanga Uno performed tremendously well but as some turns came on or we got into corners, the footpegs would scrape the ground! Even before leaning to an angle the footpegs would create an issue always. The bike now had an underseat brake oil chamber for the rear, so with the theory going, the pressure of the oil would be better and we could get better braking performance. But NO!, the theory actually didn’t work as good as we expected. 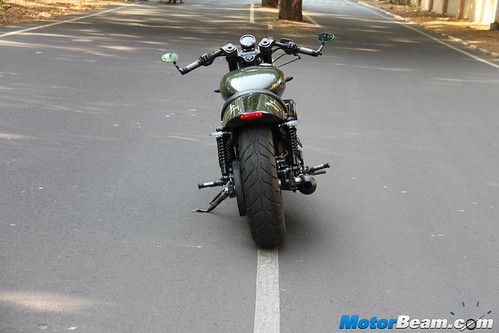 The twin disc at the front didn’t give a drastic change in the braking performance. The regular Street 750 lost out a lot on the braking front as it lacks the feel and didn’t stop with confidence but the mods on the Katanga Uno meant much better braking in theory, yet the feel was still missing. The Katanga Uno would stop much more quicker but the amount of bite needed was not clearly visible. Thanks to better tyres, the braking performance was on a manageable ratio. Overall the Katanga Uno rode well, but with the expectations of the hardware on-board, the bike didn’t live upto the mark. 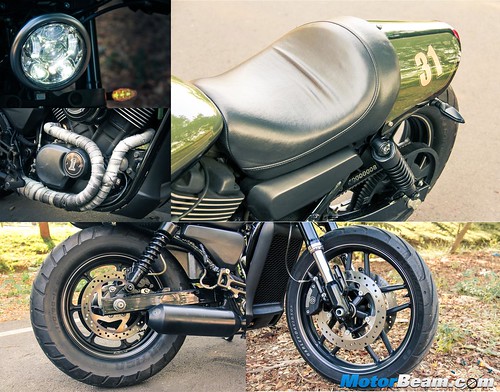 Great hardware is put up on the Katanga Uno, giving a premium feel

Verdict – We know that riding a Harley-Davidson is not about going fast or cornering hard but with the mods done by Motomiu and the superb performing 750cc powerplant, the Katanga Uno has that cafe racer feel which gives some adrenaline rush. Riding a cafe racer at slower than cruising speeds, just for the attention and style with the uniqueness of the motorcycle, that’s where this bike excels. With that great hardware on-board (some bits are locally made) and a bit of a difficulty in riding the motorcycle (requires a lot of attention to turn), the price quote of Rs. 9 lakhs (on-road Mumbai) is the one to be thought about, as it’s just double the cost of a regular Harley-Davidson Street 750. The styling and design of the Katanga Uno are really unique and the efforts put in by the Motomiu team are very much appreciable. Being their first customised motorcycle, Motomiu has gained a great repute but only from a very selected audience who would pay this kind of money for majorly aesthetic appeal.

The Motomiu Katanga Uno doesn’t ride or handle as well as the hardware improvements suggest and is thus a bike for Harley-Davidson enthusiasts only, who are crazy about how the motorcycle looks and the attention it seeks. 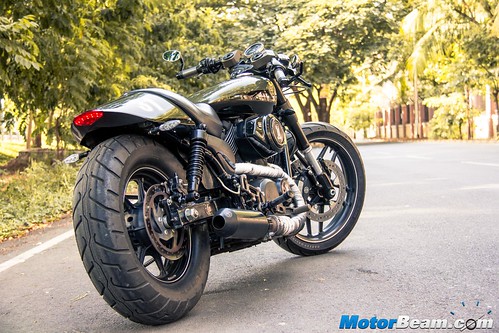 * Dynamics, suited only for straight line fun, bad in corners and traffic, lacks brake feel too
* Lacks value for money quotient, much premium Harley-Davidson motorcycles are available at similar cost

“Paying the cost of the motorcycle just for mods seems quite unreasonable to me. The Street 750 has always had the performance, the Katanga Uno brings nothing new to the table and the fact that the brakes still aren’t sharp enough is a big disappointment. For posing, this is definitely a bike which grabs a lot of eyeballs. But if you want to spend Rs. 9 lakhs on a Harley, you are better off with the Iron 883.” – Faisal Khan, Editor, MotorBeam.
“I had huge expectations from the Motomiu Katanga Uno but as soon as I got onto the bike, I realised this isn’t about the go, it’s more about the show. The stock Street 750 already grabs a lot of attention, questioning the need for enhancing its visuals. Some bits are definitely nice but not all that’s on the bike helps. This will appeal to Harley fanatics but isn’t the machine for most of us young riders.” – Dhanil Vira, Road Tester, Two-Wheels, MotorBeam.

Is The Street 500 A True-Blue Harley?