Everyone loves competition and if the competition is neck to neck, the fight happens to be brutal. To demonstrate, market leadership in the 200cc segment has been owned by Bajaj for a few years now and it has been unchallenged as the Pulsar range of motorcycles kept the bar high until TVS launched its new flagship model, the Apache with a 200cc mill ready to take on the Pulsar’s reign. Yet again with a really long name, the TVS Apache RTR 200 4V is here to compete with the Bajaj Pulsar AS 200. Which of these two should be the pick?

Motor Quest: Bajaj introduced the new range of Pulsars with the 200cc, triple-spark plug, liquid-cooled engine in 2012 which was called the Pulsar 200 NS. Bajaj then added two more motorcycles, the AS 200 and RS 200 in the year 2015. Now in the year 2016, TVS has come up with some competition, introducing a new flagship model of its Apache line-up, having a 200cc engine and naming it the TVS Apache RTR 200 4V. 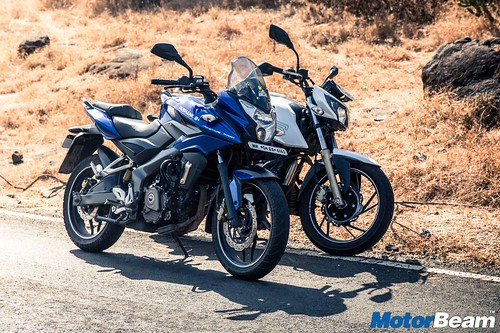 Styling – First glance at the bikes and they are a much grown up version of their predecessors. The Pulsar AS 200 seems slightly old while the Apache 200 looks really fresh. The bulkiness of the Pulsar AS 200 comes from the front semi-fairing which seems to be borrowed from the Pulsar 220. And definitely worked upon with a modern approach. The Apache 200 however has the structure from the Apache 180 while everything has an update in design and styling. Comparing both the bikes, the Apache looks sharper while the Pulsar looks smooth and healthy. 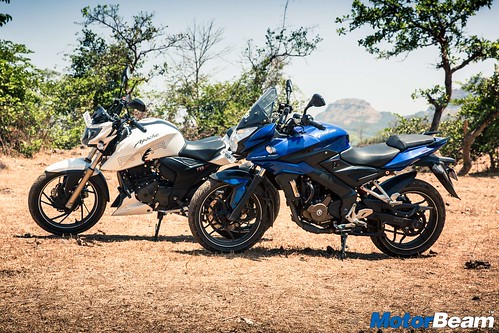 The Apache 200 seems to have been on steroids as every body panel is edgy and has a solid build to it. The Pulsar’s semi-fairing makes it look bold while the Apache compensates with a belly cowl and an angry headlamp with integrated DRLs. Both the motorcycles have 10-spoke alloy wheels while it’s the TVS which looks more attractive. Both again feature split seats but at the end, the batman shaped grab-rail on the Apache grabs the attention. And not to forget, the double barrel exhaust gives the Apache 200 more appeal over the concealed underbelly exhaust on the Pulsar AS 200. 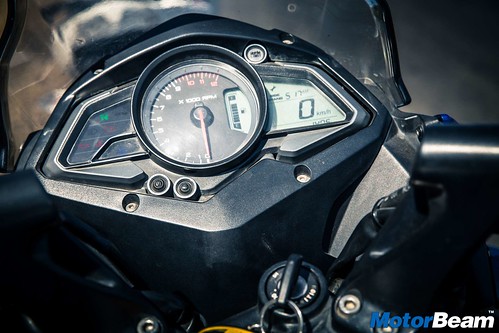 Instrument Cluster and Switchgear – The instrument cluster is something that a rider looks at every time when on the saddle. For the Pulsar, there’s no drastic change as the console is just picked up from the Pulsar 200 NS and put into the semi-fairing. The console stays an analog-digital unit. While the same on the Apache is completely new. It is a complete digital unit with loads of features. The white back-light presents an upmarket feel to the instrument cluster. The console on the Apache is much more advanced and flashes a text ‘Wear your gear’ every time the bike is switched on. 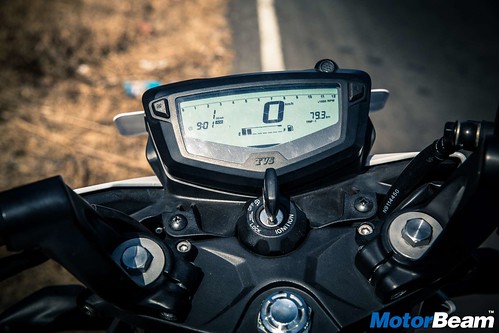 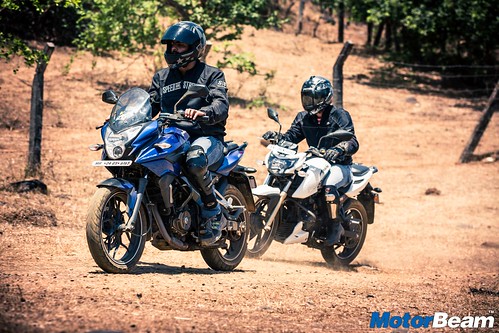 Ergonomics – The ergonomics of the Apache 200 is based completely on a street-fighter. While the Pulsar AS 200 has touring oriented ergonomics. Though both the bikes feature clip-on handles, the Pulsar is a bit more relaxed than the Apache. The clip-ons are higher, also the footpegs are more comfortable and less cramped. The Apache has similar clip-ons but the raised footpegs give a slightly cramped and committed riding posture in comparison to the Pulsar AS 200. The semi-fairing helps cut through wind-blast on the Pulsar AS 200 while the naked design of the Apache 200 provides a good view to the rider while it is more prone to wind-blast. 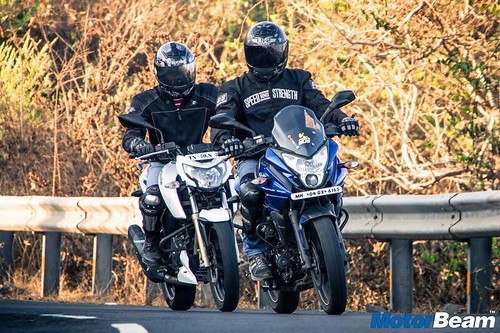 The ergonomics for both these motorcycles is quite similar

The 800 mm seat height of the Apache 200 is more comfortable for shorter riders than the 810 mm seat height of the Pulsar AS 200. The Apache seems to have cramped posture for the legs but shorter riders find it easier and more manageable. The Pulsar stays compliant to all kind of riders but it’s the hard seat that leads to some discomfort. The pillion seat on the other hand is wide and more comfortable on the Pulsar. The Apache 200 has a better ground clearance and it is also 5 kgs lighter than the Pulsar AS 200. 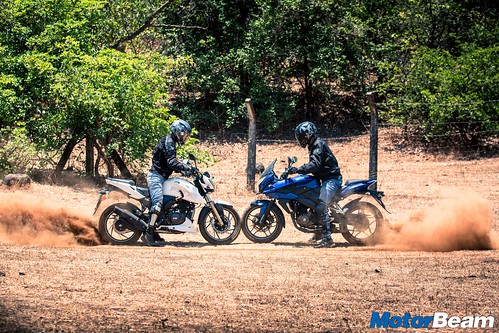 The machines have ample performance to have fun with

Performance – Considering the performance, the Pulsar AS 200 beats the Apache 200 hands down on paper as well as on the road. But both the bikes have adequate power if considered individually. As both the motorcycles produce more than 20 BHP of power and a slight over 18 Nm of torque while weighing close to 150 kgs, the power to weight ratio of both the machines feels adequate. It is the nature of the engine which brings the variation. While the Apache has a strong mid-range and a peppy low-end, the Pulsar has all the punch in its top-end, making it much appropriate for the highway. 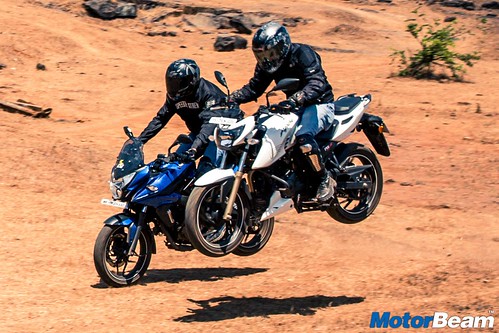 The Apache 200 is comparatively lighter than the Pulsar AS 200 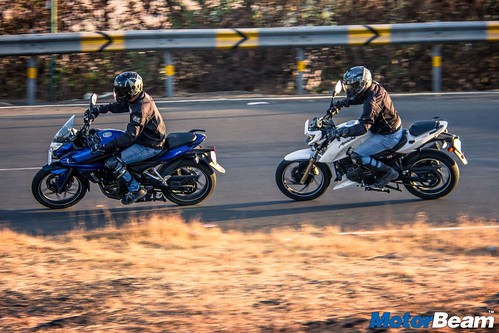 The Pulsar AS 200 has better high speed stability 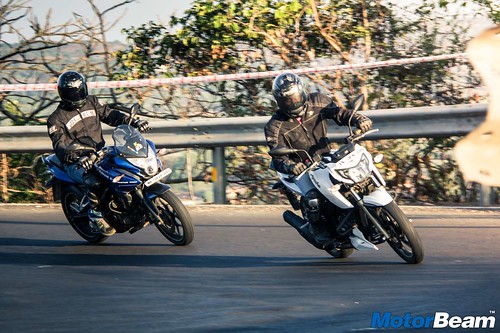 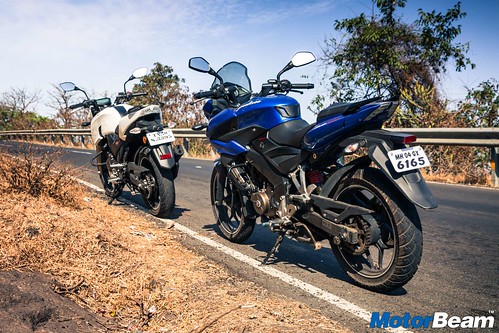 From the similar genre, yet distinctive from each other

Verdict – The Bajaj Pulsar AS 200 is more value for money and comes with better hardware but it’s the Apache 200 that gets more safety, better tyres and happens to be more practical than the Bajaj motorcycle. The Pulsar is a proper performer but the Apache offers more refinement and suitable dynamics giving it an edge over the AS 200. The Pulsar is a good machine, more suited for people looking out just for outright performance with touring capabilities but it’s the Apache 200 that beats the Pulsar as it’s a better product here. The TVS Apache 200 4V is definitely our pick.

“The Pulsar has had a home run because no one has dared to enter the 200cc segment. Now TVS has finally declared war as it seems to have had enough of Hunto. The Apache 200 was much awaited, had huge promise on it and the on paper figures disappointed us big time but we did not write it off till we rode it. The RTR bike is impressive in certain areas and only falls short in outright performance where the Pulsar AS 200 excels. That aside, the Apache feels the better motorcycle to ride although between the two, I would choose the Adventure Sport for it is suited to tall riders.” – Faisal Khan, Editor, MotorBeam.
“Both the Pulsar AS 200 and Apache 200 are amazing but it’s the TVS that wins the heart here. Though it loses out on hardware, it has some unique features like the console and Pirelli tyres that make it up to the missing bits. After the improvement in refinement on the Apache 200, though the engine produces less power, the smoothness is mind blowing. And the double-barrel exhaust is just amazing. The AS 200 is however faster and more suitable for touring but the tyres and engine refinement isn’t up to the mark. Choice between both the motorcycles depends on what it will be used for. But no doubt, the Apache is a better bet here.” – Dhanil Vira, Road Tester, MotorBeam.
“Spec wise, the Pulsar AS 200 is a clear winner here. However, the way it behaves on the road is not as impressive as it claims to be. The Apache 200 is a much superior product despite the hardware it offers. Pulsars have always had impressive specs on paper and many love the way they perform, however the Apache 200 feels much better to ride. It beats the Pulsar when it comes to ride quality and handling which is what is important out on the streets. But when it comes to the highways, The Pulsar is a much more suited choice because of the hardware it offers.” – Adwait Babras, Road Tester, MotorBeam. 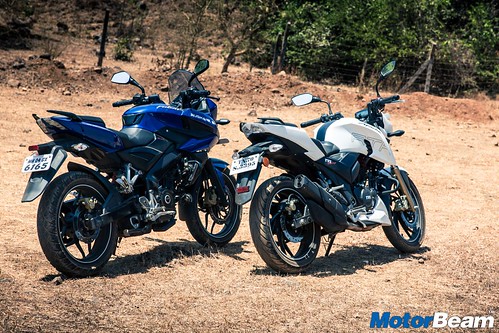 Performance vs Practicality, choice is difficult but impeccable