If you have everything under control, you are not moving fast enough!

If you guys have noticed, the TVS Racing logo is found only on the TVS NTorq and the complete Apache line-up. Just like every other manufacturer, TVS likes to keep things exciting and TVS Racing is a part of it which brings in the adrenaline rush. 2 years back I was there in MMRT to attend a single race event against all the media racers and it was good fun. Last year again, I rode on the MMRT thanks to the launch of the TVS Apache RR 310. While TVS had a Young Media Racer Program last year too. 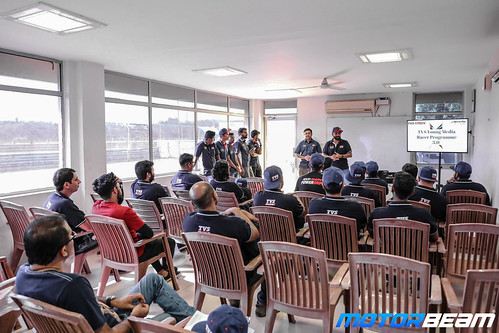 Being the third year of the TVS Young Media Racer Programme, I got a chance to be a part of it. This programme isn’t just about a single session. It’s a complete season where I got the training and now while I have applied for the FMSCI License, I will be participating against other media racers the whole year at different tracks. While I arrived at the track my eyes were glued onto the race-spec Apache RR 310. Along the line-up were the race-spec Apache RTR 200 Race Edition motorcycles which we were going to ride. To be completely honest, just by the looks of it, these motorcycles did look mean and fast! 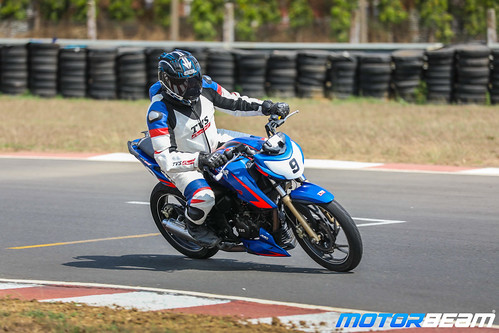 Taking it slow in the first few laps, understanding the lines

Well as the day started, things got interesting and a little different. We had to attend classroom sessions with Harry Sylvester and then once we complete each session, we had to head out with Jagan or KY Ahamad, our coaches, on to the track. The first session was about the lines, basic knowledge is understanding the lines of the track. As there were markers all over the track which showed entry, apex and exit points of every corner. Our main lesson was to get the lines right by following one of the coaches in a single gear without applying the brakes. This is where I understood I was taking the wrong lines earlier. 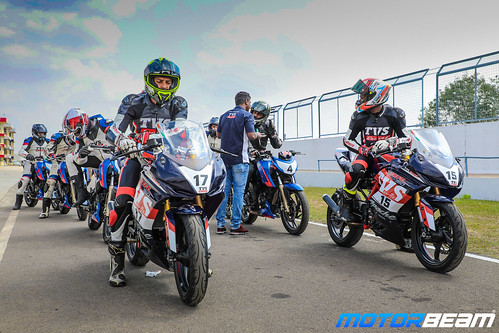 Lined up behind the coaches so we understand the markers right

We headed back to the classroom session before which I made sure I got some feedback from the coaches. We were split into batches which made things easy for the team while there was less crowd on the track as well as in the classrooms. Some QnA sessions happened and we moved onto the next lesson which was body positioning. Here we had to get the body positioning right according to the corners and even the straights. Completely ducked on the straights while the body stays parallel and slightly upright to the bike but shifted onto a particular angle for the corner. We had to use the 3rd and the 4th gear this time with a little bit of braking. 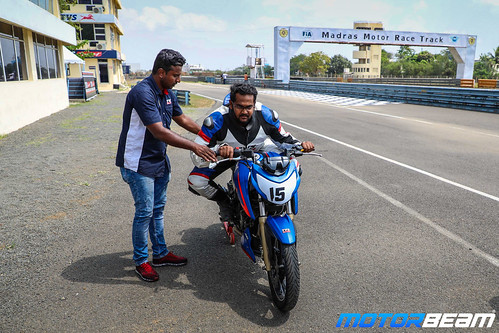 The next session was about the launch practise and braking. We had our classroom session on how to launch, how to shift gears for maximum acceleration and how to complete braking. KY Ahamad showed us how to launch and gear change and batch-wise each of us had got two chances to practise. All of this happened at the front straight and at the end of the front straight was Jagan who would judge our braking as we come to a complete halt. The first round I had a good launch but terrible gear shifts as I was trying to do it clutch-less and I was not downshifting early enough at the braking. Both the coaches gave me the pointers and in the next try, I almost nailed it. 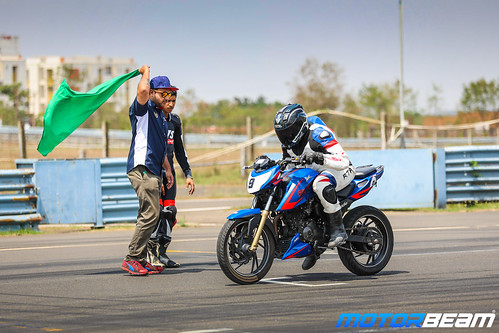 Switching body positions, the only thing to make sure is not to unsettle the bike while entering the corner

It was just March and the heat was killing all of us already. After the lunch break, everyone got a free lap session of 10 mins. This time we could gun the bike to its limit while put in to play all the things we had learnt from the day. 10 mins comprise of almost 4 laps at MMRT and while I was followed by Jagan in the 2nd lap, I got conscious. I was about to crash in the last corner as I lost my front and went wide on the gravel. For half a lap he then showed me the lines again and told me just one thing in hand gestures obviously, “look where you want to go”. 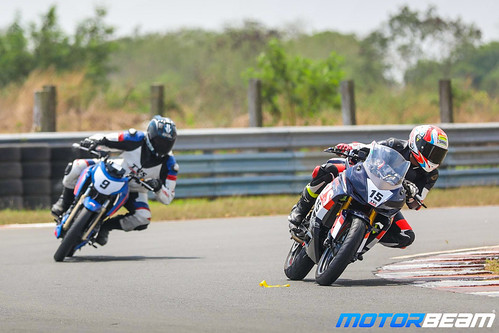 Following the lines of Jagan Kumar, the yellow tape were the markers for us

The next 2 laps were just brilliant, I understood the whole track properly. Got almost all the lines right, looked where I had to go and I felt comparatively quicker exiting the corners as well. There were very few moments where I felt I wasn’t following the line but then I had better corner speeds. But then I am not just as fit for racing and that got to me as I got very tired. Next up was another classroom session and then we had to do our timed laps. This session happened in the pits itself as the coaches explained us everything. While the TVS corporate communication team made sure we all were hydrated enough and ready to give out our best one last time for that day. 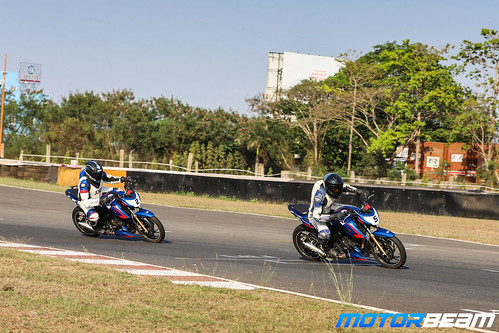 I got very close to one more rider during the timed lap!

Transponders were put on our motorcycles and 6 riders at once were sent out with a gap of 10 seconds. I timed the fastest lap of 2:31:63 and I qualified 5th overall. I could have gone better in the last lap but I got very close to one more rider up front and lost 2 seconds just battling it around. But in the end, I was very happy with the timings as I never knew I could get this close even with the training as I still did some mistakes. Out of all the riders, 15 have been selected to attend the complete season. While the rest of the guys would be invited as special cards. In all the classroom sessions from the beginning to the end, we were taught about the flags, the marshal posts, types of corners, everything! What is an apex and why the markers are being used to get a better racing line improved my time! 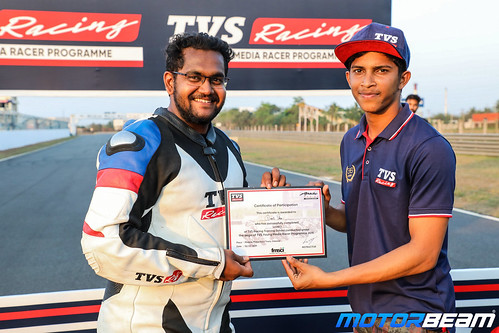 While I complete this article, two of my friend’s are already attending one more TVS Racing Training school at MMRT at a very affordable cost. My event was specific for the media while more such events have been kept open for all the riders and especially for TVS Apache owners. Those who are looking for one, there is an event on 20th April at MMRT and it is open to everyone but has limited seats. TVS getting into racing and giving out such opportunities is what everyone is looking up to. While I had my eye on the RR 310 I understood I need to get myself perfect on the RTR 200 and eventually will ride the top-of-the-line Apache, a race-spec one on the track. Until then I need to get ready for the next race which is going to happen at Kari Motor Speedway, the most technical race track we have in India. 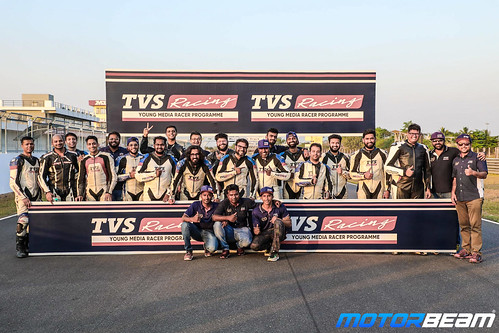 One with all the participants, coaches and the TVS Racing Team

TVS Maxi Scooter Based On Entorq 210 Concept Under Development