The new 3-Series makes the competition go back to the drawing board.

Even though the Indian automobile industry is in the midst of a slowdown, the luxury car segment is growing at a good pace. BMW is the current leader in the luxury car space and the 3-Series is one of their best products. The 3-Series is also one of the most popular compact executive cars to have rolled out from Germany. Launched way back in 1975, the BMW 3-Series is now in its sixth generation. Not only is the 3-Series an important car in the segment, the vehicle is extremely important for BMW too, accounting for more than 30% of total sales. The latest generation BMW 3-Series has improved in all directions and is called the Ultimat3 but is it the best 3-Series till date? We drive the Bavarian beauty to see why it is the new benchmark in its segment. 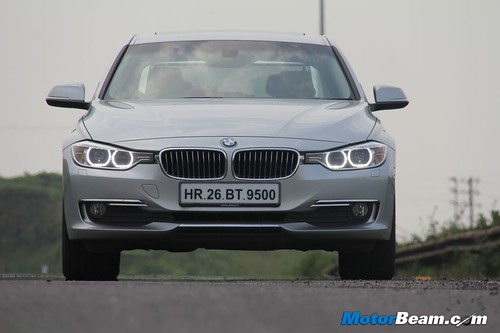 Exteriors – The styling of the new BMW 3-Series is more evolutionary than revolutionary. There is no mistaking the car for anything other than a BMW 3-Series, with the overall body style being quite similar to the E90. The F30 3-Series draws heavy inspiration from its elder siblings, the F10 5-Series and the F01 7-Series. The front is now more expressive with the large headlamps and slightly forward slanting kidney grille merging into each other. This makes the BMW 3-Series look much wider than it actually is. The headlights look striking with LED lights positioned like eyebrows having the characteristic twin corona rings within. 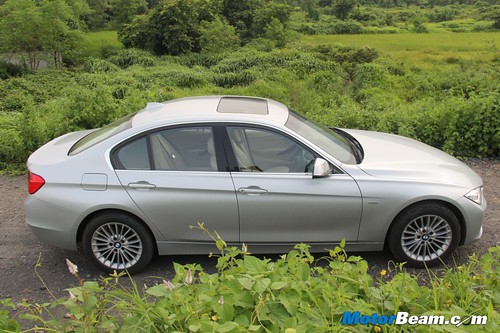 The luxury line gets oodles of chrome, including some on the rear view mirrors, around the doors and above the fog lamps. The character lines are extremely dynamic and the sweeping lines are clearly visible when viewed from the side. At the rear, the BMW 3-Series sports the character L-shaped tail lights with reflectors positioned on the bumper. A chrome strip runs on the bumper too, right above the exhaust. Overall the smooth flowing surfaces, precise lines and defined edges give the new BMW 3-Series tremendous road presence. 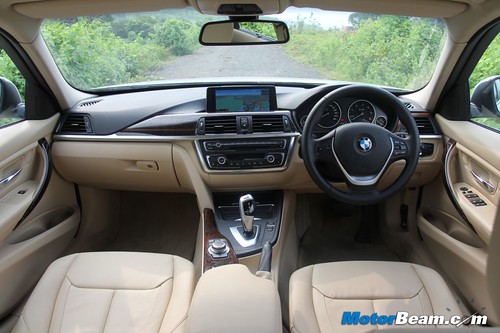 Interiors – The evolutionary theme continues on the inside too. Although the dashboard has been heavily revised, it does have the typical feel and layout seen in BMW cars. The new 3-Series’ cabin looks quite a bit like the 5-Series, which we all know has been inspired from the 7-Series. The 3-Series gets dual tone beige interiors (on the luxury line) with wood inserts on the dashboard, centre console and door handles. BMW has very carefully used silver inserts which have been very well executed to give the 3-Series a very premium cabin. The quality of the interiors is top notch and everything is very well put together. 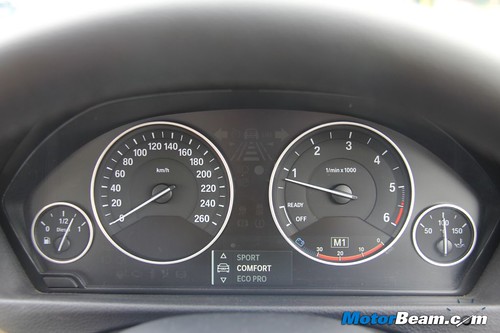 The instrument cluster is now wider, with four pods having silver surrounds instead of two pods seen on the earlier 3-Series. The dials are easy to read and the cluster has the multi-information display which carries an array of data. The tachometer has off-ready on it (right below 0 RPM), which is for the start-stop system. The steering wheel is small in size but extremely good to hold and use. It has an array of buttons to use the various functions like audio system, phone and cruise control. 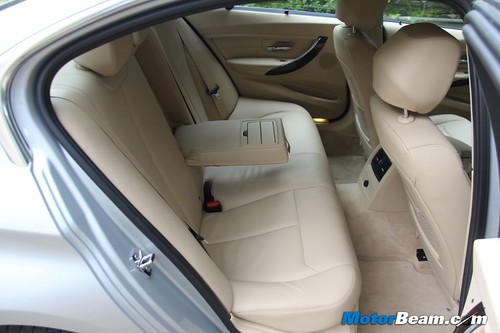 The infotainment system uses a widescreen display and has many functions including navigation, maps, BMW apps, phone, iDrive features, etc. The screen also doubles up as the reverse parking display and also gives your projected movement as you turn the steering wheel. The center console is angled towards the driver by 7-degrees, to make the cockpit more driver centric. The buttons on the center console are slightly small, while the gear lever is the same joystick we have enjoyed on the 5-Series (the old 3-Series did not have this). Visibility is good and the front seats are electrically adjustable. The front doors have generous bottle pockets but the same can’t be said about the rear doors. 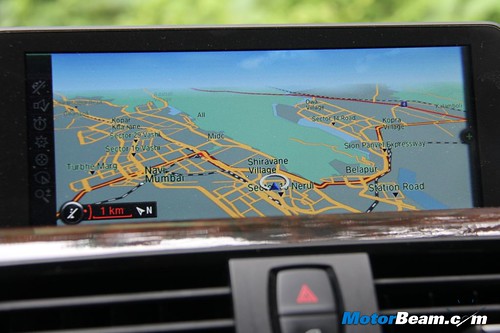 The new BMW 3-Series is now 93 mm longer, with the wheelbase being 50 mm more than before. This has resulted in the cabin room increasing by quite a bit. The new 3-Series is a proper four-seater, with good amount of legroom and headroom for all passengers. The old 3-Series was known to be cramped at the rear but the new one addresses this issue. The seats are very comfortable with thigh support and back support being excellent. Like all rear-wheel drive cars, the transmission hump protrudes through the cabin resulting in the rear bench being best for two to occupy. Boot space is a good 480-liters, a 20-litre increase over the old generation model. 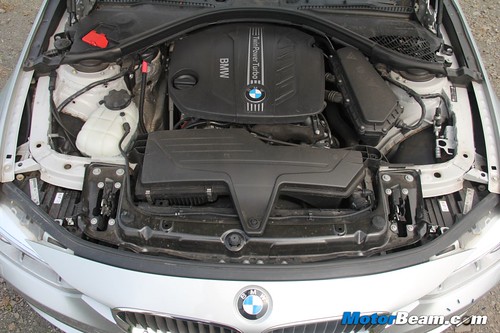 Performance – BMW is offering the diesel 3-Series with the same 2000 cc, diesel engine which has a rated power output of 184 BHP and 380 Nm. Badged as BMW TwinPower Turbo, this engine uses a twin-scroll turbocharger to boost turbine efficiency. While this engine is not the best in term of NVH levels, performance is stonking. The 320d pulls strongly to 100 km/hr, taking just 7.9 seconds to cross the ton. Mid range is simply fantastic and there is more than enough thrust available for our roads. Even though its a diesel, this motor loves to be revved and pulls very strongly at all speeds. BMW claims a top speed of 235 km/hr.

The BMW 320d’s performance is quite petrol like. There is no sudden surge and power delivery is linear. Drivability is very good too and this diesel engine is at home whether in the city or out on the highways. Mated to the 320d is a 8-speed ZF gearbox which has seamless shifts and is quick to react to throttle inputs, shifting cogs when needed. There are no paddle shifters on the 320d, but one can manually shift using the tiptronic function on the gear lever. At 100 km/h the tachometer reads 1500 RPM in 8th gear and 1900 RPM in 7th gear. The new 3-Series has several EfficientDynamics measures like automatic start-stop and intelligent Eco Pro mode, which makes it a very frugal car. One can expect a mileage of 10 km/l in the city. 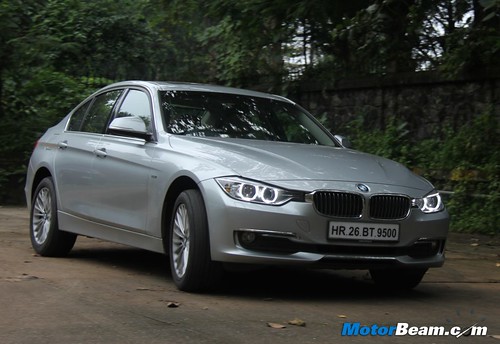 Driving Dynamics – The new BMW 3-Series is much bigger car than before and the track is wider too, but that hasn’t added to the weight of the car. Instead, the new 3-Series is 40 kgs lighter, while at the same time 10% more rigid, thanks to use of aluminium in its construction. The 50:50 weight distribution has been maintained like the old model. The result is the new 3-Series handles splendidly like the old model, with good agility and precision. However the new electric steering is not as quick or sharp to respond as the E90 but is quite accurate. 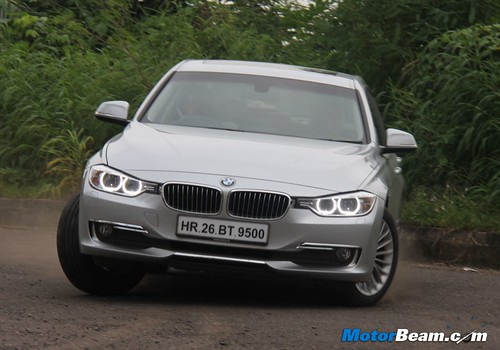 There are three driving modes on the F30 BMW 3-Series – Eco Pro (for efficient driving, it also displays the extra kms you have driven on the same amount of fuel), Comfort (gearshifts are smooth, steering is light) and Sport (quicker gearshifts, heavier steering and faster throttle response). The Sport mode gives the new 3-Series extreme performance and handling but the car becomes a big jerky and there are no adjustable dampers for the Indian model. There is Sport+ mode too, which disables DSC but enables DTC. In this mode, traction is restricted and the gearbox won’t up-shift at all till you manually do so. 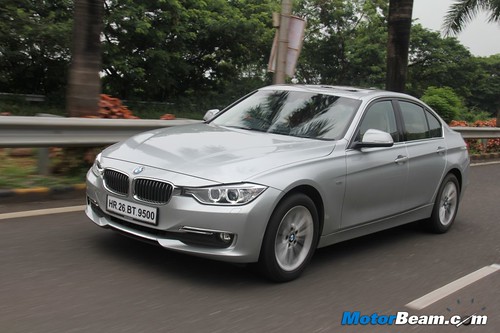 The old BMW 3-Series was known for its stiff ride quality but the new one has vastly improved in this regard. The suspension is tuned for Indian road conditions and is softly sprung. Ride quality is good and ride comfort is impressive. However there is some bit of firmness leading to the suspension becoming a bit noisy. Grip levels are excellent and so is the high speed stability but the rear gets a bit unsettled on hard cornering. The rear suspension is slightly more softer than we would like but overall the dynamics of the new BMW 3-Series are spot on and offer a splendid blend of ride and handling. Braking performance is splendid as you would expect form any BMW, with the 3-Series shedding speed with urgency and confidence. 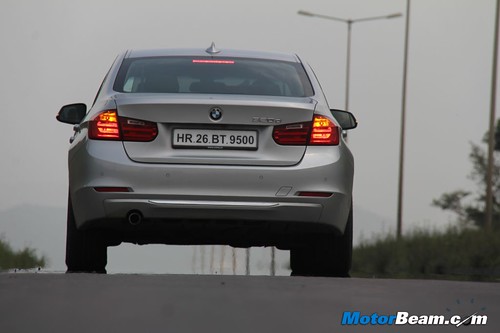 Verdict – The sixth generation BMW 3-Series is indeed a step in the right direction. The F30 model address the major gripes of the E90 model, with increased interior room, vastly improved ride quality and better performance. BMW might have slightly tamed the 3-Series, but that is in-line with what most prospective buyers would want from their compact luxury car. The new 3-Series is not only fun to drive (like the old generations), it is practical too, making it the most attractive all-round package in its segment.

The new BMW 3-Series pleases with its practical yet fun approach. Its fast, frugal, spacious and comfortable, making it extremely difficult to beat. 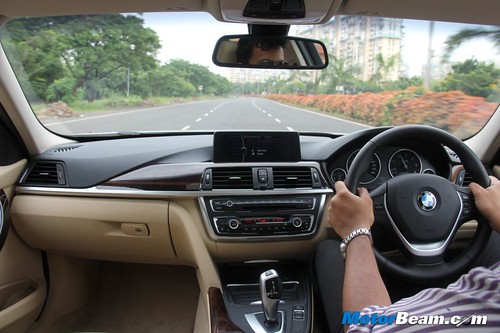 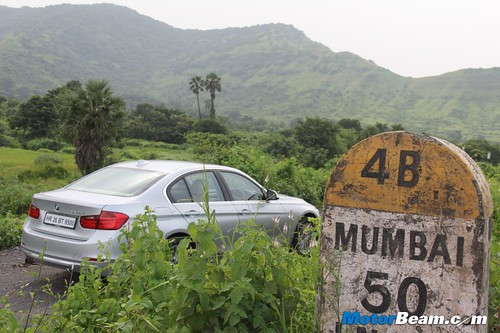