BMW is known for developing driver’s cars, offering splendid handling and sheer performance. While the 5-Series is a luxury sedan, offered with the best of equipment and comfort, it does have the BMW genes in it. But what if the folks at M-Technik take a 5-Series and convert it into a complete monster? The result is the BMW M5, which is one of the fastest 4-door saloons in the world. The first M5 was born way back in 1985 and was based on the E28 5-Series. Today the BMW M5 is in its fifth generation with the F10M model boasting of almost double the horse power over the original. BMW’s M-division tunes and tests all the M models on BMW’s private facility at the Nürburgring. How does this beast perform? We take this high performance sports sedan for a spin to find out. 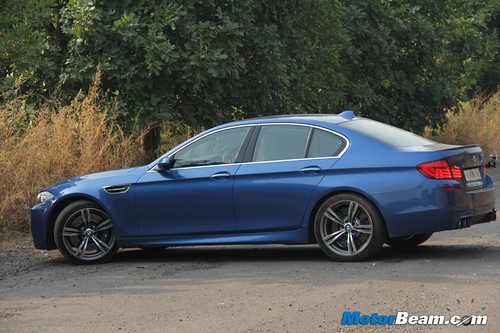 Exteriors – Since the M5 is based on the 5-Series, the styling is very similar too. The changes to the exteriors are few. At the front, one will immediately notice the aggressive bumper sans fog lights, which have been removed to accommodate the air intakes. The slats on the kidney grille are now finished in black instead of chrome. On the side, the BMW M5 gets air intakes on either side, which are surrounded by chrome and also incorporate the turn signals. 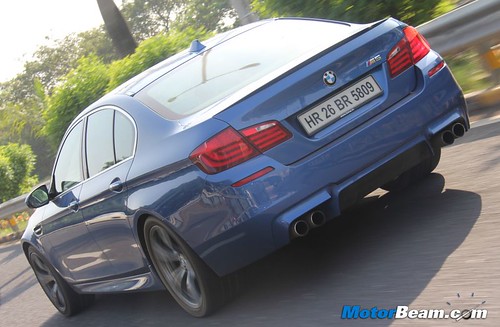 The most eye catchy part of the BMW M5 are the massive 20-inch forged wheels. These 5-slim double spoke wheels flaunt the massive brakes and blue callipers. There are side skirts too, which transform the look of the car to a great extent. At the rear, the BMW M5 gets a boot integrated rear spoiler, M5 badging, new rear bumper with diffuser and quad exhaust pipes. Overall the styling of the BMW M5 is very subtle and doesn’t give onlookers any hint of what is under the hood. 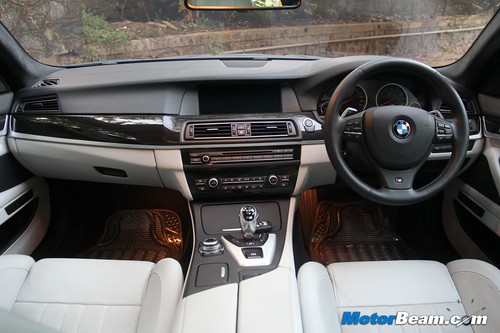 Interiors – Everything inside the BMW M5 is similar to the regular 5-Series. However there are a few M specific changes. The steering wheel gets the M badge on it while the colors used inside are slightly different too. The instrument cluster too gets the M badge and the speedometer is calibrated all the way up to 330 km/hr, instead of the 260 km/hr in the regular 5-Series. A 10.2-inch screen is offered in the M5, instead of the 7-inch one found on the regular car. 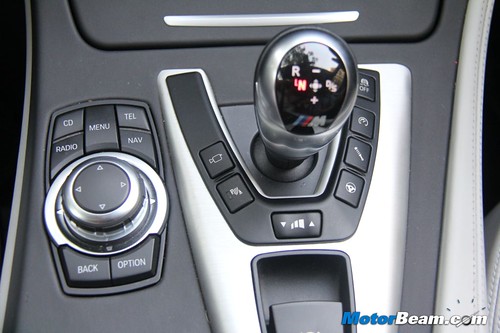 The other changes to on the inside are on the center console. The M5 gets a M gear lever along with various M buttons placed around it. These M buttons help you to choose Comfort, Sport and Sport Plus mode for the steering, suspension and engine. Every time the car is restarted, the BMW M5 shifts all settings to comfort mode. One can also toggle between three speeds for gearshifts. One can save their preferred configuration via the steering wheel and toggle between them by just pressing a button. Side cameras are placed around each front wheel, a feature which is lifted from the 7-Series. 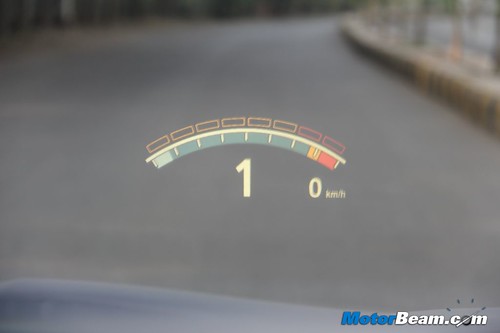 The BMW M5 also features a heads-up display, which is very different from the one found on the 5-Series. The M5’s heads-up display shows vehicle speed, gear and tachometer. This heads-up display has a full spectrum of colors. Apart from these changes, the M5’s cabin is identical to the 5-Series. Built quality is top notch and the M5 is an extremely comfortable vehicle for 4 occupants. The seats are splendid, having excellent side bolstering, which helps you to stay comfortable when you hit the high G-forces this car is capable of generating. A big boot of 520-litres makes the M5 a very practical car for a weekend getaway. 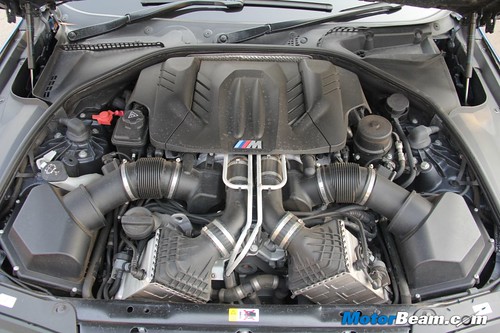 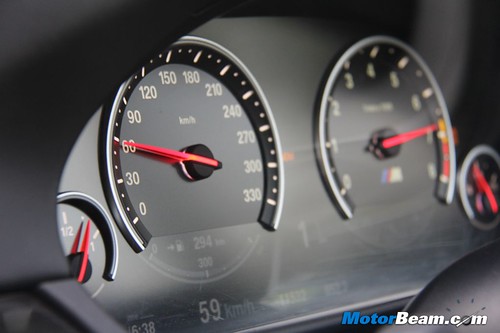 The most surprising part about the new BMW M5 is its daily usability. One can drive around congested city conditions like a wolf in sheeps clothing. Thanks to the high amount of torque being produced lower down the revv range, the new M5 feels at home in traffic. When driven sedately, the M5 is silent, without much of noise from those quad exhaust pipes. But on full steam, the M5 growls loud and clear. Once you are out in the open, simply shift the M settings into Sports Plus mode and smack the throttle, the M5 turns into an entirely different machine. 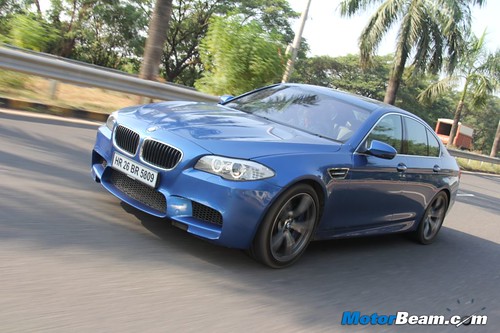 At full steam, the BMW M5 feels and sounds like an aircraft ready to take off, it feels brutal and is massively quick.

Performance is simply mind-boggling and the thrust from the V8 motor is addictive. In fact so strong is the performance, that you need to mentally prepare yourself every time you stand on the accelerator pedal. This engine loves to be revved and redlines at 7200 RPM. The turbo kicks in so strong that even after lifting off the accelerator pedal, the M5 is still going strong. BMW claims the M5 will hit 100 km/hr in just 4.4 seconds, while 200 km/hr takes just 13 seconds. Top speed is limited to 250 km/hr but the M Drivers package will remove the limiter, boosting the top speed to 305 km/hr. It is amazing to witness how the M5 is a sedate sedan at one time and a complete super car thrasher the other. 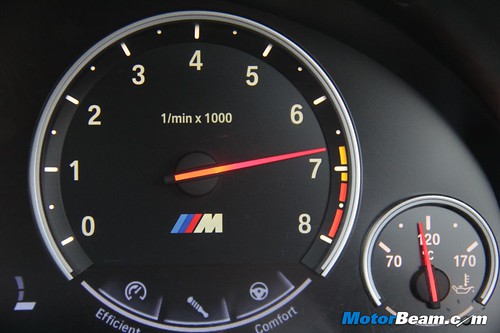 Mated to this direct injection motor is a 7-speed dual clutch gearbox, which shifts like lightning. In manual mode, the transmission will simply not up-shift till you do so yourself. Steering mounted paddle shifts work well and shifts are butter smooth. With so much performance on tap, the BMW M5 does sip fuel and naturally so. Our test vehicle was returning 4 km/l, which is slightly better than most cars having similar power output. 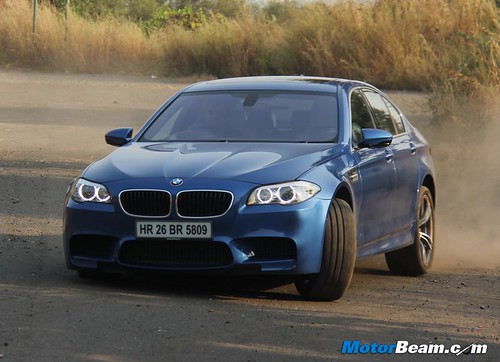 Driving Dynamics – One would expect the M5 to have a bone jarring ride courtesy the 265/35/20 tyres at the front and 295/30/20 tyres at the rear but BMW engineers have pulled out a surprise. The M5 rides well, absorbing bumps with ease. It doesn’t feel stiff nor does it get unsettled by bad roads. One can choose comfort mode for the suspension thanks to the electronically controlled dampers. Braking performance is splendid and the massive 400 mm discs at the front and 396 mm discs at the rear, along with various systems (ABS, Dynamic Brake Control, Brake Assistant, Cornering Brake Control, Brake Drying function, Fading Compensation) ensure the M5 comes to a halt quicker than you can imagine. The M5 doesn’t run on run flat tyres and there is no spare wheel either. 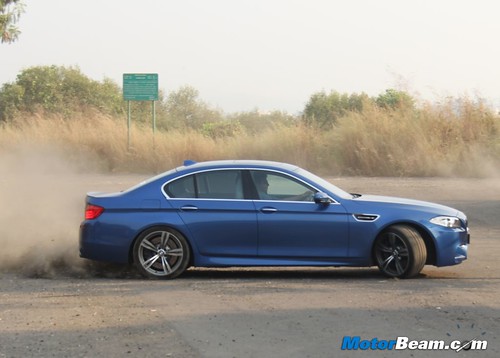 Even with a weight of close to 1.9 tonnes, the BMW M5’s handling remains true to its name. You can push the M5 through any corner at any speed and it maintains splendid balance. The traction control system works very well to put all that power down sanely. It cuts down power to stabilize the vehicle when there is loss of traction. The Active M Differential channels power to the right rear wheel and left rear wheel to maintain traction. The electronic limited-slip differential controls wheelspin while the rear diffuser helps in better aerodynamics and keeps the car glued to the road at high speeds. The BMW M5’s hydraulic steering (regular 5-Series has an electric steering) has terrific feedback. It is well weighed at all speeds and is extremely communicative. In comfort mode, it is light and easy to maneuver in low speed conditions. 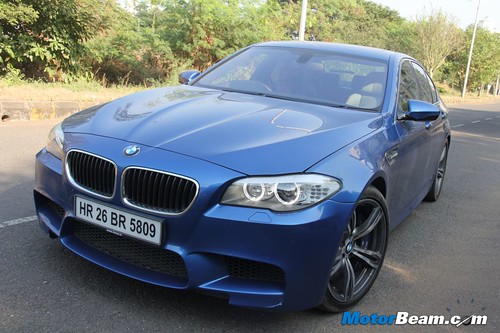 BMW M5 vs Mercedes E63 AMG – Earlier this year we drove the E63 AMG on the Buddh International Circuit (read more about it here). While the E63 AMG is slightly more comfortable it doesn’t feel as glued and sharp as the BMW. The E63 AMG is much louder too and we loved the throaty roar from the V8 motor. Both car’s traction control can be switched off but the E63 AMG’s automatically turns on when you start to loose grip. The M5 will not switch on the traction control until you manually do so. However the BMW M5 is slightly quicker than the E63 AMG. 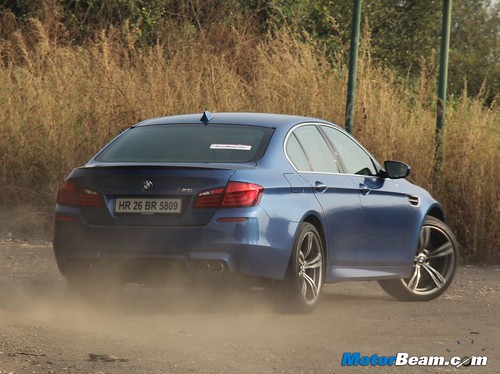 Verdict – The new BMW M5 pleases with its dual characteristics. While it offers supercar performance, razor sharp handling and extreme high speed stability, the M5 doesn’t compromise on daily usability. This high performance 4-door saloon is very drivable and offers an extremely good ride quality too. The generous interior space and big boot give it practicality, while the monstrous V8 engine can turn it into a beast with a minor dab on the throttle. No wonder the BMW M5 is known as the best performing super saloon in the world throughout its five generations.

At the BMW M5’s price, there is no other vehicle which offers such a good combination of comfort and breathtaking performance.