Big trapezoidal light placed at the apron instead of the handle bar, sloping sharp lines and edgy tail lamps are the few radical elements which defines design that had never existed before in India. This is what defines India’s first motoscooter, Honda Dio. Honda entered India with two different scooters targeted at two generations. Honda Activa with mature and practical design was focused towards elder generation and the Dio with radical, easy to customize and easy to maintain design became favorite amongst the younger generation. Launched in 2002, it has received visual upgrades regularly with some new mix and match of paints and stickers. As time passed, the Honda Dio started to grow old amongst the crowd and hence started losing its charm. This indicated need of an upgrade which will freshen up every aspect. The 2012 Auto Expo threw limelight on the new Dio which promised to bring back the charm and Honda took some quick steps to bring it to market instantly. Does the 2012 Honda Dio have the young and wild character still left in it? Or, whether this upgrade has made the Dio like every other commuter scooter with no spirit in it? We will find out in our review today. 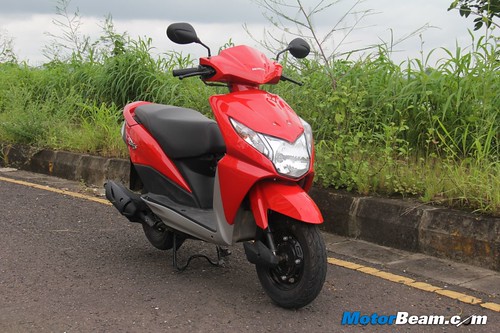 Styling – Styling has been the USP of the Honda Dio ever since it was launched. It brought some hint of international styling of true motoscooters from across the world. With the new Honda Dio, this design has been taken one step further with changes addressing all areas and not a single square-inch has been carried over from the old model. Starting from the front, the headlight looks like it has just undergone some serious workout and has grown in size such that it merged with the blinkers, changed its shape and developed a power bulge. Now, headlight and blinkers look like a single unit but thank God, it isn’t, as it would have turned costly to replace the whole unit in case of minor damage. The shape of the rear view mirrors have been changed to some polygon and they come in black color only. Profile of apron has changed a little with the rest remaining unchanged. However, the headlight unit itself is bold enough to mark the change. 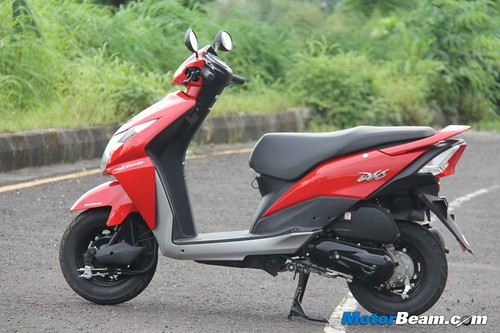 Side profile of the Honda Dio looks like it has been stretched. Side panels are reduced in size and they have made space for matte black plastic. The use of matte black plastic looks excessive and spoils the fun, especially the plastic which extends from the tail light. On the left side, one will find the Motoscooter sticker placed towards the front, a carry-over from the old Dio. Branding now comes in chrome letters and it’s not sticker but a plastic badge. The rear grab rails have also grown big. At the rear end, we found the tail light to have transformed like a Hulk. The size of tail light is almost similar to the size of the headlight in the previous generation Dio. You will get to see just the light cluster and nothing else. Overall, the scooter is still a looker and steals the show with new shiny metallic paint jobs and all black rims. 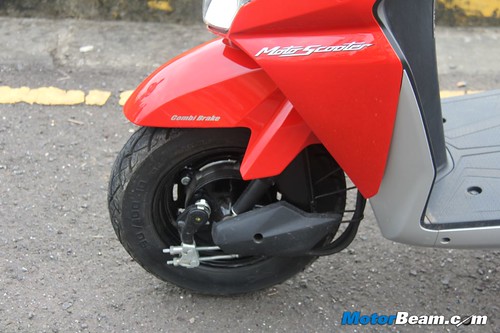 Features – The Honda Dio has been the least priced offering from Honda from the beginning. This pricing they were able to achieve by axing many features off the list. Previous generation Dio was having minimal features but the new Dio has got few on it. Combi Brakes is a feature which appeared first on the latest Activa and now it has trickled down to the Dio as well. We all are well aware about this technology. If we press the left brake lever then both front and rear brake shoes will be activated and both wheels will receive braking force. This helps in reducing the stopping distance. The Dio is India’s first automatic scooter to get tubeless tyres which are safer than tube-type tyres. 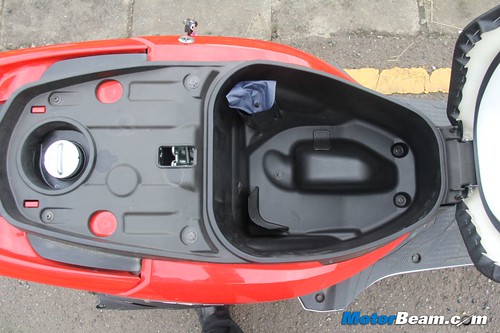 Then there is the huge 18-litre under seat storage space, which can house a full sized helmet with place to keep some knick-knacks around. Keyhole position to open up the seats has now been shifted to the side from the rear thus making it more practical and convenient. 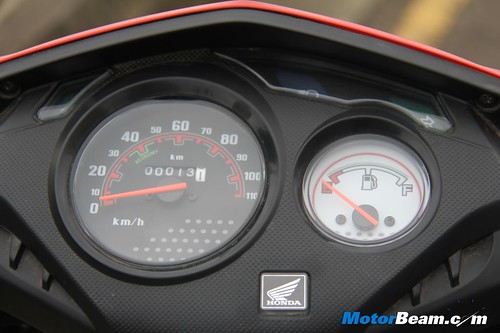 Redesigned speedo-meter console looks nice but could have been better. Plastics around the speedo-meter are well sculpted and have some texture on it. There is the black speedo-meter with old school odometer and fuel gauge with white background, which looks like it was finished in a hurry. Old layout with some change in background graphics also would have looked as appealing as this does. Other than the above features, the Dio now comes with maintenance free battery and viscous paper filter which needs replacement after around 15,000 kms. Indeed noticeable features at this price point. As a customer, we can still demand for more features like digital speedo-meter to suit its character, lockable ignition and mobile charger as it is much needed by today’s college going crowd. 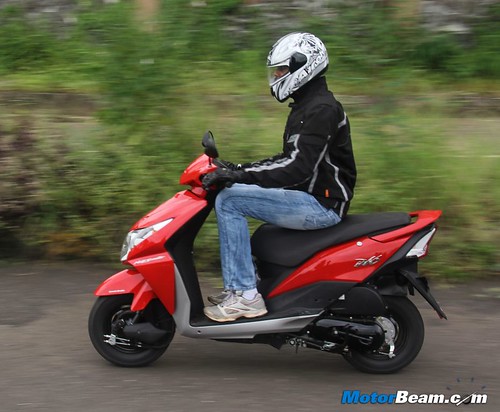 Engine and Performance – The engine which does duty on the Activa and Aviator is now also a power house for the new Dio. This has made the engine, the only engine to do duty on Honda’s scooters in India, bringing in cost benefits with it. It’s a four-stroke, 109cc petrol unit which churns out power of 8 BHP at 7500 RPM and can scratch the road with 8.66 Nm of torque at 5500 RPM. Thanks to its lighter construction, the scooter can jump start with a grunt. Acceleration is good and the scooter feels happy when stretched till 70 km/h and can take you to a peak of 95-97 km/h. V-matic gear box is one of the smoothest boxes but shows some lag initially.

With the new Dio, Honda claims the mileage has also improved by a considerable 15%. The fuel efficiency figure according to ARAI is 66.7 km/l, but one can expect anything between 50-55 km/l depending on riding conditions. 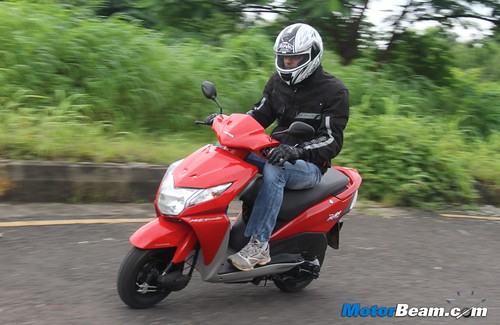 Handling and Suspension – Suspension at both the ends is traditional and telescopic front suspension has still not made its way to Dio even with this upgrade. It is the only area of the Dio that has not been changed. Yamaha’s new offering Ray, which looks like a direct competitor to Dio, has telescopic front suspension which is way more comfortable. Thus it’s a complete let down by Honda on the suspension front as it has many disadvantages associated with it. The one word which defines the handling characteristic of this scooter is ‘Sporty’. You will feel confident on curves, also it’s easy to maneuver the Dio because of its light weight. You can throw-in this scooter at any corner and it won’t fail you. The character of the Motoscooter shows itself while handling it. Straight line stability is also good but it gets disturbed if some big vehicle zooms past by you. After all, light weight construction has some boons and banes. 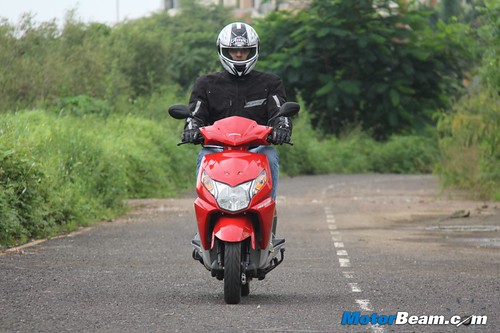 Ergonomics – Ergonomics was the most neglected area in the old Dio. Thankfully, it has become the most addressed area in this upgrade. The position of the rider was more leaning forward in the old Dio but it has now changed to little upright position in the new Dio. Footboard has also grown in size and now there is no obstacle to restrict stretching of our legs. In the old Dio, foot pegs for pillion were the smallest and one can hardly fit just their tows in it. But now foot pegs have increased in length and width. Seat is now bigger and softer too. At the front end, seat has some awkward angle but rest of the portion is wide enough to have a comfortable long ride. Pillion comfort is also addressed in this upgrade, as re-positioned foot pegs makes seating for longer time comfortable and thanks to the longer seat, it is now easy to maintain comfortable distance from rider. 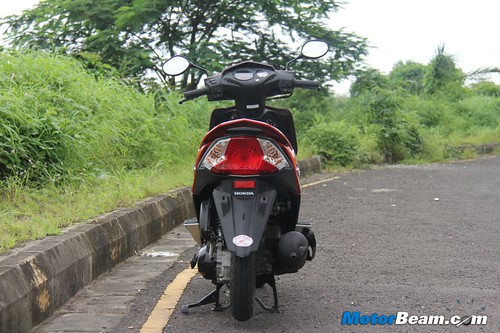 Conclusion – It is a perfect upgrade for a scooter to have with all areas getting addressed and keeping all its good old characters intact. Despite some odd elements, the 2012 Honda Dio looks stunning and helps you in ‘Get Noticed’. Ride quality and comfort is also one bar above from the old model. Now the new Dio has grown so that it can suit grown up males and females along with young college going people. There are still many other options if you are looking for comfort and better quality but no other option yet if you are looking for spirited ride with comfort. At an on-road price of close to Rs. 52,000/-, the Honda Dio is surely a good scooter which lives up to the price you pay. If you want attention, peppy ride and refreshment at a lesser price, the Dio is the best scooter around. 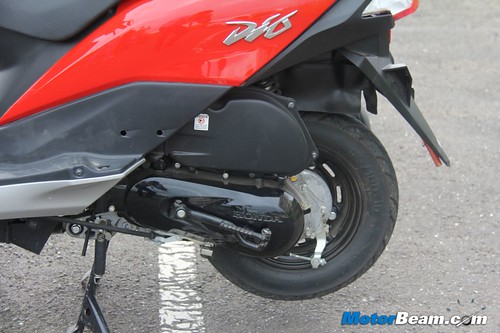 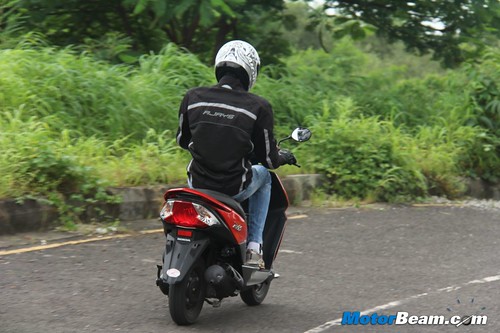