The X1 might be built to a price but there is no compromise on ‘sheer’ driving pleasure.

BMW is famous for starting new segments and the company kick started the luxury compact SUV segment with the launch of the X1 in 2009. In a quick span of two years, Audi was quick to catch up with their own entry level SUV offering, the Q3. In a bid to fend off competition from its Ingolstadt based rival, BMW facelifted the X1, giving it many vital changes. The BMW X1 has led the charge for the Bavarian automaker in India, accounting for a massive percentage of total sales. Based on the E91 3-Series Touring platform, the entry level X1 is the most affordable BMW in India, but does it deliver the same experience as other Bimmers? 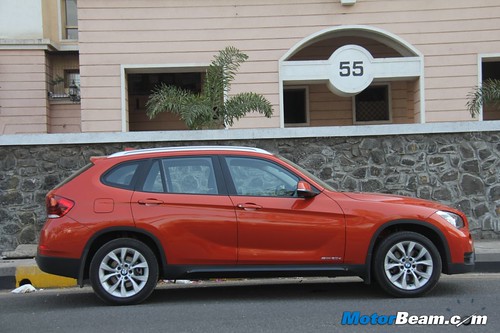 Exteriors – The BMW X1 has never been a looker and the facelifted model is no different. BMW has made minor changes to the exteriors to increase the visual appeal of this crossover. The front and rear bumpers now get glossy black finished plastic cladding which boosts the premium appeal of the vehicle. The headlights of the BMW X1 get corona rings with LED daytime running lights. The slats on the kidney grille differs depending on the variant, high gloss black on the Sport Line or silver on the xLine. There are new foglamp surrounds and turn indicators have been integrated into the rear view mirrors. New colours (we love the Valencia Orange on our test car) and new alloy wheels debut as well. All these minute changes do end up making the X1 look more pleasing to the eye. However the X1 lacks the presence of an SUV, it looks like a jacked up estate and isn’t as striking as one would like a BMW vehicle to be. 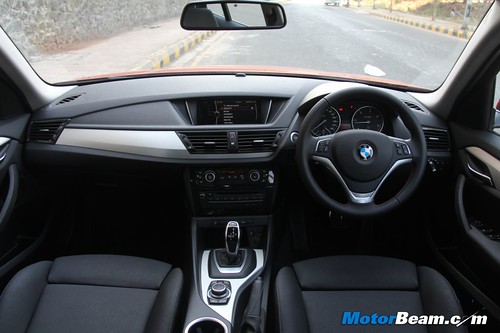 Interiors – Inside the cabin, BMW has given the X1 a newly designed centre console along with the joystick BMW gear lever. The old X1 had average interiors but the new one has an all black theme with brushed aluminium or wood inserts (depending on the variant). Quality levels have gone up too but they still fall short when compared to BMW standards. A new steering wheel has been added with brushed aluminium inserts. The small steering wheel feels extremely sporty to use. The interiors are very functional with all the buttons neatly layed out. There is no electric parking brake and thankfully BMW has used the conventional handbrake. 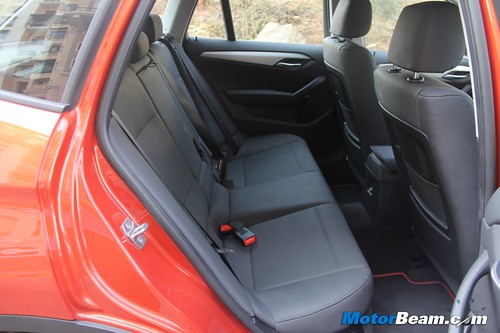 The seats of the BMW X1 are extremely comfortable and offer excellent support all around. Our test car was the Sport Line trim which gets Sport seats for front passenger and driver. These seats are bucket like and easily the best we have seen on a vehicle of this price. Rear seat is best for two and the transmission tunnel makes it difficult for a third passenger from squeezing in. The next generation BMW X1 is going to share platforms with MINI and will thus be a front-wheel drive vehicle with better rear seat space. That said, rear seat passengers have little to complain as the X1 offers decent legroom and headroom. The rear seats can be adjusted in ten stages too. 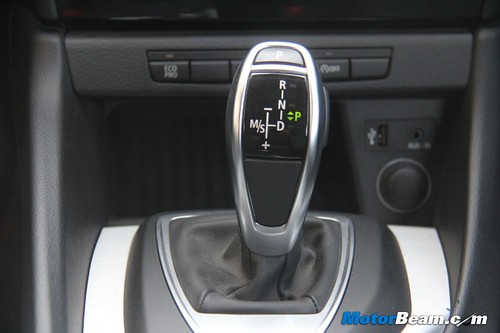 BMW has given the X1 a navigation system which works flawlessly and displays maps on the 8.8-inch screen very quickly and accurately, drawing data from the integrated hard drive. A large panoramic roof, rain sensing wipers, automatic headlights are also on offer. Rear parking camera is optional but should have been standard as rear visibility is quite poor owing to the small hatch window. The dual-zone climate control AC works well to cool the cabin but the blower noise can get loud when you choose higher fan speeds. The instrument cluster is typical BMW with black background and silver rings, looks very classy. A digital display sits in between displaying vehicle information. Boot space is average according to SUV standards. 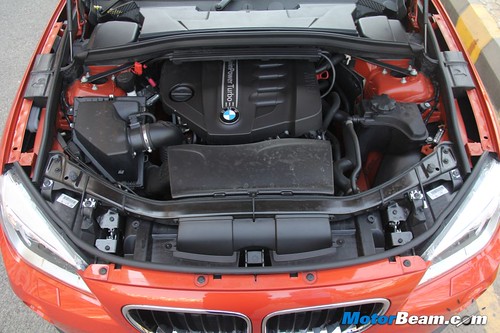 Performance – BMW isn’t offering any petrol engine with the facelifted X1 as the demand for petrol-powered SUVs is very poor in India. The company has tweaked the diesel engine to offer increased output. The 4-cylinder BMW TwinPower Turbo unit produces 181 BHP and 380 Nm (5 BHP and 30 Nm boost over the old model). However the biggest change comes in the form of the new 8-speed automatic gearbox which replaces the 6-speed unit. The new gearbox has closely stacked ratios which results in drastically improved performance, the new X1 feels quicker than before, shaving more than a second from the 0-100 km/hr sprint. The new gearbox is very quick to respond, swapping cogs effortlessly. 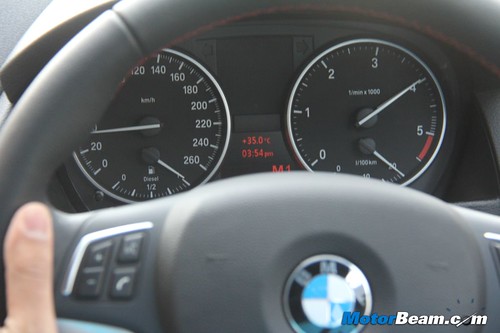 This BMW engine has oodles of performance and is very tractable too. It pulls right from the word go with very little lag. Performance is linear and there is oodles of thrust on tap. This engine is a bit loud though, sounding a bit rough at idle and quite audible near its 4750 RPM redline. Feather the throttle gently and you will seldom hear this powerplant make any noises. One can shift into Sport mode and shift gears manually using the joystick gear lever. In S mode, the X1 holds each gear till the redline. Several EfficientDynamics measures like Brake Energy Regeneration, Eco Pro Mode and Auto Start-Stop function ensure the X1 sips diesel like a miser. 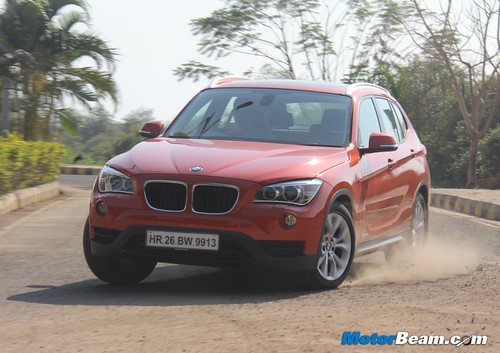 Driving Dynamics – If there is one reason why some one would want to buy a BMW with their eyes closed, it’s the handling. The X1 stays true to BMW’s “sheer driving pleasure” philosophy. Although the company has shifted to an electric steering, the feedback is still terrific. The steering also feels less heavy now. This rear-wheel drive vehicle is fantastically poised and the chassis is supremely communicative too. Body roll is almost negligible and once you arrive at a set of corners, you just can’t resist throwing the X1 from turn to turn. The level of grip is simply glue like and you can feel the groves and ridges of the roads on your palms. 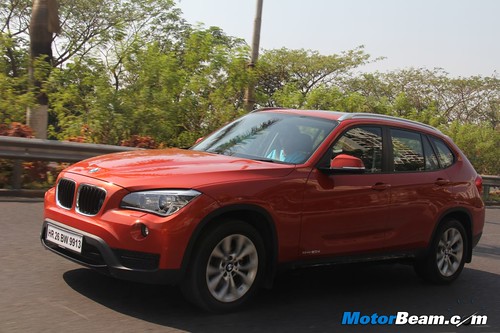 BMW has softened the suspension a bit which has improved the ride comfort on the X1. The vehicle doesn’t feel stiff anymore but does bounce a bit on bad roads. The slight trade-off in ride quality is well worth in lieu of the supreme handling characteristic of this German crossover. High speed stability is naturally good and the X1 stays well planted to the roads at all speeds. Noise insulation could have been better though as wind noise at high speeds gets a bit too audible inside the cabin. A host of braking systems ensure the X1 stops quickly, right in its tracks. 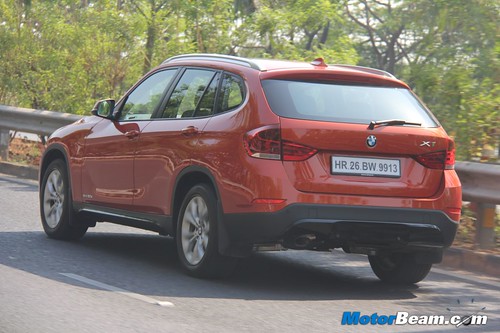 Verdict – The BMW X1 facelift doesn’t take a giant leap over its predecessor but is undoubtedly a more rounded package than before. BMW has taken the X1 and improved all its shortcomings thoroughly, making it more frugal in the bargain. The facelifted model doesn’t feel as basic as before, while at the same time its doesn’t cost a whole lot more (Rs. 1.5 lakh costlier than before). Most importantly though, the German automaker has retained the fantastic dynamics which BMW vehicles are known for. The X1 feels super connected and involving to drive, putting a huge grin on the face of the driver every time he puts the vehicle through the paces. This alone makes the BMW X1 a worthy rival to Audi’s slightly premium Q3.

The BMW X1 might not be a true blooded SUV but who cares as long as it drives so brilliantly. 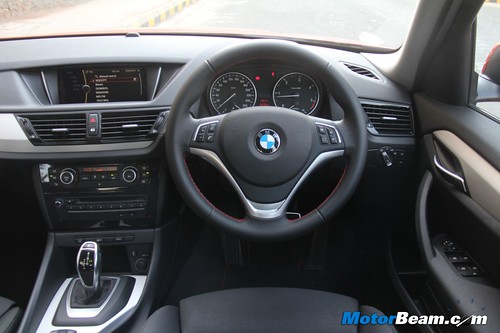 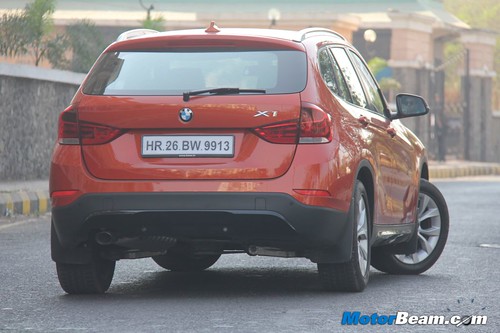 Sedan vs SUV – Which Is Better Suited For India?