There are cars that solve the purpose, cars that you buy for attention, cars that need your attention but there are very few cars that play with your emotions every time you get behind the wheel. Needless to say, we are talking about BMWs here. Majority of the automotive pundits admire the sheer driving pleasure offered by Bimmers. The BMW 5-Series is one of the most appreciated Bavarian that has been tugging heartstrings since 1972. The 5-Series F10 model was introduced in India in 2010, which has been updated in 2013 and this time we get our hands on the new BMW 530d M-Sport to explore its spruced up avatar.

There are no drastic changes on the exteriors, only the keen eyes would observe the fresher looks

Exteriors – The new BMW 5-Series gets one of those subtle visual updates where you need to Google the previous model’s picture and compare the variations. Once you do that you’ll notice that the front fascia gets new adaptive LED headlights with re-shaped corona rings and a re-angled BMW kidney grille that slants a bit forward. The M-Sport body kit gets sharp and sporty bumpers at the front and rear with more pronounced air dams and a diffuser at the back. Other tweaks include LED fog lights, new 18-inch alloys, redesigned tail lights with sharper and thinner elements and ORVMs with LED indicators. 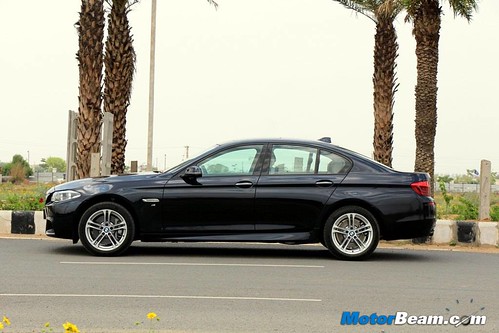 After the sharp and chiseled styling of the 5-Series E60 (fifth generation), the new generation model appeared tad simple to some people but the mature design simply grows on you over time, which makes the new 5-Series look classy and polished. However, some substantial changes would have been appreciated on the new facelifted model with revised crease lines to create some visual drama. The subtle changes do make the updated 5-Series look fresh and crisp but it will pass unnoticed to many eyes. 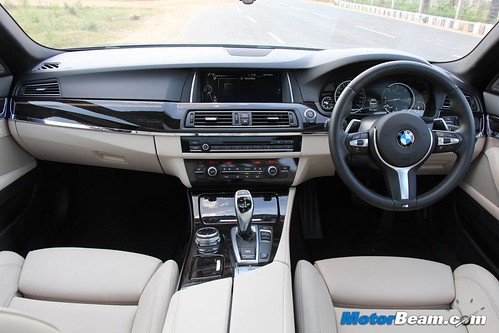 Interiors – Open the door and first thing you’ll notice is the ///M door sill finisher, once you are done staring at the tri-colour performance logo then there’s one more thing to gawk at and that’s the three-spoke M Sport package steering wheel. It is perfectly wrapped in quality leather with precise contours and big paddle shifts that looks sensationally sporty. These are some of the touches, which emotionally attach the driver to a car. The dashboard is more or less the same but you get a plethora of trims to choose from. Our test model had beige biased interior theme with neat integration of black, brown and chrome trims.

The centre console now features a larger 10.25-inch TFT display that comes with an updated iDrive system having a larger dial with a touch pad. The new iDrive makes it more convenient to interact with the car while driving. The bigger screen displays everything clearly and you can navigate through the menu with a tactile and positive feedback of the iDrive dial. The touch pad further helps in dialling numbers and toggling settings. Bluetooth connectivity is extremely easy with your Smartphone and you can even use some of the iPhone apps with BMW Connected App. The powerful 600-watt Harman Kardon surround sound system churns out fantastic quality acoustics, which further amplifies the joy of being in this cabin. 6 DVD changer with USB and AUX connectivity is also provided.

The instrument cluster layout and colour scheme changes according the driving modes, there are 3 in total

Behind the steering wheel there is a new digital instrument cluster, which changes its colour and information theme according to the driving mode. ECO PRO gets blue analogue dials with fuel efficiency related information, Comfort mode has the regular analogue style display while the Sport and Sport Plus mode goes wild and red with digital speedo and fancy RPM display. Quality and attention to detail is brilliant as expected from a BMW. The air conditioning is super effective and precise. Stowage spaces are enough but the glovebox could have been more accommodating.

The front seats are electrically adjustable with lumbar support and driver side memory function. The seats are very supportive and additionally you get extended under-thigh support in the front seats, which is a boon in city traffic and long highway roads. The rear seats are equally supportive but legroom is just average while headroom is decent for tall passengers. Middle passenger wouldn’t feel comfortable at all because of the huge hump and lack of support in the middle. There are two screens provided at the rear for entertainment on long drives. Rear AC vents, wide sunroof and manual sunshades add to the convenience list. The boot space is sizeable at 520 litres, which can accommodate a good load of luggage neatly. 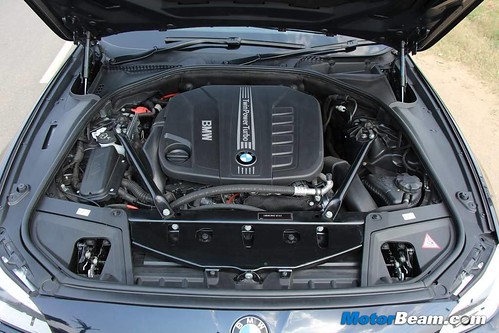 3.0-litre diesel is a gem of an engine delivering power in a super refined manner

Performance – Powering the BMW 530d is a 3.0-litre straight 6 diesel engine that produces 258 BHP of maximum power at 4000 RPM and 540 Nm of peak torque between 1500-3000 RPM. The sweet level of refinement of this mammoth sized oil burner is incredible. Crank up the engine and it settles quickly to a silent idle after a short burble. You won’t be able to hear that ugly clatter of diesel whatsoever throughout the entire rev range of this unit unless you are standing outside the car. In fact, it sounds good and positive like petrol engines at high revs and the unobservant passengers of yours won’t even notice that there is a diesel unit under the hood. 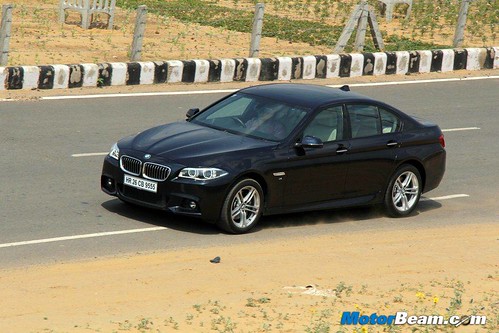 Acceleration is quick, 0-100 km/hr takes 5.8 seconds and power is in abundance

Usually diesel engines have an initial turbolag followed by a strong mid-range with a heavy torque pull then the power fades away at the top-range. In the case of this 3.0-litre 6-cylinder diesel, we couldn’t notice a single flat spot in the entire rev range, the motor just pulls relentlessly from the word go. The meaty 540 Nm of torque kicks in early and continues for a good while and then the tremendous power handles the top range beautifully. This way, you are able to enjoy the entire rev range of this diesel engine and it doesn’t feel strained at all. 0-100 km/hr takes just 5.8 seconds and you get a good pushback in your seat with the impressive acceleration. 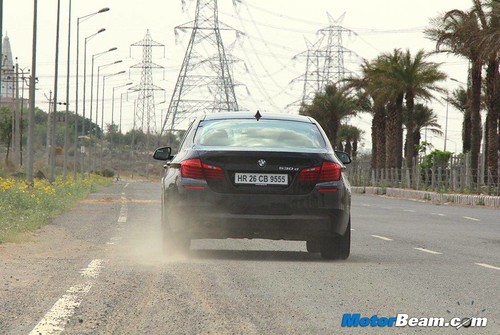 Transmission is pretty quick and returns an improved fuel efficiency of 14.69 km/l

Mated to this engine is a responsive and quick 8-speed Sport automatic transmission and there are four driving modes (ECO PRO, Comfort, Sport and Sport Plus) to which the gearbox and engine respond variably. In ECO PRO mode, the cogs shift early and throttle response is gentle. In Comfort, the gear changes are neutral depending on the throttle input but in Sport and Sport Plus mode, the throttle response is crisp and the gearbox holds each cogs longer to extract maximum power. At the same time, BMW has worked on fuel efficiency which has increased significantly to a claimed 14.69 km/l. We got around 10 km/l in our enthusiastic run thanks to the ECO PRO mode, improved drag efficiency, auto start/stop function and brake energy regeneration.

Driving Dynamics – This is the department for which BMW is appreciated every time one gets behind the wheel and has a wide grin on their face. The new BMW 5-Series offers the same feeling but with a more comfort oriented suspension setup compared to the previous generation model. The suspension has a very balanced nature that provides comfortable ride and sharp handling. It’s the run-flat tyres which tend to transmit those harsh and sharp sections of the road. Otherwise the ride is pliant and it absorbs smooth undulations and bumpy tarmac with ease. The way this size of a sedan turns its nose on bends is commendable and is addictive to a certain extent, so much so that you don’t want to drive in a straight line and instead search for some twisties with the sharp, dead-on handling. 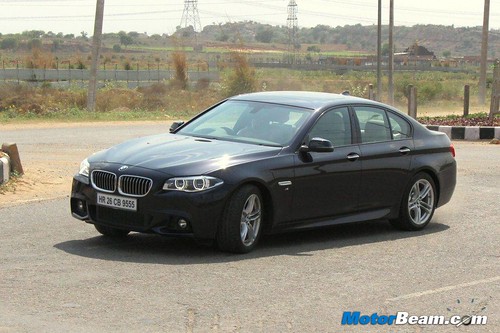 Agreed, gone are those feedback rich hydraulic steering units, which the grey-haired journalists flatter about. We live in the future and the future is all about power assisted steering wheels. Having said that, the steering feedback that the new 5-Series offers is still peerless and second to none in its segment. At slow speeds it is light yet nimble and as the speed increases, it weighs up precisely as you would like for cornering as well as highway stability. You get a solid, weighty and posh feeling while driving the BMW 5-Series with great confidence. With those ferocious horses and twisting force on tap, you need forceful stopping power and the BMW brakes offer that in a brisk manner with positive pedal bite. 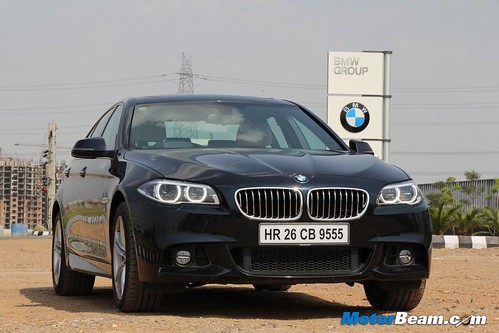 The incalculable safety features makes you feel guarded all the time

Safety – The BMW 5-Series protects you with a plethora of safety equipment on-board. It has got five star Euro NCAP rating where adult occupant gets 95 percent safety, child occupant gets 83 percent, pedestrian gets 78 percent and safety assist tech on the car gets a rating of 100. The car is equipped with Active Protection, which, in critical situations, pre-tensions safety belts, moves the seats to an upright position and windows are closed. Airbags are provided for all the passengers and ABS, Dynamic Stability Control, Cornering Brake Control takes care of the car’s stability. 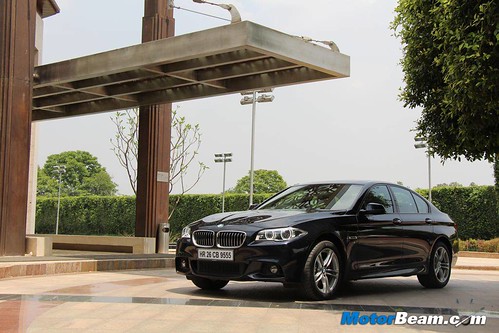 Verdict – As we mentioned earlier, the BMW 5-Series offers an emotional connect to the driver, simply because it is engaging to drive and it will never disappoint you whenever you sit on the driver’s seat. The 3.0-litre diesel engine never feels out of power and offers serious performance while being fuel efficient at the same time. The minuscule styling changes on the facelifted model though is the nip in the bud and we would have appreciated some radical visual updates. Also, the legroom for rear seats is in short supply for tall passengers. That aside, look at the big picture and the amount of luxury and equipment the Bavarian offers. With the BMW 5-Series, you can arrive in style, drive with a big smile and enjoy every single mile.

In terms of styling, the new BMW 5-Series is more or less the same but the equipment list has increased for more convenience and the engines have been tweaked for better performance and improved fuel efficiency. The BMW 530d is the most engaging car to drive in its segment. 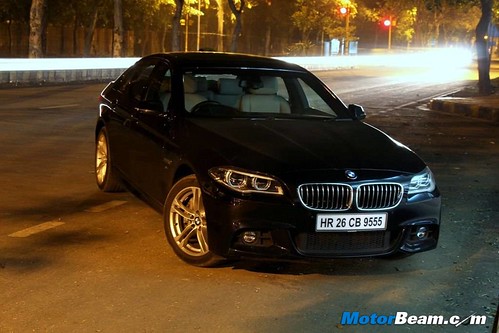 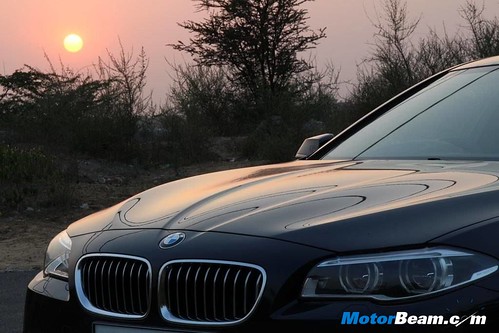 Very few cars move your soul like the BMW 5-Series