The Fiesta is without doubt the most fun to drive car in its class, it’s the best looking too.

One of the best driver’s car in the country, the new Ford Fiesta failed to sell well in the Indian market as it was priced too optimistically. Ford had rushed the launch, not concentrating on localisation and the result was a fabulous car not taking off in one of the most competitive segments ever. Post the poor sales of the Fiesta, Ford launched the EcoSport which set the company’s sales chart on fire. The EcoSport and Fiesta have a lot in common and now Ford is able to benefit from the localisation it did for the EcoSport by using the same parts on the Fiesta. The update to the Ford Fiesta is mostly cosmetic but a lot of parts are now sourced from India which will help the American automaker price their flagship sedan very aggressively. We get behind the wheel of the facelifted Fiesta to gauge the changes.

The changes to the front of the car dramatically boosts its appeal, the rear gets quite a few changes as well

Exteriors – The pre-facelift Fiesta’s design was a love it or hate it one but the new car is going to instantly appeal to a wider audience. The front styling is very bold with a large trapezoidal grille (with five chrome blades) being the highlight here. Still, it’s really the reminiscence to super car maker Aston Martin’s styling language which ups the appeal of the Fiesta. Ford owned Aston earlier and the new design language of the American company seemed to have stemmed from there. Other changes include sheet metal changes at both the front and rear, the hood now seeing a bulge while the headlights, tail lights (now wider), front, rear bumper (gets a chrome strip between the reflectors and the lower part is finished in black to reduce the visual bulk) and boot (with a lip spoiler) also see changes. 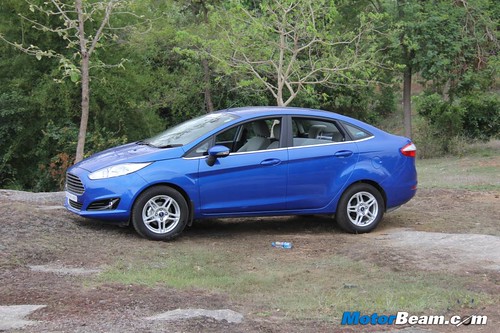 The Kinetic Blue colour isn’t offered at the moment but will be available later.

The sheet metal changes might not be instantly visible but has resulted in an improved aerodynamic efficiency by 3%. The vehicle also gets a new design for the alloy wheels (available on the top-end Titanium variant and similar in design to many Ferraris) and the overall result is the Fiesta looks the most sporty vehicle in its segment, no questions about it. Two new colours have been added as well, Golden Bronze and Smoke Grey. The Fiesta is available in six colours but the Blue you see in the top picture will be available only later. Other colours include Diamond White, Moondust Silver, Paprika Red and Panther Black. 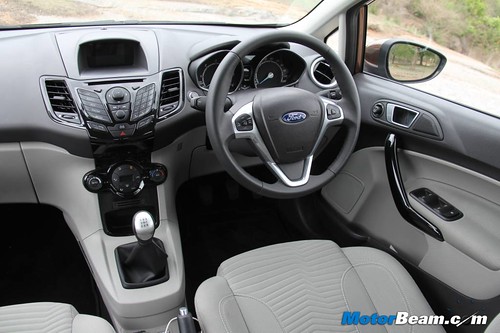 Interiors – The Fiesta has always had a sporty cabin with the all black interior but Ford has now given the cabin the two-tone treatment, the upper half of the dashboard is finished in charcoal black while the lower part gets light grey. The centre console and inside door handles of the car gets piano black finish which makes the cabin look richer while the seats get the beige treatment for that airy feeling. The vehicle gets the Sync system which we earlier experienced in the EcoSport. When Ford launched the Fiesta in 2011, it came with voice commands but the Sync system is more advanced and works flawlessly on the car, it also gets the Emergency Assistance System which dials an emergency number to get you first aid quickly in the unfortunate case of an accident (only when the airbags are deployed or the fuel pump shut off is detected). Sync also gets AppLink which is for the first time in India, it lets phone apps display information on the Fiesta’s infotainment system. Currently two Indian apps are available for the same and one of them is MapMyIndia’s Explore which is quite handy to find places on the move. 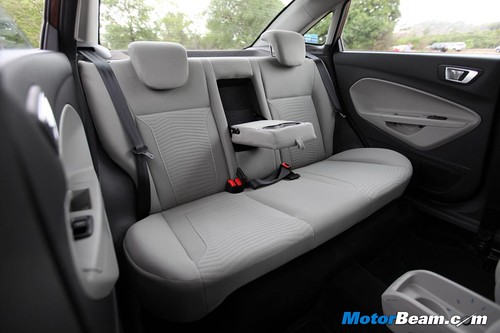 There are no changes to the interior dimensions of the Ford Fiesta and thus the biggest drawback of the car remains unresolved – rear seat comfort. The rear seat is low and legroom is lacking, thereby making the car best for two adults at the front and children at the rear. Still, the front seats are comfortable with good back support, the 430-litre boot is big and the quality is decent too, there is that feeling of a tank like build. The top end variant now gets automatic headlights and wipers along with a push button engine start/stop button with keyless go, ambient lighting and cruise control, while all variants are offered with ABS, EBD and driver side airbag as standard. Ford has also added puddle lamps on the rear view mirrors, while the lighting in the instrument cluster and centre console screen has changed from orange to ice blue, as seen on the EcoSport. There are decent storage bins inside the cabin, including a parcel shelf which is quite big. 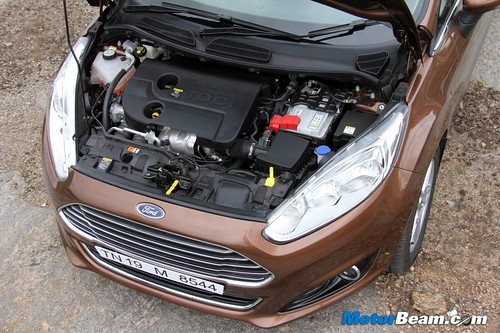 The 2014 Ford Fiesta is only offered with a diesel engine, no petrol motors offered

Performance – The pre-facelift Ford Fiesta was offered with both petrol and diesel engine options, the gasoline motor also getting a state of the art, 6-speed dual-clutch PowerShift gearbox with a 10-years/2.4 lakh kms warranty. However, the updated Fiesta will be offered with a diesel engine only. Ford has learned that 70% buyers in this segment prefer a diesel engine and to simplify the Fiesta line-up, the company has dropped the petrol option altogether. If demand shifts towards petrol engines in the future, Ford will re-consider the introduction of a petrol option for the Fiesta. Globally the company offers the car with the same 1.0-litre EcoBoost petrol engine that powers the EcoSport, this pint sized turbocharged mill can really transform the performance of the Fiesta. 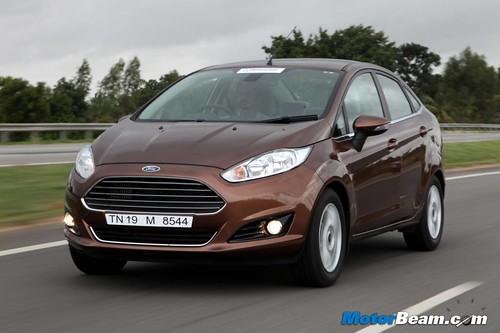 There are no changes to the oil burner of the Fiesta, the 1.5-litre TDCi mill continues to produce 91 PS of power at 3750 RPM while torque output is 204 Nm at 2000-2750 RPM. There is some turbolag below 1800 RPM but once you get past that, the car offers impressive performance, pulling strongly and redlining cleanly to 5000 RPM. The mid-range is strong, the Fiesta gathering good momentum and not feeling out of breath, in spite of having just 91 horses on tap. In fact, keep the pedal to the floor and the Fiesta will keep pulling to higher triple digit speeds without a hiccup, only to be bogged down post 160 km/hr. Still, keep the engine on the boil and it rewards with peppy performance. 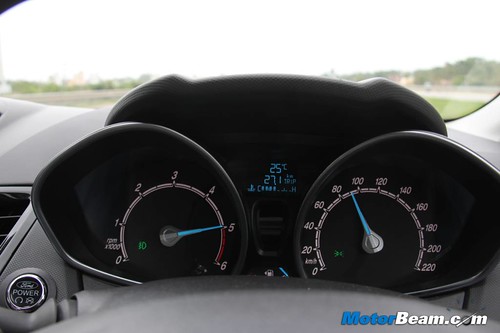 The Ford Fiesta diesel now boasts of an impressive ARAI mileage of 25.1 km/l

The 8-valve diesel powerplant of the Fiesta is paired to a 5-speed manual gearbox which offers smooth shifts with a light clutch to match. 100 km/hr comes up in third gear while 100 km/hr in top gear results in 2200 RPM on the tachometer. The 2014 Ford Fiesta has spent 150 hours in the wind tunnel and that reflects in the improved mileage of the car. The ARAI certified mileage is 25.1 km/l (up from 23.5 km/l), with the diesel powered Honda City having the highest ARAI mileage number. Considering the City runs on 175 mm tyres and the Fiesta uses 195 mm rubber, Ford hasn’t compromised on safety to boost the efficiency of the its flagship Indian sedan.

Driving Dynamics – The Ford Fiesta has always been known for being a driver’s car and the new one isn’t any different. The steering is an electric unit with Pull Drift Compensation Technology, which basically compensates for directional shifts caused by wind and road conditions. The steering is light at low speeds but weighs up brilliantly at high speeds, it’s feel-some and feedback rich too. The stiff body of the Fiesta gives it terrific handling, it darts into corners with utmost precision, maintaining its line with negligible body roll. In fact, the Ford Fiesta is the best handling car in the C-segment. 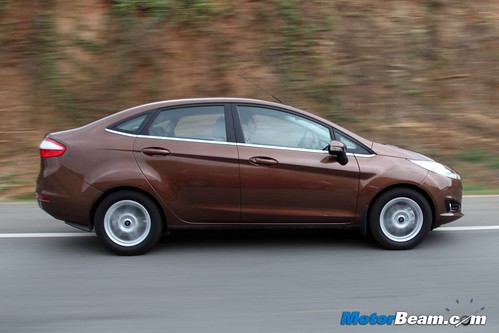 Ride has been improved while NVH has been reduced, the Fiesta glides over bad roads

Ford has further improved the suspension for an improved ride quality. The balance between ride and handling was already terrific and the new car is as good as ever. It glides over bad roads and doesn’t transfer much to the occupants. On most roads, you don’t even feel the tarmac and that’s impressive. The Fiesta is very poised at high speeds, it simply doesn’t budge, remaining glued to the road. The NVH levels have been improved too and wind, tyre and road noise is mostly kept out of the cabin. Braking performance is good and the pedal has good modulation too. 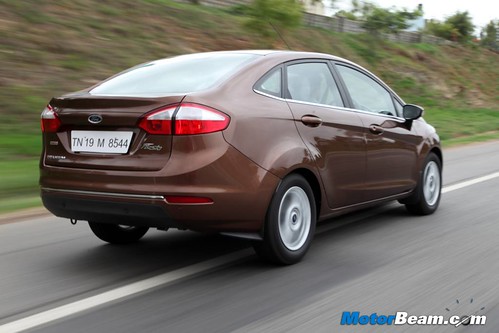 Verdict – The Ford Fiesta has always been an impressive car and now it benefits from local content which has resulted in aggressive pricing. Still, the Fiesta isn’t a car which provides a good rear seat experience and competitors are much accomplished in this regard. Ford is positioning the 2014 Fiesta as a niche product at those who appreciate technology and like driving. If you are the person who likes to take to the wheel almost always and like driving, there is nothing that comes close to the fun experience offered by the Ford Fiesta, more so at these prices which make this car terrific value.

The Ford Fiesta continues to be the best driver’s car in its segment, with dynamics which can put a smile on your face almost always. With a frugal diesel engine in its arsenal, the Fiesta is a car which is both fun to drive and cheap to run.