The Karizma R gets much more punch along with a styling overhaul, is more value now

The original Karizma R was the bike which started the true performance motorcycling segment in the Indian market. Despite it was a sports cruiser in disguise, more capacity in our market meant performance. After getting several updates in terms of colours, graphics and engine cowling, the time has come when a new design gets a thorough update. The new Karizma ZMR has been extensively reviewed by us and the R is the carbon copy which is only distinguished by the slight changes in the engine. Everything else remains the same. We tell you the differences between them in every aspect and tell you if the R is any better than the ZMR or is it the other way around.

Motor Quest: Hero Honda launched the Karizma in 2003 with the ZMR version making its debut in 2009. Earlier this year, both the Karizmas were updated with styling changes coming courtesy of EBR. They also got a much needed power bump. 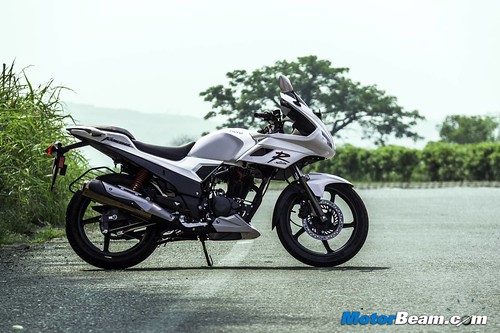 Long, skinny and sharp side profile is the acceptable part of this design

Styling – At first glance, it is a very lengthy motorcycle with sharp lines and edgy panels everywhere. At the front, an all new U-shaped cowl houses two vertically stacked headlights and it also has turn-indicators built into them. The biggest update to the cowl and the motorcycle is the angel lights which are part of the turn-indicator assembly itself. The front looks finicky in pictures but in real life it does not disappointment that much as the rest of the bike is quite edgy and the rear and side profile of the Karizma R does manage to look sporty. The fatter tyre and 18-inch alloy wheels help mark the presence of the Karizma on the street with a exposed chain case being another new addition. The boxy side panels are pure turn-offs though and they could have been a lot better. Just like the ZMR, the R has atleast a good set of graphics on the body panels and the motorcycle has a white color option now. Overall, at first glance, it is disappointing but if you are going to buy it, you will easily live with the EBR inspired Karizma. 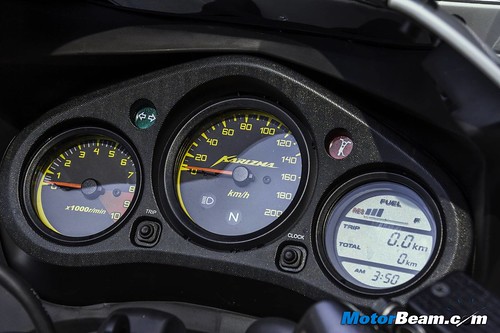 Instrument Cluster and Switchgear – The Karizma R continues to get the same boring yellow three pod cluster which shows RPM, speedo and at the rightmost is the digital part. The digital part ends up showing a clock, one trip meter and fuel gauge. Like any Honda bike switchgear, the one on the R is more than a decade old and does not have an engine kill switch. Switchgear design and quality is not that great either. 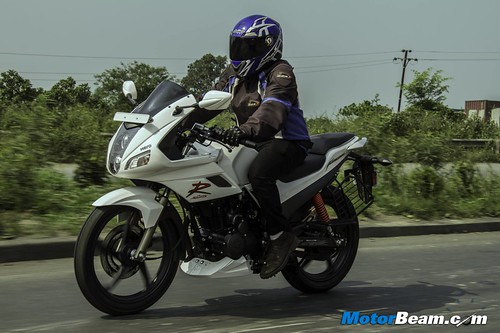 Ergonomics – The upright riding position is long gone as the upright handlebar has been replaced with lower set clip-on bars which coupled with a slightly raised riding position and rearset footpegs are a standard norm on these bikes, you can lock your knee in with the slim fuel tank easily and overall riding position is now towards the committed side. The pillion seat is more comfortable thanks to the split seats and the split grab handles help to hold on to something. Mirrors are big enough and they give good visibility of what’s behind. 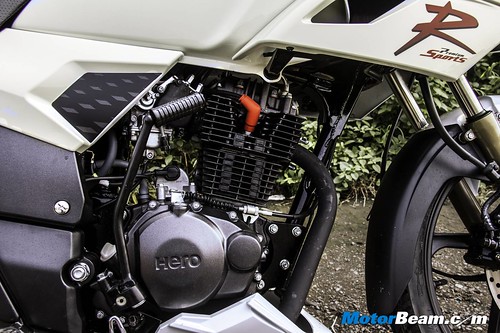 Performance – Powering the Karizma R is the identical 223cc engine as the previous bike but it just gets more horsepower from the carburetor engine. The power has been increased with the help of increase in compression ratio and changed to the head of the engine. Our VBOX numbers suggest that the top speed has not increased much as its does 126 km/hr while the previous bike was in the same ball park. Acceleration is key and hence 0 to 60 km/hr timing is 4.06 seconds while 0-100 km/hr takes 11.59 seconds which is faster by 1 second compared to the previous version with less power. 0 to 60 km/hr run has been reduced by .5 seconds. First gear maxes out at 35 km/hr, second at 70 km/hr, third at 90 km/hr, fourth at 112 km/hr and fifth takes it all the way to 125 km/hr. The Karizma R starts feeling very sluggish post 110 km/hr and crouching under the windscreen makes a significant difference in reaching the top speed quicker. 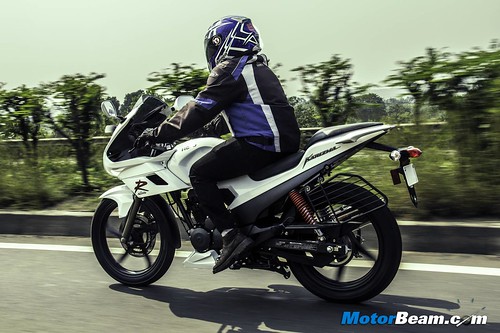 The 223cc 2-valve engine is the same in terms of refinement and the motor is almost butter smooth when kept under 5000 RPM. There are vibrations from the engine which kick in the mid and top-end of the rev range and is very noticeable, being felt on the handlebars and footpegs. The gearbox is notchy for unknown reasons and is not as super slick as before. 100 km/hr in fifth gear results in 6500 RPM on the tachometer while redline comes in at an early 8500 RPM. 29.5 km/l in the city and 32.5 km/l on the highway are the numbers we got while testing this brand new bike. Overall, the bike performs the same as before but the pure concentration of performance means its only numbers which do talking, the feel of the bike remains the same with minimum changes on refinement and economy. 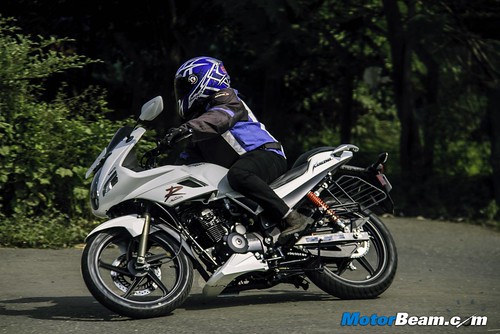 Riding Dynamics – The chassis on the Karizma R is the same single tube diamond frame which continues in the new Karizma as well. There are no changes to the underpinnings and the only change is a fatter tyre at the rear which has replaced the 100 section with the 120 section that also ends up looking odd. Suspension on the front offers no communication but remains feather light for city duties. The steering is light and the turn-in is good but not that great although the tyre compound are good. The heavy kerb weight and long wheelbase does not make it fun to throw the R around tight corners as you end up feeling the weight at the limit due to the softer suspension setup despite the spring preload being set at the stiffest. 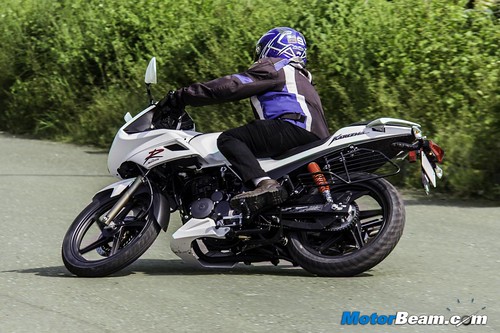 The Karizma R does take sweepers well and feels stable with mid-corner bumps not unsettling the bike which is a good thing. At high speeds, the Karizma R does feel a wee bit hairy and that’s despite the long wheelbase and high kerb weight but due to light front end. Needless to say, the Karizma R is a forgiving bike to ride and that makes it a perfect bike for riders who want a easy ride to live with on a daily basis yet a fast bike for newbie riders to learn on. Disc brakes at the front provide good stopping power and despite a drum at the rear, braking performance is adequate. However, the feel from the front brake is wooden and isn’t feedback rich. 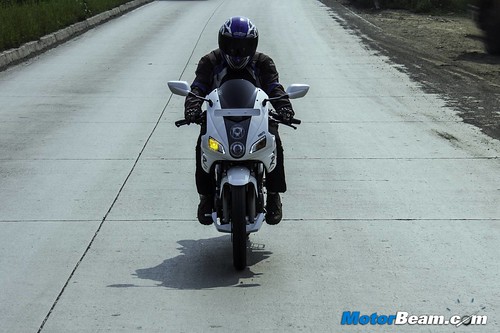 Verdict – The Karizma R was the original Karizma which finally gets the power bump and major styling changes. The updates in every aspect should help it keep running in the market for some time as new models from Hero and other competitors are to come soon and these motorcycles will help start the performance segment for newbie performance hungry motorcyclists. The Karizma R is a decently fast motorcycle with a proven engine and is backed by Hero’s famous and humongous dealership and service centre network. It offers a value for money quotient which should appeal to the mass market as the Karizma brand has a big fan following. There is no stopping the new Karizma R as it has already set the cash registers ringing for Hero MotoCorp.

The Karizma R may not be as polished as before but it isn’t as rough as the bikes of the last century either. The Hero Karizma has the fan following and will continue to sell in large numbers in places where styling does not matter. If a person wants comfort and a powerful cruising machine which offers peace of mind with the Hero backup, then this is the bike to buy without any hiccups. 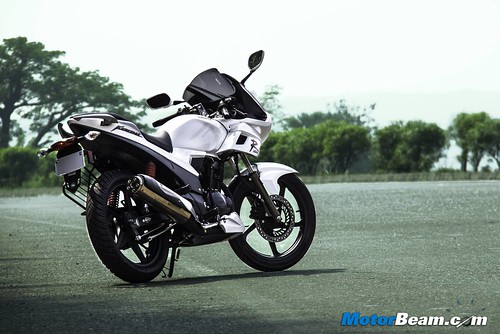 Quick, reliable, value for money bike and Hero’s backup is the forte of the new Karizma