The new Range Rover Sport is amazing to drive but is still a Land Rover at heart.

Imagine a car which has a 9 month waiting period in a market with choices galore (Europe) and the willingness of buyers to pay a premium of more than Rs. 50 lakhs to get their vehicle sooner (in China). We are talking about the hugely capable and much in demand new Range Rover Sport, which has entered its second generation and landed in India quickly after its global launch. Unlike the old Sport which was based on the Discovery platform, the new one uses the aluminium underpinnings from the Range Rover which we all know is a hugely capable machine. We had driven the new Range Rover Sport earlier this year and post the launch, we got to sample its wide range of abilities in Lonavala.

The interiors of the Range Rover Sport will pleasantly surprise you as the cabin is full of top notch materials which gives you an instant sense of comfort and luxury. We love the Evoque inspired steering wheel and touch screen display system. The dashboard is very much like the flagship Range Rover which is certainly a good thing. The cabin has plenty of space and the new model also comes with optional seats for the last row of passengers (Land Rover likes to call this secret seats). The well laid out controls and the plethora of features can make you forget you are in a car which can conquer most things thrown at it.

Land Rover offers the new Range Rover Sport with two engines – the fire breathing 5.0-litre Supercharged V8 which outputs an an impressive 510 PS of power and 625 Nm of torque. This petrol engine enables the Sport to sprint from naught to the ton in a mere 5.3 seconds. The car we drove was equipped with the more popular engine of choice, the 3.0-litre SDV6 which produces 292 PS of power and 600 Nm of turning force. Both motors are mated to a 8-speed automatic gearbox. We drove the 5.0-litre petrol powered Range Rover Sport earlier this year and it offers terrific performance, acceleration is strong and the exhausts are very pleasing to the aural senses. 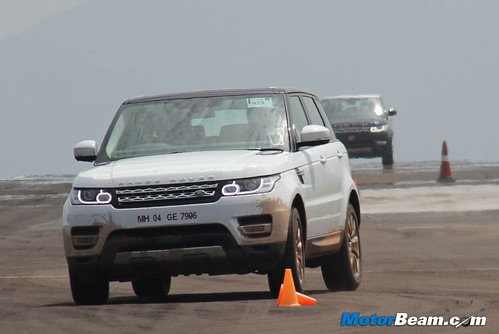 The new Range Rover Sport has dropped quite a lot of weight and is now lighter by up to 420 kgs or 39% (depending on the variant). The aluminium chassis along with various systems like Adaptive Dynamics (monitors vehicle movement 500 times a second and alters the dampers), Dynamic Response (gives independent control to the front and rear axle for active lean control), Torque Vectoring System (enables engine braking to distribute torque to all wheels during cornering to balance grip) make the Sport defy its weight when cornered enthusiastically. At the Aamby Valley air strip, we conducted quite a few tests including straight line braking, corner braking, slalom tests, lane changing and the Range Rover Sport emerged on top impressing with its dynamic prowess. 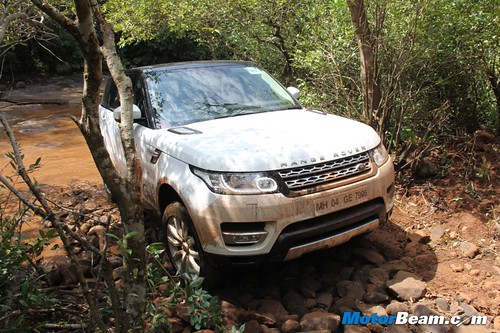 Although the new Range Rover Sport is the fastest and most agile Land Rover, it proudly exhibited its off-road genes as soon as we drove into the treacherous terrain at 19 degree North (off-road location in Aamby Valley). I have been to the same circuit in a Mahindra Thar earlier and boy did I sweat like crazy. In the Range Rover Sport though, everything was effortless. All you needed to do was steer and the vehicle did the rest. Never did it let you feel what terrain you were traversing. What made this even easier was the all around cameras which give a good view of the ground. The water wading capacity is an impressive 850 mm which along with a wheel articulation of 546 mm was not even close to being challenged on our off-road course. The vehicle also gets a wade sensing feature wherein the outside rear view mirrors have ultrasonic sensors to monitor the water level outside.

The 2014 Range Rover Sport comes with the option of Auto Terrain Response 2 which basically selects the terrain program by monitoring the terrain. To look busy I chose to manually toggle the terrain response system. Simply flick the rotary dial and you are good to go. With the hill descent control activated, all you need to do is change maximum speed by using the right side buttons on the steering wheel. This way the Range Rover Sport will keep going at your desired pace and you don’t need to accelerate or brake. During very challenging terrain (like steep turns with sliding rocks), you can actually feel the vehicle’s systems intervening to keep the Sport on track. 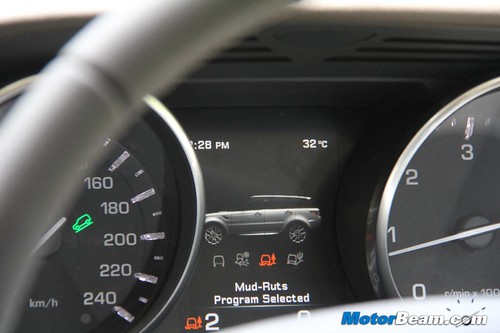 Throughout the off-road course, the Range Rover Sport’s diesel mill flaunted effortless performance. While 0-100 km/hr takes just 7.2 seconds, what was even more applaud worthy was the smooth shifts from the gearbox and the refinement levels of the motor, you simply never feel it has a diesel engine underneath. Performance is linear and there is more than enough pep to haul this 2 tonne plus monster on any given road surface. 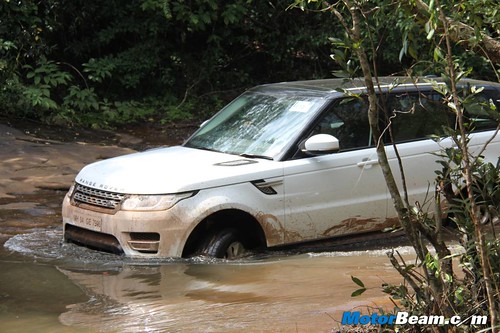 Then there is the famous Range Rover ride quality, the Sport simply wafts on the road and the air suspension helps it glide through the worst of irregularities without transferring much inside the cabin. Fantastic sound stage, excellent quality, comfortable seats and commanding view are few of the things which makes a journey inside a Range Rover so special. Add to that a large boot and complete isolation from outside noises and you know why the new Range Rover Sport is so much in demand. 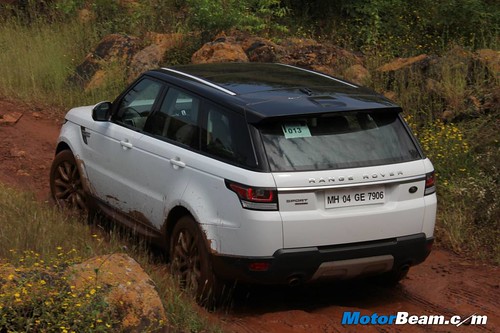 When we drove the new Range Rover earlier this year, we had absolutely no doubts about the capabilities of its younger sibling. After having spend some time with the vehicle (on the Gaydon test track and now in Aamby Valley), we simply can’t help but fall in love with this hugely capable machine. Whoever said you can’t get the best of everything, was oh so wrong. The new Range Rover Sport offers the best of so many things at once that there simply isn’t anything which can come close to offering the wide breadth of capabilities as this Land Rover. It indeed is on ‘Another Level’.

The new Range Rover Sport is dynamically rich but at the same time it hasn’t forgotten its roots because it can go off-road in style and traverse any given terrain without a hiccup.