The Skoda Octavia looks very promising on paper and that becomes very evident once you get behind the wheel.

You read it first on MotorBeam. The D-segment is one of the most interesting segments in the car market as buyers can differ drastically in terms of what they want from their vehicle. While some buyers want performance and handling, others might prefer comfort and features. There are also those who value brands and want a vehicle whose logo carries more weight than the product itself. Amidst these vast differences, there are cars which are ‘jack of all trades and master of some’. The D-segment isn’t that big either with only seven cars vying for the attention of customers. The segment has evolved and how. Back in 2001, it was only the Skoda Octavia which was present in this segment. 12-years hence, the Octavia makes a return to claim back its glory. 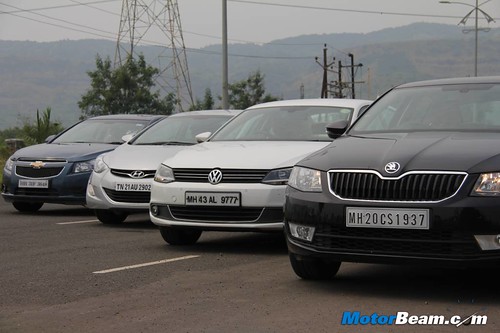 We actually decided to bring each and every vehicle in this segment into a head to head shootout. However the Honda Civic and Toyota Corolla were immediately removed as the former has been discontinued while the latter is going to be replaced by the next generation model which is already on test in our country. A facelift of the Renault Fluence is around the corner so there was no point including it either. We did put the Chevrolet Cruze against the trio of these cars but only realised that it’s simply not up to the mark. While the Cruze is terrifically quick in a straight line (it’s the most powerful diesel car in its segment), it lacks in other areas where the other three better it easily. So with all that set, we headed out in the Skoda Octavia, Volkswagen Jetta and Hyundai Elantra over a mix of roads to find out which car is the best all-rounder.

Motor Quest: Skoda can be credited for kick starting the D-segment with the Octavia in 2001, the Corolla and Optra followed in 2003, while the Laura and Civic were launched in 2005 and 2006 respectively. 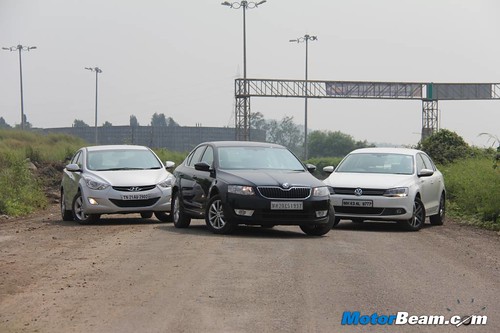 Styling – If you are a believer in love at first sight then there isn’t much here for you. Because all the three cars grow on you over time. The Volkswagen Jetta is often referred by laymen as a bigger Vento and although it does carry Volkswagen’s family design language with little differentiation, it’s styling is unmistakable on the road. You immediately appreciate the rear of the car which is a bit Audi inspired. The Octavia on the other hand is filled with Skoda design genes. Remove all the badges and ask any one who has seen a Skoda car before to identify the new Octavia and trust me, they will guess at first instance. The Octavia might be carrying Skoda’s new design language but the elements on the body are very much Skoda. 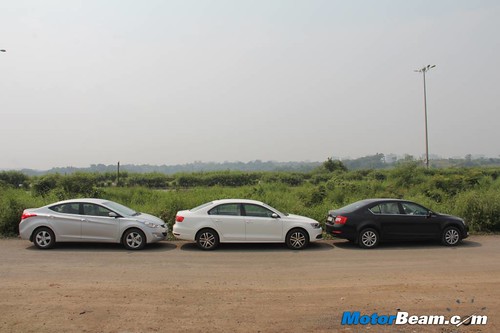 Coming to the car which we feel looks the best in the segment, the Hyundai Elantra is undoubtedly the vehicle which is the most soothing to the eyes. Although Hyundai’s familiar design language makes people draw comparisons with the smaller Verna, we feel the Elantra does have a unique styling of its own. The fluidic styling works wonders at the front but what really makes the Elantra such an appealing car are the swooping lines and coupe like rear. No wonder the Elantra is such a hot seller in the US where external appearance has high importance. So the Jetta impresses the least and the Elantra impresses the most while the Octavia is somewhere in between, it grows on you but it’s the Elantra which will make heads turn.

Interiors – There is absolutely nothing to fault with the interior quality of all these three cars. Excellent fit and finish levels are found in each of them, which is very much expected from cars of this price. The Jetta’s dashboard is plain and simple and that gets it into boring territory. The Octavia’s dashboard is very appealing with the unique steering and nice choice of colours. But when it comes to the overall appeal of the dashboard, Hyundai again comes out on top. The Elantra’s dashboard is simply splendid and the design is oh so eye catchy. What further tilts the interior verdict in the Elantra’s favour are the features on offer. While the other two cars come with a key, the Elantra uses keyless entry with button start. We also like the Elantra’s instrument cluster better than the other two but the Hyundai is the only car which doesn’t show distance to empty on its multi-information display. Also the infotainment system on the Elantra isn’t as easy to use as on the other cars. In terms of features, all cars are well matched as you get all the bells and whistles expected as standard on these vehicles (some cars might offer something extra but that isn’t a deal breaker as you end up paying more for that variant).

No matter what your usage is, whether you plan to corner hard or make a style statement at office, a car of this price needs to tick a few boxes and interior space and comfort is primary amongst those. There is little to choose from between these three cars when it comes to rear seat space as all three are equally good. Where the Elantra lacks is headroom as the slopping roof does eat into the cabin and the seat is itself placed a bit low. The Jetta has always been known for its rear seat comfort and the Octavia manages to better it, offering terrific comfort to rear seat occupants. All three cars come with rear seat AC vents but the Elantra also comes with audio controls on the rear arm rest, a neat touch. The front seats of the Elantra get ventilated function which does make you feel comfortable on long drives. In terms of boot capacity, there is absolutely no competition, the Octavia annihilates the other two, offering 590-litres vs the Elantra’s 420-litres and Jetta’s 510-litres. 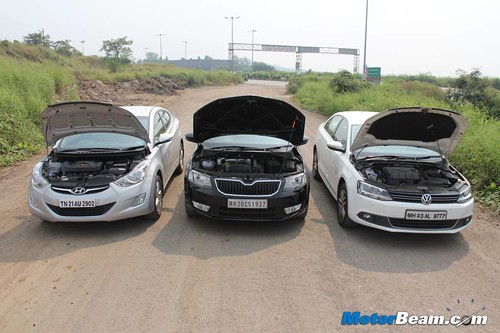 Performance – All the three cars come with the option of a petrol or diesel engine, coupled to manual and automatic transmissions (the Jetta’s diesel engine is only available with an option of an automatic gearbox, no petrol automatic here). The Hyundai Elantra‘s petrol engine is more powerful than the 1.4-litre TSI engine doing duty in the Volkswagen Jetta and Skoda Octavia. The Elantra produces 149.5 PS and 178 Nm. The Jetta produces 122 PS and 200 Nm while the Octavia produces 140 PS and 250 Nm (same engine as the Jetta but higher output). In spite of the Elantra having more power, it isn’t as fast as the other two. Simply put, the petrol engine on the Elantra is no match for the 1.4-litre TSI motor from Volkswagen. While you have to rev the nuts of the Elantra to have fun (the Elantra’s motor has a higher redline and does pull decently at high RPMs), the 1.4 TSI offers instant gratification with a good mid-range punch. 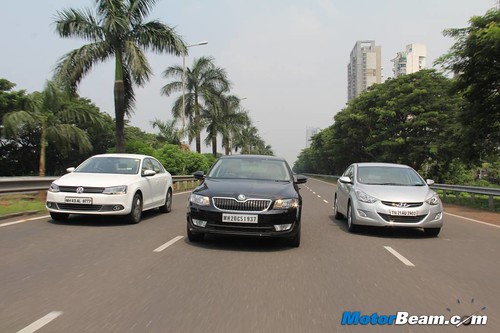 Coming to the diesel engines, the Elantra’s smaller engine has lesser output (1.6-litre unit producing 126 BHP and 260 Nm) while both the Jetta and Octavia use the same 2.0-litre motor with 140 PS (143 PS in the Octavia) and 320 Nm (produced in a wider band in the Octavia). The Elantra’s diesel powerplant isn’t in the same territory as the other two and between the same engined cars, it is the Octavia which has an edge, thanks to its lighter weight, courtesy the MQB platform. When paired to the 6-speed DSG box, the Jetta offers paddle shifts but the Octavia doesn’t, surprising! Among the three cars, the Volkswagen Jetta and Skoda Octavia edge ahead when it comes to gearbox smoothness as well, petrol or diesel engine (all models of the three cars come with 6-speed units expect the Octavia 1.8 TSI). In terms of mileage though, the Hyundai Elantra beats both of them and is slightly more frugal. 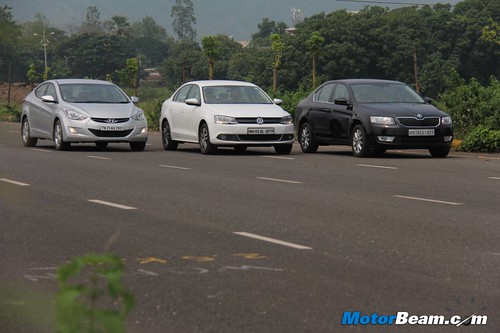 In the performance department, it’s an easy win for the Skoda Octavia. Being lighter with more power and torque on tap, the Octavia simply edges ahead and blows of the other two when it comes to city drivability or highway cruising. However we haven’t even talked about the best engine on the Octavia yet. Skoda has also offered the 1.8-litre TSI powerplant on the Octavia which belts out an impressive 180 PS of power and 250 Nm of torque. This engine is mated to a 7-speed DSG transmission and there is simply nothing which can match it in terms of sheer fun.

Driving Dynamics – There is a world of a difference between the Hyundai Elantra and the European offerings. The Elantra is one of the best Hyundai cars when it comes to dynamics but it is no where near the Octavia and Jetta when it comes to ride and handling. The Hyundai’s soft suspension gives it a good low speed ride but at high speeds, the vehicle isn’t as comfortable over bad roads as the other two. Although the Elantra does feel reasonably stable at high speeds, it doesn’t give the same vault like feeling possessed by the Octavia and Jetta. The steering is extremely light which makes it a boon to drive the Elantra in congested city traffic but the unit lacks feel at high speeds. The Octavia and Jetta also offer better brakes than the Elantra, with better pedal feel and quicker stopping power. 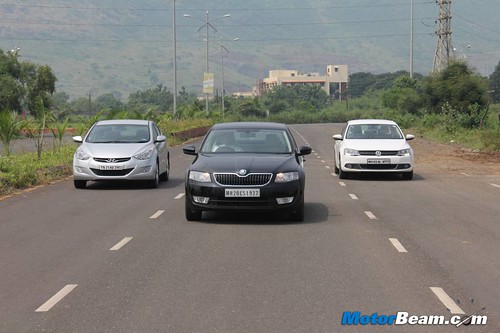 Between the Octavia and Jetta, it isn’t easy to decide a winner because Skoda has equipped the 1.4 TSI and 2.0 TDI with cheaper torsion beam suspension at the rear, shocking at this price point. The Jetta gets multi-link rear suspension which is offered on the 1.8-litre TSI powered Octavia. So the Octavia 1.8 TSI is the best handling car but with the torsion beam in other variants, the noise levels from the rear are considerably higher. Both cars offer terrific amount of grip through corners and are glued to the road at high speeds. Steering feedback is excellent too but overall we would pick the Skoda Octavia for being a more involving car to drive, but only just. 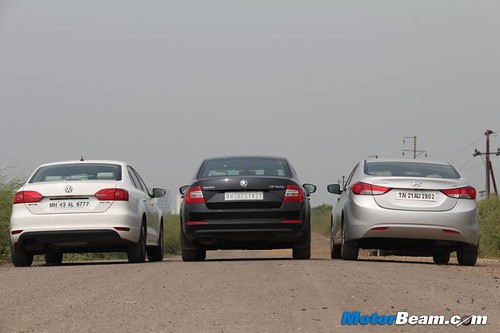 Verdict – These three cars are very capable machines which makes the verdict all that difficult. The Volkswagen Jetta carries all the solid points you expect from an European car but it falls a bit short on desirability. This makes the competition to the top solely between the Elantra and the Octavia. The Hyundai Elantra offers more bang for your buck (price difference between the top-end variants of the Elantra and Octavia is Rs. 3.6 lakhs), with even the base variants being equipped generously. For most buyers who care about value, mileage, features, after sales service and appeal, the Elantra is more than up to the task and will please them thoroughly. However those who want a complete all-round package and are ready to shell out the extra amount, the Skoda Octavia is the clear winner of this shootout.

Where the Elanta scores heavily is appeal and value while the Jetta is now overshadowed by the Octavia. The Hyundai Elantra and Skoda Octavia are almost neck to neck but the latter nudges ahead by offering better performance and dynamics. 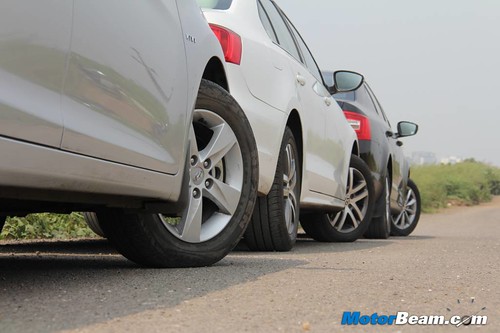