The AWD system in the Duster further boosts its appeal, it’s quite capable off the road now

Renault was an unknown entity in India till the Duster was launched, a car which has made the French automaker a household name. The Duster’s success can be attributed to various reasons including its macho appearance, frugal engines, generous space and an attractive price at launch. The Duster became so popular in India that it became the top selling SUV in the country for quite a few months, displacing the bigger looking Mahindra Scorpio. With competition in the segment intensifying, the Duster’s sales haven’t continued to be segment leading although it’s by far the best selling car for Renault in India. To further boost the appeal of the Duster and attract a new segment of buyers, Renault is now launching the AWD Duster. The car also gets multiple changes along with the capable 4-wheel drive system, we put it through a rough off-road course to gauge its performance. 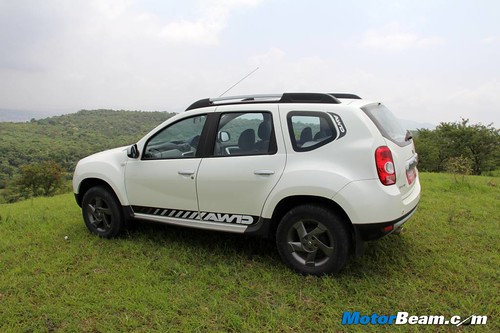 AWD stickers instantly distinguish this Duster, notice the darker finish on the wheels

Exteriors – The Duster has always carried an SUV body language even though it’s a compact model. The design remains completely unchanged on the AWD version but Renault has given some minor changes to differentiate the vehicle from its front-wheel drive only sibling. The headlight gets the blackened treatment while the alloys get a grey finish, both of them look good. Renault has also pasted AMG logo inspired AWD stickers on the side (on the lower sides of the door and on the C-pillar). The car also gets the blackened treatment for the B-pillars. The rear right gets the 4×4 badge and overall the changes are too minor to have any sort of impact. Instead, Renault should have brought in the AWD model with the facelift of the car which has already gone on sale the world over. 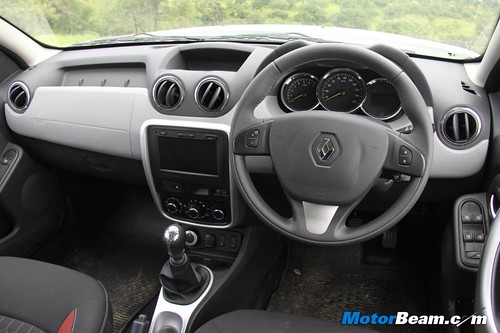 A new 3-spoke steering debuts on the car, it also gets a touch-screen system

Interiors – The Duster AWD also gets an updated interior. While the layout of the dashboard remains the same as before, the car gets a new 3-spoke steering wheel which has cruise control buttons on it but audio controls are still stalk mounted. The instrument cluster now features three pods which have a thick chrome surround. The multi-information display also shows instantaneous fuel mileage along with other useful information like range, consumption, etc. The dashboard is finished in nice dual-tone colours of grey and black while the seats are finished in a grey and red combo. Some plastics are softer to touch but overall quality isn’t befitting a car which costs upwards of Rs. 15 lakhs. Placement of some switches continue to be flawed like the rearview mirror adjustment button.

The centre console sees a slight change in button layout, instead of two lock and unlock buttons, there is just one button. The hazard light switch is smaller while the touch-screen infortainment system offers Navigation and Maps along with the usual Media functions and Bluetooth connectivity. The touch-screen system has a bit of a lag, it can take more than a second to respond at times. Rest of the cabin remains the same, so you get generous space for five people with legroom not being an issue. Boot space is also large so luggage carrying capacity is good when you head off the road with tents stuffed in the trunk. 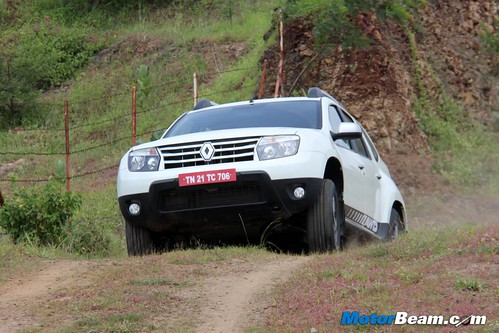 The Duster uses the same 1.5-litre diesel engine but the AWD model is heavier

Performance – The Renault Duster AWD is powered by the same 1.5-litre k9k diesel engine with the higher state of tune. This means it outputs 110 PS of power at 3900 RPM and 248 Nm of torque at 2250 RPM, paired to a 6-speed gearbox. Although punchy, we all remember this engine to have a lot of lag which hampers city drivability, this is bound to be a hitch when you go off-road. However, Renault has tweaked the ECU to improve low-end poke and that does show. The Duster AWD doesn’t feel bogged down at lower RPM and one doesn’t have to wait till eternity for the turbocharger to kick in and work its magic. Power delivery is quicker now and there seems to be less of a top-end rush but the compromise is well worth it. 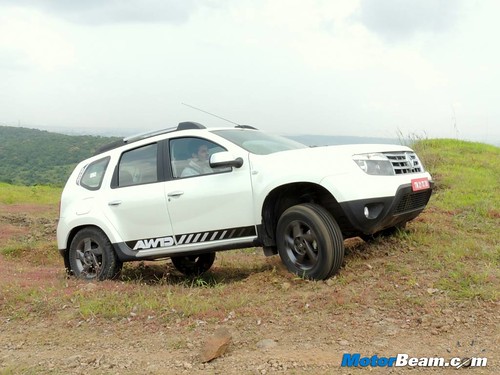 The 110 PS motor packs in quite a punch, low-end response is better now

Mid-range of the Duster AWD is very good and this is a car which can gather pace quickly ensuring you never have to worry while overtaking slow moving traffic. With the improved low-end response, overtaking is a breeze as a downshift isn’t always warranted. Another problem with the 110 PS Duster was the heavy clutch and the same has been resolved on the AWD model. The clutch is much lighter than before which means driving in stop-go traffic isn’t a tiring task. Renault states the ARAI figure of the Duster AWD to be 19.72 km/l (during our drive the display read 6.1 km/l but we were off-roading and revving hard in first gear), the lesser mileage is due to the increase in weight. 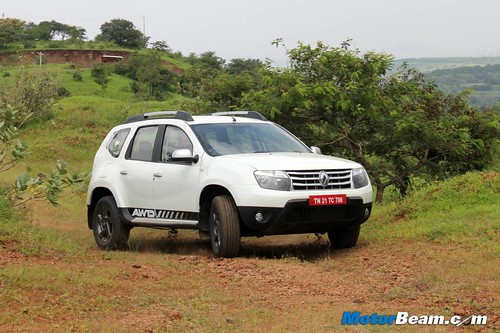 The Duster has a terrific ride and handling balance, it’s surefooted at all times

Driving Dynamics – We have always liked the Duster for its balance of ride and handling. The AWD model gets independent suspension at the rear and that further improves the already good ride quality of the car. There is less of thuds over potholes and the Duster can tackle the worst of terrain without completely shaking passengers. The handling is good too, the Duster drives like a car, body control is good and it’s very chuck-able into corners with no hint of letting go. The steering offers good feel but can get a bit too feedback rich when you are cornering hard and you hit a rough patch as vibrations are felt on the wheel. The brakes work well and offer surefooted stopping power. 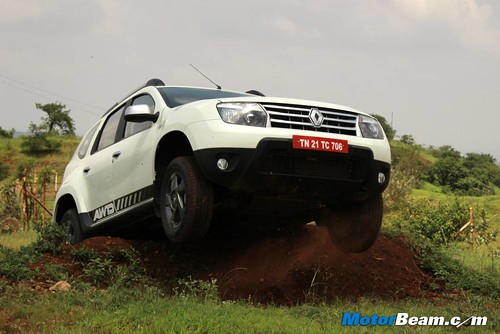 A hugely capable machine, the Duster can tread the less beaten path without any fuss

The Duster AWD is quite a capable vehicle for a compact SUV, it can do quite a bit off the road

Off-Road Ability – The Duster AWD gets a knob on the centre console with three modes – 2WD, Auto, Lock. 2WD keeps the Duster in front-wheel drive while in Auto the car channels power to the rear wheels when the front wheels start to lose traction. In Lock mode, the Duster remains in 4-wheel drive till 60 km/hr post which it shifts back to front-wheel drive automatically. The Duster AWD also gets hill hold and traction control systems, all of these helping in off-roading. With a ground clearance of 205 mm (good 30 degree approach and 35 degree departure angles), this Renault was able to go through all kinds of terrains we threw at it. Some hurdles required us to reverse and gain momentum but the car was always ready for the next challenge. Obviously it isn’t a hardcore off-roader and thus it’s best put to mild off-roading activities, not intense ones which require a real SUV. 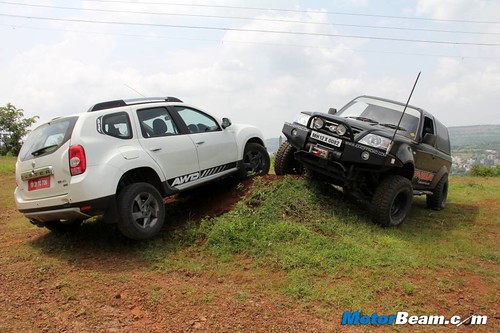 Verdict – Off-roading isn’t a very popular activity in India but the trend is catching up with more and more people now wanting to engage in a slush fest. The Renault Duster AWD is able to give the best of both worlds, it can do quite a bit off the tarmac while also being fantastic on the road. With demand for 4×4 vehicles very low, the Duster is going to appeal to a very limited set of buyers but the other changes amplify the package further. To be priced close to a lakh more than the 2WD model, the top-end Duster will cost upwards of Rs. 15 lakhs, making it quite expensive. Our only grouse being, the Duster still doesn’t feel worth the price tag and with cars costing lesser than the Duster boasting of much better interiors (in terms of design and quality), we simply can’t understand why the AWD model hasn’t come in the facelifted avatar.

The Duster AWD further accentuates the appeal of this budget Renault but the pricing is quite high and the interiors simply don’t match ones’ expectations from a car of this price, the feel good factor is missing when you are driving this vehicle. 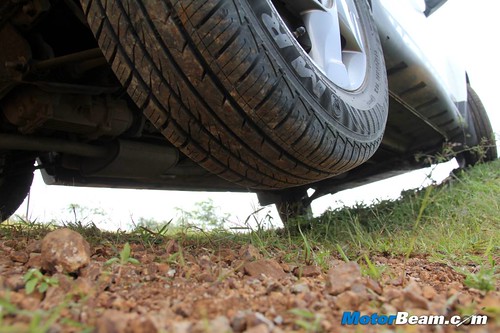 News highlights of the day include Hyundai, Mercedes, Toyota and Volkswagen. Hyundai Kona - Prices of the Hyundai Kona have been increased by   END_OF_DOCUMENT_TOKEN_TO_BE_REPLACED

A person in Rajasthan has modified his Premier 118NE to look like a Rolls-Royce Phantom Drophead. Catch All The Latest Videos, Subscribe To   END_OF_DOCUMENT_TOKEN_TO_BE_REPLACED

The upcoming Benelli 600RR has been spied in production-ready form. Benelli had discontinued the Tornado 1130 in 2014 and quit the sports bike   END_OF_DOCUMENT_TOKEN_TO_BE_REPLACED