The 1.5 TDI with DSG autobox not only makes the Rapid quick but also very frugal

One of the early entrants in the Indian car market, Skoda Auto hasn’t been able to churn out volumes in the country in spite of having some very good products on offer. The Czech automaker got overshadowed by Volkswagen post the entry of the Wolfsburg manufacturer who is also the parent company of Skoda. After not getting volumes with the Fabia, Skoda tried its best with the Rapid, it’s current best seller in India, having sold 1027 units last month. Skoda has no plans to launch the new Fabia in India which means the Rapid will be the only car in the volume space for the company. To boost the appeal of the Rapid and increase sales, Skoda has given the car a DSG automatic transmission on the diesel version. The engine is also new and is claimed to be more frugal. Does the diesel automatic option on the Rapid really boost its proposition, we drive and find out.

Exteriors – The only striking change to the Skoda Rapid with the new diesel engine are the alloy wheels (which are minutely different than before and all variants now come with 15-inch wheels with lower trims getting steel rims). Skoda hasn’t made any other change on the design front which is disappointing as the Rapid has started to feel dated now and is the only Skoda car whose styling doesn’t gel with the rest of the family design. Skoda is offering a Black package with the Rapid which is offered on the top-end Elegance variant (three variants are offered with the DSG, the other two being Ambition and Ambition Plus). This package (which is an OEM fitment) is priced at roughly Rs. 20,000/- and comprises of headlights, foglight surrounds, grille, rearview mirrors and wheels being blackened. One can also opt for a blackened roof and side graphics (at dealer level), all this does make the Rapid look sporty but the blackened treatment should have been standard and not optional. A new toffee brown colour has been introduced, it will be available from October. 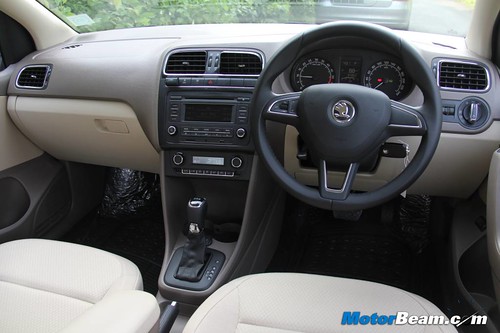 Interiors – Skoda hasn’t made many changes to the interiors of the Rapid and the car continues with the same dashboard which means the Volkswagen influence is evident while the 3-spoke Skoda steering with silver inserts is really nice to hold. The brown and beige dual-tone finish in the cabin gives it an airy feel and there are good storage spaces too. Quality of the cabin is very good, there is nothing to fault with the build quality and the solid feeling adds to the appeal of driving a Skoda car. If you do look closely, you will notice some sort of cost cutting (some exposed wires and metal) but nothing is glaringly evident. Skoda has made driver side airbag standard on all variants while the instrument cluster’s multi-information display gets new fonts for easier reading (identical to the updated Polo).

Skoda has added features on the Rapid including cruise control and rear parking sensors, there is a card holder too

Space inside the cabin is generous although it’s still not in the same league as the Nissan Sunny or the Honda City. Still two people can find reasonable comfort at the rear while the third passenger is not so welcome due to the centre hump. Skoda has for mysterious reasons removed the ‘Ergolever’ with which one could control the front passenger seat position (to boost legroom from at the rear without having to come to the front seat to do it). The Rapid also gets cruise control system (on the left stalk) and rear parking sensors on the Ambition Plus trim onwards. There are more buttons below the centre AC vents including a not so nicely integrated card holder. A new app is available which let’s you control the audio system using your iOS or Android device, thereby acting as a remote. 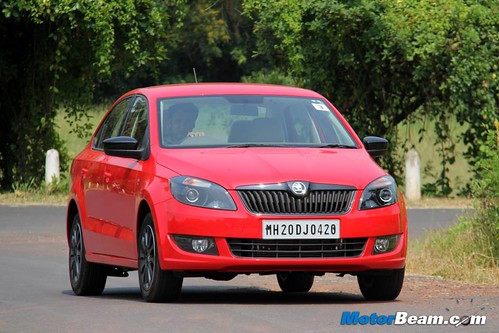 Performance – The big change to the Skoda Rapid lies in the powerplant. The 1.6-litre TDI diesel engine has been downsized to 1.5-litres thanks to a reduction in the bore of the motor. However, Volkswagen has managed to keep output numbers the same as before. Thus the Rapid 1.5 TDI outputs the same 105 PS of power at 4400 RPM and 250 Nm of torque between 1500-2500 RPM. The 1498cc mill addresses one of the big grouses of the old car but only to some extent. Low-end response is much better than before although turbolag is still evident but of much less of a bother. 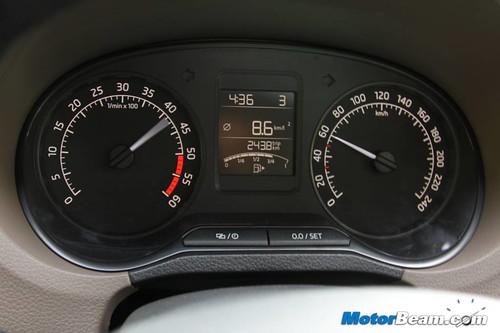 The 1.5 TDI engine in the Rapid gives it much better drivability with a fantastic low and mid-range punch

Once the turbo kicks in all its glory, the Rapid diesel takes off with a sudden jerk and that can rob away smoothness when you are new to the car, you do get used to it with time. Mid-range of the motor is very strong, it does pull with zest between 1800-3000 RPM and that makes overtaking a breeze. The reduction in 100cc has affected the top-end rush of the mill and it doesn’t rev as quickly as before, redline comes in at 4700 RPM (4900 RPM in tiptronic mode). Refinement levels have improved compared to earlier but there is still the diesel clatter at idle and the oil burner makes it presence felt once you whizz past 3000 RPM. Skoda is offering two gearboxes for the Rapid diesel – a 5-speed manual and a 7-speed DSG, the latter being of huge importance for the success of the updated model. 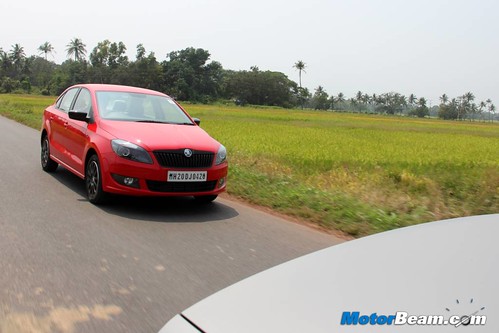 Although improvements in NVH, refinement levels could have been better

The automatic gearbox in the diesel Skoda Rapid is the DQ200 unit which also does duty in the Vento TSI and Polo GT TSI (the automatic DSG box in the Octavia and Superb are 6-speed ones). The dual clutch box uses a dry clutch plate and the extra gear and lower weight (20 kgs less than the manual gearbox) makes it more efficient than the manual version. Skoda claims an ARAI mileage of 21.6 km/l for the DSG Rapid while the manual version is rated at 21.14 km/l (Rapid 1.6 TDI returned 20.5 km/l). The DSG gearbox has two driving modes – D and S, the former offering good shifts when you drive sedately but lacks urgency when you step on the gas, while the latter making up for the slow shifts by showing urgency and holding gears till the redline. The DSG transmission is a gem and is able to find the right gear for you all the time, shifting effortlessly without any fuss. Cog swapping happens quickly with precision and there is no signs of the gearbox working.

Driving Dynamics – There are no changes to the suspension of the Skoda Rapid and its dynamics are the same as before. The balance between ride and handling is excellent and the entry-level Skoda is very stable at speed (it also gets ESP and hill hold assist), being glued to the road at all times. The low speed ride is very good but the Rapid can’t deal with big potholes as those do unsettle the car and reveals the slight stiffness of the vehicle. The steering is accurate but isn’t the sharpest around, lacking in feel at high speeds. Braking performance is good and ABS is offered as standard on most variants. Still for most people, the balance is fantastic and makes the Rapid a very engaging car to drive. 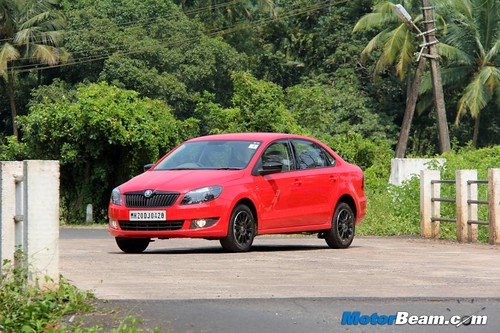 For those who want the convenience of an automatic, the diesel Rapid is a good choice

Verdict – The Skoda Rapid has always been a value for money package as it is one of the cheapest European sedans you can buy in our country. However amidst intense competition (even from its sibling) and poor after sales service, the Rapid hasn’t been able to see an increment in sales. As a product, the Rapid has always been good and although the styling has started to wear off, this car is still very nice to drive. With the state of the art DSG automatic now offered on the vehicle, the Rapid diesel will definitely appeal to those who like to drive effortless. Sure the automatic version costs a good Rs. 1 lakh more but if convenience rocks your boat (the icing on the cake being no compromise in fuel efficiency), the Rapid DSG automatic is an excellent choice in the segment.

The Skoda Rapid is now a more appealing car with that optional Black Package while the new 1.5-litre diesel engine improves real world performance. The 7-seed DSG automatic gearbox in the Rapid is proof that you can have fun without compromising on efficiency. 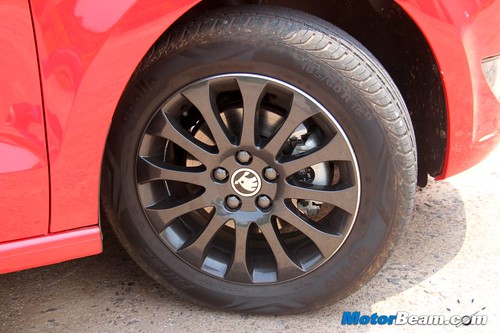 * Styling not in line with family design language
* After sales service