The TVS Star City+ gets thoroughly changed for a new beginning in the 110cc segment.

Manufacturers love to reply to each other around the globe. It is nothing different here in India as well. Everybody loves volumes and volumes are generated from 100-125cc motorcycles in our country. All of this started with Hero bringing in the Splendor and then as they say, the rest is history. Now there are new players in the market and old players are trying hard not to lose their market share. TVS is a manufacturer in the race where volumes and market position is key. 110cc motorcycles are gaining popularity with the mileage and power combination they offer. Bajaj Auto is doing it with the 100cc 4-valve engine while the rest are still playing the displacement game. The new entrant is the TVS Star City+. A motorcycle which is based on the Phoenix platform inside-out but has so many changes to it in the interest of keeping this category of consumers happy that TVS called us to measure the differences at their race track at their plant in Hosur. We do not deny any race track invitation so we quickly packed our bags and headed down south to experience the motorcycle in its natural habitat and put it through its paces to find out if the Star City ‘+’ gets A+ or not.

Motor Quest: The TVS Star City is a popular name in the Indian commuter motorcycling space, which has achieved a lot over the years. The bike has been praised for durability, quality and low maintenance which is key to compete with its nearest competitors. 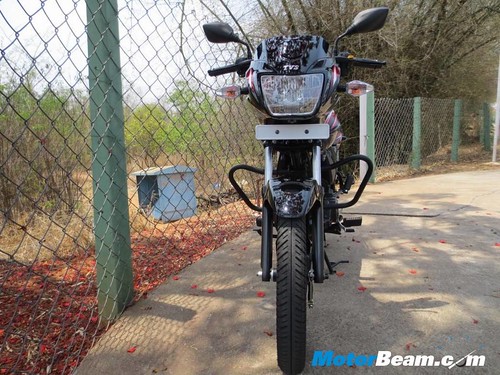 Styling – The Star City was the contemporary looking motorcycle as always but the Star City+ here looks inspired from the last commuter which TVS launched, the Phoenix 125, which ended up being inspired from the Apache. The front headlight cowl is the most dominating part as well as the most instantly recognisable part, but now, it has a squarish headlamp instead of the protruding one seen on the Phoenix 125. The swooping side panels with graphics and the rear tail piece assembly also ends up looking like the modified version of the Apache too. However, it has been made contemporary to suit the needs of the consumer of the 100/110cc segment. The TVS badge on the crankcase on both sides, the white springs with dark body colours makes it grab all the attention. The efforts behind the design have been put together well and that is all we can say to conclude the design. 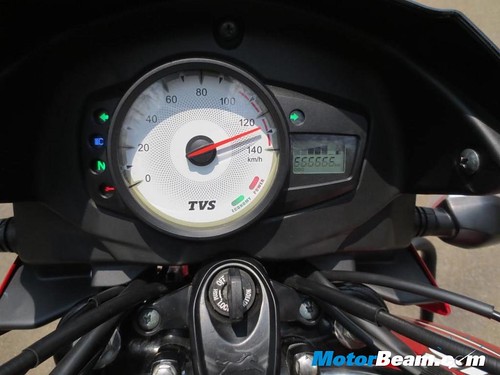 Instrument Cluster and Switch Gear – A 90% analog, 10% digital instrument cluster makes its way to the Star City+. The usual tell-tale lights such as high beam, neutral and service indicator make it to the bike. The dedicated turn indicators are always a sign of attention to detail and lack of cost-cutting. The speedometer, which looks like a tachometer at first glance, is inspired from the Apache and has Power and Economy modes embedded into them. First seen on the Jupiter from TVS, the company says it does help a lot and trust us, it certainly does. The digital meter shows fuel gauge and odometer. An idea taken from the leader of this segment, the Hero Passion/xPro. Switchgear comes with a pass light. The palm grips and switchgear ooze quality. 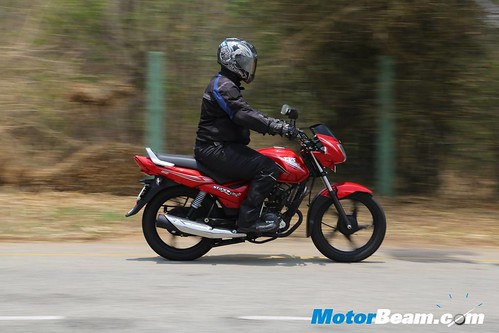 Ergonomics – The seating position of the Star City+ is upright and the foot pegs are front set. The narrow yet wide handlebar gives the rider confidence for easy manoeuvring in our mad city traffic. The rear view mirrors give an excellent view of what is behind. The seat is wide and long and the seat cushioning is excellent. TVS has used special foam to make things a lot better for long journeys and after riding for 2-3 hours continuously, we are delighted to report it works like a charm. 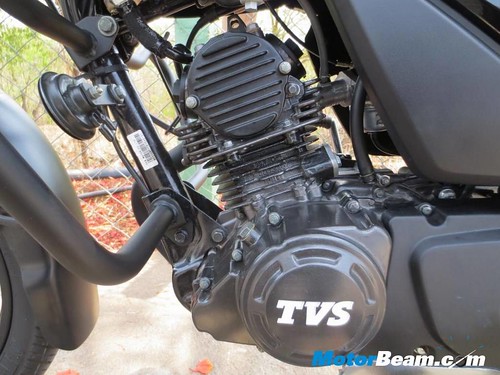 Performance – The time has come when 100/110cc bike do not lose on power. Earlier these engines produced not more than 7 BHP of power but now everybody is reaching the number 9 when it comes to BHP. Bajaj Discover effect? Most probably! Powering the Star City+ is an all new 109.7cc engine. The over-square motor produces 8.3 BHP of power at 7000 RPM and 8.7 Nm of torque at 5000 RPM. The engine has linear power delivery and is very smooth throughout the rev range and ends up sounding softer when compared to the electrifying Phoenix 125.

The mill has very good low and mid-end punch and pulls strongly with power trailing off after maxing out at 85 km/hr. The gearing on the 4-speed gearbox is on the taller side. The engine is a part of Eco-Thrust family of engines. Don’t get me wrong, this engine is just not a lift from the Phoenix and has been detuned. There are so many changes to the engine that it is unbelievable. Already the Eco-Thrust engine was a gem on the Phoenix. TVS says all these efforts have be done because the customer of this segment has particular demands, which need to be fulfilled. 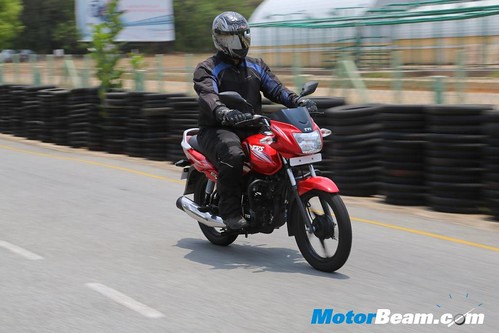 For example, TVS has made sure that you do not feel the heat from the crankcase area on the feet even if the bike has been running all day long. Cold has been directed towards the area to make sure it does not happen. Moly coated piston has now become industry standard and it makes its way on the Star City+ for maximum reliability. Fuel consumption has been minimised by using series type charger which draws less energy from the magneto (which rotates with the crankshaft) to save that 10% of extra fuel being burned for no reason.

Knocking in higher gears at lower speeds is obvious but TVS has introduced step-less ignition for optimised combustion and crank rotations to make the engine devoid of this old practice. Does it work? Yes, 20 km/hr and fourth gear and no knocking whatsoever. Other changes include a projected spark plug, a bigger air filter, carburettor and optimised intake port for smoother power delivery throughout the rev range. Higher capacity bearings and clutch plates are used to make sure everything works in tandem with the changes made to every other department.

Dynamics – Armed with a single down tube frame and stiff suspension on both ends, the Star City+ rides and handles well. The right balance of handling was seen on the TVS racetrack. There was a bumpy corner, a long sweeper and a big straight (big for a commuter). The long wheelbase and compact dimensions aid in quick change of direction while also offering excellent stability and ride quality at the same time. The Star City+ feels very planted at high speeds and takes sweepers with confidence. At the ride, all the journalists had same speeds at the straight and the same speed was carried throughout the long sweeper. As you can make out now, the bike has been taken to its peak during testing and hence this is the outcome. Braking is good at the front compared to other bikes in the segment but still work needs to be done or just offering a disc brake would be a great idea. Rear brakes are prominently used in these bikes and it performs very well. TVS made sure tyres were good, they give good confidence while riding enthusiastically and they have achieved this with the new tyres developed in-house. Track riding often requires excellent tyres and the new tyres did not disappoint like the old ones seen on other TVS motorcycles and scooters. 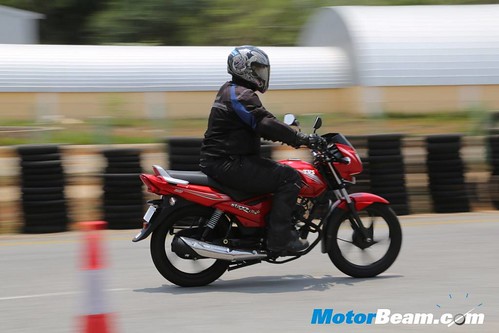 Verdict – TVS has a reputation for making reliable products without compromising on any aspect of the motorcycle, let it be styling or features. The 110cc segment is surely getting crowded day by day but as a consumer, you do have priorities set. Nearest dealership and service centre, cost of purchase, styling etc. TVS has made sure of everything and it is a rare sight that anything has gone wrong over the years. If the Star City+ fits your needs then you cannot go wrong with it. It’s a fresh addition to the crowded entry-level segment and this TVS holds its own.

If the combination of reliability and uniqueness are your primary concerns and the Star City+ fits in your budget, just go ahead and get it because there is no other bike which scores highly on those parameters. 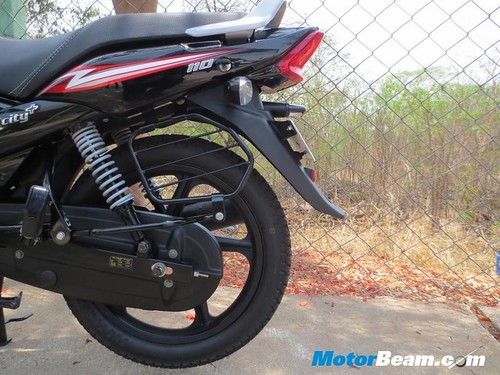 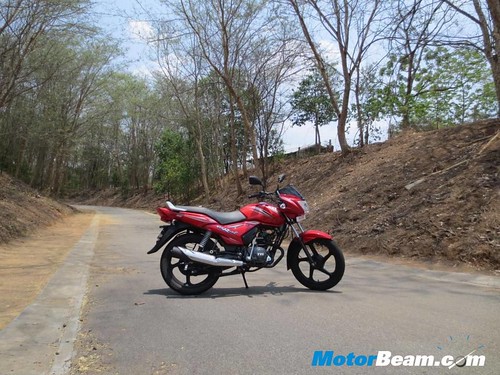