The Avventura makes a compelling case for itself, it’s desirable and dynamically potent

It is that point of time when SUVs and compact SUVs are bringing in sales like no other segment of vehicles. There is no denying the fact that we Indians love SUVs for their imposing presence and massive size. Some people feel that owning an SUV makes them superior to those having little hatchbacks or sedans while some buy SUVs just for their butch looks. While everyone cannot afford true big SUVs, our market has options in every size – the Ford EcoSport, Renault Duster and the likes are preferred by those who want something compact but yet an SUV. And now comes another breed – hatchbacks transformed into SUVs, i.e. hatchback crossovers. Volkswagen launched the Cross Polo while Toyota came up with the Etios Cross. Fiat too has joined the bandwagon by coming up with a hugely modified Punto Evo and that’s how the Avventura crossover was born.

Motor Quest: The Avventura is based on the Punto Evo but it carries many modifications to make it look and feel more rugged and robust. However, it shares its powertrains with its younger sibling.

Whether you like it or not, the Fiat Avventura is a looker. It is a great attention-catcher on our roads

Exteriors – Any layman can figure out that the Avventura is based on the Punto Evo. Fiat has made a lot of cosmetic changes to the Punto to come up with this vehicle. First up, the entire front bumper assembly is new. It features a rugged design and comes with a silver cladding at the bottom that can come useful while tackling bad roads full of stones and rocks. From the side too, the Avventura looks like a Punto on stilts thanks to the high ground clearance of 205 mm and the thick black body cladding running all around the vehicle. 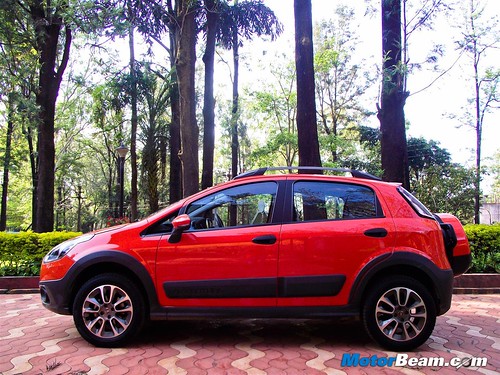 The spare wheel has been mounted on the tail gate but Fiat has incorporated the use of a unique spare wheel holding mechanism that is attached to a part of the rear bumper. Press the boot release button on the dashboard (or key) and the spare wheel pops out. But it is not as simple as it sounds. The spare wheel cover has a lever which you need to press and pull out the wheel mechanism and only then can the hatch be completely opened. The same thing has to be followed while closing it too, push the hatch down, press the lever and give the spare wheel a tight push so that it locks into its place with a thud. 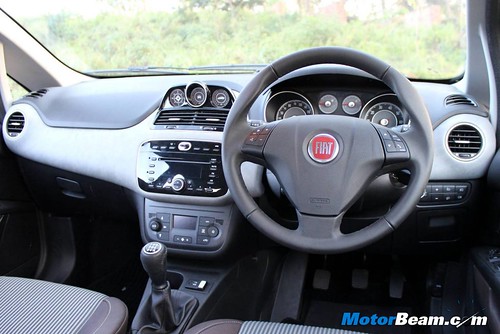 Interiors – Open the door and step inside and you instantly notice that the interiors are carried forward from the Punto Evo too. The dashboard features a dual-tone colour scheme which is different than the Punto though. Other major components like the steering wheel, instrument cluster, door panels and seats are right out of the Punto. To distinguish the Avventura from its hatchback sibling, Fiat has added a cool cluster at the top of the centre console and it houses three gauges – compass, forward-backward incline and right-left incline. The incline meters show a maximum of 40 degrees for both the sides and when we tested them out, they seemed to be pretty accurate. 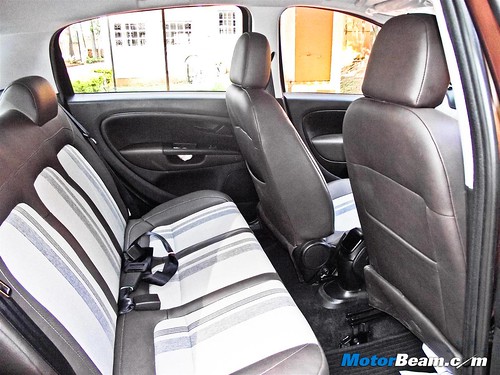 Minimum and maximum legroom at the rear, tall people might face headroom issues

The Fiat Avventura might look imposing from the outside, but inside it has just adequate space

When you get into the driver’s seat, you notice that even though the seat offers decent support, the cushioning is pretty firm and so it did get slightly uncomfortable over a long 200 kms drive. The seat was height adjustable and it had a good movement range so finding a good driving position was not too difficult. The steering wheel felt good to hold and the gear lever was within easy reach. The dashboard and many other panels have hard plastics though. As usual, Fiat has messed up some ergonomics in this vehicle too. 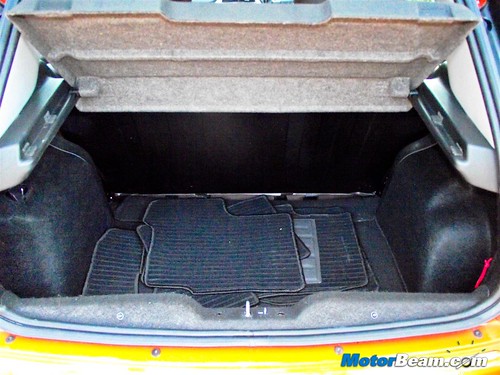 With the deletion of the spare wheel, a lot of space has been freed up below

Space at the rear is decent but it could be a bit of a problem if two tall people sit at the front and rear simultaneously. There is no centre armrest and Fiat has a provided a single rear AC vent only on the Emotion variant. The AC performs well and the automatic climate control managed to keep things pretty cool. The Punto Evo has a boot space of 280-litre and the Avventura has similar space but the removal of the spare wheel has freed up some more space underneath which has been utilised to keep the tools. 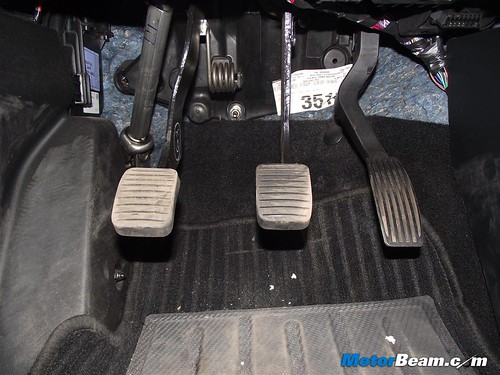 The dead pedal is too close to the clutch, causing some discomfort while shifting gears

At first, it was good to see the dead pedal in the Fiat Avventura and just 15 minutes after driving it in traffic, we realised how it was more of a problem. The clutch and dead pedals are placed very close to each other so don’t get surprised if you find the left half of your foot touching the deal pedal while pressing the clutch. Even while driving on the highway when I wanted to rest my foot on the dead pedal, it felt a bit difficult to reach and the clutch pedal kept getting depressed slightly. In stop-go traffic as well as fast gear shifting, the Avventura is not going to give much of pleasure thanks to this placement of pedals. 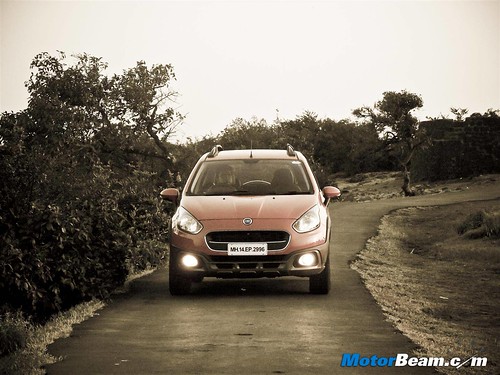 The Avventura gets the same engines as the Punto Evo, 1.4-litre petrol and 1.3-litre diesel

Performance – The Fiat Avventura crossover is available with two engines straight from the Punto Evo. The petrol engine is a 1.4-litre FIRE naturally aspirated unit that churns out 90 PS of power of 115 Nm of torque. The engine offers decent power that makes the Avventura easy to drive around in the city as well as on the highway. Low-end power is okay but some amount of torque is surely missed while taking the vehicle up on inclines. Acceleration in the mid-range is again pretty good and the engine doesn’t mind being revved all the way to 6000 RPM. We could reach the ton mark very easily on the highway and the vehicle tops out at 170 km/hr post which the speedo needle doesn’t seem to move forward. Fiat and ARAI claim that the Avventura petrol gives a fuel efficiency of 14.4 km/l but we managed to get only about 11.2 km/l while driving sedately in the city and around 9.5 km/l while ripping it on the highway. Of course, driving at a constant 80 km/hr in fifth gear (2500 RPM) will give a much better figure here. 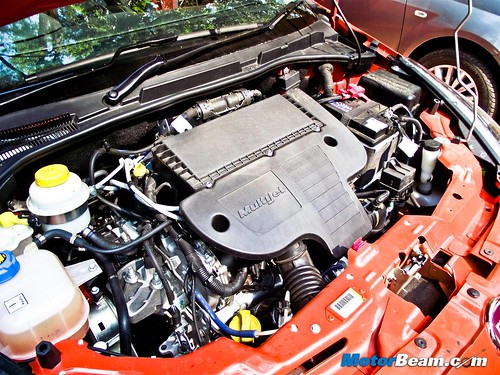 The diesel variants come with the famed national engine – the 1.3-litre Multijet unit that gives out 93 PS of power and 209 Nm of torque. This engine comes with a Variable Geometry Timing (VGT) while the 75 PS tune on the Punto gets Fixed Geometry Timing (FGT). The power is just satisfactory while the torque is decent and very useful in uphill climbs. The turbo starts to trickle in at around 1900 RPM but the true power surge can be felt post 2200 RPM. It pulls the vehicle cleanly and again we had no problems in touching speeds way above the ton. The diesel Avventura is said to give a fuel efficiency of 20.5 km/l as per ARAI but we managed to extract 12-13 km/l in the city and around 13.5 km/l on the highway with some aggressive driving. Again, a sedate driving mannerism would give out much better figures.

Driving Dynamics – This is one section where Fiat manages to come out right at the top. We will talk about the steering wheel first. The steering offers some really good feedback whether you are driving on broken roads or on a smooth stretch of tarmac. It is also precise while turning and the Avventura has some really good handling capabilities. Tackling the twisties in Lonavala got a big grin on my face. The vehicle feels confident even while taking corners at decently high speeds. There was not even a single instant where we thought that the Avventura would go out of control or slip its rear out. Braking is very good in the Avventura and we have nothing to complain on this front. 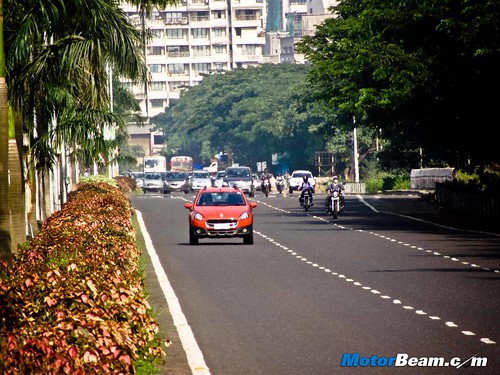 While driving straight at speeds above the 150 km/hr mark, the vehicle feels really planted and stable and it inspires a lot of confidence. Apart from handling, the ride quality too is excellent. It tackles both good as well as really bad roads with great ease. Minor potholes go unnoticed and huge craters too do not affect the overall composure of the vehicle. In the Avventura we just whizzed past some stretches with utmost ease while we had to slow down in other vehicles on the same stretches. Sure, the Avventura has a huge ground clearance of 205 mm that helps in gliding over bad roads. With the increased height, we were expecting some amount of body roll but Fiat has negated that with the addition of an anti-roll bar at the rear, which means that the ride and handling are pretty much as good as the Punto Evo. 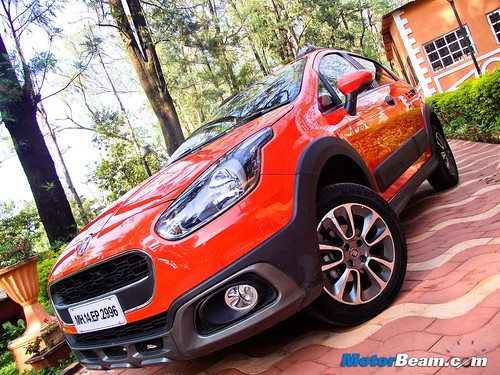 Only diesel variants get ABS and airbags, Fiat should offer it on petrol too

Safety and After Sales Service – The Fiat Avventura is available in three variants – Active, Dynamic and Emotion. The Active variant does not get airbags or ABS while the Dynamic variant gets ABS which is available only if you buy a diesel model. Yes, you read it right, ABS is available only on the Dynamic diesel variant. The top most variant is the Emotion and it comes with dual airbags, ABS, 3-point ELR seat belts with pre-tensioners and height adjustable front seat belts. We have no idea what was Fiat thinking when they decided to make only the diesel engine available with the top Emotion variant. It means that petrol vehicle buyers don’t get any safety features at all.

At a time when other manufacturers have started to offer airbags as standard even on base variants of their hatchbacks, this comes as a really surprising move by Fiat. When they claim that a vehicle is designed for long distance travelling, why cannot they offer safety features at least as an option? After parting ways with Tata Motors, Fiat has been busy setting up its own service network. While the number of service stations are quite low at present, the company is making sure to increase its base across the country. 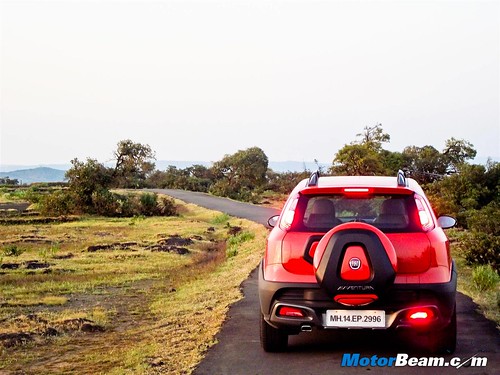 Verdict – We can now safely say that the Fiat Avventura is more of a crossover than the offerings from Volkswagen and Toyota, it leaves its competition like the Etios Cross and Cross Polo far behind. The latter two are just pseudo crossovers with cosmetic changes to the respective hatchbacks while the Avventura also comes with some mechanical changes. The vehicle drives well, has some well sorted dynamics and features solid build quality but it is let down by some issues like messed up ergonomics, small network of service stations and slightly average fuel efficiency. All in all, we conclude this review by saying that the Avventura is one of the best crossovers in this price range and it might just be able to turn around Fiat’s fortunes in India. Now all Fiat needs to do is come up with an aggressive marketing campaign and they should be good to go.

The Fiat Avventura is one vehicle that really appeals to the heart. It looks beautiful and drives well. Fiat doesn’t sell as many vehicles as its rivals and the Avventura might just be able to turn around the tables for the company. 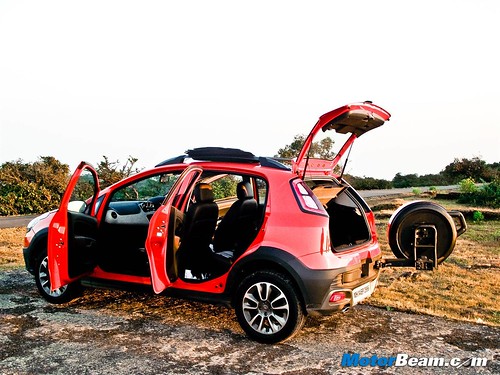 * No safety features for petrol variants 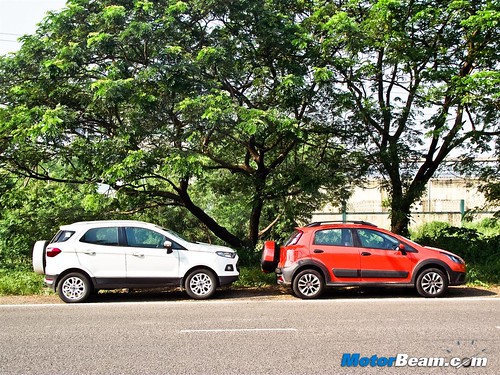 Is Fiat Avventura The Best Hatchback Based Crossover?

Fiat Avventura Will Be Available In 6 Colours, 5 Variants