The petrol Jaguar XJ 2.0L has good space & comfort along with decent performance

Indians love vehicles that come with an added benefit called snob value or status. The rich businessmen, the local MLA, the national superstar, etc. are just some of the people to whom vehicles like the Jaguar XJ are targeted. This luxo barge from the land of the Queen comes with great looks, eye-catchy road presence and immense luxury and it ticks all the boxes that make it appeal to the non-enthusiast. Now why do we say non-enthusiast? That’s because almost every customer of this sedan buys it just for the comfort and luxury that it offers while only a few owners bother with the driving part. Now you might argue that Jaguar also offers a 5.0-litre supercharged petrol engine but the fact is that hardly anyone even considers that variant of the XJ. So, we took the Jaguar XJ with the 2.0-litre petrol engine for a long drive to see how the 4-pot mill performs in the flagship British sedan. 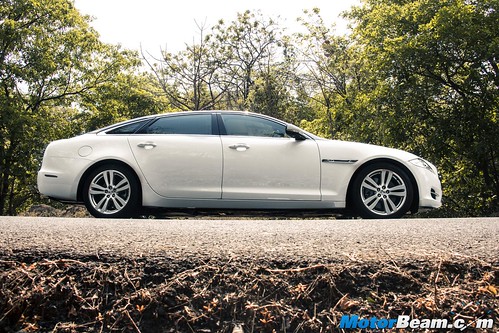 Exteriors – The exteriors of this wild cat are just eye-catching. The front gets a large chrome grille that is visible right from a kilometre away. The headlamps look beautiful with their curves and are quite striking. There are no fog lamps at the bottom of the front bumper and instead there is a chrome slat at either end of the bumper. The air dam is compact and small in size. The alloy wheels carry a simple design and are finished in a shade of silver. The side profile is otherwise pretty much simple and the only styling element at the side is the blackened C-pillar. The rear again doesn’t get any unnecessary creases and the design looks quite classy with stylish tail lamps. While cruising down the wicked streets of Mumbai, the XJ looks like royalty. It has massive road presence and we spotted a lot of people giving a second or even a third glance to the sedan while we drove extra slowly to avoid hitting any craters or speed breakers. The styling of the vehicle has a lot of oomph and you can be sure that wherever you go in the XJ, you will definitely arrive in style. 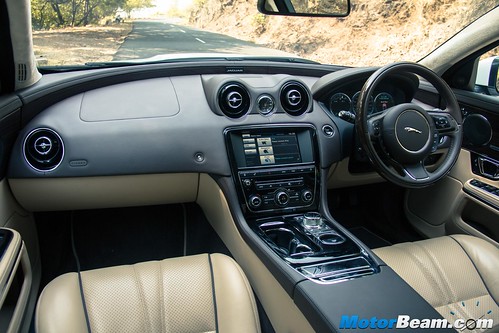 Interiors – As soon as we opened the front door of the barge, there was a feeling of non-satisfaction that seemed to surge across us. Yes, the interiors are luxurious and spacious no doubt, but they still felt a notch below the Mercedes S-Class and Audi A8L. The first thing that you notice after sitting in the driver’s seat is that it is so damn comfortable. The seat gets a lot of adjustment options and with so many options it did take some time to find the perfect driving position. The steering wheel is just the perfect size while the instrument cluster displays all the required information in a way that is easy to the eye. The placement of the centre console is ergonomic and all the controls fall in easy reach of the hand. 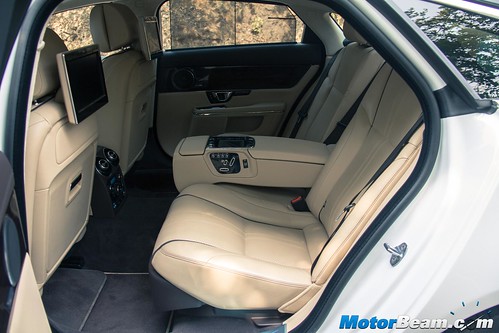 But, if you’re buying this sedan, it is the rear seat where you should ideally be. The rear bench has lots and lots of legroom and again a lot of adjustment options. The rear centre armrest has lots of buttons that allow you to adjust your seat as well as the front passenger seat if there’s no one sitting ahead and you would want to move it forward to free up more space. The seats also come with memory options so if there are multiple people using the car; you wouldn’t need to adjust the seats each and every time. The back of the front passenger seat comes with foldable tables that can be used to place your laptop on while working. The rear also gets two medium-sized screens. 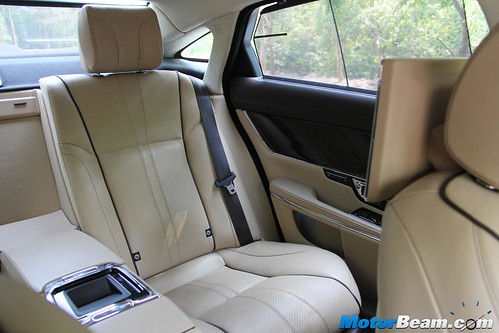 The rear windows come with retractable sunshades which are a great boon in the scorching heat and especially now when the use of sun-films is illegal. The rear windscreen too gets a sunshade which can be opened or closed with the help of a button placed on the roof, at the front. The XJ gets dual panoramic roofs which give an airy feel to the cabin. With so many buttons and switches in the sedan, we found it a bit tricky to get adjusted at first. All the windows are fairly large in size and the front and side visibility is very good. The rear visibility is just below par thanks to the small windscreen and the high-mounted backside of the car. 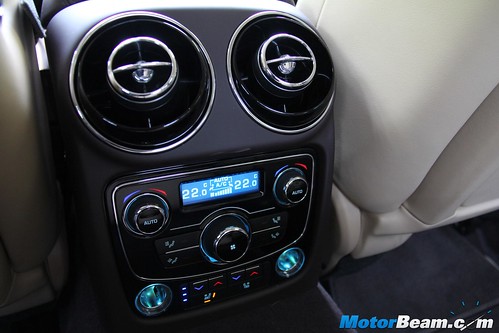 The infotainment system comes with a lot of options and it takes a while to navigate and see everything. The touch interface is decent but Jaguar could have come up with a better user interface and an even more fluid experience considering that we’re in 2015 now. The Jaguar XJ comes with all four massage seats. The screen has settings that allow you to select massage options for a certain seat along with the level of intensity. The rear armrest too has options for toggling the massage function on or off. We must say that this feature works quite well and it was a joy to have a relaxing feeling while chilling at the rear. The vehicle also gets a four-zone climate control which does its job very nicely. The Meridian sound system produces brilliant sound. The overall fit and finish of the interiors is very good but not excellent. 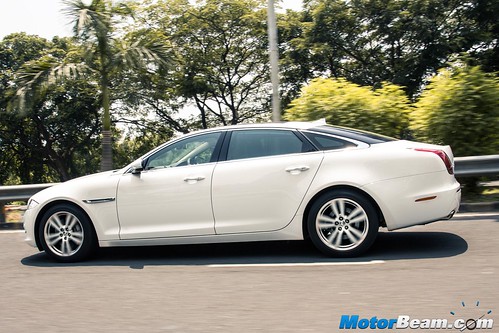 The 2.0-litre petrol engine has enough punch for regular driving

Performance – The Jaguar XJ comes with a 2.0-litre turbocharged petrol engine that churns out 237 BHP of power at 5500 RPM and 340 Nm of torque at 1750 RPM. The engine is mated to an 8-speed automatic transmission. On paper, the 2.0-litre engine may sound underpowered but it does chug around the luxo barge nicely. Cruising in the city is an easy job and despite the vehicle being so long, it is actually easy to drive it around. A slight tap on the accelerator is all that is required to move around at a decent pace. The engine is very quiet and only a negligible amount of noise gets into the cabin. 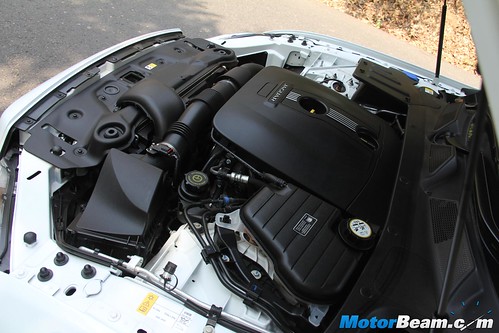 While the petrol engine is good, it is the V6 diesel powerplant which offers better performance

The engine provides punchy power delivery and covering long distances on the highway is easy. Touch the pedal to the metal and the XJ gives out a small jerk and after a slight delay, the turbo springs into action. Overtaking other vehicles is not at all difficult since you get instant power on tap just after the turbo kicks in. Keep cruising at a sedate speed in D mode and the vehicle touches 100 km/hr at 1300 RPM in 8th gear. Switch the tranny to S mode and the XJ redlines its way to glory every time. The sedan also gets manual paddle shifters which are fun to use initially but the novelty wears off soon. In the centre console, there is a tiny button with a symbol of a chequered flag. Keep that button pressed for 3 seconds and the Dynamic mode gets activated. The instrument cluster turns red and the steering wheel becomes slightly stiffer. This button is also the green light to the grin on your face for having some fun with the XJ . 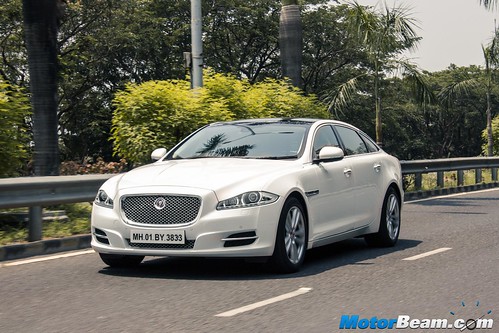 Rear wheel drive? Check! As fun as a BMW? Not quite!

The Jaguar XJ comes with a rear-wheel-drive layout. But, because it weighs so much, the tiny engine loses out when you want a blisteringly quick start or some tyre-burning action. Driving the vehicle sanely all the time will fetch you a fuel efficiency of 7-8 km/l in the best conditions while driving it sportingly will take the mileage below the 6 km/l mark. Under ideal driving conditions, an average of 6.5 km/l should be expected from this cat. The sprint from 0-100 km/hr takes 7.5 seconds while Jaguar claims a fuel efficiency of 9.4 km/l. 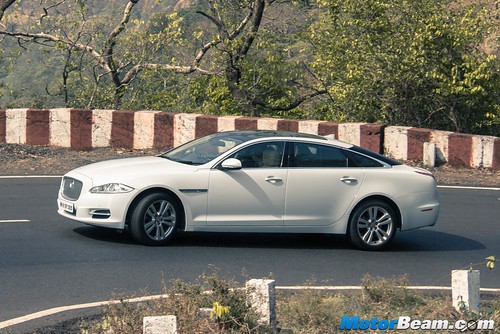 Driving Dynamics – Now this is a fairly long sedan that is aimed at comfort and not performance. The ride quality is supple and it succeeds in absorbing most bumps and craters easily. The passengers remain composed even when the vehicle goes through a pothole or a bump hard. The ergonomics of the XJ are very much sorted and there are hardly any complaints on this front. The handling is good and this Jaguar does engage the driver around the twisties. That said, the XJ is more of a comfort-oriented vehicle, but with a nice blend of sportiness. 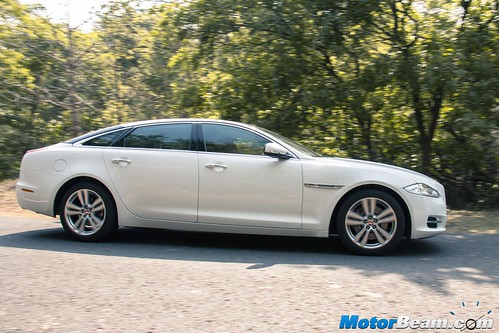 Cruising at speeds well above the ton, the sedan remains very stable and never does one lose confidence while manoeuvring it or taking corners at decently high speeds. Thanks to its length, there is a fair amount of body-roll induced and this can be felt inside the cabin properly. However, while driving in full dynamic mode, both the suspension and steering become stiffer and that’s when the body-roll reduces drastically. “Fun times are here”, I exclaimed, just after negotiating a corner at mildly high speed in dynamic mode. Top speed is claimed to be 241 km/hr. 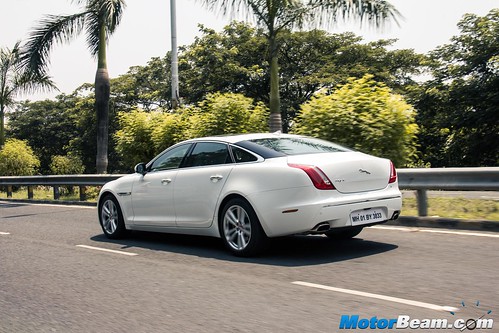 Safety and After Sales Service – The Jaguar XJ comes loaded with six airbags, ABS, EBD, ESP, Traction Control and Brake Assist. In short it gets everything that is expected in a car in this segment. The build quality is also very good and you feel safe and confident while travelling in the sedan. Jaguar Land Rover doesn’t really have a good reputation in India when it comes to after-sales service. A lot of complaints have cropped up online in recent times and JLR really needs to up its game when it comes to service. Its immediate rivals, Mercedes, BMW and Audi all offer very good levels of service quality, especially Mercedes which emerges right on top. 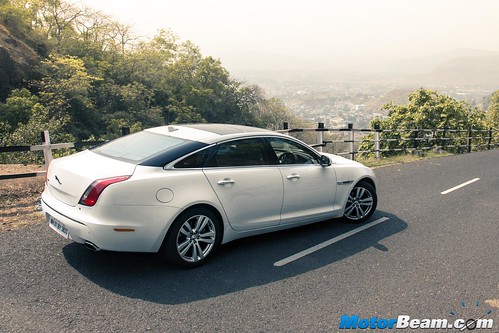 Long wheelbase means you need to be careful tackling speed-breakers

Verdict – This luxo barge is a good vehicle no doubt, but somehow we feel that it lacks a bit in front of its competition. The Jaguar XJ looks royal and classy and of course it succeeds in providing the utmost comfort to its users. It is also slightly cheaper than its immediate competitors and definitely a value for money offering in the segment. While the Jaguar XJ isn’t as fresh as the Mercedes S-Class or as loaded as the Audi A8 or as fun to drive as the BMW 7-Series, it certainly manages to give a good blend of sportiness and comfort at a lower price than its rivals.

The Jaguar XJ excels in styling, features, power and comfort. The wild cat has a decent amount of snob value too but we prefer the diesel version which seems better in comparison to the petrol powerplant. Nonetheless, the XJ makes a good case for itself for it is the most affordable car in its class. 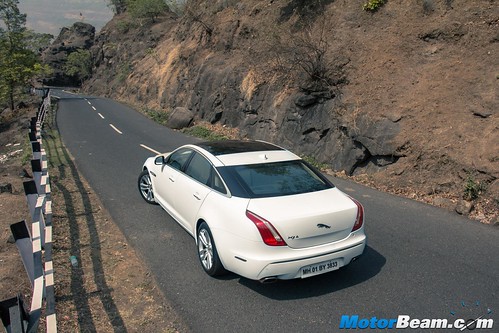 Jaguar XJ To Be Locally Assembled In India