The current and fourth generation Mercedes E-Class was launched in 2009 and the German automaker gave it a facelift last year. While the vehicle was launched with V6 engine options earlier, the facelift limited the model line-up to 4-cylinder engines as majority buyers opted for the smaller powertrain in the interest of cost and efficiency. However, all other rivals of the E-Class continued to offer 6-cylinder diesel engines and now Mercedes has brought the E350 CDI back to India. While the E250 was adequate in performance, the E350 is aimed at those few buyers who want a 6-cylinder diesel mill in their luxury sedan. 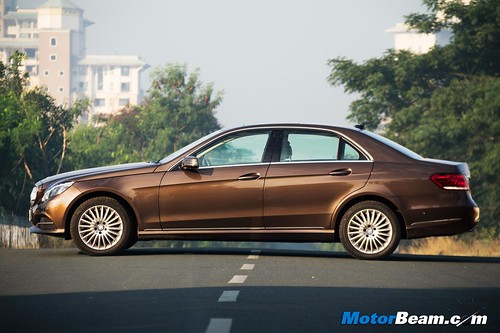 Exteriors – There is little to differentiate the big diesel E-Class from the regular models as the vehicle looks largely the same. There is of course the E350 badging on the boot and the car features multi-spoke alloy wheels which look classy on this Mercedes-Benz. The design got a fresh lease of life last year when the Stuttgart automaker chose to go for a single piece headlight (for the first time on an E-Class since the W124) and the LED units (at both front and rear) look swell. Elegance with a understated design, the Mercedes E-Class still carries a lot of visual appeal, even though the next generation S-Class inspired model is due for a launch late next year. 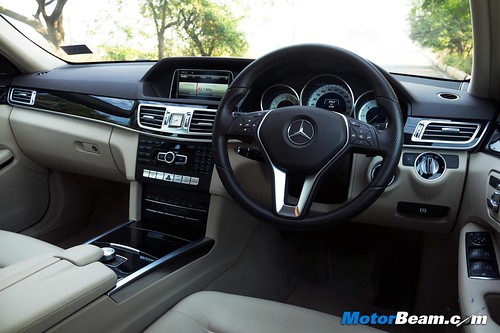 Interiors boast of excellent quality, the car gets an array of features

Interiors – Step inside and you are greeted by a familiar cabin seen in other E-Class models. The interior is nicely laid out, the design has massive appeal and quality is faultless too. The attention to detail wows you over and the dual-tone brown and beige finish of the interior gives the car a very airy feel. The E350 also gets a large panoramic roof along with a 360-degree camera, the latter making parking this big sedan a breeze. If anything, it’s the COMMAND system which doesn’t feel as intuitive to use which should be resolved in the fifth generation model which will get a touch pad like the new C and S-Class. 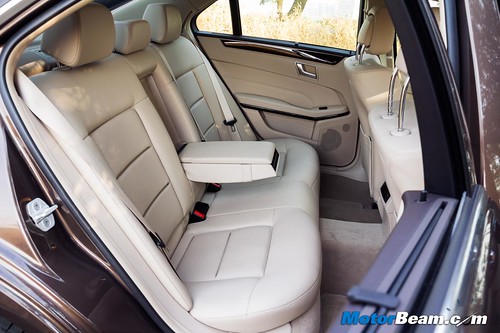 One of the best cars to be chauffer driven in, the E-Class has an excellent back bench

The Mercedes E-Class is famous for the rear seat experience it offers and occupants are basked in utmost comfort. There is more than generous room all around and one will simply fall in love with the rear bench, it is so comfortable with legroom and headroom being aplenty. The vehicle is strictly a 4-seater as a fifth passenger won’t be able to tackle the huge transmission hump which protrudes through the floor at the rear. With plenty of equipment (including some driver assist systems), fab build quality and plenty of storage spaces, the E-Class’ cabin is one of the best places to be in at this price point. 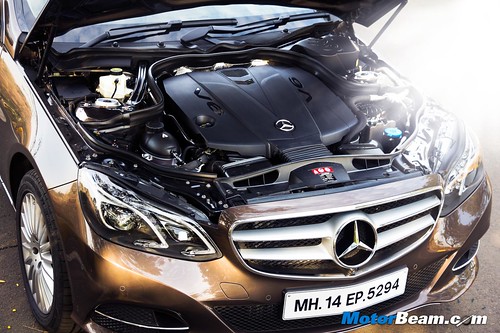 The V6 diesel engine packs in much more output, hits the ton in 6.6 seconds

Performance – The Mercedes E-Class range is offered with two diesel engines, the E250 which has always been on sale blends performance and efficiency quite well but a 6-pot motor was the need of the hour and the E350 satiates the hunger of enthusiasts. The 3.0-litre V6 turbo-diesel mill generates 262 BHP of power at 3800 RPM and 620 Nm of torque between 1600 to 2400 RPM. The added grunt makes the E350 0.9 seconds faster to 100 km/hr when compared with the E250, taking just 6.6 seconds. Top speed has increased too and is limited to 250 km/hr. But it’s not just big numbers on the clock which impress you, the whole experience with the V6 motor is just better. 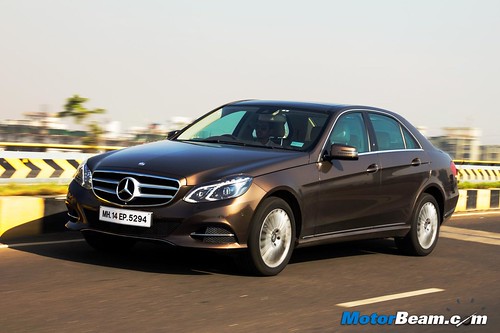 The E-Class accelerates with much more eagerness, NVH levels are simply fab

The faster acceleration is one thing but it’s not just 0-100 km/hr where the V6 powered Mercedes E-Class impresses. Getting to higher speeds is much easier and overtaking is as effortless as it can get. A quick push of the big pedal is enough to get the E-Class get going with urgency and there is absolutely no sort of uneasiness till the double ton. The engine has terrific refinement and there is none of that typical diesel-ness associated with this oil burner. Instead, the motor simply hums along and doesn’t get coarse when you stretch it to its near 4200 RPM redline. 100 km/hr comes up in third gear while in top gear at the same speed, you will be comfortably cruising with the tacho needle ticking in at a relaxed 1500 RPM. 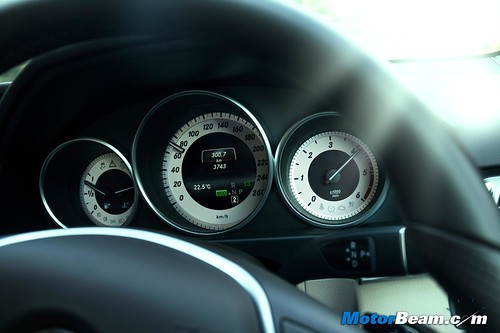 The E350 CDI is not only quick, it’s much more refined, offering butter smooth power delivery

The large 2987cc heart has good low-end pep which makes city driving a breeze but it’s really the mid-range where it truly shines. Top-end isn’t near as exciting as say a BMW 530d, the E choosing to upshift into the next cog at around 4000 RPM. There are three modes with buttons for two of them (E for Economy and S for Sports) while a tap on the paddles activates M (for Manual) mode. Power delivery is relaxed in E while the motor is mostly on the prowl when you get into S. Either way, the 7-speed gearbox doesn’t support the quickness as it’s a bit relaxed in cog swapping although the smoothness of gearshifts is excellent. With an ECO start/stop system, the E350 CDI should easily manage north of 10 km/l which is good for a car with a V6 diesel under its large hood. 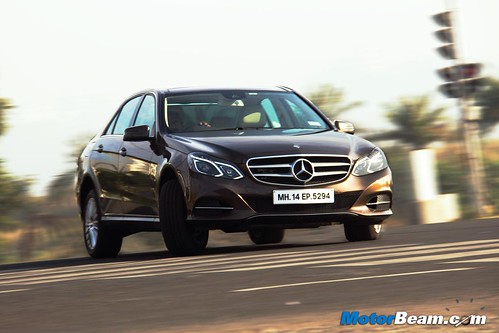 Driving Dynamics – The E-Class has always boasted of a fantastic ride quality and the V6 diesel is no different. The ride quality is nothing short of fabulous and the way this car absorbs bumps on the roads is truly something. Other than the really sharp bumps making their presence felt a bit, this Mercedes glides over Indian roads with utmost ease, ironing out everything including road and tyre noise. The stability at speed is excellent too and this car can easily get to high speeds but seldom do you realise you are actually gunning it hard. 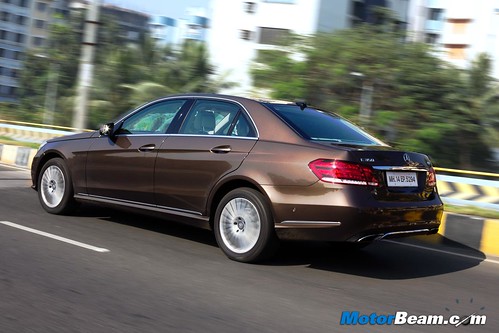 Ride quality is simply outstanding, the E likes to glide over every type of road

The Mercedes E-Class offers good handling with surefooted body control. The size of the car is evident when you try to push it hard but it does respond quickly to your inputs. With so much torque on offer, cornering hard with you foot down can lead to the rear wheels screeching incessantly but in typical Merc fashion, the traction control kicks in discretely and all is well. The steering wheel is light at low speeds and weighs up quite nicely at high speeds with excellent feel when taking sweepers at good pace. Braking performance is excellent and the car is able to shed speed with a load of confidence. 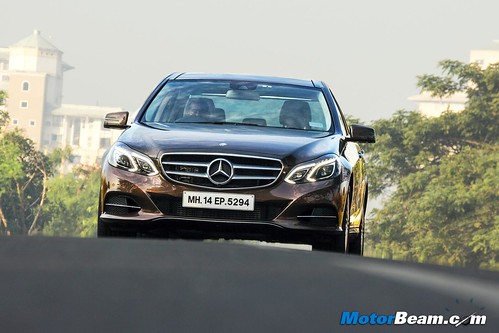 Those headlights continue to impress with the beautiful LED treatment

Verdict – The E350 CDI narrows the gap between the humble 4-cylinder E-Class models and the big brute hooligan, the E63 AMG. Offering more performance and equipment, the Mercedes E-Class V6 diesel comes at a Rs. 12 lakh premium which is a lot but it’s still cheaper than the similarly specced BMW 5-Series. If you really crave performance, then the E350 CDI is worth a buy as the E-Class is still the pick of the lot in the segment. However, for most of the buyers, the E250 CDI still makes a lot of sense (it’s no slouch either) with the E350 CDI only making it look more attractive a buy.

For Rs. 12 lakh more, you don’t get anything vastly different, thereby questioning the need of the improvement in performance as the 4-cylinder diesel equipped Merc is already a slick performer. Still if you want the best variant of the E-Class, the E350 CDI makes for a good purchase. 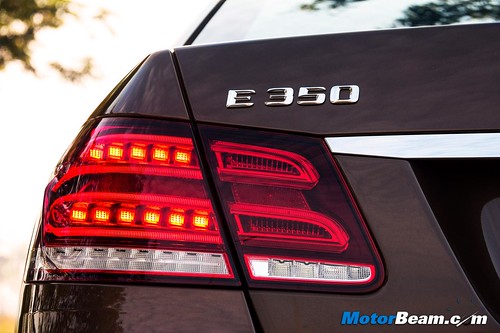 * Gearbox not as quick as it should be 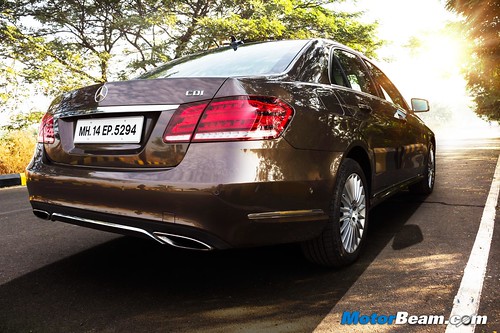