The Mitsubishi Pajero Sport is a true SUV and in automatic guise, much easier to drive

In the quest for efficiency and lower emissions, all big car makers are rushing to lighter cars which pump out a higher mileage figure. This trend has even has caught up with SUVs, a vehicle category which was at times also referred to as gas guzzlers. It’s not difficult to make an SUV more frugal, simply opt for a lighter platform which has done the trick but then, there are car companies who don’t want to go the monocoque route, after all, a big chunk of people still want to buy the good old SUVs. And when you talk SUVs, there is one car which each and every person is very aware about, the Mitsubishi Pajero. Launched in India a few years back, the Japanese automaker now sells the Pajero Sport in the country and there definitely is something about this vehicle that helps Mitsubishi survive in the Indian market, as currently, it’s the only model in their Indian lineup.

Motor Quest: The Mitsubishi Pajero name plate dates back all the way to 1982 but the Pajero Sport isn’t a model in that line-up, as the company chose this name because of the popularity of the Pajero brand. The Pajero Sport is better known as the Mitsubishi Challenger and is in its second generation, the first generation model was launched in 1996 while the current gen made its debut in 2008. It was launched in India in 2012. 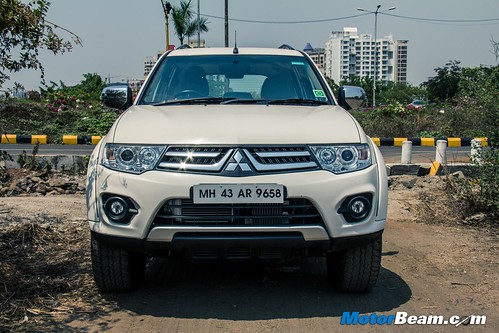 Mitsubishi recently gave a minor facelift to the Pajero Sport, the vehicle gets a new grille

Exteriors – The Pajero Sport is slightly smaller in dimensions when compared to its direct rival, the Toyota Fortuner but does it actually look smaller than the latter? No, because the design language of Mitsubishi is such that the Pajero looks no less than a spaceship. Instead of sharp creases and taut panels, it gets simple lines and rounded edges, which adds to the visual bulk. However, it has great presence and some interesting styling cues like the angular front headlamps infused with the chrome grille and a heavily sculpted front bumper. The side profile shows big wheel arches, chunky alloy wheels, high ground clearance and the tail swooping up for optimum departure angle. 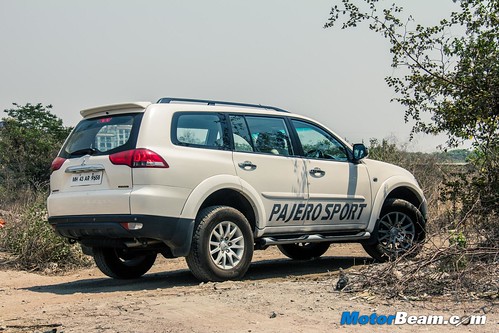 The Pajero Sport’s rear styling looks a tad bland for an SUV in this segment. The tail gate could have got more drama but is kept simple with a chrome number plate housing. The tail lamps are striking though, inspired from the sharp looking Lancer Evo X. It has a roof mounted spoiler while the lower side of the bumper gets black cladding for those off-roading sessions. The overall styling is positive but it looks out of proportion from some angles. The front has no overhang while the rear looks bulky with a big overhang. 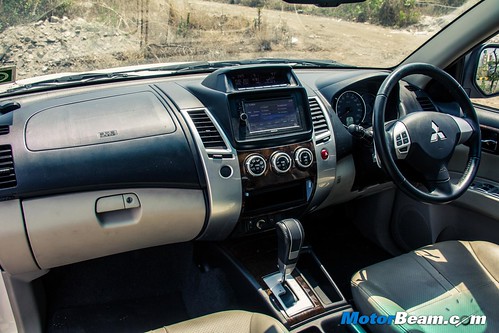 Interiors – Open the heavy door and climb into the car and you will appreciate the build quality of this vehicle, the Pajero Sport showing a lot of solidity. When you close the door, there is a massive thud too and quality levels are very good. The dashboard is nice but there are just too many colours on it, the dash is a dual-tone black and beige unit while the centre console gets wood finish and the centre AC vents gets a silver surrounding. There is no digital climate control on this Mitsubishi which is shocking of course but there is decent amount of kit on offer like projector headlights (for the low beam only), puddle lamps on each door, illuminated key ring, electric driver seat adjustment, leather seats, rear parking sensors, reverse camera, Bluetooth connectivity and a touch-screen audio system with Navigation along with the usual iPod, USB, AUX and CD options. Right above the infotainment screen is a multi-information display (not in the instrument cluster) which displays average speed, fuel efficiency, range, date, outside temperate and elevation. 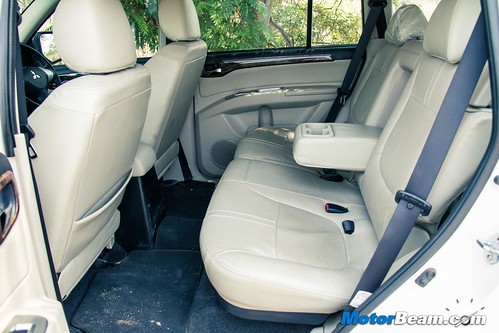 Somethings do look like an after thought in this cabin, like the mic for the Bluetooth and the speaker for the same, it’s exposed, both the mic and the speaker making this look like an after market job. There are plenty of storage bins inside the cabin, the glovebox has good depth (although it isn’t much wide) and it gets a lock too. Other storage areas include a box below the AC controls on the centre console, under the front centre arm rest, two cupholders next to the handbrake, sunglass holder on the roof but there is no magazine pocket behind the driver’s seat. The door pockets are a tad small and 1-litre bottles will be a tight fit on the front doors while the rear doors have been shaped in a way (have an inward scoop) that they can easily take a litre sized bottle. 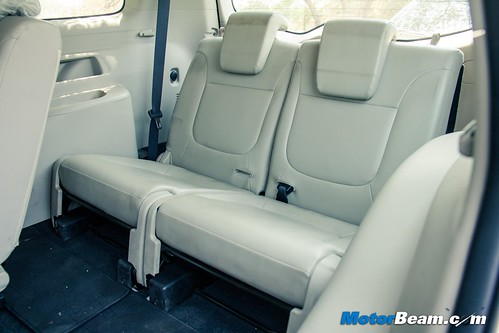 The Mitsubishi Pajero Sport has comfortable seats which coupled with the airy cabin (due to large windows and beige seats) makes this car a nice place to be in for long journeys. The front two rows are high on comfort with the middle row having ample legroom too, it also gets coat hooks next to the grab rails. Under thigh support isn’t a problem in the first row but a bit lacking in the second row and very bad in the last row, where you have to naturally climb in to get in. While headroom is good all throughout, the last row only has average legroom, making it best for children. There is a slight hump in the floor in the second row and there are only two headrests in this row, so it’s best used by two people, making the Pajero Sport a good four seater. Cup holders and storage space is on the right side in the last row. The AC vents are roof mounted and controls are placed in the second row but the master AC switch for the rear is placed too low and out of sight on the dashboard. Boot space is lacking with all three rows up but you can flip forward the second row and flat fold the third row completely to boost luggage space. There is also a power socket in the boot. 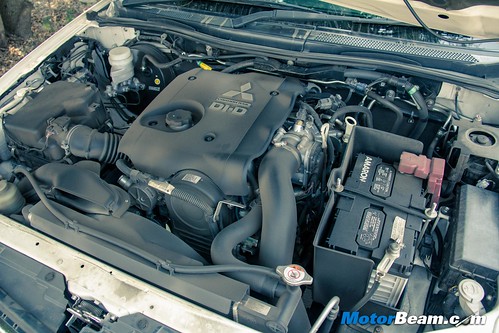 2.5-litre diesel engine is a gem and has a lot of mid-range performance

Performance – Mitsubishi offers two variants of the Pajero Sport in India; a 4WD manual which uses a 5-speed gearbox and a 2WD automatic which gets the company’s INVECS-II 5-speed unit. Both these versions of the vehicle are powered by the same 2.5-litre diesel engine but the manual 4-wheel drive gets a higher torque output of 400 Nm (it has to lug around 105 kilos more) against the 350 Nm on the 2-wheel drive automatic. Power output is the same between both the versions which is a respectable 178 PS. The engine in the manual Pajero Sport works well with the short gearing helping one to get up to pace quickly. Sure there is turbo lag but the mid-range is strong, the gearbox being slick but the clutch is quite heavy. 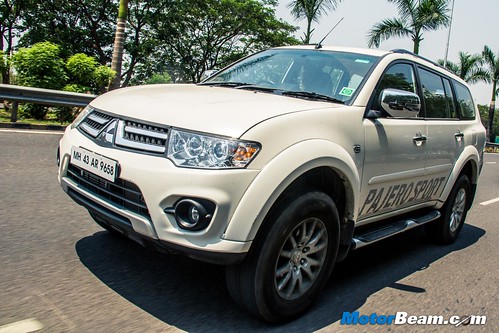 Coming to the Pajero Sport automatic, the vehicle has spirited performance but one does have to tackle the low-end lag caused by the delay in the turbo spooling up, the postive over the manual being the peak torque which although lower, is available 200 RPM earlier and is also offered in a wider band. Once up to pace, the mid-range is punchy and the motor does pull effortlessly to its redline of 4800 RPM. There isn’t any resistance even once you get to triple digit speeds and the oil burner is up to the task to keep going. 100 km/hr comes up in third gear and took a brisk 11.21 seconds to do as per our VBOX runs. 100 km/hr in top gear results in 2000 RPM on the tachometer, there is good highway grunt and city performance is also decent. 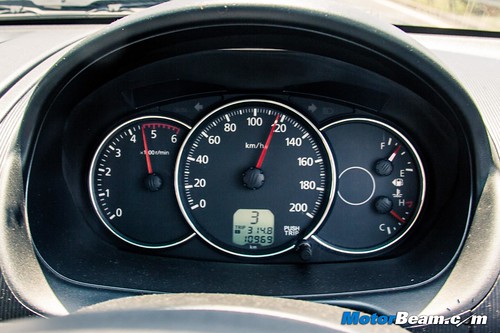 However, the gearbox isn’t such a gem, it likes to rev unnecessary and when you want to make a quick getaway, the transmission just doesn’t build the revs at initial RPMs with such urgency. In the top-end, there is also a lot of noise filtering through. There are steering mounted paddles as well and they are quite long (supercar like) and great to operate, they don’t move with the steering wheel. When in manual mode (either via the steering mounted paddles or the tiptronic function on the gear lever), the Pajero Sport just won’t upshift, giving you total control on the cogs. But there is some lag between shifts and the gearbox takes its sweet time when you drive fast. However, drive the Pajero Sport sedately and the auto box does a fine job and keeps convenience at the forefront. 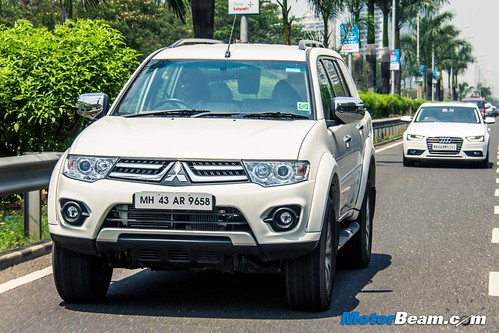 Driving Dynamics – The Mitsubishi Pajero Sport isn’t your usual SUV, it’s very off-road oriented which is obvious the moment you see the car’s wheels and visibly tall springs. Thus ride quality is excellent, although a bit stiff at low speeds, it does take all in its stride with amazing confidence. The Apollo Apterra HT tyres (the wheels have 6 bolts) offer good grip too. The brakes have good stopping power and help halt this massive SUV in quick time. Mitsubishi has given the automatic version drum-in-discs at the rear while the manual uses a drum with trailing shoes set-up. 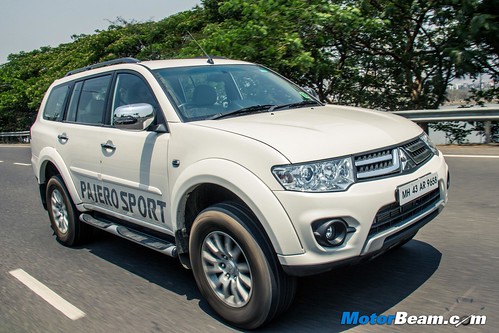 The Pajero Sport rides with a good sense of maturity

Before we get to the handling of this SUV, let’s first get well acquainted with the view from the driver’s seat. You have a very commanding position and an excellent view of what’s around you, the steering wheel is nice to hold and the rearview mirrors are big, giving an excellent view of what’s behind. But the steering is heavy at low speeds, requiring some effort to manoeuvre the car at city pace although it does weigh up decently when you get going faster. This vehicle uses a body-on-frame chassis which along with its height makes it quite top-heavy so body roll is abundant and one needs to take it easy around the bends. 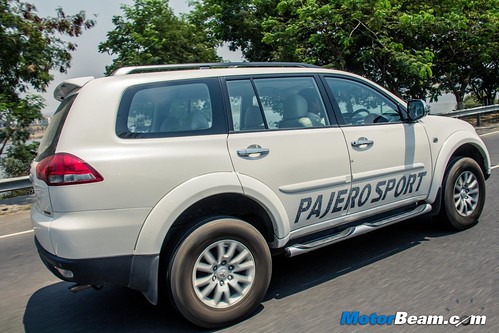 Safety and After Sales Service – The Pajero Sport has been crash tested by ASEAN NCAP and it scored a decent 4-stars in the safety test. However, the international version gets 6 airbags while the one offered in India has only dual front airbags, which is disappointing for a car this size. It would score less if the Indian version is crash tested. Mitsubishi is handled by Hindustan Motors in India and the after sales could be quite tricky for those who don’t stay near their service centres. The maintenance cost isn’t cheap either because every time something goes wrong with a part, it has to be imported and that takes time and money. Mitsubishi has future plans for growth and expansion but little is being done on that front. 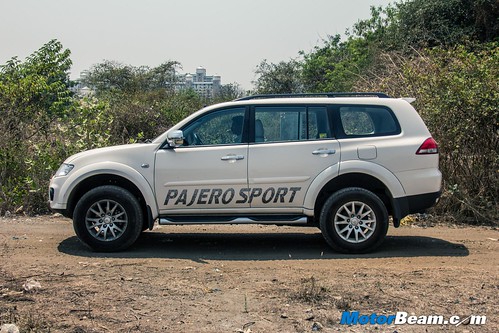 Verdict – The Mitsubishi Pajero Sport is by far the most under-rated vehicle in its class. Sure there are issues with the way Mitsubishi and its laid back partner, Hindustan Motors has gone about handling business in the country but as a product, the Pajero Sport is a fine vehicle, deserving much applaud. This vehicle is very well engineered, packs in a lot of comfort and has a visual appeal that shouts SUV. With a good diesel engine under its belly and a terrific ride quality, the Pajero Sport comes across as an excellent alternative in the segment, the automatic version only broadening this two ton vehicle’s appeal even further.

One of the most well engineered SUVs in its segment, the Pajero Sport has a lot to offer to buyers with HM-Mitsubishi’s sub par service network and experience being the only chink in the armour. 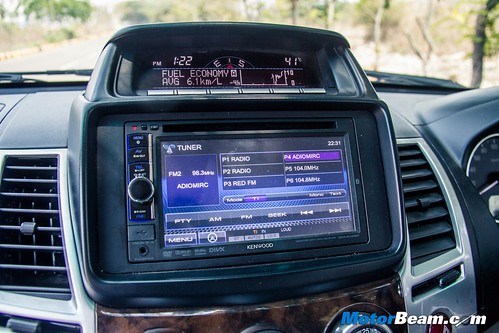 * Lack of service centres, there is no dealership in whole of Mumbai (only one in Navi Mumbai)
* Mitsubishi’s India future uncertain, company hasn’t lived upto promise time and again 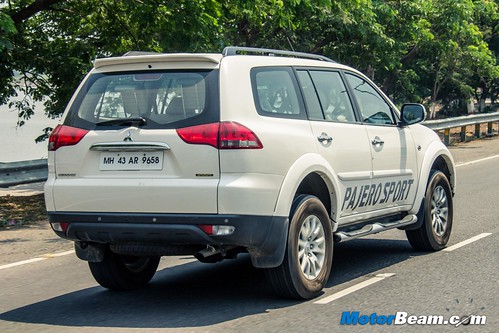