Jaguar and Land Rover are owned by Tata Motors but they originally hail from the land of the Queen. Whie Jaguar cars offer a lot of style and luxury, it is the vehicles from the Land Rover stable that offer this go-anywhere ability, while also excelling in comfort and power. The Evoque is a soft-roader and is available on sale in India since a long time but earlier it used to be brought down via the CBU route. The company has now started CKD operations for this mini SUV which also helped bring down the price by a fat margin. With a 9-speed gearbox and a more attractive price, how does the Range Rove Evoque fare?

Motor Quest: When the Evoque was initially launched globally, the vehicle became an instant hit and it used to have a high waiting period in most countries. Even now, it looks very fresh despite being a few years old and excites the young and aspirational buyers in the luxury segment. 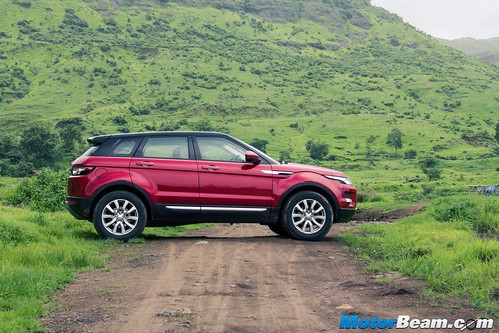 Exteriors – The Evoque just rocks when it comes to styling. The vehicle is very tastefully designed and there is not even a single staying element that disappoints. The headlights look super sleek and the front fascia has a sporty yet aggressive appeal. The headlights have circular LED DRLs that really stand out. Moving to the side profile, the 2015 model gets new alloy wheels. The roof slopes down while moving towards the rear and while the front windows are large enough, the rear windows are very small. The rear windshield is again very small and comes flanked with a big spoiler. The contrast roof which is available in black or white looks killer. 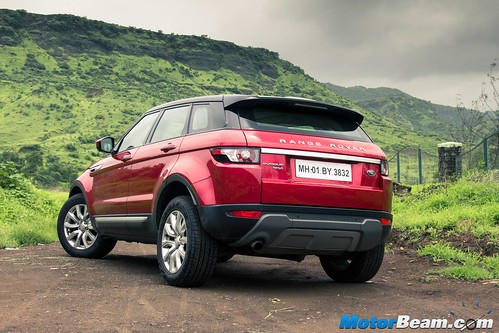 Be sure to attract lots of attention wherever you go

The words Range Rover are stuck in a very bold font on the bonnet as well as the rear tail gate, just like its siblings. There is black body-cladding running across the length of the car and both the bumpers get silver skid plates. There is a silver strip running across the length of the doors too. Both the ORVMs have a small projector that projects a white circle with the silhouette of the vehicle on the ground at night. Talking about road presence, the SUV commands a lot of glares from people traveling in other cars or just passers-by. The design of the vehicle makes the Evoque hard to miss on the road. 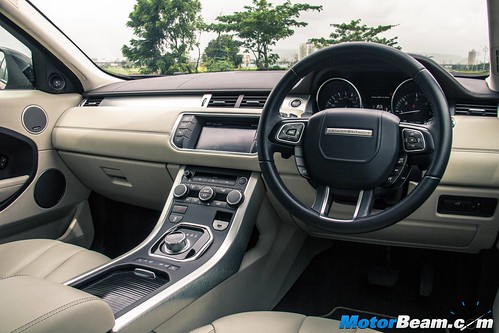 Interiors – The Evoque looks premium on the outside and is equally good on the inside. Step into the cabin and the first thing you notice is how plush it feels. Everything is laid out very neatly and all the buttons are placed within easy reach of the hand. The centre console houses a touchscreen which has a good response. The instrument cluster is also nicely designed and it shows all the relevant information like distance-to-empty, speed, current and average mileage, service reminder, etc. The vehicle is equipped with a start-stop button and just like other vehicles from the same stable, the gear selector pops up from the centre console.

The cabin has plenty of features & feels premium

The cabin has a long list of equipment. The AC works brilliantly and the 380 watts Meridian audio system produces beautiful sound. The USB and AUX ports are located inside the front armrest. My phone connected to the vehicle via Bluetooth in a jiffy. The vehicle is equipped with four cameras on the outside that display a variety of frontal, side and rear views. The rear parking camera works well and the 8-inch screen also has a lot of other options, such as the 4x4i function which works in coordination with the Terrain Response system. The panoramic roof adds a nice and airy feel to the otherwise compact cabin and is a good feature to have. 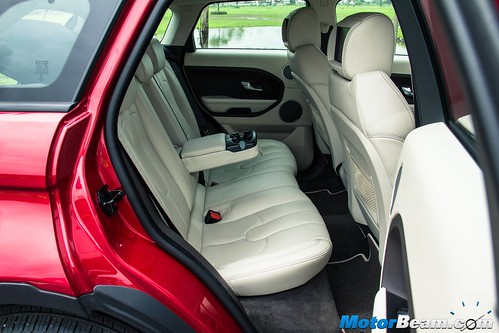 The driving position is good and the front and side views have nothing to complain about. The seats of the Evoque are just the perfect size and they are immensely comfortable. The driver’s seat gets a memory function. The seat can be adjusted in a lot of ways and it isn’t difficult to find the perfect driving position. When the vehicle is switched off, the seat lowers itself to make ingress and egress easy and then it comes back to its original position once the engine is fired up. The front seats offer excellent support to the back and thighs and the centre armrest is also pretty comfortable. Moving to the rear, again the same amount of comfort is carried on and legroom is good with the front seat kept at the mid position. The rear feels a bit claustrophobic largely caused by the small windows. Also, the width of the Evoque is less and hence it is meant to be a 4-seater. The rear comes with two TV screens and also houses a charging port, USB port and video-in slots under the rear AC vents. 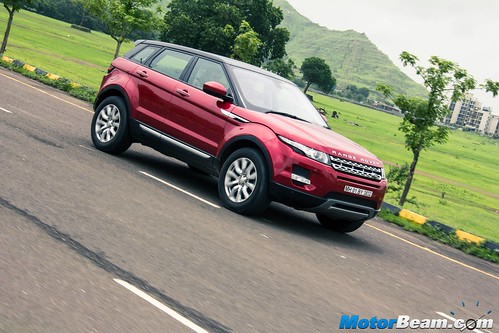 Performance – The Range Rover Evoque SD4 is powered by a 2.2-litre, four-cylinder diesel engine. The oil-burner produces 190 PS of power and 420 Nm of torque. The engine is mated to a ZF 9-speed automatic transmission with paddle shifters. The Jaguar XF diesel comes with the same engine but it is mated to an 8-speed gearbox. The Evoque gets the 9-speed unit because it is compact in size while the former gearbox is pretty big. Driving the Evoque is effortless in the city but what gets annoying is the fact that sometimes the gearbox upshifts a bit too early and then downshifts again. Also, the turbo starts kicking in a notch above 1600 RPM only after a lot of noticeable lag and when it does kick in properly, the vehicle jerks a bit and then zips ahead. 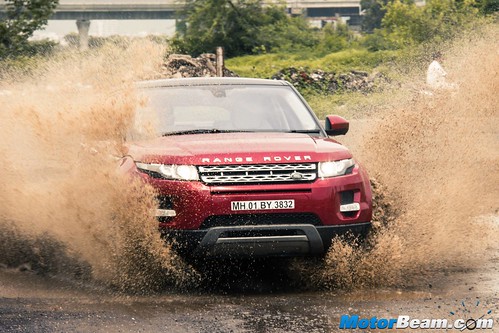 The 2.2-litre diesel engine loves cruising on the highway

The 2.2 diesel is punchy but has a loud growl

The SUV is quick when it comes to acceleration. It goes from standstill to 100 km/hr in just 8.5 seconds but we enjoyed cruising in the car rather than going flat-out every time. Top speed is limited at 195 km/hr but you’re hardly going to touch even those speeds on our roads. The gearbox is tuned for fuel efficiency and upshifts at every opportunity it gets. However, floor the throttle and the Evoque downshifts a gear with much ease but the response from the transmission isn’t very quick. The engine is very quiet when moving around with low throttle inputs, but once you put pedal to the metal, the vehicle takes off and the engine growl gets quite loud. The Evoque cruises at 100 km/hr at 1900 RPM and 2100 RPM in D and S modes respectively. 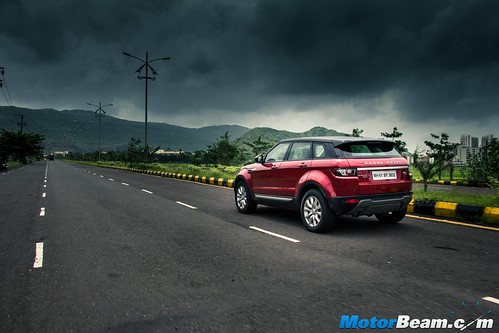 Being a Land Rover, the Evoque has excellent soft-road abilities

Things get more fun once you slot the vehicle in S mode. The car accelerates quicker and the gearbox goes all the way to the redline before upshifting. Give it the beans and the Range Rover Evoque reaches 160 km/hr in no time. The car also gets manual paddle shifters which work brilliantly and the vehicle upshifts on its own if you drive at the redline for a long time. It also comes with 4WD but since it is not a proper off-road vehicle, we only did mild soft-roading with it and the Evoque handled everything beautifully. Mud, muck, slush, water, this baby Range Rover will take it all in its stride and won’t disappoint. Talking about fuel efficiency, we managed to extract around 10-11 km/l in D mode with relaxed driving and got around 8 km/l in S mode. 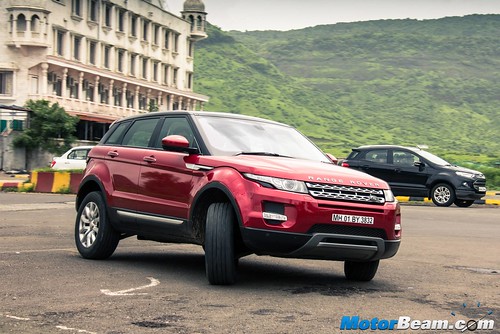 Driving Dynamics – The Range Rover Evoque is very comfortable. The ride is a bit stiff but it doesn’t make you feel uncomfortable. The vehicle glides over various types of road surfaces with ease. Hitting big potholes at decent speeds, you do feel a silent thud. With the comfortable seats and the nice suspension, ride quality remains good and passengers feel composed even at high speeds above the ton. Stability at various speeds is excellent and the Evoque moves as if it is on rails. The 18-inch Pirelli tyres offer excellent grip levels. 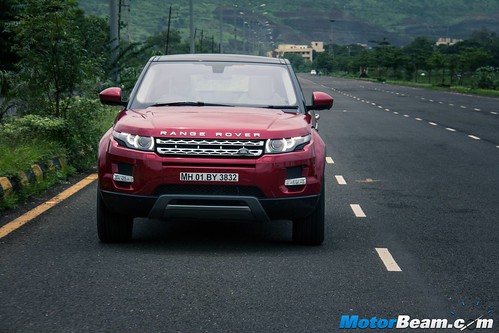 Ride is stiff but the SUV always remains composed on tarmac

Ride is stiff but comfy, handling is engaging

Since the suspension is stiffly sprung, there is not much body-roll and it was fun taking corners at high speeds. The steering is light at city speeds but once you gain momentum, the steering also weighs itself up. Handling is sharp and overall the Evoque is good to drive but still it just can’t match the driving feel of its arch rival, the BMW X3. Braking performance is again good and the bite is sharp but we’d expect the SUV to give more confidence while hard braking from high speeds. 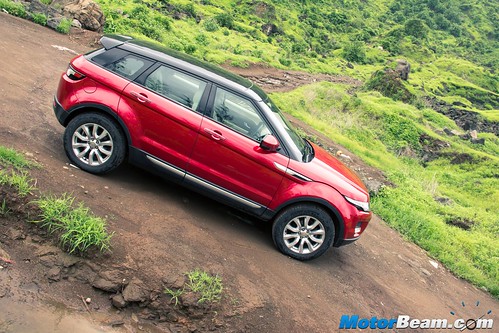 The Range Rover Evoque gets a huge dollop of safety gizmos

Safety and After Sales Service – The Range Rover Evoque is loaded with a long list of safety features. It gets Hill Start Assist, Hill Descent Control, ABS, Dynamic Stability Control, Traction Control, Emergency Brake Assist, Roll Stability Control, Engine Drag Torque Control, Trailer Stability Assist, EBD and of course six airbags. The vehicle misses out on grab handles on the inside thanks to the placement of the side airbags. Talking about service, this is where Jaguar Land Rover needs to improve. Their service levels is just about average and can’t match its immediate rivals. 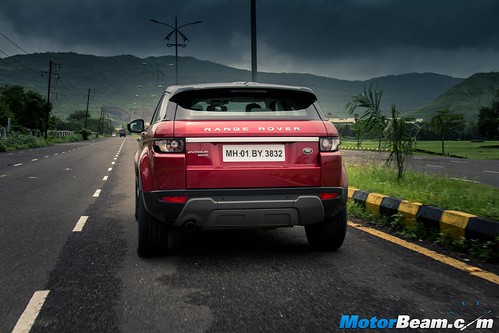 Verdict – The Range Rover Evoque is a good vehicle but we also feel that it has created a bit too much hype for no particular reason. It looks dope, has a lot of tech, drives nicely and it is a bit cheaper now. Sure, rivals like the Audi Q5 and BMW X3 are also priced in a similar range but they also offer better service reach. The Evoque should be your pick if you want to drive in a relaxed manner and want to make optimum use of all its features, apart from the fact that you’ll arrive in style wherever you go.

The Range Rover Evoque is quite a loaded car with premium quality. The cabin gives you a cocooned feel and you’ll be able to fiddle with all the buttons and features all day long. The amount of attention that this car gets on our roads is again another thing to consider. Overall, makes for a good buy if you are single or have a small family. 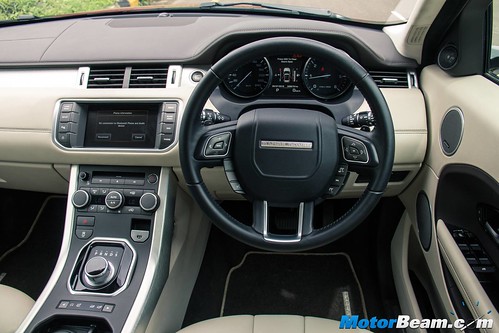 With so many electronics on offer, service quality needs to be excellent

* Attractive design grabs a lot of eyeballs, especially from females
* Beautiful interiors with a neat layout, the cabin is a comforting place to be in
* A very long list of features on offer
* Smooth 9-speed transmission, engine has enough punch too
* Steering weighs up nicely as the vehicle gathers speed 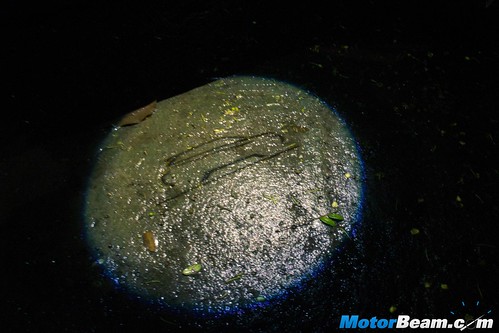 “The Range Rover Evoque has always had high aspirational value and that’s largely due to its attractive design. Even though it has been on sale for a long time now, the compact SUV still looks fresh and exciting. Sure it’s not the best package when it comes to other areas but few cars at this price can match this Land Rover in emotional appeal. Yes it does drive well and the new 9-speed gearbox makes cruising much easier but the shifts aren’t that quick. A nice car for the style connoisseurs.” – Faisal Khan, Editor, MotorBeam.
“A Range Rover for the city, that’s how I would best describe the Evoque. Not that it can’t take on the highways with ease but with its compact dimensions, frugal engine and ease of manoeuvring, this Land Rover takes on the urban grind with utmost confidence and panache. 9 gears is 1 too many as the transmission isn’t as quick as say a 8-speed ZF that is seen on other Range Rovers. But with the local assembly and the new lower prices, the Evoque makes for an excellent style statement without being overly expensive” – Javeid Khan, Deputy Editor, MotorBeam.