The Yamaha SZ is the most under-rated bike in the 150cc segment, it has a lot to offer

The 150cc motorcycle segment is very unique and we have said it time and again, similar capacity bikes with different personalities do co-exist successfully in the Indian market. Yamaha pleased both the enthusiasts and the mass market with the launch of the FZ and soon realised the bike was too athletic to please the mature audience. Thus the SZ was born and although it hasn’t been able to replicate the same success as its more masculine sibling, it has got its fair share of updates over time, the recent most coming in the form of the SZ-RR Version 2.0 which gets Yamaha’s Blue Core technology. Mumbai’s torrential rains didn’t stop us from getting astride this under-rated Japanese machine.

Motor Quest: The Yamaha SZ was first introduced in India in 2010, while it got its first update in 2012 when the SZ-R and SZ-X were launched. Just last year, Yamaha updated the SZ-RR, calling it Version 2.0 and giving it Blue Core technology. 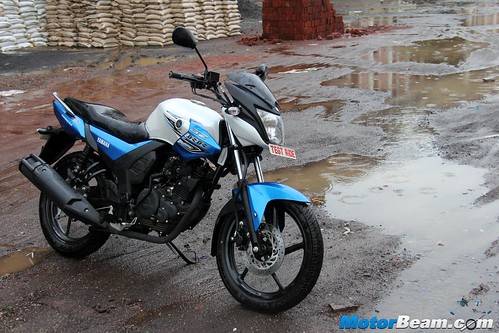 Styling remains the same, the Yamaha SZ-RR gets few updates here and there

Styling – The Yamaha SZ-RR is just a commuter motorcycle, even after being not so attractive in styling, it seeks some good attention on the road. The Version 2.0 of the Yamaha SZ-RR gets three colour options which stay unique and come only for this version. The regular Yamaha SZ-RR gets the regular colour schemes which have been going on for a while. The only difference in styling between both of these bikes is the colour code, rest everything is quite similar. The front headlamp with a small Yamaha logo and triangular mini visor continues from the earlier bike while the sharper arrow design of the tank with the tank cowl and bull-horn type split grab-rails at the rear are some of the new bits in the update. The Version 2.0 of the Yamaha SZ-RR gets a 3D emblem logo too, placed on the tank cowl. 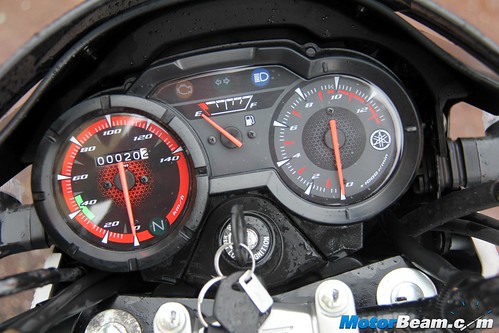 Instrument Cluster and Switchgear – Yamaha played out a bit smart in this area by improvising on the cost of the SZ-RR by not providing any digital meter but giving it a simple analog meter which gets continued from the older models, cost efficient and a smart move but not so cool. The analog meter is a combination set of fuel indicator in the centre, speedometer on the left with integrated odometer and the tachometer on the right which holds a small Yamaha logo. The redline is marked just after 9000 RPM. Considering the switchgear, these are taken right from the Yamaha FZ/FZ-S, the quality is really good. 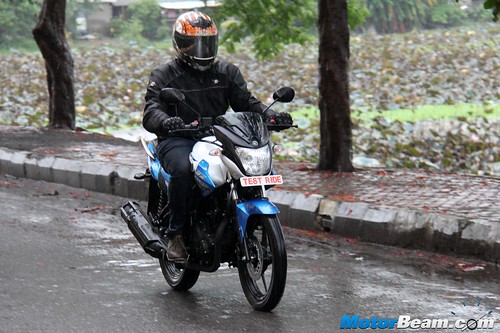 A proper 150cc commuter, seat height is the only issue in the ergos

Ergonomics – Commuter bike means comfortable ergos and the Yamaha SZ-RR is very much comfortable. The only thing that might bug any rider would be the seat height. The Yamaha SZ-RR has a good ground clearance while it has a good seat height too. Short riders sometimes might face some issues with the height. Seating position is upright and the handle isn’t much wide. Even after the tank cowl and the body design, the bike feels very thin compared to other bikes in the segment. The footpegs are placed perfectly for both the rider and the pillion. Pillion comfort is very well maintained with the proper footpegs and good comfortable seat. The split grab-rails on the rear cannot lock the helmets now but are usable to hold by the pillion. 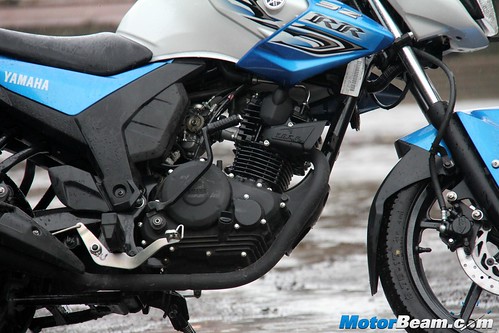 Similar powerplant as the Yamaha FZ, the SZ also gets a kick start

The detuned version of the FZ Version 2.0’s engine, the SZ-RR is much more of a city bike

Performance – No big surprises but the 149cc Yamaha motor is the same unit from the Yamaha FZ/FZ-S Version 2.0. There’s a minute change in the engine department here, the Yamaha SZ-RR gets fed by a carburettor and not a fuel-injection system. The engine is also detuned for mileage purpose while the power figure happens to be 12.1 PS at 7500 RPM while the motor shoots the same amount of torque which is 12.8 Nm at an early 6000 RPM. Yamaha engines are bit loud and sound bassy at high RPMs, well the SZ-RR gets a throaty sound which is audible even at idle state. While FZ V2 provides literally very less vibes, the SZ-RR throws out some vibes onto the handlebar and the footpegs as well, even though there’s no harshness felt at any conditions. Even with a detuned engine, the Yamaha SZ-RR builds up speed rather quickly and the mill uses Blue Core technology for improved fuel efficiency, the bike doing upwards of 55 km/l. 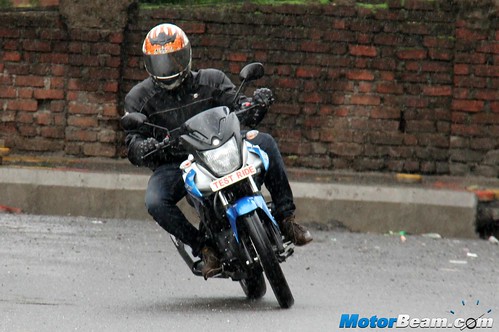 Ergonomics inspire some confidence but the tyres don’t support well

Riding Dynamics – The Yamaha SZ-RR doesn’t feel much like a new bike while riding. The engine is new from the FZ V2 but the ergos give the same commuter riding feel. It gets the standard sized tyres which is a designated standard for the 150cc commuter segment and these tyres are of harder compound and hence the rubber doesn’t give much feedback or provide any confidence. The motorcycle tends to lose out on traction just because of the not much grippy rubber. Well this combination adds up to a huge chunk while considering the mileage figures, but still there is a lack in feedback while riding. The brakes are stupendous, and even after the not so great tyres, the braking feedback is amazing. The rear drums lock up very quickly but the front disc helps a lot in stopping the motorcycle. Cornering or taking a turn might be a task as the bike feels thin and it isn’t much of a player here. Ride quality is very good though and Yamaha has clearly focussed this motorcycle’s set-up to be comfort oriented. 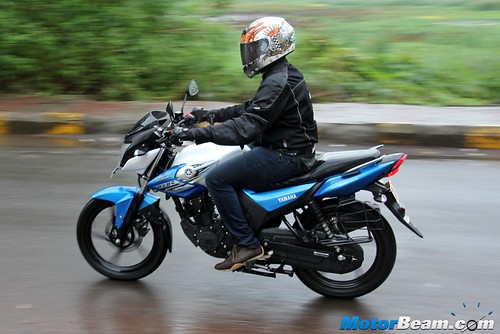 Ride quality is a gem, vibrations take a toll on the rider sometimes

Verdict – The SZ-RR gets two versions, one is the regular SZ-RR while the other gets Yamaha’s Blue Core technology. The Blue Core tech makes the engine much more efficient and is equally good at the power front. Yamaha’s bikes have really good build quality and they live upto the mark always. The Yamaha SZ-RR V2 lies in the 150cc segment which has loads of competitors with multiple options in the type and category of motorcycles. This bike would live through this segment for the reason that it gets the attractive colour options with an efficient and good performing engine in the city, making it an excellent commuter package.

The Yamaha SZ-RR competes in a very competitive segment and although it’s a good package, it doesn’t stand out for the target market who just want established bikes. 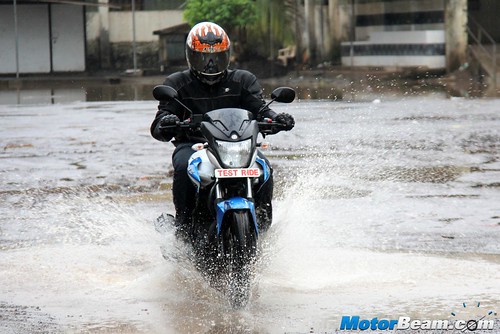 Riding the SZ-RR is fun at all times, after all it’s a Yamaha

* Styling and design, the Yamaha SZ-RR looks very attractive with the colour combinations
* Riding dynamics, the motorcycle rides like a gem
* Braking performance, even with bad rubber, the braking feedback is superb 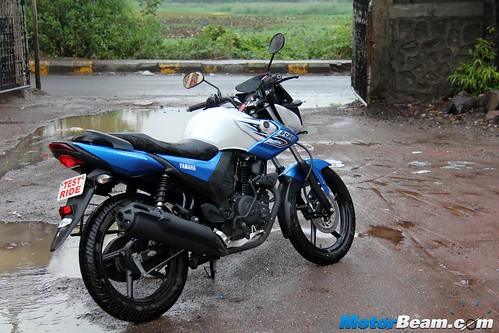 Some bits of the SZ-RR are new yet some are still old, needs more features

“So many options in the 150cc segment yet people continue to follow the herd. Japanese bikes are known for quality and along with the Suzuki GS150R, the Yamaha SZ-RR is also very under-rated and doesn’t get the attention it deserves. It’s not an exciting bike but for those who want a no-nonsense motorcycle in the segment, this Yammie sure strikes the right notes.” – Faisal Khan, Editor, MotorBeam.

While the sales are extremely low, Maruti keeps the top spot. The May 2020 hatchback sales are quite terrible to see. Usually the sales are 10   END_OF_DOCUMENT_TOKEN_TO_BE_REPLACED

QJ SRK 600 is a Benelli TNT 600i under a new Chinese brand. While Benelli is an Italian motorcycle brand, it is now owned by Zhejiang Qianjiang   END_OF_DOCUMENT_TOKEN_TO_BE_REPLACED