Irony at its best, the least popular Ferrari of modern times is really the best selling model to come from the manufacturer in years. The California, despite being unconventional by prancing horse standards turned out to be a highly successful model and more recently was updated with a turbocharged mill giving a glimpse on the powertrain of Ferrari’s future models to come. The 2016 Ferrari California T is a grand touring sports car which has been produced as a two door ‘2+2’ hard top convertible and is now the newest modern day Ferrari to get a force fed powerplant. Representing a new, fourth model range for the company, the California T arrived in India last year and MotorBeam is the first Indian publication to test the most attainable prancing horse out there. So, does it still continue to give enthusiasts that aural pleasure or has turbocharging ruined the Italian pony? Read on to find out. 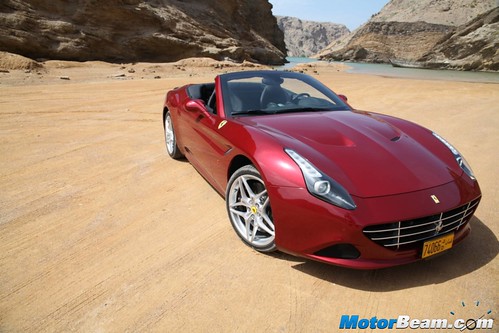 The new California T gets a design correction, loses the awkward styling

The 2015 Ferrari California T is an update of the MY2008 California and features new sheet metal, new interior, a revised chassis and most of all a downsized in displacement turbocharged engine with an improved transmission. It was first unveiled on the web and subsequently made its debut at the 2014 Geneva Motor Show. The ‘T’ in the badging stands for Turbo and this model replaces the normally-aspirated variant. Recognisable as the California, Ferrari designers have been quick to address the design niggles associated with the older car. As a result, the detailing has been replaced with simpler lines while maintaining a similar profile. Ferrari claims that every panel has been changed and it’s mainly at the front and rear where changes are most visible. The folding metal roof is retained and does its job in 14 seconds, but only when the car is at a standstill. 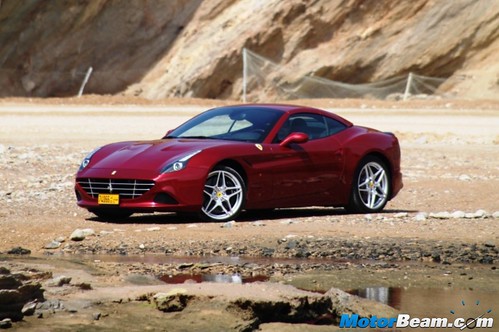 With the aluminium roof up, it is really hard to distinguish the California T as a convertible

Like all Ferraris, the California T boasts of cutting-edge technological solutions that make it absolutely unique. The most notable engineering feature is the new turbocharged V8 engine. Interestingly, turbo technology is not new for Ferrari and has had a place in the Prancing Horse’s engineering tradition. The California T also uses an aluminium-intensive chassis which is lighter, thanks to the cutting-edge aluminium fabrication techniques and construction technologies. 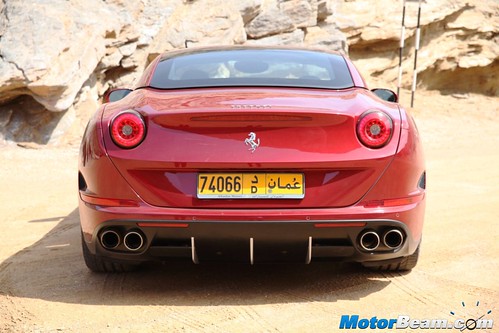 Technical features are matched by a new, even more extensive choice of colours developed by the Ferrari Styling Centre including two-tone finishes, three-layer paint technology and modern re-interpretations of classic colour schemes which increase the exclusive personalisation possibilities even further. Contemporary features which you will not get include stalk indicator levers, a gear shifter, head-up display or manual parking brake. These are either relocated or use different management systems. Modern conveniences are in abundance on the Ferrari California T including air-conditioning, infotainment systems and satellite navigation. The driver gets a large in-the-face yellow analogue tachometer in the centre with LCD screens on either side offering a multitude of information via graphics. Gear selection and launch control happens via push buttons located on the purpose built floating console. 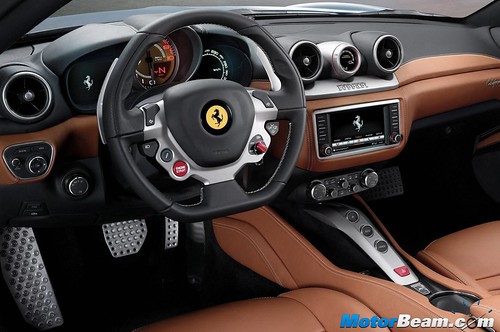 The Ferrari California T gets special instrumentation on the dash including the Turbo Performance Engineer (TPE) and comes with a digital display and provides pointers on making the most effective use of the new engine’s performance. The TPE is activated by a prolonged three-second tap of the screen and has five different displays including time, exterior temperature, turbo pressure, plus two others that highlight the distinguished characteristics of the new turbocharged engine. You also have a Turbo Response (TR) indicator which shows the percentage of the maximum engine response available to the driver depending on engine revs. Even as a roadster, one would want to know a little bit about Turbo Efficiency (TE) on the move and there’s a gauge that shows the percentage of maximum efficiency at which the engine is running. 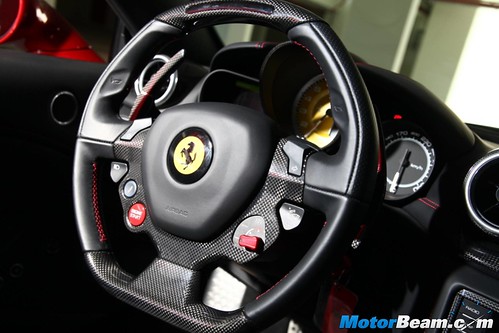 Although it’s more of a roadster than an outright supercar, Ferrari has ensured that the California T’s steering wheel is high tech in its execution without losing the human-machine interface qualities. Improvements have come with the adoption of steering wheel-mounted controls and paddles set more closely behind for greater ergonomics, particularly in sportier, dedicated style of driving. Column stalks are absent and all the main controls are now on the steering wheel spokes. The F1 paddles are longer and flush mounted on to the steering wheel rim for more rapid gear shifting. 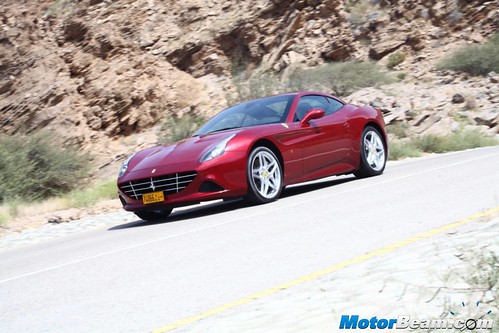 Under the bonnet of the Ferrari California T resides a new direct-injection downsized 3855cc V8 twin-scroll turbocharged engine. It produces 552 BHP of fine tuned power (vs 453 BHP from the naturally aspirated 4.3-litre unit) at 7500 RPM and 755 Nm of torque available at 4750 RPM. The engine is mated to an improved 7-speed dual-clutch gearbox with TipTronic function. The turbocharged engine is mapped in such a way that it actually offers the best of both worlds – smooth power transition and fuel efficiency. The engine utilises small turbos and a variable boost management system that offset the possibility of turbo lag. 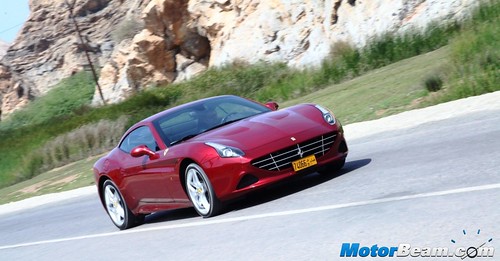 In normal driving conditions (comfort mode), the California T sticks to its role as a grand tourer and doesn’t feel as aggressive nor does it attempt to overwhelm the driver. Gear shifting in automatic mode is smooth and downshifting is rapid often accompanied by a blip from the exhaust. The system allows the driver to override and engage manual paddle shifting. The V8 turbo also gets Variable Boost Management, which adjusts torque delivery to suit both the revs and gear engaged. Thanks to the system, the California T delivers increasingly powerful pick-up yet optimises fuel consumption. The throttle response is razor sharp and the engine boasts of an exceptionally broad power band going all the way up to 7500 RPM. 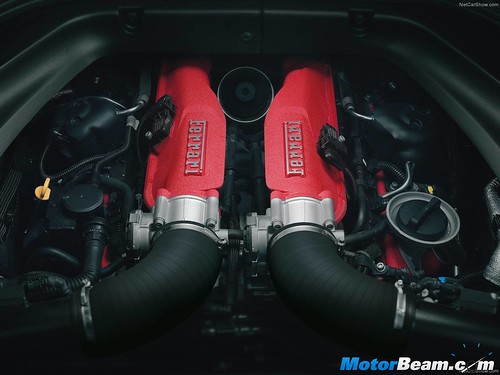 Despite being turbocharged, the mill sounds unmistakably like a V8

In Sport mode, the turbocharged mill offers extra torque and the gears hold a little longer while the chassis also tightens up. The springs used on the 2015 California T are 11 percent stiffer and the steering comes with a 10 percent quicker rack. Ferrari’s F1-inspired traction control system works well and is better suited to turbocharged engines. Further, the Italian automaker has upgraded the ESP system which now integrates new electronic systems for more efficient management of the significantly greater torque delivery. A solution that allows the convertible to accelerate around 8.5 percent faster out of corners. Also, since the new engine sits 40 mm lower than its predecessor and the whole car is 20 mm lower than before, the road holding capabilities are therefore definitely influenced. 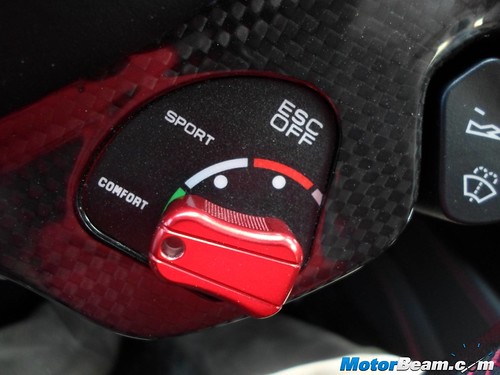 Ride quality is surprisingly good while feeling every bit exotic

Unlike, many other turbocharged cars, there’s no hint of turbo whine on the Ferrari California T. The weight of the steering is near perfect and the feedback to the driver is gratifying. All said, it’s pretty fast too; with the top up or down – it sprints from 0-100 km/hr in 3.6 seconds flat and from 0-200 km/hr in 11.2 seconds. Acceleration out of corners is awesome, so is the vice-like grip from the tyres, but it feels neutral as well. At high speeds, some wind noise may filter in the reasonably well insulated cabin when the top is up. To ensure that the California T sounds like a proper Ferrari V8, engineers have put in a lot of effort in fine tuning the exhaust for the right quality of sound. 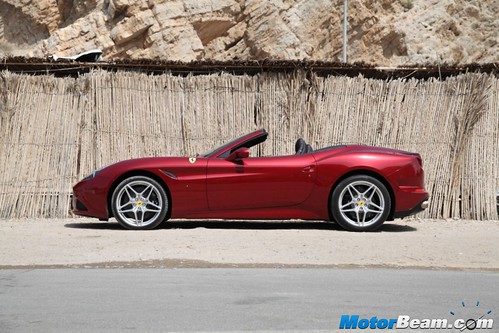 When it comes to extracting performance from the force fed Ferrari California T, it completely depends on the driver. The best performance comes when the car is in Sport mode and driven using the steering mounted paddle-shifters. The trick is to engage a lower gear in a slightly higher rev band of 3000-3500 RPM and then throttle hard. On the suspension front, improvements on the T with new damping technologies, three new sensors and a faster ECU to modify the magnetic field in the dampers have been made. The Brembo carbon-ceramic braking system do their job very well and features new pad material that deliver a higher coefficient of friction which remains constant in all conditions of use. It is also less prone to wear so that both pad and disc will last more or less for the car’s entire life. 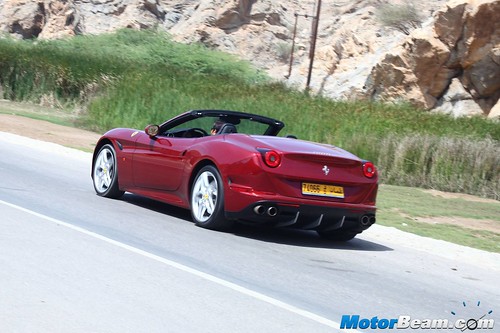 This car boasts a 0.32 drag coefficient, making it one of the most aerodynamic Ferraris

A highly enjoyable convertible, there’s no arguing that the 2015 Ferrari California T is a big improvement on the old California. As a package, it is much sharper to drive and looks nice too. The key element here is the engine and the new twin-turbo 3.8-litre V8 which despite losing a few cc in displacement delivers higher output which in turn encourages driving thrills. The exhaust note is among one of the highlights on this Ferrari which is simply aural bliss. The California T is a great introduction to the existing line-up and also makes for a capable tourer. 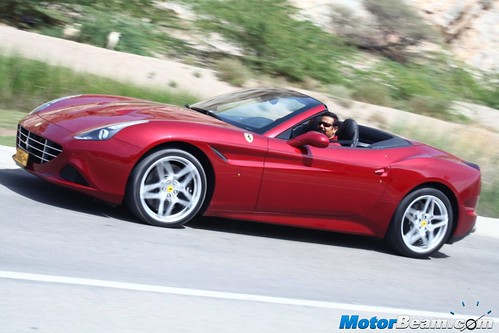 * The new turbocharged V8 is responsive, turbo lag is well contained and offers a pleasing exhaust note
* The styling has been updated for the better, the convertible looks less awkward than its predecessor
* The abundance of tech on board coming from Formula 1 cars really urge you to push the convertible

* Not as involving to drive as the bigger Ferrari range