Motor Quest: The Fiat Urban Cross is based on the Avventura which is based on the Punto Evo. Unlike other automakers which paste only black-cladding on their vehicles and call them crossovers, Fiat has actually made some changes to the mechanicals too. 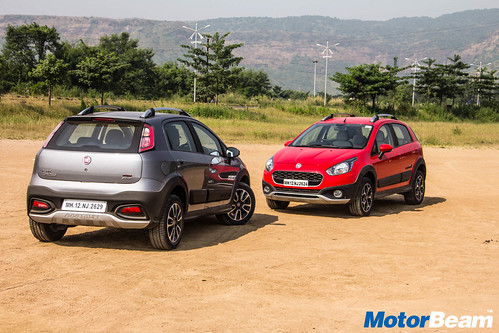 Exteriors – The Fiat Urban Cross is quite a looker, just like the Avventura. The front has the typical familiar place and the new grille adds a lot of flair to the styling. The headlamps look catchy too. The side profile looks classy and the black cladding adds a touch of ruggedness to the car. The petrol variant comes with Scorpion alloys while the diesel trim gets diamond cut wheels. The derriere looks clean and the omission of the spare wheel on the boot has chopped off some inches from the car’s length. Both the bumpers look tough and the cladding is carried over to them. The petrol variant comes with “Powered By Abarth” written on the rear doors and it looks awesome. The Urban Cross also comes with meaty 16-inch tyres and all in all, the car really boasts of nice road presence. 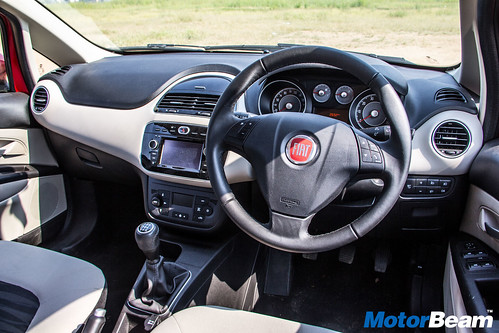 Interiors shared with the Avventura with minor changes

Interiors – The interiors are carried forward from the Avventura albeit with some minor changes. Talking about the petrol trim, is available only on the top Emotion variant and hence it comes loaded with a touchscreen, all power windows, auto lock, seat height adjustment and steering wheel adjustment. The seats are comfortable but just like other Fiats, the steering is set at a high position which feels awkward. The touchscreen isn’t the best either and many times we had to press twice or thrice to get what we wanted. Sound quality from the audio system could have been better too. The diesel trim gets only 2 variants (Active and Dynamic) and we had the top variant which again has a decent equipment list. The dashboard of the diesel trim comes with soft touch inlays while the petrol model gets hard plastics everywhere. The seat fabric is more or less the same on both trims but the colours have been interchanged. Another thing is that the Urban Cross misses out on the meters that are installed on the Avventura’s dashboard and because of this there is some free space to be had which doubles up as a storage space. 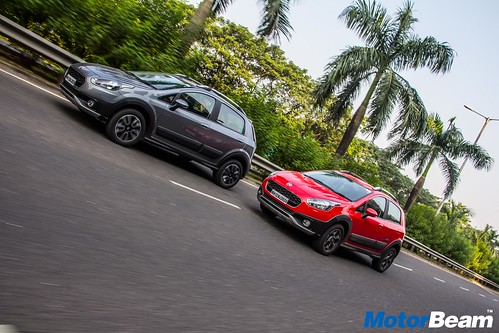 The 1.4-litre turbo petrol engine has insane performance to boot

Performance – The Avventura comes with 1.4-litre petrol and 1.3-litre diesel engines. The Urban Cross has the same 1.3-litre MultiJet diesel engine but the petrol engine is where the fun lies. It comes with the 1.4-litre turbocharged petrol engine which also powers the Abarth Punto and Abarth Avventura. This powerplant belts out 140 horses which is brilliant for a car of this size. There is a slight amount of turbo lag but boy does the car fly once the turbo starts spooling. The engine begs to be revved all the way to 6000 RPM and the car doesn’t hesitate even once. Acceleration is scarily quick and the way this engine delivers power is way too addictive. The only downside of this engine is that the fuel indicator needle goes down as fast as the car is. The clutch is light but gear shifts are very notchy and they do rob off some fun. The clutch also feels a bit weird initially and I did stall the car a couple of times before getting a hang of it. Expect a fuel efficiency figure in single digits with the Abarth engine. 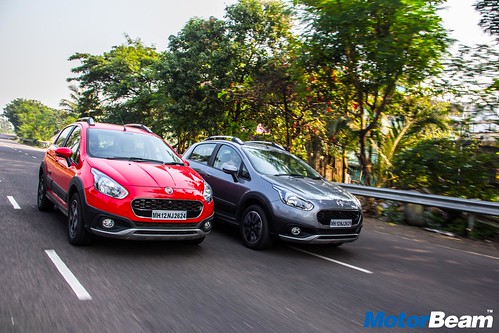 The diesel engine is familiar and well-suited for normal driving

The petrol engine is clearly the better performer with stupendous acceleration

The diesel engine is very familiar as we have driven it on many cars. It is offered in the 90 HP tune which produces 209 Nm of peak torque. As you would expect, there is some turbo lag below 2000 RPM but after that there is a good surge of power till a notch above 4000 RPM. Acceleration is decently brisk and the car touches 100 km/hr in 14.27 seconds compared to the petrol model which does it in 9.22 seconds. Again, the gear shifts are very rubbery in feel and the clutch is a bit heavy on the diesel. The oil-burner is pretty frugal but due to the weight of the car, you can expect around 12-13 km/l in city traffic and around 16-17 km/l on the highways. 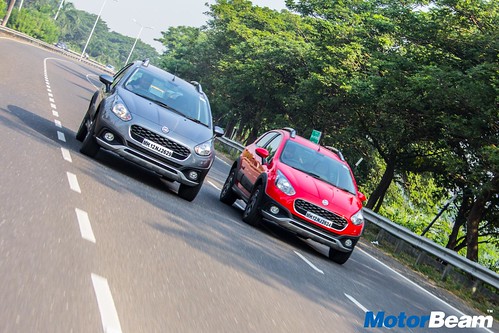 Suspension is brilliant and the steering has great feedback

Driving Dynamics – The Fiat Urban Cross has brilliant ride quality and the suspension is very pliant and can soak up any sort of broken tarmac easily. The car feels very stable at all speeds and composure feels rock solid. The steering also has brilliant feel and feedback and is very precise too. The tyres have good levels of grip and the Urban Cross feels predictable while diving into corners. However, due to the increased ground clearance, the body roll feels very pronounced. The brakes on the Abarth have a very sharp bite and it takes time getting used to, while braking on the diesel trim is pretty satisfactory too. 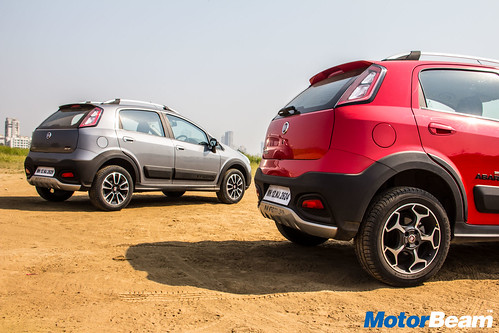 Safety and After Sales Service – The Fiat Urban Cross petrol gets dual front airbags and ABS on the top Emotion variant which is offered only with the petrol engine. The diesel trim misses out on airbags. ABS with EBD is offered on the Dynamic trim which is the top variant for diesel. The base Active variant doesn’t come with safety features. Talking about Fiat after-sales, we all know that the company needs to really work on this aspect as rivals are far ahead. 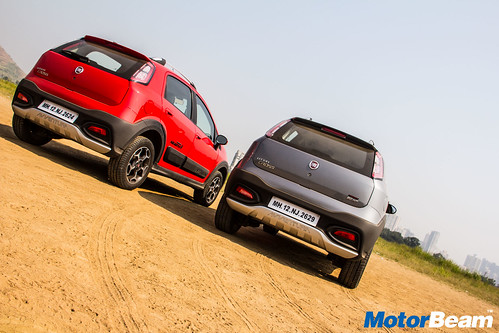 Verdict – The Fiat Urban Cross is a nice car with some negatives but it remains to be seen whether the market will accept it or not. The Avventura turned out to be a dismal performer so the Urban Cross isn’t going to be much different. Also, the fact that you get properly loaded premium hatchbacks and compact sedans for this price means that buyers would definitely want to look elsewhere since they love cross shopping. The Urban Cross is similar to the Avventura and due to the omission of the boot-mounted spare wheel, it is far more practical in the city and is even considerably cheaper. 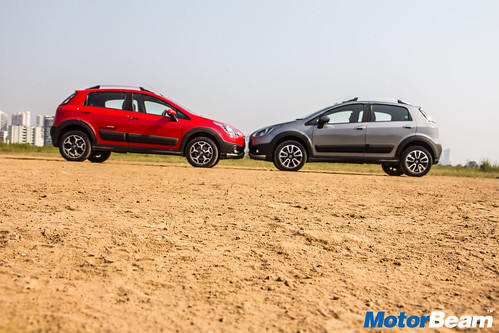 The Urban Cross does have its fair share of negatives too 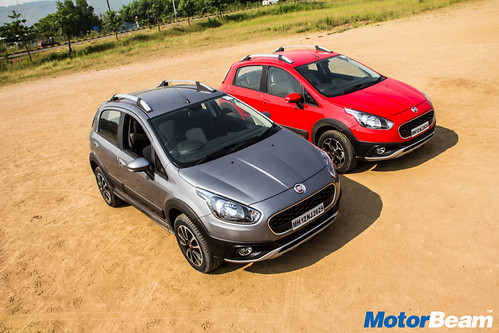 “The Fiat Urban Cross is yet another old wine in a new bottle. Fiat continues to offer the same car with new names and minor changes which isn’t going to help sales and history has proven the same. While the Urban Cross is a good car and among the better ones in the pseudo crossover segment, one simply can’t deny that buyers are looking for fancy gadgets over driving feel.” – Faisal Khan, Chief Editor, MotorBeam.
“The Fiat Urban Cross is a new wine in old bottle because even though the car might be getting cosmetic tweaks every now and then, it is still based on old Punto which has been around for 10 years (global markets included). The Urban Cross lacks the finesse that rivals offer and it doesn’t really make a strong case for itself in this competitive market. ” – Parth Gohil, Senior Road Tester, MotorBeam.