A very good package has been made even better and that’s the new Ford EcoSport for you!

It all began when Renault launched the Duster in India. A completely new segment was created and it took the market by storm. The Duster, a nice and practical compact SUV turned out to be a runaway success and why not, it offered a lot for the price, right? Well, the answer to that question was delivered by Ford who launched the EcoSport which offered a bit more than the Duster and at a price which was a bit lesser. The EcoSport also became quite a success story until other compact SUVs started to flood the market. In a bid to generate more sales and of course to freshen up the product range, the American automaker has given a mid-life update to the baby SUV and here’s how it fares.

Motor Quest: A lot of buzz was created even before the EcoSport was launched and thousands of people had pre-booked their vehicles. The SUV had a waiting period of almost a year in certain cities! With newer competition coming in, demand for the EcoSport faded out slowly and now the first update has been launched. 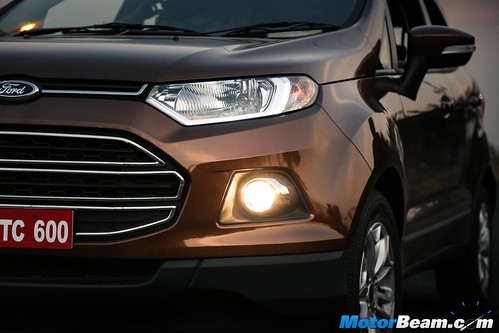 Exteriors – The Ford EcoSport is a smart looking vehicle and this updated model that we have over here is no different. There are hardly any changes to the outsides and the SUV continues to flaunt its muscular and aggressive front fascia. The alloy wheels remain unchanged on the Indian model and we would have appreciated if Ford could have provided a different design with this update. It is also good to see that the spare wheel is still mounted on the tail-gate unlike the overseas model. The fog lamps get integrated DRLs while the headlights get light guides which are basically thin strips of white light. The EcoSport now gets a new brown colour which looks pretty attractive. The boot opening button is moved underneath the chrome handle unlike the previous model. 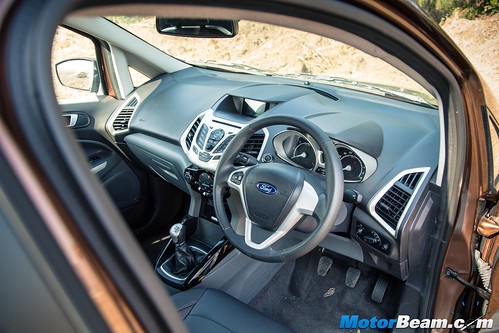 Interiors – The overall layout of the interiors still remains exactly the same and there are very few changes which might even go unnoticed to the casual observer. The dashboard and various other components still boast of excellent quality materials and even the build finesse is excellent and a notch better than the new Figo twins. The instrument cluster and centre console get the same funky design. The seats are perfectly sized and provide splendid support. Space at the front is good but those of you who are seeking rear seat space might have a slight issue. Exterior visibility isn’t the best and the thick pillars are to blame for this. 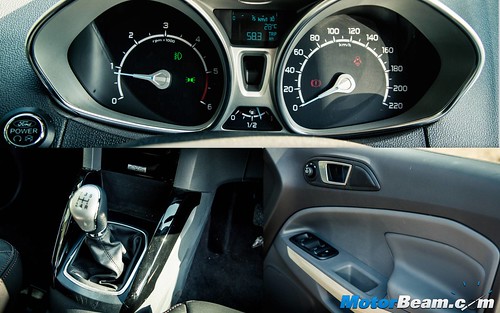 The EcoSport has good equipment on-board, ergonomics are also sorted

The EcoSport gets small changes to the interiors such as the aluminium finished gear lever and inside door handles, the silver strip on the door pads, the chrome trims on the instrument cluster and of course the leather-wrapped handbrake which is now placed towards the driver’s seat unlike the previous model where it was positioned close to the passenger’s seat. The EcoSport also gets a new IRVM with automatic day/night function and automatic wipers. Apart from all this, the compact SUV continues to boast of its impressive equipment list. 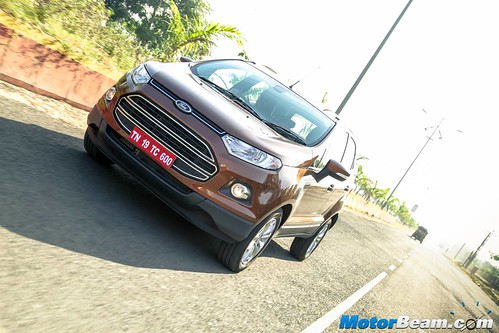 The TDCI powerplant belts out an additional 9 PS of power

Performance – The highlight of the updated EcoSport is of course the 1.5-litre diesel engine. The oil-burner now whacks out an additional 9 PS of power and the total power output has been bumped up to 100 PS, which also matches the numbers of the Figo twins. Torque remains at 205 Nm and the engine is still mated to the same 5-speed manual gearbox. Gear shifts are not the smoothest out there and still feel a bit notchy. 0-100 km/hr has been improved by a small margin which isn’t really noticeable in normal usage, but what is noticeable is the fact that the TDCI mill has a much better bottom-end now and the car responds to throttle inputs in a very brisk fashion.

The clutch feels lighter now while the turbo starts spooling in from a notch below 2000 RPM. All the 99 horses are delivered across the rev range in a very linear manner. 100 km/hr comes up at 12.76 seconds from standstill compared to 13.43 seconds of the previous model. The EcoSport also gets a 1.5-litre petrol engine and a 1.0-litre EcoBoost engine and both of these remain completely unchanged. The EcoBoost is offered with a manual transmission while the bigger petrol engine gets a 5-speed manual gearbox along with the option of a 6-speed DCT. 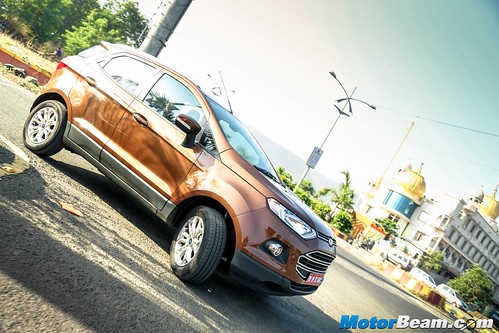 The steering is direct and it offers pretty good feedback

Driving Dynamics – Dynamics and Ford cars go hand in hand. The EcoSport boasts of excellent handling capabilities and it is actually a very fun car to drive around. The steering is very precise and it offers excellent feedback and feel. It is moderately weighed, neither too heavy nor too light while it also gains weight significantly as the vehicle’s speed increases. High speed stability is good on the EcoSport and it is fun around the corners but only upto a certain limit. You can never push an SUV as much as a sedan but the EcoSport does feel car-like to drive. There is some body roll too but not as much as other compact SUVs. It is somewhat comparable to what small cars have. 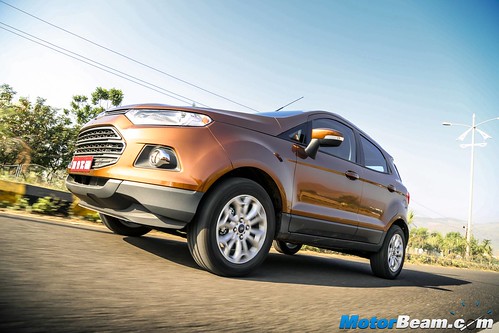 The Ford EcoSport loves gobbling up potholes with ease

The ride quality on the Ford EcoSport is also very good and the suspension does an impressive job of ironing out all the potholes and craters that Indian roads have to offer. The SUV comes with MRF tyres which have satisfactory levels of grip if you don’t intend to push the vehicle very hard and the brakes also perform in a positive manner, making the vehicle shed speeds without any sort of unnecessary drama. 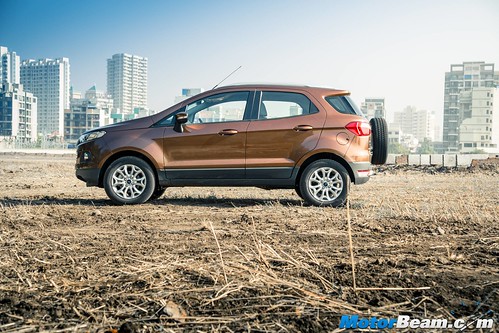 The EcoSport now gets standard ABS on most variants

Safety and After Sales Service – The EcoSport is now offered with an extra variant which takes the total variant count to six – Ambiente, Trend, Trend+, Titanium, Titanium AT and Titanium+. Ford offers ABS on all variants except Ambiente. Dual front airbags are offered on all variants barring the Ambiente and Trend trims. The Titanium AT and Titanium+ trims also get side and curtain airbags. Ford has loaded the automatic variant with Emergency Brake Assist, ESC, Traction Control and Hill Launch Assist. The EcoSport comes with a 2 year/ 1 lakh kms warranty and Ford also offers a 24/7 roadside assistance service. 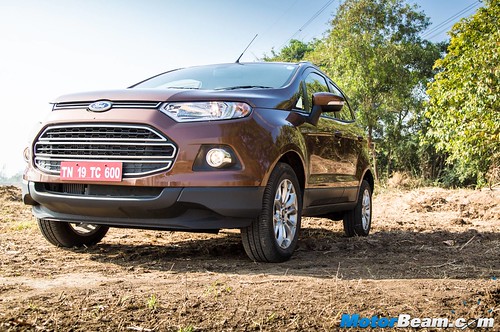 Verdict – Right from the day it was launched, the Ford EcoSport has always fared as a very good product offered at a good price point. It has its positives like the engine, dynamics and features along with some negatives like the limited space on offer, but it continues to remain a very attractive package on the whole. Ford hasn’t increased the prices of the updated model by a big margin and while extra power is always good to have, the additional useful features are like an icing on the cake and hence the EcoSport continues to remain a very good choice in the compact SUV segment.

Ford has a really good product on their hands which is also cheaper than its rivals like the Renault Duster. The only reason why Ford gets negative points is the fact that most buyers still have that perception that Ford cars are not reliable or are expensive to maintain and run. While changing this perception isn’t all that easy, it definitely isn’t impossible too so the automaker should really go for it. 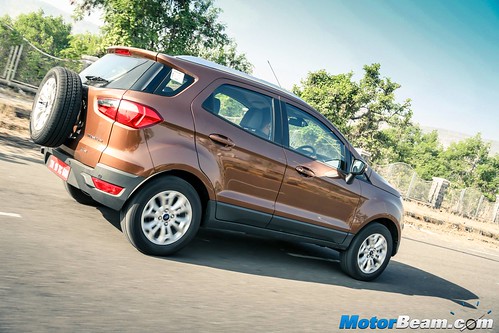 There’s hard to find a fault with the Ford EcoSport

* The exteriors should have got some more changes
* Interiors feel cramped, space is limited at the rear 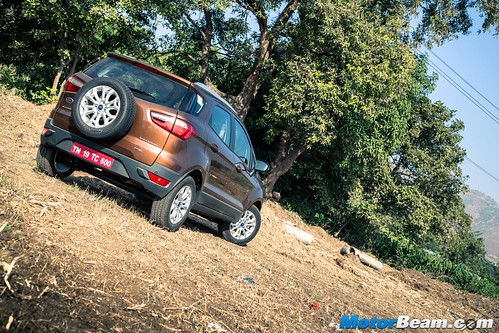 Despite being a compact SUV, it still feels car-like to drive

“It is good to see Ford increasing power on its diesel engine which does make quite a difference in the way the car performs, there is more punch and the diesel powered EcoSport is pretty quick now. Addition of more equipment inside the cabin would have made this update even better.” – Faisal Khan, Editor, MotorBeam.
“The EcoSport facelift just makes the entire package all the more desirable. The bump in power is enough for me to be sold as the previous one did feel a tad down on power. What I really liked is the fact the drivalibity is vastly improved now, especially in the lower gears. The extra features like auto wipers and dimming inside mirror are always welcome. Being an EcoSport owner, I am wondering if there is a way to bump up the power in the older car as this one is quite good fun once you are behind the wheel.” – Javeid Khan, Deputy Editor, MotorBeam.
“I’ve driven the older EcoSport a number of times and always liked the way it drove. The main reason why I really like the EcoSport is because in a crowded city like Mumbai, a compact car makes perfect sense. However, I really wish it came with a rear view camera which would be a boon while parking. Other than that, the engine is fantastic and gives good mileage too. All in all, the EcoSport makes for a really good buy.” – Parth Gohil, Road Tester, MotorBeam.