In December 2014, Honda introduced the CB Unicorn 160 and with the launch, made a commitment of introducing 15 motorcycles for the year 2015. A few of those bikes would be new while others would have just cosmetic upgrades, that too stickers and colours. This list continued till the end of 2015 and Honda got out its 15th bike in December. Now that there were a few new bikes, Honda didn’t have a fair competition in the sports commuter motorcycle segment. Honda worked out properly, did their homework and got one of their best motorcycles till date, the CB Hornet 160R! Though a bit late from the timeline, as it goes, it’s better late than never. We witnessed the launch in Goa followed by a mini test ride for the initial review. But as we rode the bike, it came up with quite some surprises and keeping aside a first ride review, we went down for 650 kms straight and here is our extensive test ride review after 1000 kms on the saddle.

Motor Quest: Honda first introduced the CB Unicorn Dazzler back in 2010, replacing it with the CB Trigger in 2013 and now in 2015, again a new replacement has come in the form of the CB Hornet 160R. 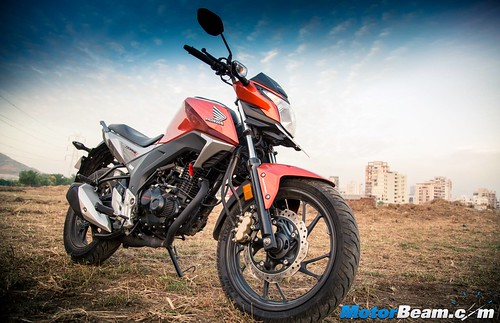 Styling – A first look on the bike via the RevFest and a few glimpses on the road as a camouflaged vehicle gave a thought of a re-worked CB Trigger and CB Unicorn 160 combined. But no, it’s new and something we saw in the CX-01 concept at last year’s Auto Expo! Throughout the design from the front mudguard to the rear tail, everything looks new and fresh. The sharp triangular front headlamp with a similar carved black visor above, covers the all-digital instrument cluster. The headlamp gets a small visor with a few fins in it. The pilot lamps look nice too while the brightness of the headlamp is decent having a wide coverage. The front forks are a bit fat with the fatter tyre on the front and a huge tyre on the rear wheel. The bike gets petal discs for both the front and the rear. 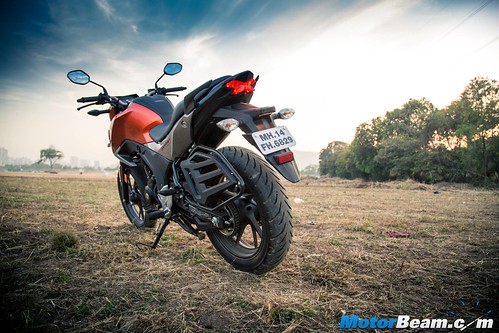 Heavy and tough look gets the rear work done; tail-light stands out

There’s this massive single piece tank shroud on both the sides of the tank which is an actual tank cover. The tank cover gets a carbon fibre lookalike trim piece in the centre and a similar faux carbon fibre body design just below the tank. The beautiful part of this lower piece is that it looks like a perimeter frame and compliments the muscular design from the side. As we come to the rear, the plain silver panel goes all the to the rear grab-rail which is also silver in colour. The best thing about this bike is the rear which holds the X-shaped LED tail-lamp with a black background making it look really raw. The exhaust again is different, with a design from the Honda CBR150R, the short muffler with the silver cover on it looks beautiful and adds to the heavy and sporty look of the rear. 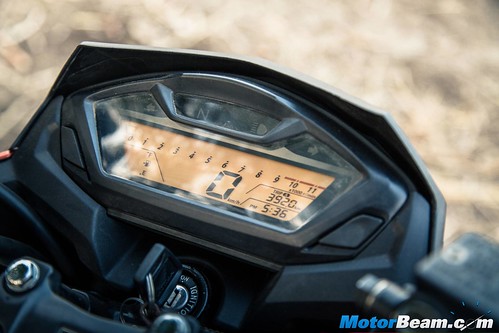 Totally digital cluster displays details clearly; is the same as the Trigger

Instrument Cluster and Switchgear – The instrument cluster stays similar to the CB Unicorn 160 while the switchgear is still the same and very much disappointing as Honda still misses out on an engine kill switch. The instrument cluster displays the details very much clear, yet the reflection from the sun sometimes bothers the view. Though the cluster is placed a bit low, the visibility is good and this also adds to the road visibility. Amber back light on the cluster and a few details like the odometer, tripmeters, tachometer, fuel gauge and time are standard. The switchgear just has a start button on the right and the rest of the switches are on the left. The instrument cluster isn’t new while the dated switchgear is the most disappointing part of the Honda CB Hornet 160R. 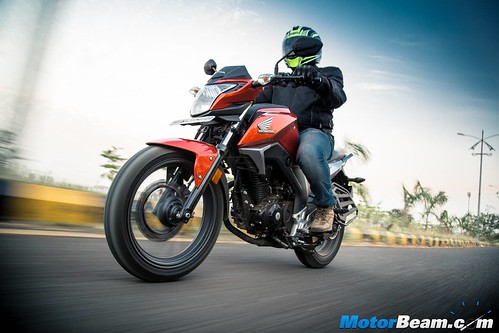 An upright riding posture provides comfort at all times

Ergonomics – The Honda CB Hornet 160R is designed like a sports commuter naked motorcycle and such bikes have a proper upright stance. While the Hornet lives up with that stance, it also provides a straight handlebar and centre set footpegs, giving a proper upright yet relaxed riding posture. The curve of the tank shrouds does fit in a knee properly while the seat provides decent thigh support as it is not that wide. The seats are soft and the footpegs are very much comfortable for the pillion rider too. The single piece seat does provide good comfort to the rider and the pillion is much more than happy to have a seat to sit on as most of its competitors don’t have a great pillion seat. The saree guard is again a beautiful piece as it looks good and does not hinder the pillion in any way. The weight of the bike is felt just the moment a person sits on the bike. 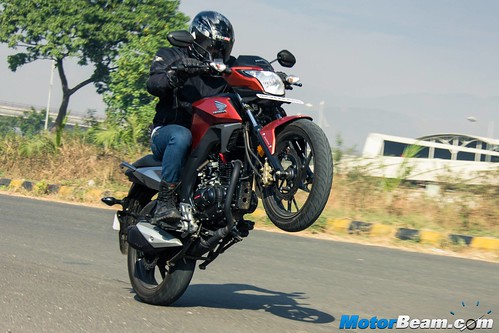 Performance – The 160cc powerplant which has moved from the CB Unicorn 160 to the CB Hornet 160R is the same, while it belts out a bit more power and torque. Shooting 15.6 BHP of power at 8500 RPM while churning 14.7 Nm of torque at 6500 RPM, the engine is much more powerful. The powerband is top-centric making it much more fun when you redline the bike. The Hornet weighs 142 kgs (for the CBS model), making it heavy enough and the fat rear tyre makes the bike slow in the initial rev range. It doesn’t feel peppy at all like the CB Unicorn 160, instead it only feels more powerful as the RPM increases. 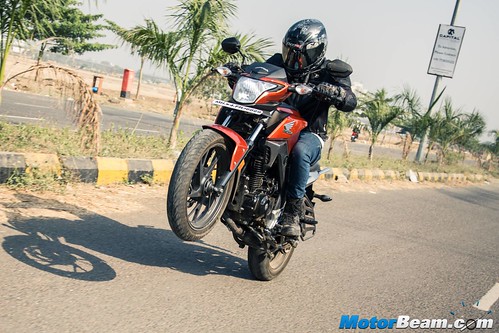 Once post the peak torque which hits at 6500 RPM, the engine goes mad and redlines in no time while here the grippy rear tyre takes on the belted power and makes the motorbike go really fast. The throttle response is quick yet the power is much more in the higher RPM so while taking quick manoeuvres, one needs to shift down and then make the move. The first three gears are pretty tall while the last two are decent enough. As we redline, first gear pulls till 49 km/hr, second till 73 km/hr and third maxes out at 100 km/hr while fourth and fifth help the bike reach the top speed of 119 km/hr. Though Honda claims a top speed of 110 km/hr, the Hornet 160R does reach 119 km/hr effortlessly and also cruises well at 100 km/hr while the RPM meter ticks in at 7500 RPM. The 0-100 km/hr sprint takes 16.36 seconds as per our VBOX tests (with an 80 kg rider on board) which is a tad bit slower than the Honda CB Unicorn 160 (16.15 seconds) of which the fatter rear tyre and late kicking in of power and torque (500 RPM later) is to be blamed. 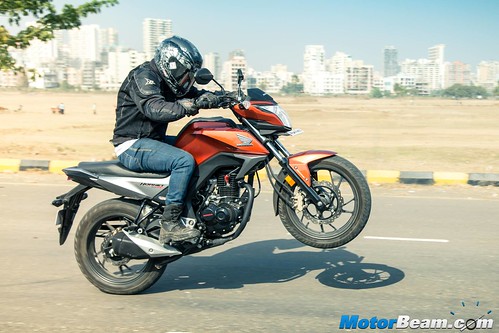 The engine is super smooth and the transmission is quick, the clutch is light while the overall NVH is pretty low. Once post its peak torque band, only a bit of vibes are felt on the footpegs and the handlebar. The refinement of the engine is superb while the sound is also bassy. Honda claims this engine complies with BS-IV norms which go into effect from 2017. With this statement, the engine isn’t just re-worked, there are quite some bits of improvements too. Considering in-gear acceleration, this Honda doesn’t take time to get going. As it is much more rev happy, one might have to compromise on the fuel efficiency to have the actual fun. And so for the ride, we stuck to the fun cruising at three digit speeds and an overall efficiency of 38 km/l is what we achieved. Expect 44 km/l when ridden normally. 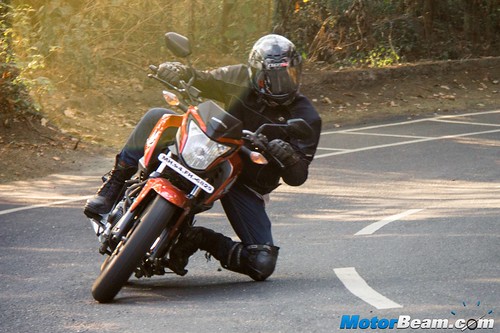 Riding Dynamics – A sports commuter motorcycle with an upright sporty stance is a rare combination from Honda. It came along with the CB Dazzler, then the CB Trigger and now it just grows up with the CB Hornet 160R. The mature stance gives a great upright riding posture while having centre set footpegs, the rider stays comfortable. The handlebar is straight and wide and hence the comfort stays proper while having great control over the motorbike. Though the weight provides high speed stability, it also adds up negatively to the maneuverability in city traffic. Lane filtering is pretty easy due to the stance but again the handlebar is a tad bit wide and will take time to get used to. 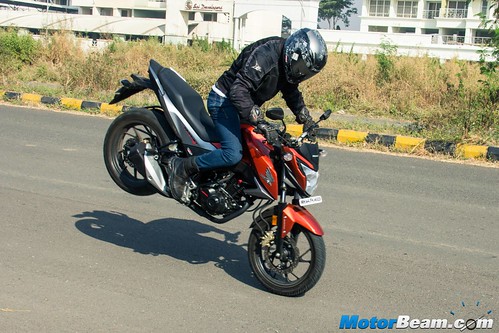 There’s an upside for the Honda CB Hornet 160R as it gets the same set of tyres as the Yamaha R3 (the rear tyre size is the same) but they aren’t radials. Yes, the 100-section front and 140-section rear are both soft compound rubber from MRF. Now cornering on these tyres is a gamer and the CB Hornet rides super stable, making cornering super fun. The soft rear tyre is of the similar width as of its competitors and hence aids in better braking. The CBS system on offer by Honda is the best again, with 3-pot callipers in the front and a single-pot calliper at the rear while the bike gets both wave discs at the front and rear. This makes it stop very quickly. The standard variant though gets only front disc brakes with normal 2-pot callipers and drum brakes at the rear. Our test bike was the CBS variant and we were very much impressed with the astonishing braking performance. 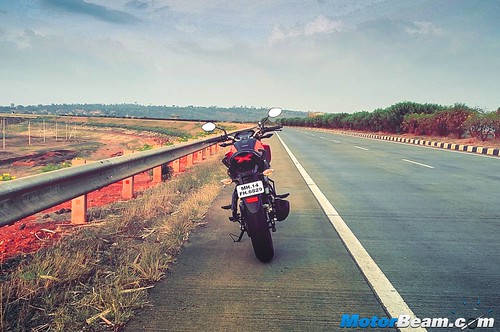 Verdict – Honda has finally, after a long time, worked their way to attract young customers by offering a sporty commuter naked motorcycle, the CB Hornet 160R. The bike boasts of quite some features though it misses out on basic things like an engine kill switch and DC electricals. Although it is priced at a slight premium over its chief rival, the Hornet still turns out to be the best sports commuter under Rs. 1 lakh. The refinement of the Honda engine and the hardware onboard makes the 160R a real fun machine and thus Honda offers another promising motorcycle.

A few shortcomings but the Honda CB Hornet 160R makes its way like a boss with the bulkiest look and the most powerful engine in its segment along with the hardware on offer that only a few of its rivals provide. 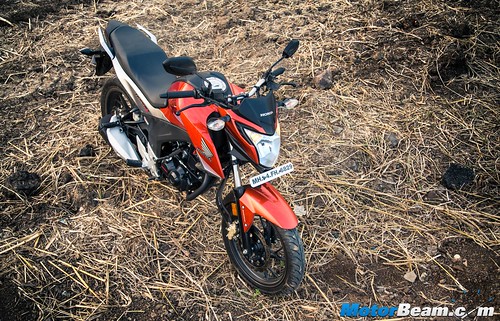 Edgy looks and powerful heart, the CB Hornet 160R can steal a show 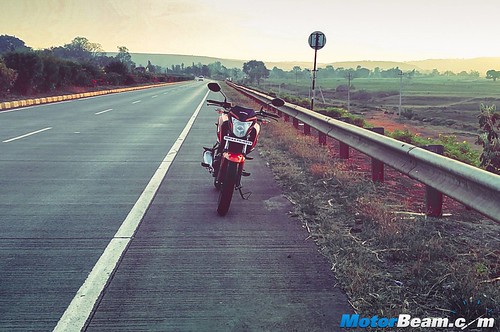 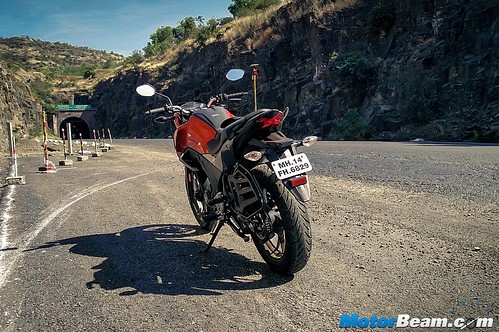 “The Dazzler was a good bike, the Trigger was even better and the Hornet 160R is not only better than its predecessors but finally strikes the right visual chord. The seating position is good and the bike doesn’t feel commuter-ish like the previous 150cc Hondas. What is praiseworthy is the top-end power and the fantabulous refinement of that Honda mill. The most impressive aspect of the CB Hornet 160R is without doubt the grippy tyres and the fantastic brakes.” – Faisal Khan, Editor, MotorBeam.
“Fast on the highway, grippy around the corners and controlled in traffic, the Honda CB Hornet 160R does all its jobs to perfection. Nothing less was needed and the CBS system just added extra cheese to the perfect pizza! The Hornet is a gem and a total gamer ticking most of the boxes and competing well in the segment. Honda has made a very impressive motorcycle which isn’t trying to be something it’s not, this motorcycle is outright sporty.” – Dhanil Vira, Road Tester, MotorBeam.
“Despite the relaxed seating stance on the CB Hornet, the tyres inspire enough confidence in corners, while the braking is just icing on the cake. The additional power kicking in after 6000 RPM facilitates faster corner exits as well. The high handlebar does affect the handling of the bike, but the bike is really comfortable for long rides. This, in addition to the tall gearing and good mid-range torque makes the 160R a very good highway machine.” – Adwait Babras, Road Tester, MotorBeam.