The Mercedes GLS350d excels in space, comfort, efficiency & proves to be a nice cruiser

Mercedes-Benz has started following a new nomenclature for its vehicles. The ML is now called the GLE, which means that the GLE is a mid-size SUV. For the entry level SUV market, Mercedes has the GLA, which is based on the A-Class. For the top spectrum of the market, the Stuttgart-based automaker has been offering the GL-Class which has now been renamed to GLS following a minor mid-life facelift. Mercedes claims that the GLS is the S-Class of SUVs. Now, we know that the S-Class is easily one of the best cars in this world, but is the GLS equally good? Let’s have a look.

Motor Quest: Mercedes has been going all out in the Indian automotive market and has been launching a lot of updated as well as new products at regular intervals. The GLS isn’t much different than the outgoing GL except the new gearbox but the minor cosmetic tweaks make it a fresher package. 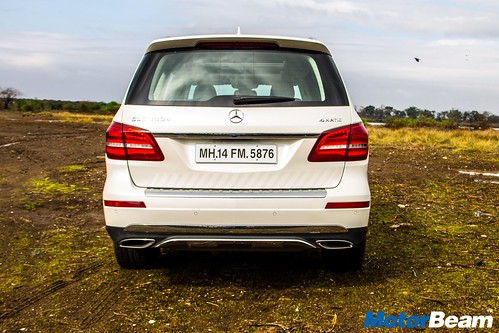 Not much changes on the outside except minor tweaks

Exteriors – The Mercedes GLS features a very masculine and imposing stance and the styling remains very similar in this facelifted model. At the front, you get a new set of headlights along with a redesigned grille. The bumper also gets a tweaked design along with some chrome additions. The side profile doesn’t seem to have any noticeable changes while the rear is also largely the same with only minor changes like LED tail lamps, chrome garnishes, etc. However, the GLS now looks much better than the pre-facelift GL and the design feels complete now. 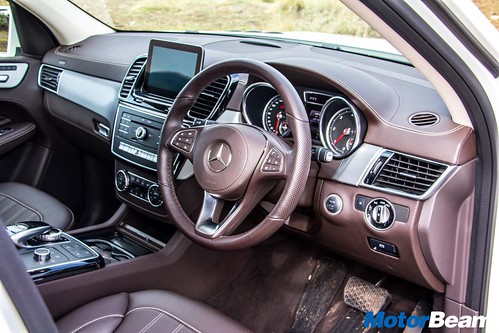 Interiors – Things are similar on the inside too. A lot of components have been carried over from the outgoing GL and even the dashboard and centre console retain a similar layout. You do get a new pop-out screen in place of the older screen which came fitted in the centre console. The updated infotainment system also comes with the latest version of COMAND. You also get a touch pad on the centre console. Apart from these, there are some minor changes to the interiors while everything else remains the same. Space is enormous and this is one of the few cars that can actually seat 7 people properly. 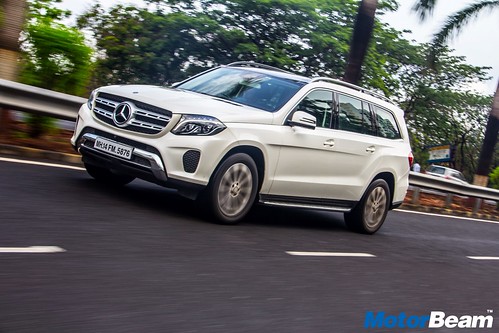 Performance – The Mercedes GLS is offered in only one guise – the GLS350d. It is the same 3.0-litre V6 diesel engine that was offered on the previous version too. The oil-burner pumps out 258 HP of power and 620 Nm of torque but what has changed is the fact that the engine is now coupled to a new 9G-TRONIC automatic transmission instead of the earlier 7-speed unit. The brute touches 100 km/hr from standstill in 8.3 seconds which is quick enough for an SUV of this size. 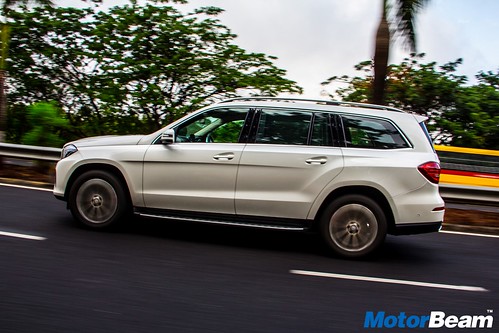 The engine has good enough grunt for regular driving but the oil-burner itself sounds a bit coarse and feels rough at higher RPMs. Torque delivery at lower RPMs is good while the mid range also has a pretty good power band. The GLS never feels out of steam and even if you want to push the vehicle, the SUV won’t disappoint at all. You get the usual driving modes like Eco, Comfort, Individual and Sport. In Sport mode, the SUV moves with much more urgency and even the steering and suspension feel tightened up. 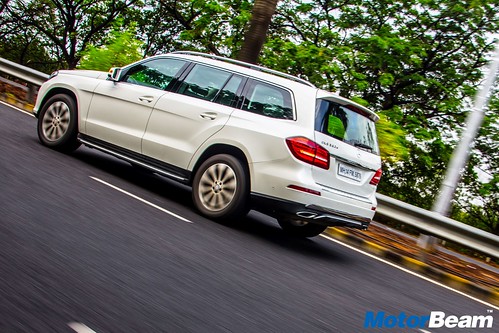 The 9G-TRONIC gearbox feels much better than the older unit

Talking about the new gearbox, it certainly is very smooth and decently quick in shifting cogs. Gear shifts happen a notch above the 1500 RPM mark under normal driving conditions. In city conditions, sometimes the transmission feels confused while choosing the correct cog. It even makes the GLS a very good cruiser with 100 km/hr coming up at 1400 RPM in top gear. We managed to extract a fuel efficiency figure of 8-9 km/l under mixed driving conditions. 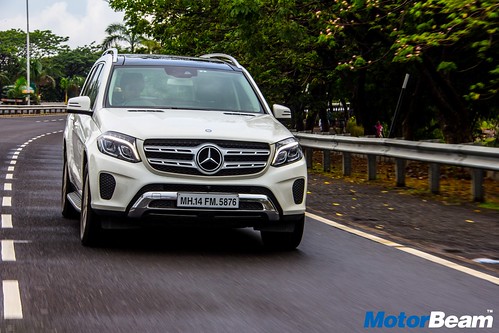 Driving Dynamics – The Mercedes GLS comes with an AIRMATIC suspension which helps the brute deliver a good ride experience. The vehicle absorbs most bumps and undulations without much fuss and passengers don’t feel discomforted at all. Handling is neutral and the GLS feels like a true blue SUV with all its body roll. The steering, however, provides good feedback and has a nice feel. Even the brakes do their job properly and shed speeds without breaking into a sweat. 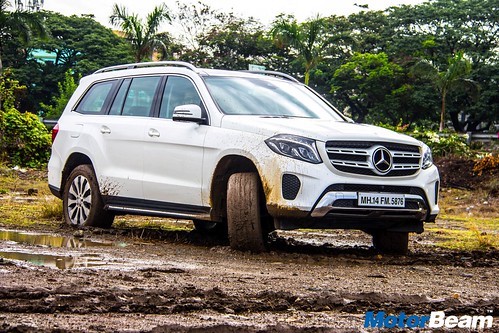 Safety and After Sales Service – The GLS comes with a plethora of safety features such as Adaptive High Beam Assist Plus, Crosswind Assist, Attention Assist, PRE-Safe, 8 airbags, Downhill Speed Regulation, 360-degree camera parking package, etc. Talking about after-sales service, we’ve said it a number of times that Mercedes excellent service among premium automakers and their service network is also widely spread across the country. 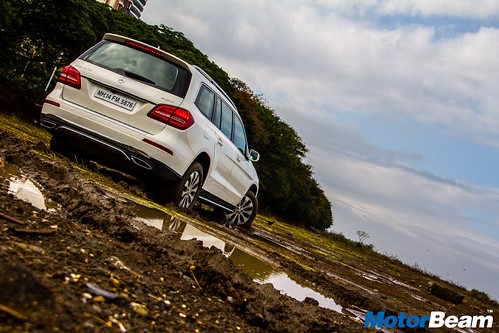 Verdict – The Mercedes GLS is certainly the biggest SUV in its segment and offers oodles of space along with a good engine and gearbox combo and plenty of features to play with. However, something seems to be missing as the GLS certainly doesn’t feel like the S-Class of SUVs. Mercedes has crafted the vehicle nicely but it seems to be missing a ‘wow’ factor that doesn’t make you feel as special as it should, especially when compared to newer rivals like the Audi Q7 and Volvo XC90. If your priorities are space, comfort and road presence, the Mercedes GLS is a certainly a good choice in the full size luxury SUV segment. 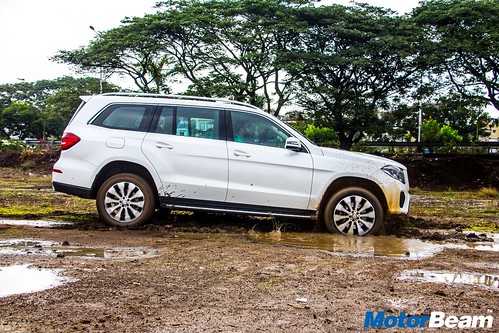 What’s missing is that special feeling which the new Q7 and XC90 offer! 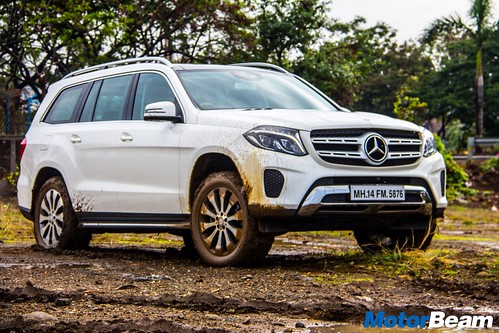 Is the GLS really the S-Class of SUVs? Well…

“Mercedes is on a renaming spree with its SUVs, the GL now being called GLS as it is the S-Class of SUVs, as claimed by the company. But is it? Of course not. There is nothing S-Class about the GLS, at least not the technology, luxury or performance, the latter most can be attributed to weight. Still, this Mercedes offers a lot of practicality with tons of space, comfort and off-road ability.” – Faisal Khan, Editor, MotorBeam.
“I liked the GLS only for its cruising abilities as well as the space and comfort it offers. Mercedes has used top notch materials everywhere but the GLS certainly misses out on that special feeling which the Audi Q7 and Volvo XC90 offer. If I had to buy an SUV from this segment, I’d pick something else if not wait for the next generation GLS to arrive in the market. ” – Parth Gohil, Senior Road Tester, MotorBeam.