The Brutale 1090 is the most powerful naked bike from Italy’s MV Agusta, it’s a mad machine

It all started with the movie ‘The Matrix Reloaded’ in 2003 where the MV Agusta F4 was ridden in an action sequence and from that day the name Agusta was stuck in my head as my dream superbike. This was 13 years ago and now MV Agusta has hit Indian shores, thanks to its partnership with the Kinetic Group. Last month we had the chance to ride the Brutale 1090, a naked version of the F4. One of the two inline-four motorcycles available from the MV Agusta line-up. Though the ride was just for a day, I couldn’t explore the Brutale to the core but I could know the bike very well as it happened to be my childhood dream of riding one. 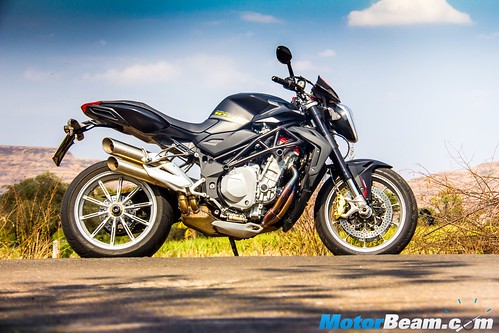 The Italian design of the Brutale is simple yet beautiful

Styling – The MV Agusta Brutale 1090 is one of the best looking naked motorcycles. It originates from Italy and hence is intricately detailed. To start off with, the all-black colour stands out bold while the off-white finish on the engine block with the shiny exhausts look outstanding. The 10-spoke light-weight alloy wheels share the same colour of the engine and look brilliant. The single sided swingarm holds the rear wheel with a bright noticeable mono-shock. Coming back to its heart, while the engine block stays off-white, the engine head gets a red colour, all of which is hidden under the all-black trellis frame. The shiny exhausts which come out from the front go in the form of 4 into 1 and again split into two thin end-cans coming right near the upper-half of the rear alloy. 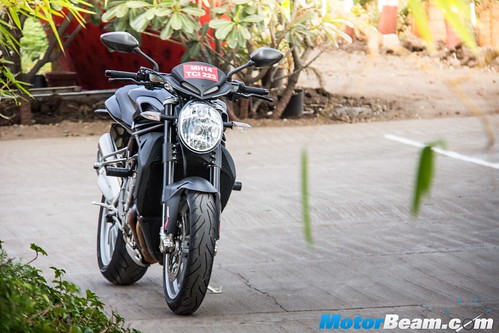 Take a look from the front, the design makes the bike look very sleek

As we shift to the upper half of the motorcycle, everything is either in matte or shiny and black. The radiator covers the front while the tank gets 2 stickers, one for the brand MV Agusta and other for the bike as 1090 Brutale. The headlamp on the front is an oval unit with an integrated pilot lamp. There is a small visor just on top of the headlamp covering the console which gets a pair of LED DRLs which aren’t actually noticeable in daylight. The seat is a single unit and as we come to the rear, the split tail-lamps with a chunky tail unit make it look much healthier. The tail ends with a number plate holder while it looks much better as a street-fighter without it. 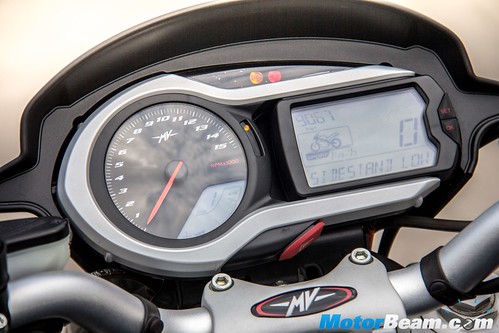 Simplistic design yet the console has quite some features

Instrument Cluster and Switchgear – The Brutale 1090 gets an instrument cluster which is an analog-digital unit – the analog part being the tachometer and rest being digital. The digital portion is divided into two different pieces, one displaying the gear indicator and the fuel gauge while the other containing rest of the information like the speedometer, odometer, ABS, traction mode details and lots of other details which we see in regular motorcycles. The instrument cluster didn’t impress me much and it took me quite some time to get accustomed to it. The switchgear had a black piano finish and it was easy to use. There were very few buttons unlike other Italian superbikes, to fiddle around with the modes and electronics. 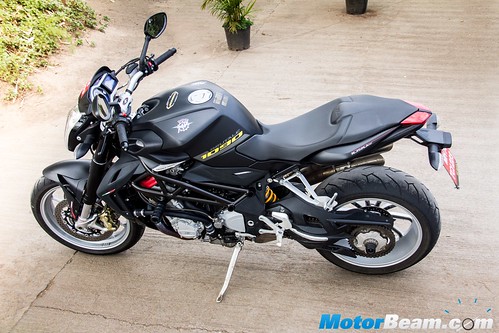 Ergonomics – The Brutale had just the right kind of ergonomics that every street-fighter motorcycle should have. The first time I hopped onto the bike, it felt sleek and comfortable. Although the seat is a bit high at 825 mm, the single piece handle bar adds up to the comfort. For my height I was tip-toeing sometimes but it was rather easy to rest my leg on the raised and rear-set footpegs. The seat was soft and comfortable and the bike seemed easy because the tank scoop was just perfect. I wasn’t just sitting on the bike, it felt as if I were a part of the bike. The engine being an inline-four kept it wide at the front while for the rider everything was sleek, comfortable and relaxed. The seat being a single piece was an advantage as it was wide and comfortable for the pillion with footpegs at the perfect position. 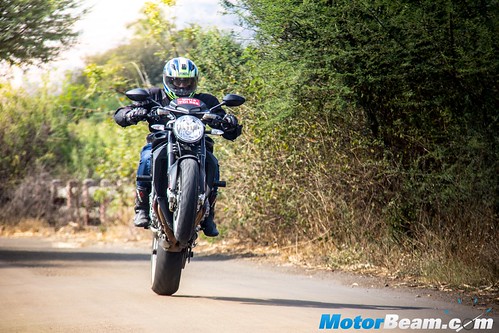 Lightweight and powerful, performance is just under that twist of throttle

Performance – The Magneti Marelli IAW 5SM ignition integrated system with Mikuni throttle body feeding the inline-four engine of the MV Agusta Brutale 1090 pops out a whopping 144 BHP of power at 10,300 RPM and 112 Nm of torque at 8100 RPM. As we see these numbers, this is one of the least powerful of the Brutale line-up itself. This engine runs on four modes and has eight level of adjustable traction control. Though it was tough to get through the traction modes, the power modes were a lot easier and helpful. In the normal mode, the bike acts like a normal litre class motorcycle while the sports mode makes it go brutal to an extent, it wants to ride on one wheel as we hit the redline. The redline starts from 11,000 RPM but the Brutale doesn’t mind until 12,500 RPM. There were two more modes rain and custom which we weren’t keen on as the sports mode had us blown away. 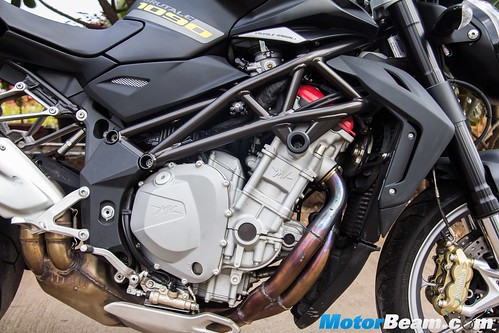 Speaking of redline, the NVH also comes into picture. The Brutale is one of the smoothest liter class street-fighters I have ridden till date. As far as the sound goes, the exhaust note is sweet at the initial stage but as the bike crosses triple digit speeds, the beautiful inline-four sound vanishes and the wind noise gets into the helmet. The vibrations were minimal and there was no harshness from the engine at all. The engine was brutal to the throttle response. Even though there’s no ride-by-wire, a good throttle control helped a lot to get the most out of this motorcycle. 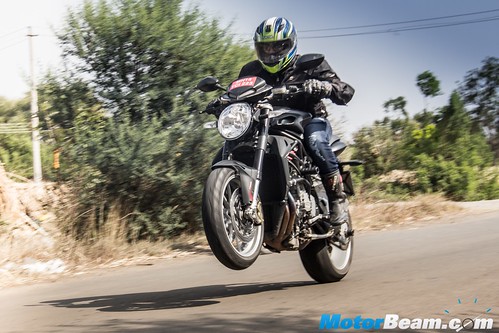 Liter class engines are one of the thirstiest, and the MV Agusta Brutale 1090 has the one that delivers amazing performance but at the cost of heavy fuel consumption. An overall 12 km/l was achieved. It could have been better but riding a Brutale in sports mode was totally worth it. Hitting the ton can be done in less than 3.5 seconds. Once you begin riding the Brutale with three gears still remaining, you realise you’re already hitting the second ton! The bike has a top speed of 265 km/hr while reaching something around 220 km/hr isn’t a big deal. Crossing that number can scare you. And for a change, if you feel like cruising at a steady 100 km/hr, the tachometer stays a notch below 5500 RPM. The gearbox is crisp and shifts in a perfect manner. 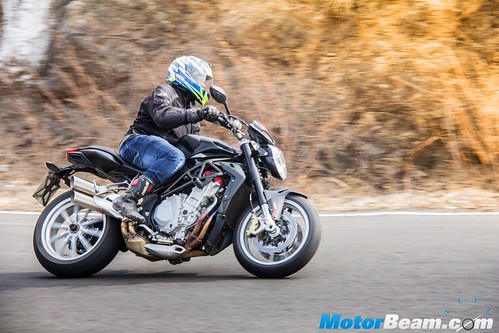 The Brutale 1090 is one good corner craving machine

Riding Dynamics – Riding an MV Agusta is like riding an angry Italian horse who’s in control of the rider. Once this angry horse is set loose, it’s enough to scare the rider. The power figures of the MV Agusta Brutale 1090 feel understated. There’s so much potential and fun, only a petrolhead would understand. The Brutale has the ergonomics of a street-fighter and the sleekness of a fast bike with a straight handlebar and an upright riding position with a slightly committed posture. This perfect mixture with the USD forks in the front and Sachs monoshock at the rear and nothing but grippy Pirelli tyres sum up to a street-fighter that can scorch the roads and wouldn’t mind being ridden on a race track. 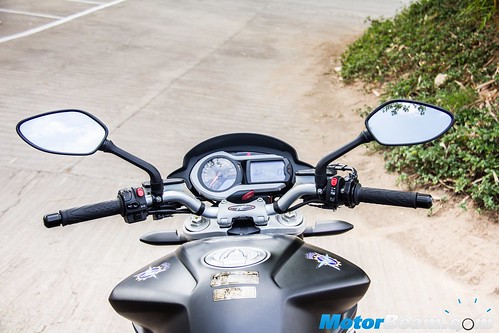 Comfortable handlebar but no windscreen, windblast can hold you back

The Brutale weighs 183 kgs (dry) and the hardware it gets makes it much more appealing. Cornering is fun but taking the Brutale out on the straights is much more awesome. Maneuvering through traffic is almost as easy as riding a 200cc street-fighter but with much more power. The normal riding mode does feel smooth with a good throttle response while the sports mode makes the throttle snatchy and every time you hit the redline, the front wheel lifts even with maximum traction control. The suspension setup is considerably softer and hence makes for good ride quality on Indian roads. The rain mode is basically for maximum traction while custom is like bake-your-cake mode for the rider. 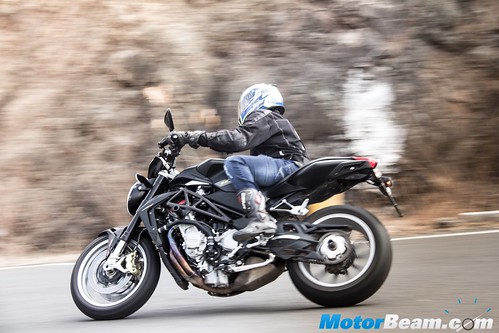 The Brutale is the easiest liter-class motorcycle one can ride

Bosch ABS with RLM (Rear wheel Lift Mitigation) along with Nissin brakes make sure the bike stops even on the worst of roads. There are no modes for the ABS, but the brakes are sharp and perfect. The footpegs can be a bit of a concern as their size is small and very much close to the frame making it sleek but difficult for a first timer. The raised rearset footpegs do inspire a lot of confidence and make the bike easy to flick around on the road. This is the first litre class street-fighter that has perfect riding dynamics which make it really easy to ride. 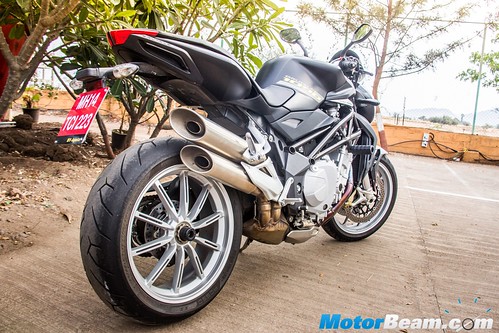 The single-side swingarm and exhaust do compliment the character

Verdict – The MV Agusta Brutale 1090 is a masterpiece from the Italian manufacturer. The CBU route to India isn’t really the best for what you get at Rs. 20 lakhs. The bike holds a good presence with what it offers but this one isn’t the latest of all. For those who would like to fulfil their childhood dream (like me), it is now possible. MV Agusta is so desirable that even the Chairman of DSK Benelli got himself an MV Agusta F4 RR. This Italian brand will take its time to grow in India. Some people in our country desire having something exclusive and this Italian brand would surely fulfil that want.

The MV Agusta Brutale 1090 dates back to 2014, yet has its own lineup and the appeal to attract customers. It is nothing less than an eye candy with a beautiful and a simple design while being totally brutal from within. 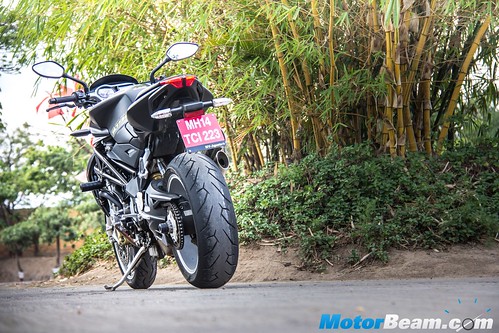 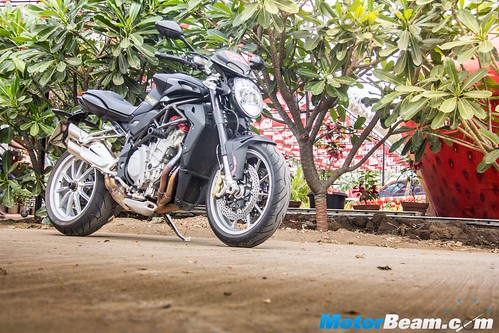 Less body work and more of mechanical bits, a petrohead love for bikes 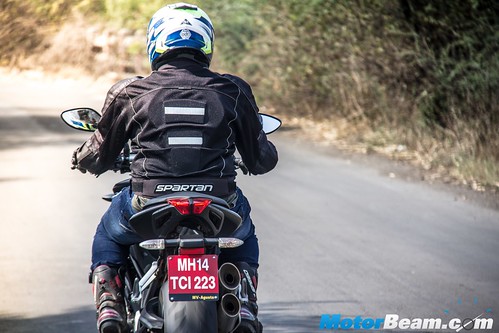 “The MV Agusta 1090 is not a motorcycle, it’s art with a rocket of a motor strapped onto it. The acceleration is brutal (like the name suggests) and unforgiving, one wheel antics are out of the rider’s control, you throttle and bang it reciprocates with a sudden wheelie. This motorcycle might not be the best in class but surely pulls at your heartstrings like no other litre-class naked bike. It’s an Italian beast, it’s an MV after all.” – Faisal Khan, Editor, MotorBeam.
“The MV Agusta Brutale 1090 is a beautiful machine to consider for a litre-class motorcycle. There are some things like the instrument cluster and the rear suspension setup which doesn’t feel up to the mark but the simplicity of the motorcycle just grabs the show. MV Agusta being my dream bike proved to be faithful and I was amazed by the way it rode. Comfortable for touring yet sporty for doing something out of the box, the Brutale 1090, even after being costly, is a machine I would admire endlessly.” – Dhanil Vira, Road Tester, MotorBeam.
“Being a street-fighter, the MV Agusta Brutale 1090 really impressed me. Despite having street-fighter like riding dynamics, it felt equally comfortable on the highway. The engine is rightly tuned for that sporty feel without compromising on practicality. While it doesn’t have as much electronics compared to its competition, the Brutale still manages to keep up with modern bikes in terms of electronic sophistication. ” – Adwait Babras, Road Tester, MotorBeam. 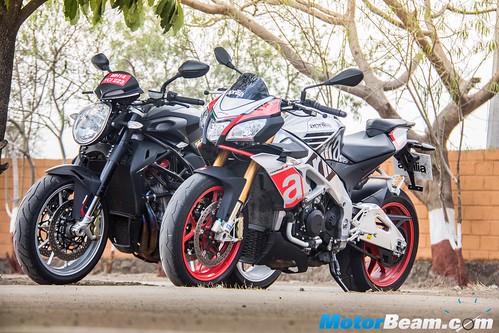 Two mad machines from the same origin yet very different