If time has taught us something, it’s that you don’t need a great product to rule the 100cc commuter space, what you need is a brand. TVS seems to have taken sometime to understand this because the fantastic Star City hasn’t managed to sell in as good numbers as it deserves to (under 15,000 units sold last month). This segment is led by a very strong brand, Hero’s Splendor and the Hosur based company has figured it out, that it needs a strong brand to impress first time bike buyers who give more weightage to trust than technology. Time to re-spawn the Victor then, after 9 long years.

Motor Quest: The Victor brand name gained a lot of popularity in India but was discontinued in 2007. TVS has brought back the nameplate as it is very popular with commuters. 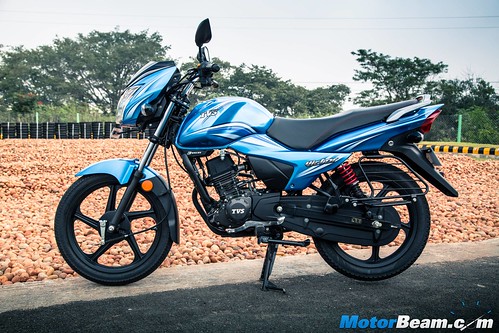 Styling – Other than the name, the TVS Victor has little in common with the old model and the design is similar to the Star City but the motorcycle gets a better looking headlight with a powerful 55W bulb. The styling of the Victor won’t make you stop and give it a second glance, it’s conservative and doesn’t stand out from the slew of bikes in this entry level segment. There is of course some interesting graphics which do look good. The motorbike does get a 3D emblem for both the TVS and Victor badges. The big tail light is decent and the overall styling is simple and fuss free. 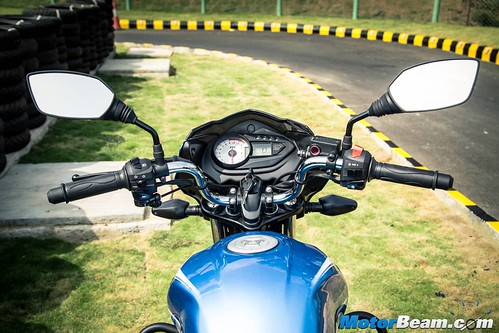 Instrument Cluster and Switchgear – The TVS Victor uses an analogue digital instrument cluster and there is a tachometer too which is a rare sight in this segment. The speedometer, trip meter (two of them but there is only one button to switch and reset), odometer and fuel meter are all digital readouts and although the fonts aren’t that big, it’s still legible. The motorcucle gets good switchgear with piano black touches on the buttons. What is unique and a segment first is the hazard light switch that is placed in position of the engine kill switch. 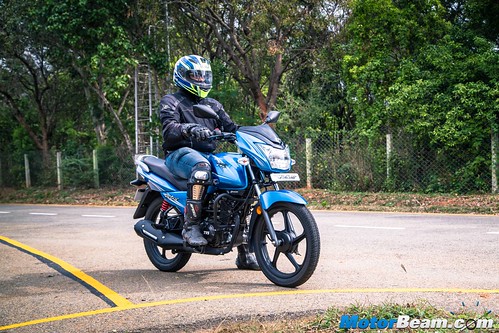 Ergonomics – This is a commuter motorcycle so the formula of an upright riding position, long and roomy seat is a given. The Victor has a similar riding position as the Star City with a soft seat and good pillion comfort. The footpegs are set for comfort for both the rider and pillion. The tank is thin and it’s all very stress free on this motorcycle. The mirrors too offer a good view of what’s behind. Quality of everything feels good and the Victor feels well put-together. 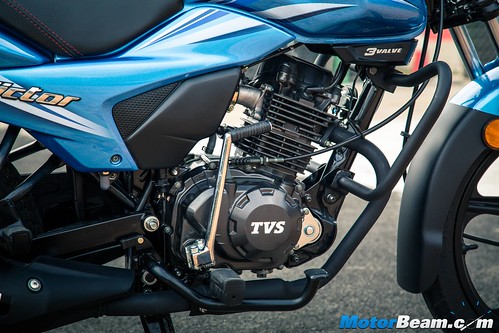 Performance – TVS has used the same engine on the Victor which powers the Star City but gets some changes to improve output, refinement and efficiency. The 109.7cc 3-valve EcoThrust motor in the Victor gets a CV carb and spring loaded rocker arm. It now belts out 9.5 BHP at 7500 RPM and 9.4 Nm at 6000 RPM. Many were expecting a 125cc engine on the resurrected Victor but TVS has gone ahead with a 110cc unit, it also uses a 4-speed gearbox, same as the Star City with decent shift quality. The engine is very smooth and feels refined at idle but initial response is just about ok, the TVS Victor getting some punch post 4000 RPM, the pull lasting till 8000 RPM. 0-60 km/hr comes up in a claimed 7.2 seconds while fuel efficiency is claimed to be 76 km/l. 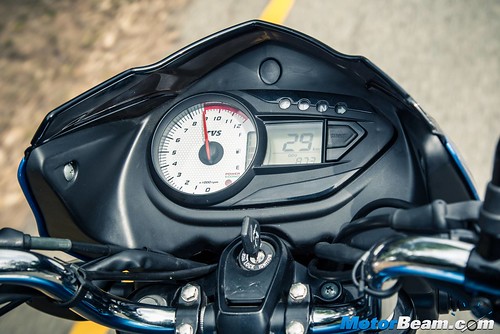 The redline on the TVS Victor is marked at 9000 RPM but the rev limit only engages at 10,000 RPM. The motorcycle does 33 km/hr in first gear, 62 km/hr in second gear, 80 km/hr in third gear and 104 km/hr in top gear which is also the top speed. Vibrations kick in post 5000 RPM and become exponentially high near the redline. The exhaust on the motorcycle is bassy and sounds good by commuter standards. The Victor’s engine has sufficient performance for a 110cc machine. 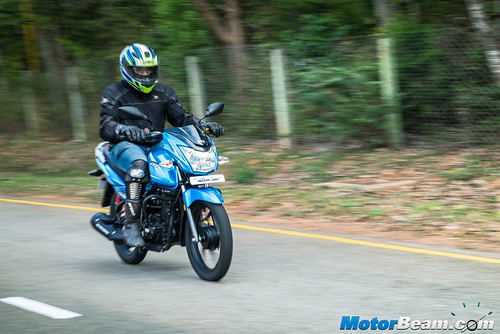 A fun commuter bike to ride, the Victor is a confident machine

Riding Dynamics – The TVS Victor has a decent ride quality, the front suspension has comparatively less travel while the rear is good. Going fast over bumps doesn’t unsettle the bike but the stiffness can be felt. There is the Star City feel on the handlebar and handling is very good with the low 112 kgs kerb weight, the Victor feeling light and agile, requiring less of an effort for quick turns. There is decent grip on offer too. The company is offering a front wave disc variant as well which is a rarity in the segment, it gives superb feedback while the drum variant has a spongy feel. Stopping power is very good on the Victor. The disc brake variant is more expensive and thus gets TVS Remora tyres while the drum variant gets inferior Duramax rubber. The 175 mm ground clearance is also ample for Indian roads. 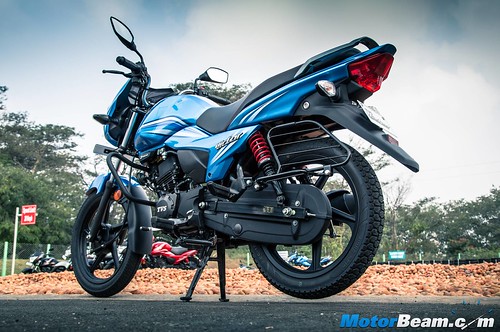 The TVS Victor makes for a well engineered commuter bike

Verdict – The TVS Victor has a strong image in the market and the Hosur based manufacturer wants to capitalize on the same by re-launching the ‘More Smiles Per Hour’ brand. It doesn’t stand out from the crowd but does get some unique features which are sure to attract those who are looking for something more from their commuter. Back by TVS’ solid engineering, the Victor performs well on the road with good performance, handling and quality. It’s also high on comfort and efficiency, making it a great alternative to its mundane rivals.

The TVS Victor has a nice and smooth engine which has ample city performance. The motorcycle offers easy handling and good brakes, making it an excellent commuter bike in the 110cc segment. 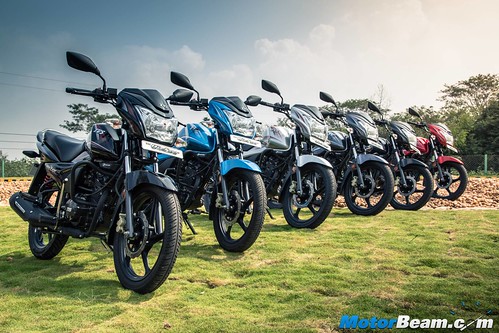 The Victor brand is back but could have offered some more