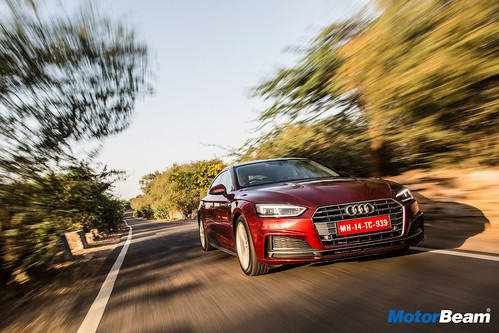 The familiar 2.0-litre TDI engine is offered in the higher 190 HP tune

Performance – The Audi A5 Sportback in India comes with only a diesel engine. This TDI mill is the familiar 2.0-litre unit that we’ve seen on many VAG cars. Offered in the higher 190 PS/400 Nm tune, the oil burner is powerful enough for the A5 and makes the Sportback drive with quite a lot of urgency. The engine has some clatter which is audible outside while the insulation in the cabin is extremely good and thus the clatter isn’t really heard inside. The powerplant feels responsive right from lower RPMs with turbo lag being not much of a concern. As the revs increase, power delivery feels swift and progressive and the car touches triple digit speeds in no time, with 0-100 km/hr coming up in a claimed 7.9 seconds. 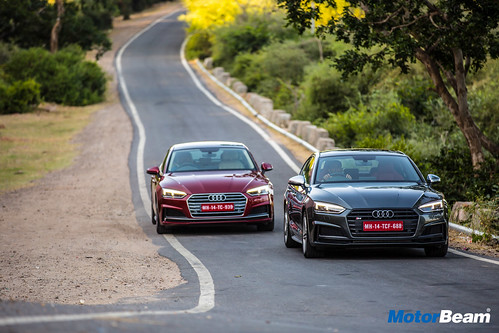 While the A5 is FWD, the S5 is AWD with quattro as standard

Both the engines are grunty and power-packed; exhaust on S5 sounds sweet

The diesel engine has good surge till 4500 RPM and due to the huge amount of torque on offer, it never really feels out of breath. The cherry on the cake is that the diesel mill is pretty efficient too, and you can easily get a respectable fuel economy of 10-12 km/l which is good for a car this powerful and heavy. The TDI engine comes mated to a 7-speed transmission with power being sent out to the front wheels. The transmission is smooth in its shifts and there are no complaints on this front. You also get the usual driving modes via Audi Drive Select while the gearbox comes with Sport and Manual modes too. 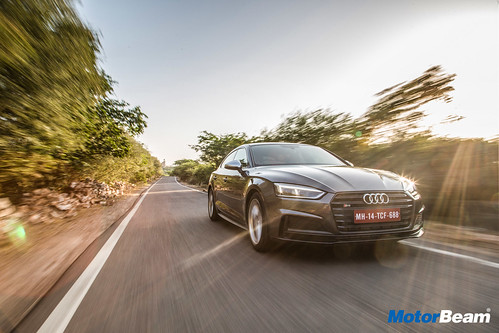 The V6 engine makes the S5 super fun to drive

The Audi S5, on the other hand, comes with a very meaty 3.0-litre V6 TFSI petrol engine. The drivetrain is good for 350 horses and the Ingolstadt-based manufacturer is also offering quattro as standard on the S5. Moreover, the gasoline motor gets an 8-speed transmission. Right from the word go, the TFSI unit feels sharp when it comes to throttle response and the car picks up pace so quickly, that 0-100 km/hr comes up in a claimed 4.79 seconds which is just brilliant. The powertrain doesn’t really have a dead spot in the rev band and goes freely all the way to 6500 RPM. The exhaust also sounds sweet and reminds you that you’re driving a performance car. The gearbox, again, is well-matched to the engine and thus does a very good job of transferring all that power and torque to the wheels. 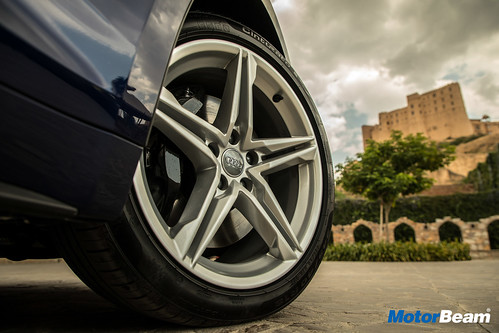 The S5 has a slightly sportier ride than the A5

Driving Dynamics – The ride quality on both the cars is very good and feels comfortable over slow to medium speeds. Obviously, you need to go really slow over potholes but the suspension tackles them without much sweat. Though, if you tend to go fast over broken surfaces, there is a tendency to thud. At high speeds, both the A5 and the S5 feel very planted and passenger comfort is indeed good, though I personally found the ride on the S5 a bit stiffer compared to its diesel counterpart. Ground clearance is an issue though, especially when you encounter poorly-designed speed breakers on the B-roads of our country, and the situation is worse when the car is fully-loaded with passengers. 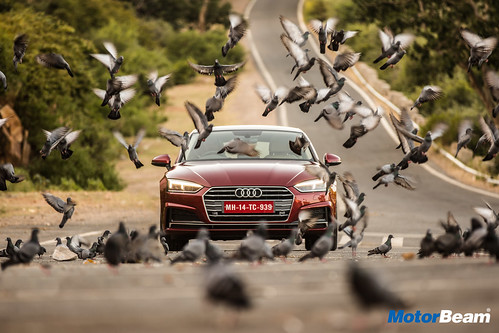 The A5 and S5 are targeted towards the driver in you

Just like many other Audis, the steering does lack some amount of feel, though the unit on the S5 seemed to be giving better feedback. Body control is fantastic and never does the car feel like it lacks confidence. With quattro on offer, the S5 feels even more composed around the corners while the A5 has a tendency to slide out. However, both the cars offer a sporty driving impression. The cars get disc brakes, with the front ones being ventilated and braking power is stupendous. The 245-section tyres also offer very good levels of grip.