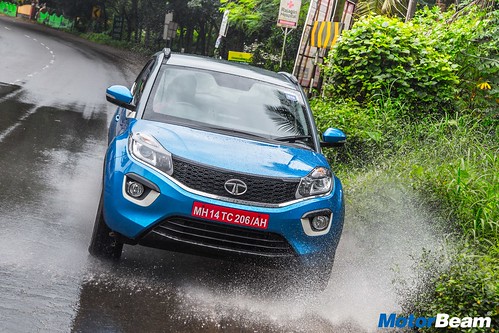 Performance – The Tata Nexon is offered with both petrol and diesel engines. The petrol engine is a 1.2-litre, 3-cylinder, Revotron unit churning out 110 horses and 170 Nm. It is a new engine with an aluminium block unlike the Zest which had an iron block. I was really looking forward to testing this engine but came out disappointed. The first thing that I noticed while driving in the city is that it lacks low-end power and the car just feels too unresponsive at the lower RPM spectrum. In fact, drivability in the city is so poor that you get tired revving and downshifting the car all the time. It is only after 2500 RPM that you feel some sort of power and that increases post 3500 RPM, with most of the action saved for the higher RPMs. 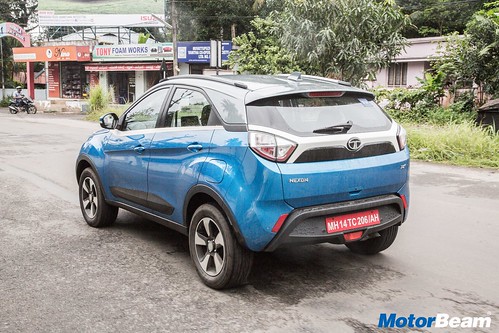 The petrol engine is a let down in power delivery

Both the engines get 3 driving modes – Eco, City & Sport, no AMT on offer

On the highways, if you want to just cruise down, you won’t complain much about the petrol engine but if you intend to drive aggressively, you better look elsewhere. On steep climbs, the car struggles to gain pace even in 1st gear. This engine is very refined though and hardly any vibrations creep inside the cabin. It gets a bit noisy after 3500 RPM though. On the fuel efficiency front, the MID on our car was showing 8 km/l after slight aggressive driving but you can expect 10-12 km/l under regular usage. There are 3 drive modes – City, Eco and Sport. The latter mode is good but again you just can’t feel that this is a 110 HP engine. In Eco mode, the car feels absolutely sluggish while City mode is just about average. 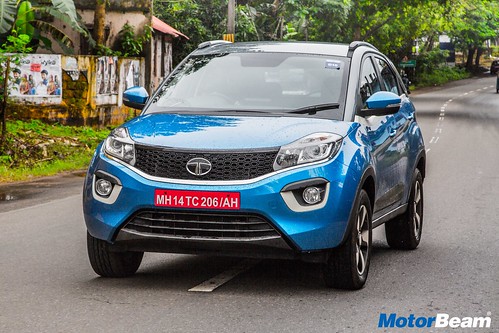 The diesel engine has good tuning on offer

The diesel engine is something that’s impressive. The 1.5-litre, 4-cylinder unit churns out 110 horses too, along with 260 Nm of twist. NVH and clatter isn’t all that bad at low RPMs and the engine gets noisy only after 3000 RPM or so. There is obviously some turbo lag below 1800 RPM but even then, the low-end is actually good, way better than the petrol engine. The mid-range has good power delivery till 4000 RPM but the turbo kick isn’t as strong and sudden as, say in the Maruti Vitara Brezza, but much more linear. The oil-burner also gets the same 3 driving modes, where Sport mode is the best one. Eco is pretty average while City mode will be sufficient for those drive sedately. Fuel efficiency ranges from 15-19 km/l and Eco mode gives you a very small rise in mileage, in fact driving in Sport mode also gets you pretty good efficiency. Both the engines are mated to a 6-speed manual gearbox. The clutch is very light, as expected from a Tata car. The gear shifts aren’t very notchy but not the slickest either. The throws are very long and thus they rob off some driving pleasure. Tata Motors is expected to offer an AMT 2018 onwards. 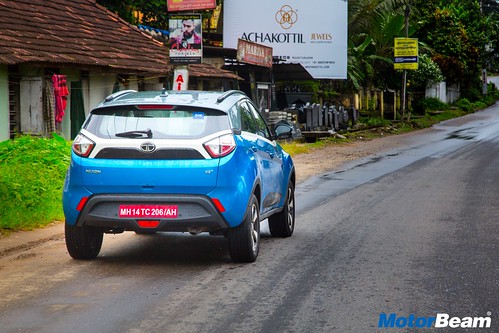 Driving Dynamics – The Tata Nexon comes with a dual path suspension and we must mention that it has been tuned very nicely. The suspension attacks potholes and bad roads with ease, without causing discomfort to passengers. The car remains pretty much stable even while going on broken patches at slightly higher speeds. The 16-inch tyres also have good grip levels. The steering is light at low speeds and weighs up nicely on the highways. It has decent feedback on offer and is pretty direct. Body roll isn’t much and I actually found the Nexon to be fun to drive. Braking power is good and ABS is standard across all variants.