The scooter segment has always been more focused on commuting rather than sheer riding pleasure. From mid-2017 onwards, Aprilia has completely changed the game. With the introduction of the Aprilia SR 150, this premium brand made itself not only more accessible but added an extra bit of thrill to one’s daily commute. The SR 150 is a very capable scooter and one of the best scooters according to me when it comes to sheer riding dynamics. So where does the SR 125 fit in and does it make any sense? Let’s find out.

Motor Quest: Aprilia has been making scooters since the early 1990’s. Their first scooter was a two-stroke, 125cc model called the Amico LK. In India, they made their debut with the SR 150 which was a completely alien approach for scooter buyers. However, the scooter was impressive in terms of dynamics and performance which made the RSV4 maker bring out a 125cc version of the same. 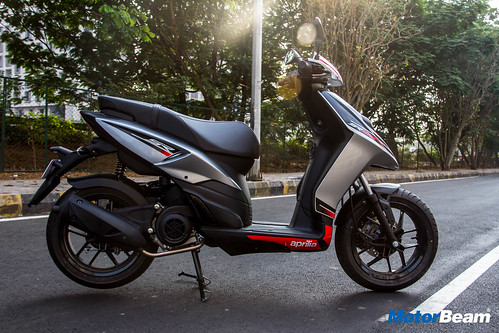 Styling  The Aprilia SR 125 looks exactly like its elder sibling, the SR 150. The only true difference comes in the options of color schemes, the absence of grab rails and the noticeably smaller engine. Apart from these minor changes, this is literally the same machine as the SR 150. It has the same design that seems to focus less on practicality and more on sportiness. There isn’t much to talk about the styling as the SR 125 resembles its elder brother in every way and shares a majority of parts with it. This, of course, is not a bad thing as this is a very handsome looking machine. 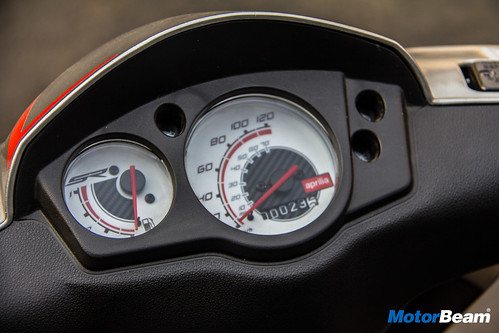 Instrument Cluster and Switchgear – This instrument cluster is again lifted from the SR 150. The analogue console gets a white background and a very basic setup. It has a speedometer (tells you both km/hr and mph), odometer and fuel gauge. Apart from this, there isn’t anything to talk about, so you know I wasn’t exaggerating when I called it basic. The switchgear is of good quality and the overall build quality feels great. 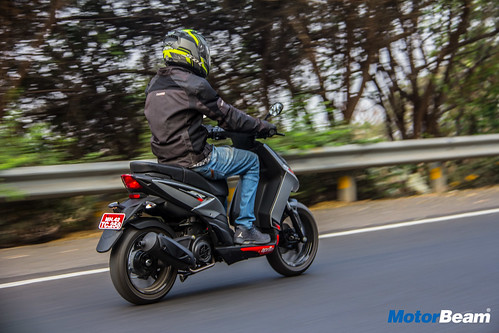 Ergonomics – I’m just going to ahead and put it out there, this isn’t a practical scooter at all. Practicality is something that isn’t its emphasis, instead, it’s about the way it looks. Now that’s fine with me but not for 125cc scooters, that are known for their blend of performance and practicality. Let’s start with the seats, they’re not that spacious and the scooped out front seat makes it feel cramped. The compound itself isn’t suitable for riding long distances. Next, the footboard is quite cramped too and doesn’t permit to place your feet wherever you’d like, as there isn’t much of an option. 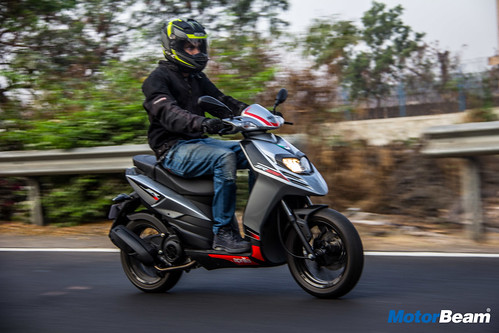 The absence of grab rails may look cool but it isn’t practical at all. Instead, this gets a rubber band between the front and rear, which seems to be there to help you lift the scooter on the main-stand instead of helping a pillion (neither of which it can do properly). The band feels loose and flimsy, it feels like it will tear off the bike and come straight in your hand if you pull too hard. I feel Aprilia should have thought this through given the fact that this scooter doesn’t have a side stand and the main-stand is the only way to park this machine. Unlike most 125cc scooters, this doesn’t get any additional storage space either. Sure you do get some under seat storage, but it’s not big enough to even fit a full-size helmet. This scooter also gets new mirrors which don’t offer the best of visibility.