Land Rover, under the ownership of Tata Motors is on a product onslaught, to the point where some cars have started to overlap in the company’s portfolio. The Range Rover lineup has been steadily increasing, now a four brand lineup with the flagship Range Rover and its sportier version, the Sport getting a mid-life facelift. In its latest avatar, the second generation Range Rover Sport looks even more appealing and gets updated with a host of features but is it still the sexiest Range Rover after the Velar’s launch? 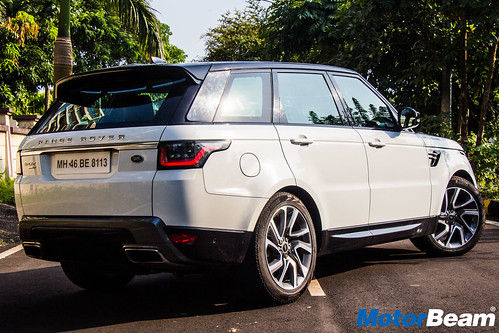 Exteriors – The Range Rover Sport is tightly packaged, looks splendid and the boxy design is carried out brilliantly. Massive 21-inch wheels adorn this beauty and with the ride height set to the lowest, it looks like a sports SUV from every angle. With revisions to the bumpers and the car getting updated LED lights, the higher variants getting full LED headlamps with Pixel LED adaptive beams (they can project up to half a km post 80 km/hr), this Range Rover does justify the Sport name in its appearance. 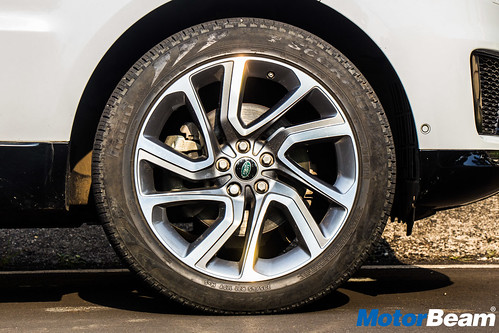 The Pixel LED headlights can project up to 500 metres, they are all LEDs

The LED lights are a party trick here, because they not only look splendid at night, they turn on one by one at first go, such a spectacle. Loads of gloss black finishing on the Range Rover Sport gives it that premium appearance, with the bumpers, pillars, rear spoiler and the roof too being finished in gloss black, the latter most results in the floating roof appearance. The rear features twin exhausts with a nice diffuser to reduce the visual bulk. At night, the outside rearview mirrors project the Range Rover Sport’s logo on the road, looks super cool. 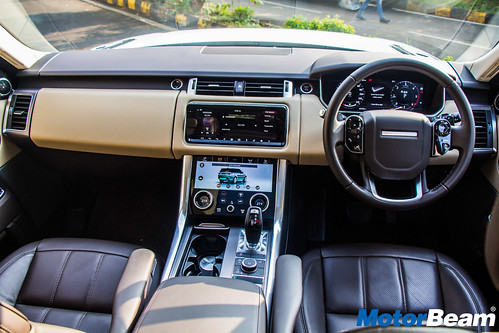 The dashboard is sporty with easy reach for all controls

Interiors – This is an SUV with considerable height but you need not worry at all when getting inside the Range Rover Sport because it gets a feature called ‘Auto Access Height’ which lowers the ride height by 50 mm for easier ingress and egress. The cabin looks sporty with great attention to detail and the quality of materials used is also very good. The big highlight in the facelifted model is the InControl Touch Pro Duo system which are twin 10-inch screens which first made their debut in the Velar. 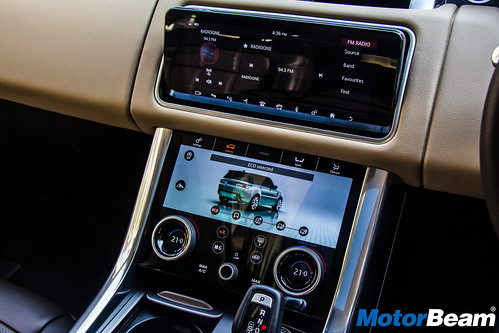 The upper screen is for infotainment while the lower screen is for the climate, car settings and also seat heating (3 settings for the same with ventilated seats being optional). Talking about options, the car can be equipped with 22-way adjustable driver seat (with massage function) heated steering, screens at the rear, gesture control for closing the sunroof sunblind (it auto closes when you exit the car) and you can opt for 23-speakers for the superb sounding Meridian audio system (lower variants get 13 or 19 speakers). The touch-screen is fluid but the software isn’t the quickest and the menu isn’t the easiest to navigate, it also, that too shockingly, misses out on Apple CarPlay and Android Auto connectivity. 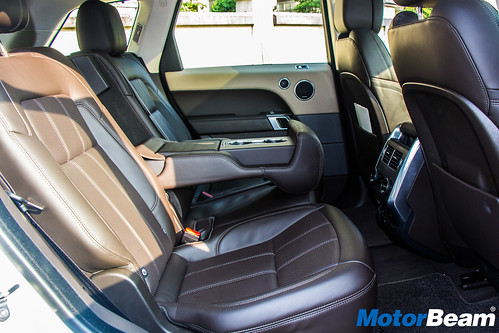 Attention to detail is impressive, the cabin feels sporty with a ton of features

Some standout features in the Range Rover Sport include soft door close (for the last 6 mm), powered tail gate and a cooled box under the arm rest (cools till 5-degrees). The facelifted model also gets touch buttons which are super cool, they light up the function when in use and the same button is used for multiple functions as well. There are literally no buttons on the centre console except two rotary knobs for the AC and one for the volume control. The 4-zone climate control works really well and also gets a mode which ionises and reduces allergens and bacteria. 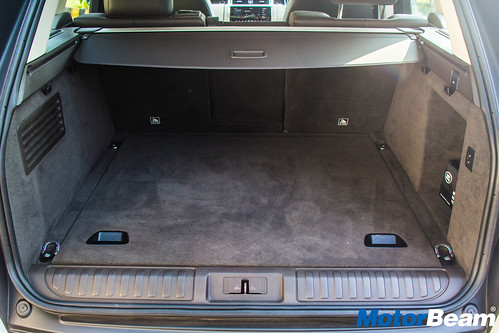 The Range Rover Sport’s seats are extremely comfortable, the rear ones too and with the flat floor, it means 5 people can comfortably sit inside the car (one can also opt for optional third row seats, making this car a make shift 7-seater). The rear seats have decent legroom and kneeroom with good under-thigh support and above average headroom. The centre armrest is huge and folds down with the headrest (the centre headrest isn’t adjustable). The boot isn’t huge but the Range Rover Sport gets a full-sized spare wheel with an alloy, bravo! The car gets a digital instrument cluster with a host of information on offer, it’s loaded to the gill and is so well equipped that you never need an HUD (it’s available as option though)! However, we still find Audi’s Virtual Cockpit better in the crispness of the display and the ease of use.