The Range Rover Velar’s USPs are its looks, modern tech and road presence

The Range Rover line-up has seen an interesting addition of vehicles in the portfolio such as the Evoque, Sport, Sport SVR, Vogue, Autobiography LWB, etc. The newest addition is the Range Rover Velar and incidentally, the Velar name was first used by Land Rover when they developed the initial most lot of Range Rover vehicles between 1969-1970. Velar stands for veil or cover and this name was used back in the day to register pre-production Range Rovers when they first came out. Today, though, the Range Rover Velar is an all-new luxury SUV and in the past many months, it has generated so much hype that the automotive world has been going gaga over this car. But does the Velar really justify all this brouhaha?

Motor Quest: The Range Rover Velar has been launched to fill the void between the Range Rover Evoque and the Range Rover Sport. However, it uses the same lightweight aluminium architecture that also underpins the Jaguar F-Pace. In India, the vehicle is offered with 1 petrol and 2 diesel engines and comes with as many as 25 variants on offer! 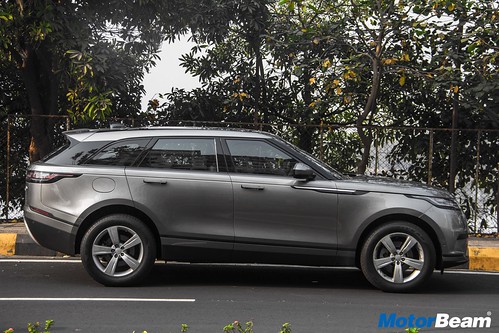 The Range Rover Velar looks exquisite and oozes with class

Exteriors – The Range Rover Velar is just too stylish. The front end looks smooth and the typical Range Rover face gets some modern elements. The stance is very imposing and the body frame is also quite large and wide. The rear looks different from the regular Sport and Vogue variants and is full of character. The door handles are pretty cool, and they come out when you unlock the car and then go inside the door when you lock it, blending perfectly with the body line. While the Grey shade on our test car looks quite killer, I personally found the alloys to be unexciting and I guess a darker shade would’ve looked way better. 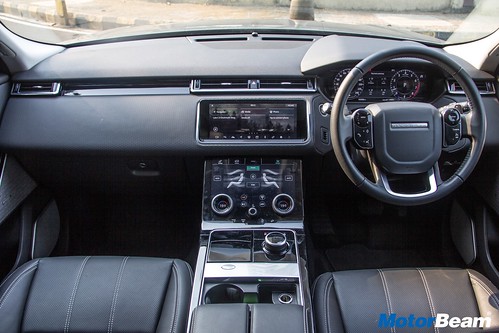 JLR has infused so much technology in the Velar

Interiors – The dashboard’s styling is more or less similar to that of other Range Rovers but what’s new is the 2 touchscreen panel on the centre console and of course the very cool touch buttons on the steering wheels. Our test car had all black interiors which certainly looked good. The steering wheel continues to bear the same design but it doesn’t have physical buttons, it has a touch panel on which the music, phone, cruise control and other buttons light up. When you get a call on your phone, the music buttons switch to answer/reject buttons which again looks pretty cool. The instrument cluster houses a large screen which shows a variety of information right from driving statistics, fuel consumption data, music and vehicle settings. 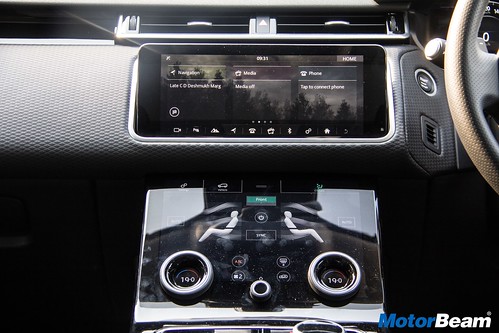 The top screen on the centre console is for the infotainment system. It is a tiltable screen and you can set the angle according to your needs. The audio system is a Meridian 825-Watts unit with 17 speakers and the sound is crystal clear. It also gets an Interactive Driver display while an HUD and rear seat entertainment are optional. The top screen is used for audio controls and navigation while the bottom screen is used for driving modes and AC controls. This 2-screen arrangement looks unique and lends a very modern feel to the Velar. It takes some time getting used to initially though. 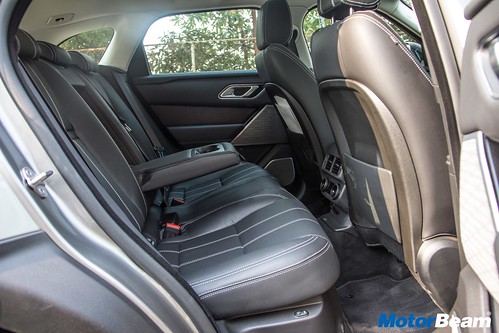 Space in the cabin is just about decent

There are a good amount of storage spaces on the inside and charging sockets are aplenty too. The front seats are electrically adjustable and are placed at a good height, offering a nice field of view outside. The seats have good cushioning, under thigh support and lumbar support. The rear seat is good enough for 2 passengers only and at the most, you might be able to fit in a kid at the centre. The windows aren’t too big but the Velar gets an optional full glass roof which lends an airy feel to the cabin. The boot isn’t very big too but takes in a decent amount of luggage. Thankfully, JLR is providing a full size spare wheel as standard on the Velar.