With charming looks, feature-loaded interiors & punchy performance, the Ford Figo is the best hatchback in its segment

The current generation Ford Figo was launched in the Indian market in 2015 and it even spawned a compact sedan version called the Aspire. While the Figo came across as a fun to drive and value-for-money offering, what lead things against its favour was the laid back 1.2 petrol engine, lack of features, the rather basic appeal of the interiors and the simplistic looks at a time when rivals were coming up with flashy designs, loaded interiors and more oomph. Ford solved this issue with the Aspire a few months back by launching a mid-life update with significant enhancements, this time it is the Figo’s turn to get its fair share of make-up, more technology and better performing petrol engines. 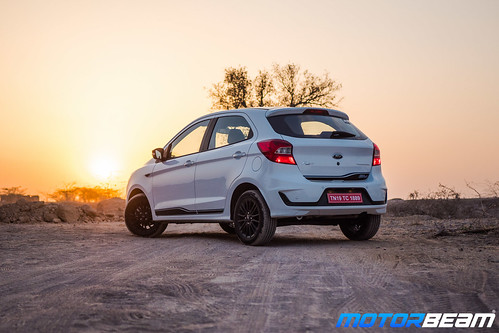 Changes on the outside are quite evident, making the Figo a better looker 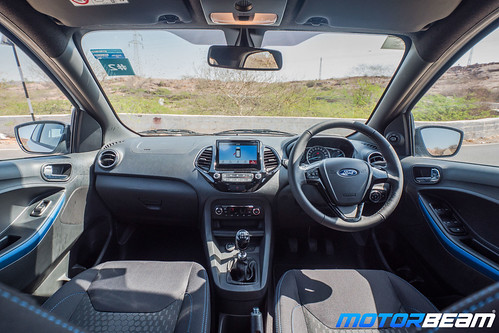 The dashboard design remains the same, but with far lesser buttons

Interiors – The layout of the cabin remains the same as before but what has changed is the colour scheme of the interior and the equipment list. The dashboard now gets an all-black colour theme, unlike the outgoing car which had grey interiors. With the black interior, there is some sort of differentiation between this and the Aspire because the latter gets dual tone black/beige interiors. The Titanium BLU variant also gets blue coloured inserts on the door pads and blue stitching on the upholstery. 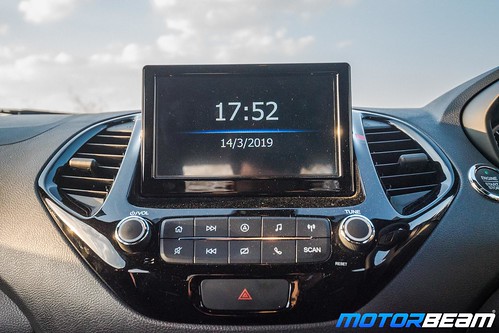 The cabin gets an all-black colour scheme & is feature-equipped

The Ford Figo now comes with a touchscreen infotainment system but misses out on SYNC3 which is offered on the Freestyle and Aspire. It also doesn’t get Apple CarPlay and Android Auto. The UI is easy to navigate but the display doesn’t feel as rich or crisp as the one on the Figo’s siblings. The sound quality from the stock speakers is just about decent. The vehicle also comes with a push-start button, electrically adjustable and folding ORVMs, automatic day/night IRVM, rain-sensing wipers and auto headlamps. The AC cools the cabin in a jiffy and works well in India’s hot conditions. The Figo comes with 1 USB port and it even gets a reverse parking camera with parking sensors. The Figo misses out on keyless go and an electromagnetic boot opener, hence you either need to press the button on the dashboard or use the key/remote to open the boot. 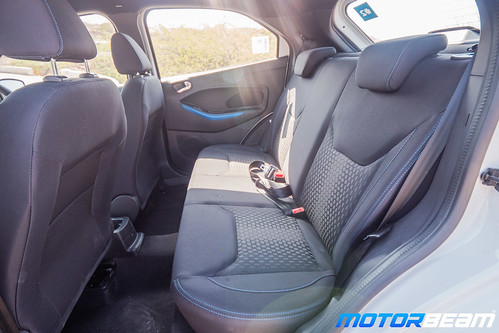 The front seats offer decent comfort and support. Finding a good driving position is fairly easy but the steering misses out on telescopic adjustment. Space at the rear is also pretty good, both knee room and headroom. However, the width of the car doesn’t allow you to fit 3 passengers at the rear, it is at best a 4-seater and you can probably squeeze in a kid. The Figo comes with 2 adjustable headrests at the rear. Unlike the Aspire, the Figo misses out on a rear centre armrest. While storage spaces are available aplenty at the front, you get limited storage space at the rear. The rear doors don’t have bottle holders and rear passengers have to make do with only 1 cupholder which is placed between the front seats. The boot is quite compact at 257-litres.

2015 Ford Figo Spotted Testing In India For The First Time