The MPV segment in India has slowly started to stand taller and taller. Until a few months back, we just had two players dominating, the Maruti Ertiga at the lower end and the Toyota Innova at the higher end of the price spectrum. Now though, we have the Mahindra Marazzo which has been priced consciously between the Ertiga and the Innova Crysta and the Mahindra MPV has been received quite well by the Indian audience but that shouldn’t let us not look at the fact that there is still no proper rival to the Toyota Innova Crysta. Talking of which, the car we’re sampling today could just be that. Ladies and gentlemen say hello to the Kia Carnival.

Motor Quest: The Kia Carnival was showcased at the Auto Expo last year and is currently in its third generation avatar. The full-size MPV is available only in front wheel drive configuration and is also sold as the Sedona and Grand Carnival in some international markets. 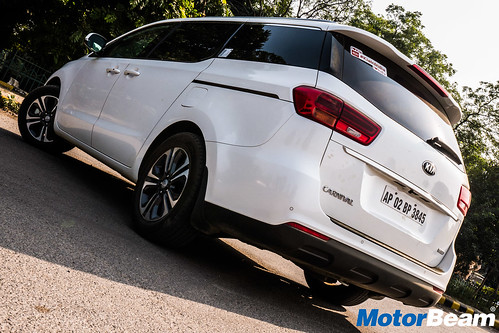 In terms of size, the Kia Carnival is longer and wider than the Innova

Exteriors – In terms of looks, the Kia Carnival will come across as a modern, sophisticated and an urban MPV. The front fascia looks purposeful with the brand’s customary ‘Tiger Nose’ grille and the hi-tech projector headlights with LED DRLs. At the side is where the MPV design traits start becoming more prominent with the sheer length and the large windows. However, there’s a unique touch here that prospective Innova buyers would like, the sliding rear doors. They not only make the ingress and egress comfortable but at the press of a button they automatically slide in or out, so less effort there! The rear end looks smart as well as sporty courtesy those LED tail-lights and roof mounted spoiler. 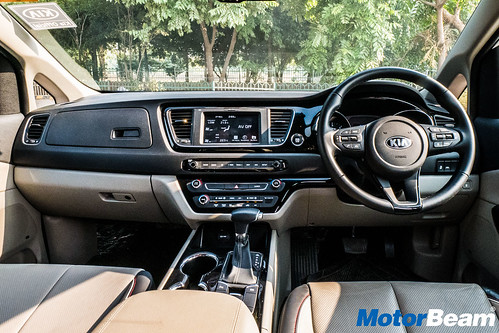 The cabin of the MPV is smartly laid-out, good-quality materials used

Interiors – Get inside the Kia Carnival and what you will immediately appreciate is the sense of space. The cabin is made with good quality materials and the piano black inserts on the dashboard, steering wheel and the door pads uplift the premium appeal of the car. The 3-spoke multi-function steering wheel is identical to other Kia cars we’ve driven before but the instrument console with a MID display in between looks a tad bit sportier. Taking centre stage in the cabin of the MPV is an 8-inch touchscreen infotainment system with all sorts of smartphone connectivity options along with navigation. Our test car was specced with a host of features like cruise control, engine start/stop, passive entry, voice commands, automatic climate control, roof-mounted AC vents in all rows, heated and ventilated front seats and electrically foldable and adjustable ORVMs. 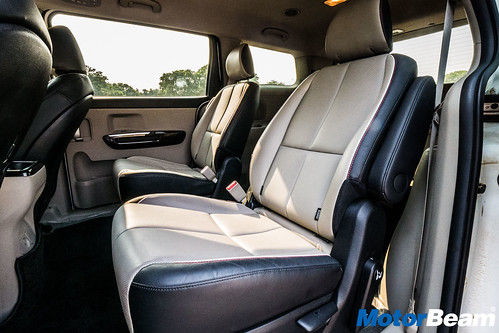 Unlike the Innova, the Kia Carnival is a very practical MPV which has space for the occupants and all their luggage

The space on offer is plenty. The front and second row seats are comfortable and there’s enough under-thigh support, leg room, headroom and shoulder room. The third-row seats are reasonably comfortable but lack under-thigh support, still there is enough room for adults here. We were a tad bit skeptical about the roof-mounted AC vents but they do their job very well, they chill the entire cabin in no time. The boot space even with the third-row of seats up is very huge and in case you have some house moving duties, fold down the second row of seats and you get access to 2220-litres of cargo space!